How to Prevent 3D Printing Layer Shifting – Easy to Do Techniques

With nuances of advantages associated with 3D printing, there come few challenges as well. The ones that are frustrating to tackle and could even lead to failed prints.

One such problem which isn’t much discussed is the 3D printing layer shifting issue. The problem is serious and often referred to as the ‘staircase effect’.

In such a scenario, the layers start shifting and the final object tilts or even collapse turning to a completely distorted model from what was a precise print in the beginning.

Users who have faced this problem would know the pain it entails. A 3D model, printing perfectly for a few minutes, ultimately leaves the right track and stops aligning properly.

The damages are huge and the entire effort is wasted too. Hence, it is important to know the cause and the fixes for the same. Or else, it would become difficult to handle the prints later.

What is 3D Printing Layer Shifting?

Before we explain the reason, let us get a brief idea of what it is. And, what it is capable of doing. As the name suggests, layer shifting results in improper alignment of layers.

With the problem, the staggering look comes handy, destroying the entire print. The look is defined similarly to that of a staircase, hence, also termed as ‘staircase effect’.

The problem is usually found happening in certain sites of the model. However, it does destroy the entire look of the 3D print.

The frustration is at the highest peak when watching half of the model printed perfect and the rest altered because of layer shifting.

The only question that pops that point of time: Why so late during the print? After wasting so much time, it feels so irritating to discard the entire print.

The problem could be minor with few-layer shifts leading to glitched and distorted models. Or, would be major when the extruder would be seen printing in mid-air and leaving streaks of plastic. In either case, the model cannot be utilized anyway.

There could be various reasons for this to happen. The most usual one is when the print head collides with something in the way.

This could be anything, blocking the way of the print head such as the piled-up plastic on the printer’s part. The print head could hit this plastic pile and result in layer shifting.

Another reason could be the incompetent motor not able to cope up with the printer’s desirable speed. It may happen that the motor is not able to move as fast as the printer is trying to print.

The printer tries to cover the non-printing space with its fastest speed. This is when the problem may arise in the middle of the print. You can manage the same by changing the speed settings. In other words, reducing the print speed.

You may also fall in trap with the endstop problem. In such a case, an end-stop is triggered at the wrong time while the print is in progress.

This causes the printer to incorrectly set the 0 positions and the entire setting is manipulated accordingly. The prints shift according to the false endpoint.

The major reason for this to happen is the loose connection on the end-stop switches. These are the NC switches, which can be thought of as being triggered whenever there is a break in the circuit. the printer will think that the switch is being triggered.

Once again, it’s the bad rhythm between your printer and the motor acceleration speed. This occurs when the printer tries to accelerate too fast.

Because of high acceleration, the force required by the motor also increases. Hence, the motor is unable to provide enough torque. In such a case, it will skip steps.

Mechanical issues could also lead to the problem. The issue could be with your motors, belts, or even sprockets. Either the belts aren’t perfectly tensioned ultimately skipping teeth on the pulleys.

Or, if the tightness of the set screw placed on your motor pulley isn’t proper, it could mess things up by keep spinning on the motor shaft.

Last but not least. The overheated motors drivers can also make things worse. You would notice motors briefly taking pauses.

Motors do this to allow momentarily cooling. If the printing keeps continuing, the matter would even get to the worst situation. Hence, causing the 3d printing layer shifting problem.

How to Tackle Layer Shifting?

As far as the problem is concerned, we have already covered almost everything that can lead to layer shifting. However, what about the solution? The question is: How can we fix the issue or reduce its probability of occurrence?

Here are a few things that you can follow for avoiding the problem. In case encountered, you can still carry these steps to ensure it doesn’t happen with the next print.

Timely Maintenance of Belts and Pulleys 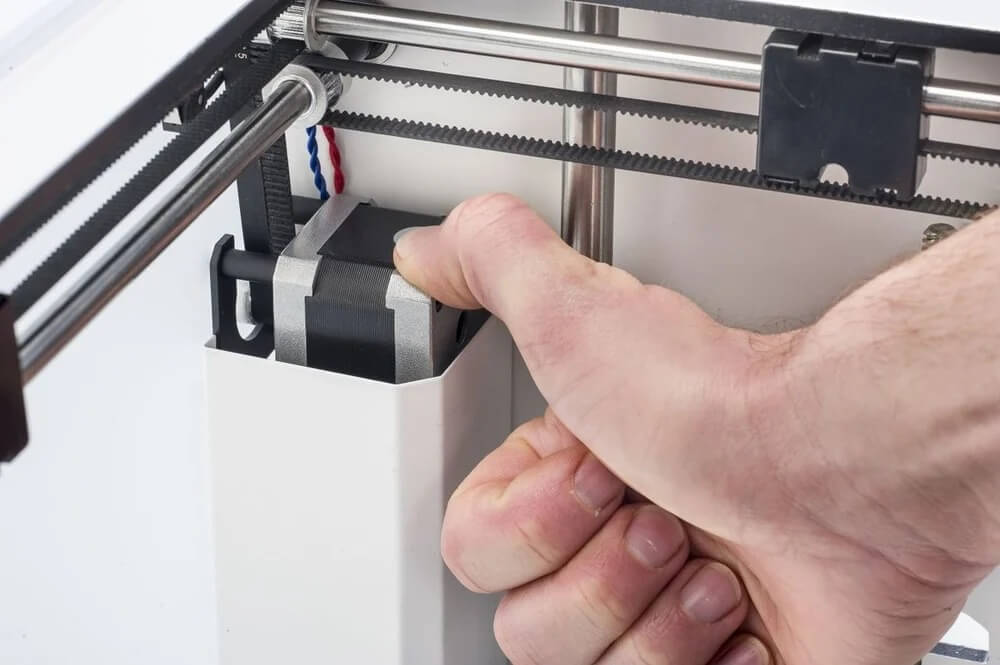 Layer shifting is an ultimatum that the 3D printer is working for long without maintenance. It is an indication that the printer needs a bit of care before it starts working on the next project.

A lot of times, only by repeating these steps every time after a few completed prints, would also help avoid the issue for good.

3D printers are also machines that work on certain mechanical parts that are prone to degrade with time. Also, over time, the running components such as pulleys and belts loosened. This results in slippage and further giving way for shifted layers.

By following the below steps, you can ensure that the components are working perfectly and are intact.

The belts that the printer used for the motion system stretch after prolonged use. Hence, our job is to ensure that the tension is maintained as required for the best results.

This can be checked by slightly pulling the belts to feel the twang. If the belts seem too loose, you may use the printer’s built-in belt tensioners to adjust the settings.

However, few printers do not have such a thing. In that case, you can even print your own tensioner or can also choose to replace the belts with new ones.

The pulleys are the toothed metal pieces that are on the motor of the printer in contact with the belts.

These are used for making sure that the screws are helping properly in place and the pulleys do not slip. Hence, maintaining a balance to get users the best print results. While maintenance, you must check these too for their tightness.

Let us check a step by step process to complete the maintenance after layer shifting occurs.

Regular maintenance would avoid the problem completely. However, if not, there are other things that you can do to solve the 3D printing layer shifting.

If you think that it is the endstop issue discussed before in the article, you can fix it too. Ensure that the wires from the endstop switches that connect back to the motherboard are securely plugged and aren’t loose. Doing so would keep checking the problem if it is at all because of the endstop triggering.

Ensure There Isn’t any Collision

We have already discussed it before, the print head may collide with the model being printed to cause layer shifting.

Printers usually aren’t equipped to detect these collisions. Hence, they keep continuing to print without realizing the problem.

If you feel the issue is creating problems with your printed models, you can carry these steps to get through the problem.

The first step must be lowering the travel speed of your print head. Hence, it would not recklessly bump into the models being printed after completing travel moves.

Moreover, a small tinkering with the slicing software would further help sustain the best results of the models.

To do this, adding a Z-hop that helps lift the print head before it covers the non-extruding path, does make difference in the problem and correct it to ensure seamless extrusion.

This setting is very helpful in avoiding mishaps and resulting in prints without layer shifting problems. 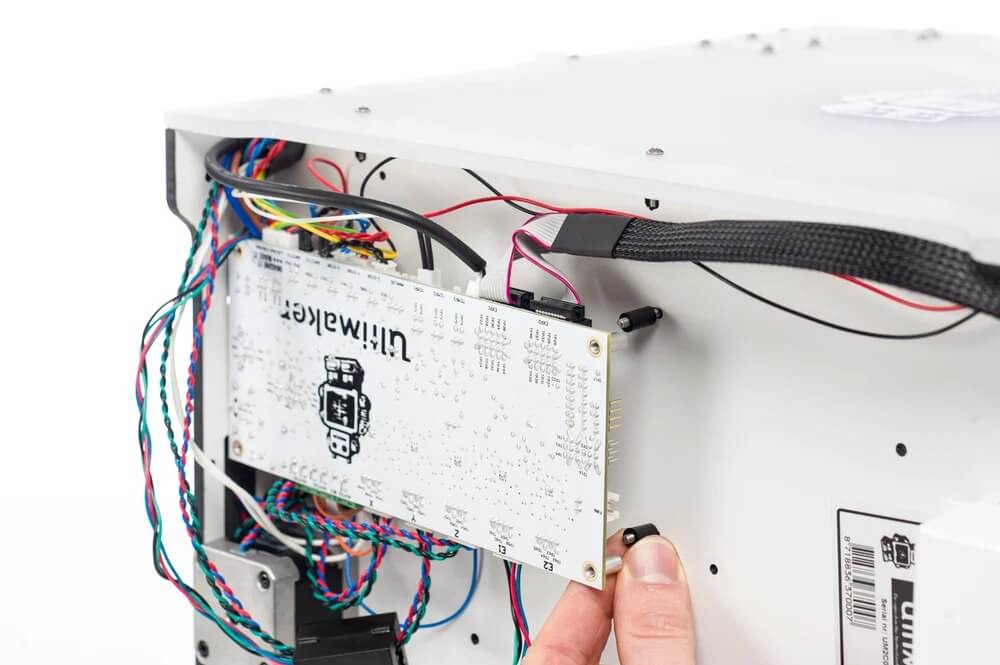 It is very unlikely, however, it may happen that the above resolutions won’t work. But that is nothing to worry about. It could be just because of the overheated electronics and extra work that you have been taking from your 3D printer.

To be precise, the stepper drivers are responsible for controlling the motion of the motors. In case, they are overheated or overworked, these can create hiccups during the printer’s movements, further resulting in layer shifting.

There is nothing much you need to do in such cases. All you require is to ensure that the printer’s motherboard ventilation grills aren’t jammed. You can even try placing a cooling desktop fan close to your printer’s electronics in order to cool them down.

3D printing isn’t just about feeding the material and sharing the 3D design. It is more than that. There are so many ups and downs related to technology.

If it’s working fine, you would find it the easiest possible routine to carry. However, if it does not, it would seem highly difficult to tackle even the smallest problem.

Hence, it is important to understand the basic design of the 3D printer you are working with. And, how to carry maintenance and other smaller bug fixes on your own.

You may not be able to call someone to help you every other time you run into an issue. Problems like 3D printing layer shifting are one of the rare issues that users come across.

Hence, very few talks about it. However, the problem is really serious and annoying. Hence, you must take action when necessary. Most of the time, you would be able to fix the problem by just tightening a few screws.

How to Get Rid of Elephant Foot 3D Printing?