We all know that HP is not a company that started with 3D printing technology. They were a company that was totally focused on the electronics and hardware market.

A little more visible freedom in the company’s focus came in the year 2015, with their announcement of entering the additive manufacturing and 3D printing industry came.

The announcement further stated to have launched their first HP 3D printers in 2016.

What HP did eccentrically while launching their first 3D printer was basing their printers on their own patented technology, known as Multi Jet Fusion.

And do not let your mind blast with questions, because in this article we are going to focus a little bit on that technology as well.

But first about HP and its journey in the field of 3D printing, in general.

The latter was build based on the company’s experience with the first two ones.

It was offering a lower cost per part at higher speeds which was the necessity of that time.

A little peek on the company’s website told us how the company currently has Jet Fusion Series 5200 and 500 or 300 series apart from what we have already discussed.

Overview of the company

From the many resources that HP has, it some of it into leveraging 3D printing technology for mainstream manufacturing.

By what is called the world’s first state of the art laboratory technology, Multi Jet Fusion, the company is helping other companies develop their 3D parts and functional prototypes which has applications in various industries.

For doing this, HP also has a 3D printing center in Guangdong, China.

This center puts HP at the epicenter of the world’s US$12 trillion manufacturing sector which shows HP’s commitment to the 3D printing market.

Recently the company’s CEO Enrique Lores commenting on the pandemic situation pointed out how the COVID-19 pandemic has shined a light on the importance of having the capability to quickly manufacture products onsite.

Quoting him exactly, he said, “It is really highlighting how 3-D printing has the potential of transforming the manufacturing industry. This is a great example of its capabilities.” 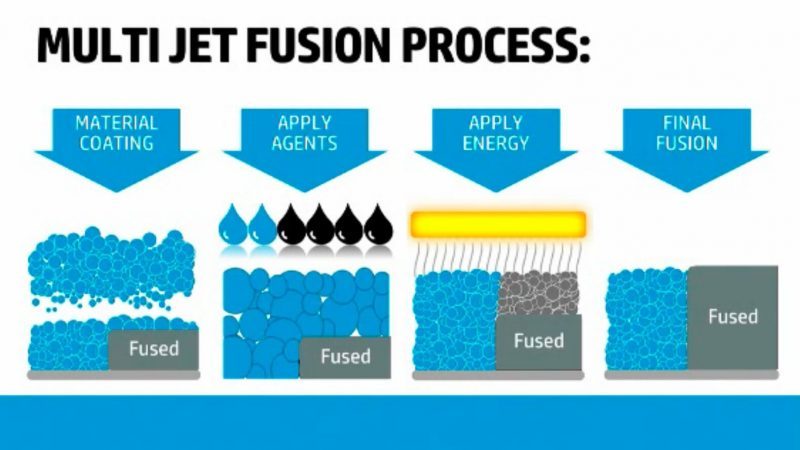 This technology is also categorized into the powder bed fusion family, in the same class of technologies as Selective Laser Sintering.

But the difference between both these technologies is that the former does not use Laser for producing part or functional prototypes, while the latter does.

A similarity between the former and latter is that both use the material called PA 12 and both of these processes are similar to the Binder Jetting technology in which, a bed of material is selectively fused together through the addition of a binding agent.

While the Multi Jet Fusion printing process starts, there is a layer of powder that is fused together using a fusing agent.

After that, the work is done by a heat source for one layer, which is then repeated, layer by layer, for creating the final part.

By using Multi Jet Fusion technology, you can do the production of multiple parts simultaneously, quickly, by obtaining an accuracy of up to 80 microns.

Stepwise explanation of this process 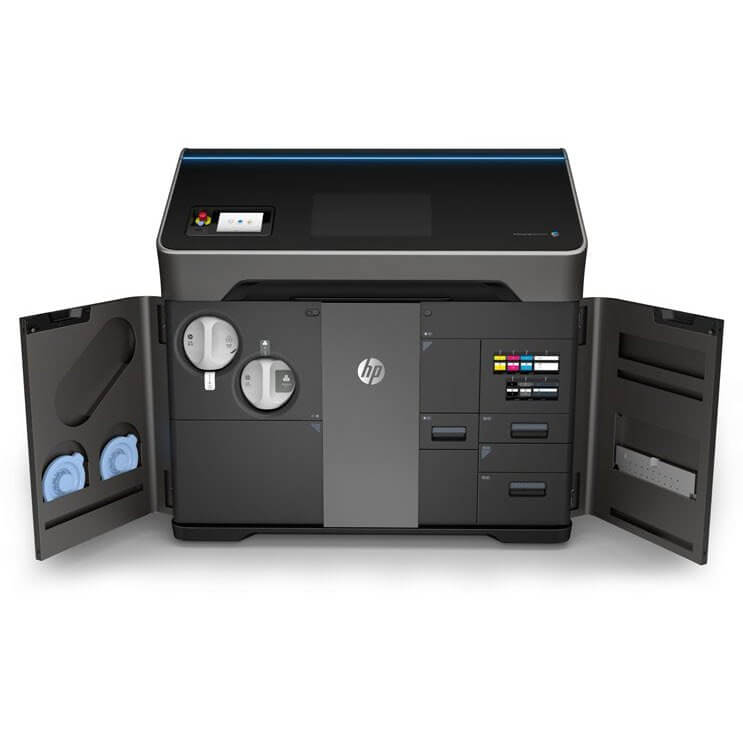 Similar to the company’s offering i.e. Jet Fusion 380, this one is also focused on creating polychrome functional parts from the polyamide material i.e. PA12.

Although some of the features of the Jet Fusion 580 is that it can print full-color parts while maintaining the mechanical properties and quality of the parts.

As mentioned above the printer offers to print with Polyamide material. It is a plug and play type printer so it comes completely assembled. The size of this printer is 1565 mm * 955 mm * 1505 mm.

The weight of this HP 3D printer is 650 kg. HP Jet Fusion 580 offers a minimum layer thickness of 80 mm, which means that the parts and functional prototypes that will be manufactured by the printer would have a good surface finish.

Coming to the printing speed of this printer, numerically it is 2400 cubic centimeters per hour. 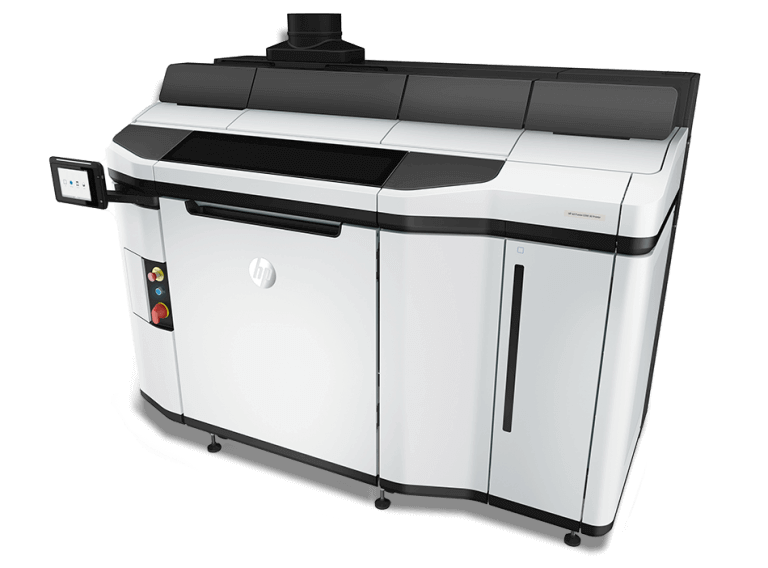 According to the announcements made by HP about this printer after its release, claims are that this printer will enable mass production of parts.

This is not only through rapid prototyping, but also through additive manufacturing (3D printing).

Although mass production is done by his printer would not be in terms of producing millions or billions of production parts.

Instead, the mass production would be in terms of hundreds, thousands, or tens of thousands of parts, as per the claims made by the company.

With the help of this 3D printer, they will be able to print electronics in the parts created through the use of conductive materials printed at the voxel level.

As we have a pixel in a display, a voxel in 3D printing means a tiny cube, millions of which make up a larger object.

This essentially means that the parts that are printed are fused together at a very small level which helps them achieve spectacular strength.

As we now know that this printer is built on the HP Multi Jet Fusion technology.

The minimum Layer thickness that is visible in all the parts or functional prototypes manufactured by this 3D printer is 0.08 mm (0.003 in).

The job processing resolution (x, y) and a print resolution of this printer is 1200 dpi. 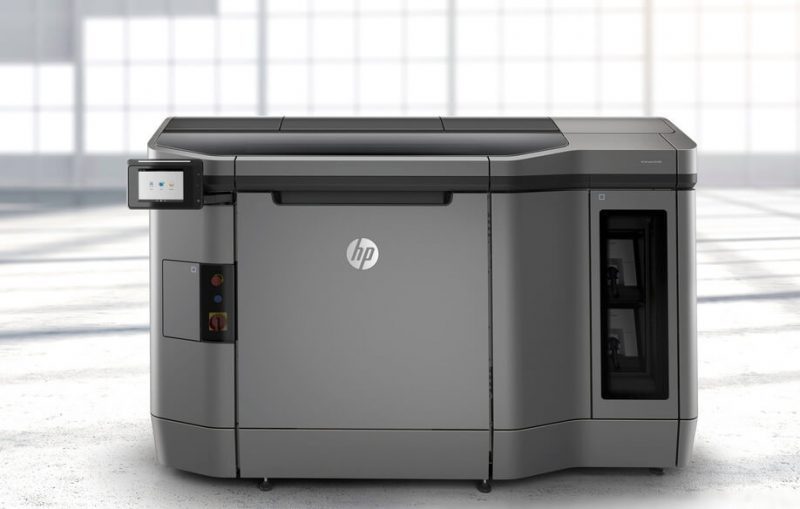 The Jet Fusion 3D 4200 is said to be one of the largest and most expensive 3D printers on the market.

In contradiction to the largest, what the printer essentially does is building a variety of small objects at the molecular level.

HP Jet Fusion 4200 creates functional pieces that not only look good but also can be used for a variety of purposes from prototypes to commercial items.

The cost of this printer is $268,000. Arguably, this is an expensive industrial printer, compared to other options, but the 4200 could help companies produce objects quickly and economically so the cost is justified.

The minimum layer thickness offered by the 3D printer is 70 to 120 microns.

The build rate of this printer is 4500 cubic centimeters per hour or 275 cubic inches per hour. It has a fully enclosed system that can be connected to via Wifi-Ethernet.

You can connect to this printer by using both the operating systems i.e. Mac as well as Windows.

The software recommended by the company for this printer is HP SmartStream 3D Command Center. The weight of this 3D printer is 730 kg.

The 4200’s touchscreen has the capacity to display eight icons at a time. This can enable you to complete tasks efficiently.

Tasks here ranging from Settings to Build Status. There is a light above the display for indicating the printer’s status.

When the light is solid and blinking white, it means the printer is ready and is preparing to start the build process.

While when the light is yellow, it means an error has occurred. And obviously, a red light indicates the device requires your attention.

If something goes wrong, there’s a large red Stop button on the printer.

This HP 3D printer uses Nylon 11 and 12 as well as a glass-bead-encapsulated Nylon 12 material which is more rigid than the two which are previously mentioned.

These raw materials come in 3-liter boxes and much of the unused material can be recycled.

HP 3D printers produce a sense of reliability which you do not get with other printers because HP being a reliable name in the electronics and hardware market.

So, when you turn your face onto HP, all you have got to ask is what is it that this company is offering apart from the trust that other companies fail to build with their customers?

And on asking them you find a fantastic build quality with huge build volume in all the parts and functional prototypes that you want to build with their printers.

Onshape (CAD): All You Need To Know to Get Started

Added to wishlistRemoved from wishlist 2