This printer has amazing build volume, is based on a very reliable 3D printing technology, prints in a fast manner, offers good variance in terms of layer resolution, and stays stable during the 3D printing process.

Designed for small batch production ranging between 130 to 600 parts per week, HP Jet Fusion 4200 is a very precise 3D printer. Based on multi-jet ...
Add to wishlistAdded to wishlistRemoved from wishlist 0
Add to compare
Check Price
HP

This large-format FFF system aims to cater to the large-scale printing needs of businesses for applications like signage, education, automotive, engineering, and manufacturing.

At the same time, it maintains portability with its relatively slender build. There are hardly any printer manufacturers that have a room or space to fit a 3D printer of 3.5 meters height or 2 meters in width. And that’s the main reason how Tractus 3D T2000 came into being.

The printer is capable of printing large volume prints and its design is also capable of fitting in every office. This nature of the printer makes it versatile.

T2000 is an ideal 3D printer for 3D printing large objects in an extremely accurate manner, having good temperature stability because of the fact that 3D printers have a closed chamber. And this minimizes the possibility of warping.

Huge build volume: Tractus 3D T2000 is the latest addition to the printer manufacturer’s Large Volume series. Its build chamber is capable of printing up to one meter in height and sixty-eight centimeters in diameter, all of which is packed in a much slender body that is two meters tall and eight two centimeters wide. The printer’s high body to body ratio is a point of pride because it comes with the claim that it can fit through every normal door. It has a net weight of 90 kilograms, which makes it portable for its size.

The fastest print head and high-temperature resisting nozzle as well as build plate: Tractus3D T2000 has the fastest print head in the world i.e. the F033L. It will enable you to have print speeds of up to 400 millimeters per second. The nozzle of this printer can withstand a temperature of 300 degrees Celsius which makes Tractus3D T2000 capable of extruding some of the tougher engineering thermoplastics such as ABS or PETG. Stating about the heated glass build plate, it has a maximum temperature of 110 degrees Celsius.

Automatic Bed Leveler: Before and after every 3D printing process the printer can self-level itself. You would not have to work out the exact measurements painstakingly to ensure that the printer prints the first layer of the part perfectly. And having sorted out this with automation the printer manufacturer has promised you a certain sort of precision in the part or functional prototype that you are making.

It offers a building width of 680 mm, a building height of 1000 mm, and a maximum print speed of 400 millimeters per second.

The resolutions in the X, Y, and Z-axis of this printer are 20 microns, 20 microns, and 50 microns respectively. The printer is able to offer a resolution range of:

The operating sound of Tractus 3D T2000 is around 40 decibels. You can connect to the printer via the Local Area Network.

There is a seven inches long color touchscreen that can be used by you as an interface to monitor as well as control different aspects of the printer.

It supports English, Dutch, French, and German. The monitoring of this printer can be done using the web interface.

Tractus 3D T2000 weighs 90 kilograms. The build plate material of this printer is a heated one that can resist temperature up to 110 degrees Celsius.

The feeder type of this printer is hardened steel geared and ready for composite materials. All of the nozzles can resist temperature up to 300 degrees Celsius and can get heated up within less than 90 seconds.

PLA, PRO1, PET-G, ABS, ASA, Facilan C8, TPU/TPE, Nylon, PC, and Fillers like wood fill are the printing materials that you can print parts and functional prototypes with. Their filament diameter should be 1.75 mm.

For knowing the exact price of this printer, you will have to fill the form and request for getting a quote, from the printer manufacturer.

They ask for your as well as your company’s details and get back to you on your email. 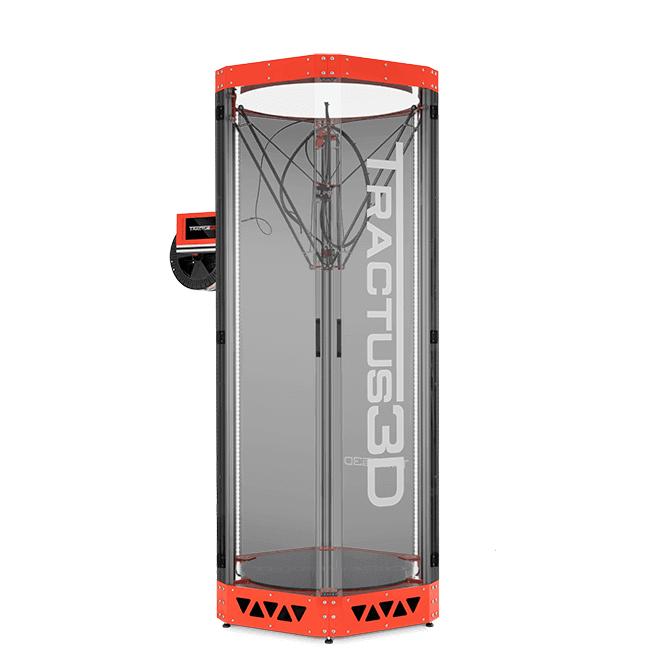 The Dutch manufacturer, Tractus, specializes in delta FFF systems. Here the location of the print head is controlled by three points that move up and down three rails that are fixed in a triangular formation around the print bed.

Not only Tractus 3D T2000 but also other printers cover all bases, from lost-cost desktop systems to large-format multi-meter machines, through high-temperature professional 3D printers.

The printers belonging to Tractus 3D’s Desk series are designed for creating small and detailed objects on a desktop.

These low-cost, easy-to-use machines are compact and low in weight, which makes them the most suitable for individual use.

There is Pro Series which is designed for extruding high-performance materials like PEEK and ULTEM that are known for their strength and resistance, requiring very high temperatures for working with.

The tallest machines in this series are capable of creating parts up to 2.1 meters in height which makes them a popular choice for businesses.

The printer comes completely assembled and is ready to be plugged and played. You are advised to go through the instruction manual that comes with the printer. Doing this will help you get familiar with the parts of the printer and their functionalities.

As mentioned in the features section of this article, the printer is equipped with an automatic bed leveling system, so before starting with your first print, do level your bed to ensure maximum precision while 3D printing a part or functional prototype.

All of these would take not more than five to ten minutes, including unwrapping the printer from the box it is shipped at your place in. And then you are good to go.

FDM 3D printing technology or FFF 3D printing is a method of additively manufacturing layers of materials, fusing them together in a pattern that can create an object.

The material which you are 3D printing is generally made to reach glass transition temperature and then extruded in a pattern next to or on top of previous extrusions, thereby creating an object layer by layer.

Putting it in an even simpler form, a typical FFF 3D printer, just like Tractus 3D T2000 takes a plastic filament and squeezes it through a hot end.

It then melts the squeeze and deposits it in layers as per the geometry of the 3D sliced file that is being fed to it, on the 3D print bed.

These layers are fused together building up throughout the complete print and eventually forming the finished part. 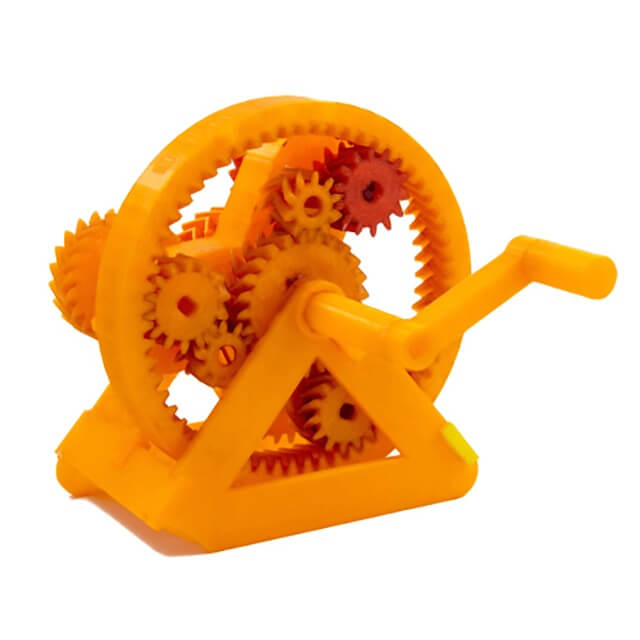 With various types of nozzles, you can print parts and functional prototypes of various layer heights. And the description of this is completely given in the specifications section of this article.

The parts and functional prototypes printed on this printer find their use in Signage and retail, education, automotive, as well as the manufacturing industry.

These industry segments appreciate and welcome the large volume printing that Tractus 3D T2000 is able to bring on to their tables as well as the quality of parts and functional prototypes.

The printer is capable of printing with various 3D printing materials up to various ranges of layer resolutions. 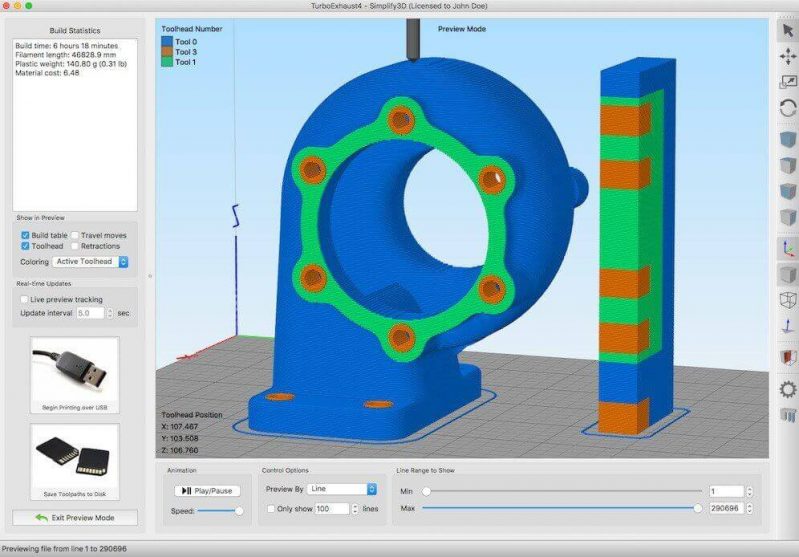 The printer comes with a license of Simplify 3D that can be used at max from two computers. It supports Mac operating system, Windows as well as Linux.

The file types this software is compatible with are; STL, OBJ, 3MF, JPG, and PNG. The printable formats using this software are G and G-CODE.

You have a warranty period of one year on this printer. Apart from that, there is complete support from the Tractus 3D support team or certified service partners or resellers.

You also get the free cleaning of print heads that excludes shipping costs, there is a discount on purchasing filaments and a fifty percent discount on new upgrades.

Below mentioned are some of the most driving factors for framing your buying decision. It’s basically the summary of this article, before its conclusion.

3D Printer Cost: For knowing the cost, you will have to ask for a quote from the Dutch manufacturer. In the form that you fill and submit to the manufacturer, you will have to enter the personal as well as your company’s details. Based on these details, the company will reach out to you on your email id.

3D Printer Quality: The printer is capable of manufacturing parts and functional prototypes with the quality that the general FDM 3D printer is able to provide. The distinction being, it can produce parts and functional prototypes with a lot of layer resolutions, starting anywhere from 50 microns, expanding to 1400 microns. This characteristic of Tractus 3D T2000 sets it apart from others.

3D Print Speed: 110 millimeters per second is an excellent print speed for a 3D printer like Tractus 3D T2000. It will let you manufacture many parts in a single day, depending on their geometry.

3D Printer Capability: In terms of 3D printing materials, there are many that Tractus T2000 allows you to play with. It also has a build plate and nozzle that can withstand high temperatures and hence decreasing the printing time.

3D Printer Practicality: The multilingual touch screen interface eases all your work out. It connects straightway to you in the simplest manner possible and gives you complete control and monitoring of this 3D printing system.

3D Printer User Expectations: All sorts of users can connect to this printer. Doesn’t matter if you are a beginner, intermediate, or an expert in the field of 3D printing technology! Your expectations in terms of playing with different materials, manufacturing in a faster manner, maintaining the print quality of parts or functional prototypes, will be taken care of by the printer.

The printer manufacturer successfully targets each and every section of individuals in the field of 3D printing by presenting Tractus 3D T2000 in front of the world.

If the cost is not a huge factor and you have already made up your mind for making a career in this field, you will find no barriers in connecting with this printer.

It is as capable as many other 3D printers that are capable of printing the level of parts and functional prototypes but are expensive. And this was the starting thought that led the Dutch manufacturer in developing Tractus T2000.

It has amazing build volume, is based on a very reliable 3D printing technology, prints in a fast manner, offers good variance in terms of layer resolution, and stays stable during the 3D printing process.