Nowadays, 3D printed buildings are getting popular and more common. 3D printing has made the building of complex structures simple and easy.

And, it does not take much time to complete the construction. An entire house can be printed in a few hours. This is not just an estimation, however, there are examples that prove the same.

Here in the article, we list 11 different 3D printed houses and buildings that have amazed everyone around the world.

As stated before, technology has made a lot of things possible that we never imagined before. One can now think of creating a house for oneself in a day’s time.

On top of that, at a much lower budget. Isn’t that something you will count as a huge development? 3D printers are not only limited to creating 3D floor plans. However, it can build an entire house.

So, let’s find out what the world is up to. Assess these examples below of the 3D printed buildings and gaze what the technology is capable of uncovering. 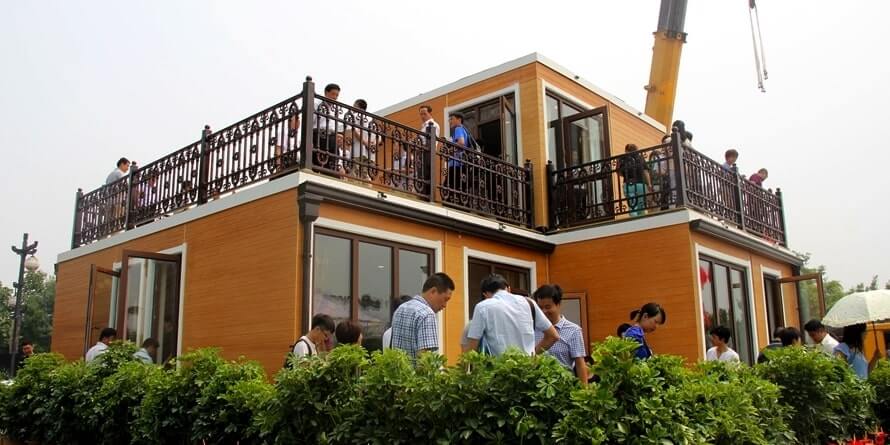 The example was set by the ZhuoDa Group, a construction company based out of China. The company was able to build a two-story villa in not more than 3 hours.

With the help of a huge 3D printer, the ZhuoDa Group was able to construct six different 3D printed modules. These modules can withstand an earthquake of up to 9 magnitudes.

As well as, these modules are also fireproof. The material was devised using industrial and agricultural waste. Hence, also contributing to the greener planet.

To build the complete house, the modules were fixed together. To complete the entire project, the company accomplished 90% of the job away from the site.

Later, they just shipped the modules to the installation site and plugged them together. Hence, being able to reduce the cost of construction considerably.

The entire project including installation took around 10 days to complete. 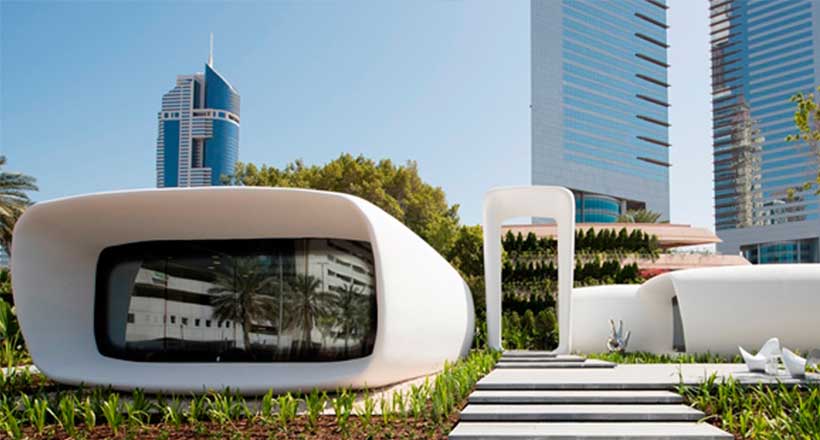 Another exquisite example that astonished almost everyone from the 3D printing community. The office in Dubai that started as a campaign to support 3D printing did end up with huge accomplishments.

The 3D printed building stands beautiful and has all the amenities that an office must-have.

The design flaunts an arc-shaped building for providing structural stability and safety. It also embodies the latest inclusions. For instance, designs to reduce energy consumption, along with sustainable management for information systems.

The building occupies a space of 2,700 Square feet costing the project $140,000. To create the building, various mobile 3D printers were used. 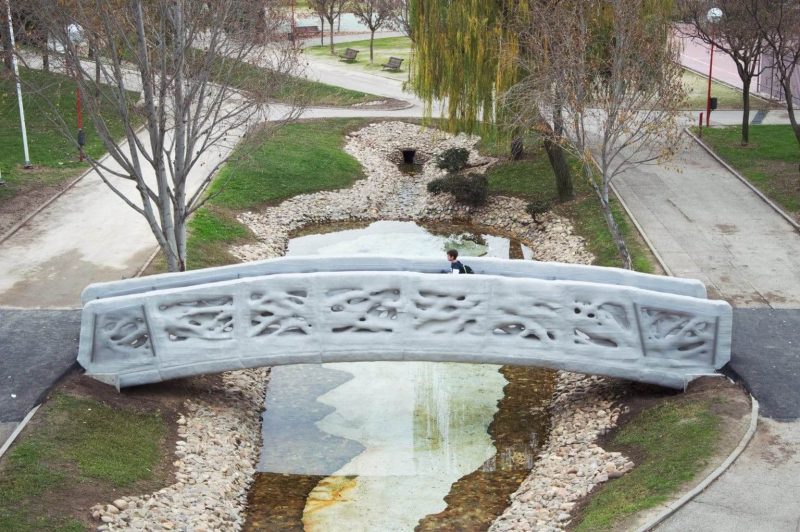 The bridge was constructed in the Castilla la Mancha park. Acciona is the name of the company that completed the work of the bridge in very little time making use of 3D printers. The bridge is 40 ft long and 7 ft wide.

To blend the look and feel of the bridge to that of the surrounding park, the company has made use of concrete to build the bridge. The work was completed in less time as well as costed much less than what it would have costed otherwise.

Looking at creativity, one can understand how amazing 3D printing technology is. And, what all it is capable of accomplishing.

3D Printed Building in the Netherlands 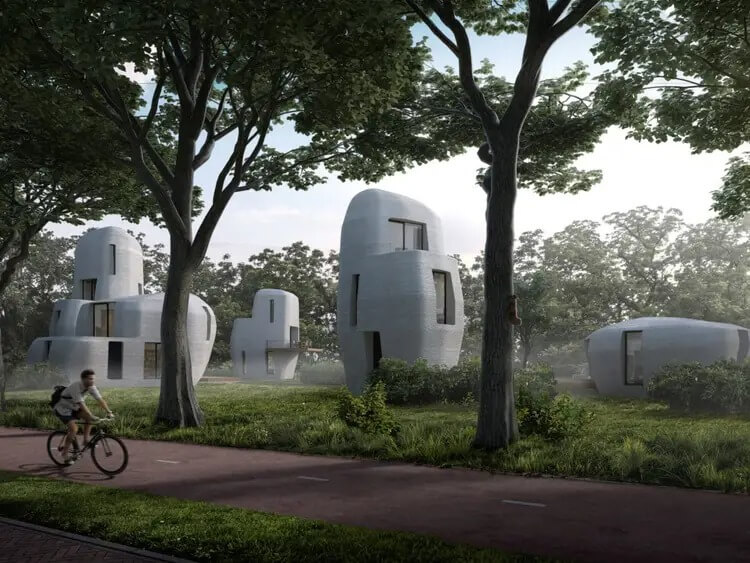 We have witnessed the European Union making unusual and stronger decisions many times already.

Hence, when the news about constructing a 3D printed building for gatherings during the presidency of the European Council came out, it did not shock us at all. The country is popular for taking innovative ideas to the next step. And, this wasn’t different at all.

The building design was the work of DUS Architects. The construction seems thoughtfully decorated. It has the shape of a sailing boat. You can feel the draping of the sail right on top of the 3D printed building. And, it does look mesmerizing.

Different companies contributed to the management and construction of the work including Actual, Neptunes, Henkel, and TenTech.

The building was created with the help of very large 3D printers based on FDM technology. The material was specially designed for this task using the bio-plastic.

The building, however, was dismantled in 2016. But those who were able to experience the architecture, do have sweet memories of walking through the marvelous design. 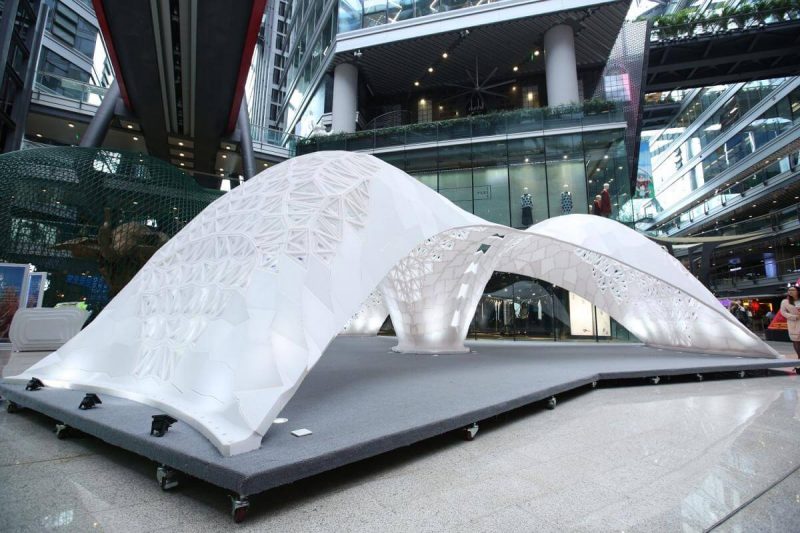 It feels so amusing to watch buildings with unique architecture. And, this one is no different. The pavilion built in Vélizy-Villacoublay is a real work of passion and art.

The design is very fresh and resembles the coffee beans. However, the interior of the pavilion gives one a feel of walking alongside trees.

The project was a joint work of the Dassault Systems with XTreeE, a startup in France. The 3D printed building was constructed using material developed by LafargeHolcim.

This is like cement, however, is 8 times stronger. To build the structure, the company took help from the Swiss brand ABB’s robots. This helped them in controlling the overall process by optimizing the material used for the exact amount.

In February 2019, 3D printing technology once again instilled its faith among the believers of the community. By referring to the DFAB HOUSE, you would know what we are pointing to.

This is the world’s first house to be built and designed digitally and being inhabited by humans.

This project was a call of professors at ETH Zurich. The professors collaborated with the industrial partners for making their plan stand out in real. Using robots alongside 3D printers, the 3D printed building was given the shape that they desired for.

This is not a small house but a complete three-story structure. And, it stands tall on the NEST platform. The building aims at exploring the greater possibilities covering 3D printed constructions and its energy-saving technologies in real-time.

Hence, giving more reasons to the builders for including 3D printers and the latest technologies as a part of their projects. The building occupies 200 square meters of space. 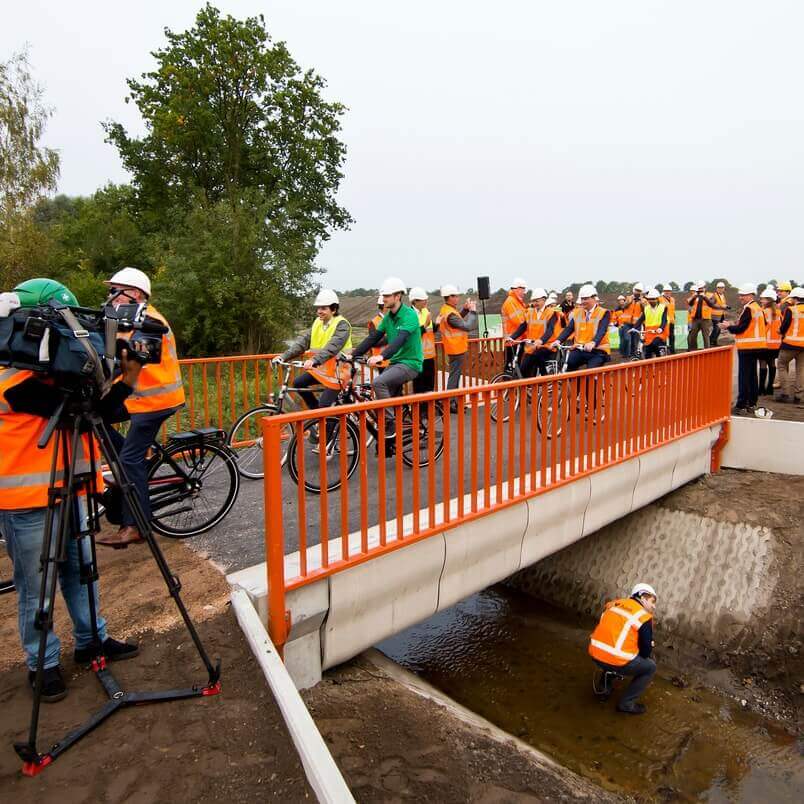 A 3.5 meters wide and 8 meters long bicycle bridge is one of the most fascinating architectural work you will witness. It is a joint work of the Technical University in Eindhoven and BAM, the UK construction company.

The bridge is constructed with the help of reinforced as well as pre-stressed concrete. The project took extra care for the safety of the riders.

Ensuring the bridge accommodates bikers with safety, the design is very well planned. The bridge is a combination of eight different parts. These were printed and stuck together using a concrete mortar.

The 3D printing was done offsite. And, the connection of the different parts was carried at the installation site. The bridge connects different towns of Gemert.

Talking about the material used, there are many benefits of the customized concrete mixture over the traditional ones. It embodies unique properties and enabling the construction with less waste.

3D printed buildings could solve a lot of issues such as excess waste creation, energy-inefficient solutions, and various others. Plus, these could be awesomely attractive too.

The stunning small castle is just the right example to prove the same. It sits in Minnesota is a work of Andrey Rudenko who is also the developer of the 3D Concrete House Printer.

Using the printer, Andrey created this amazing architectural building that takes us back to the fairy tales.

This became a huge hit right after coming in the news. It had curves and defined edges that surely proved that the 3D printer was capable of a lot of things. The design revealed the challenge and the technology did beat it with flying colors.

The 3D printer designed is able to create layers of concrete with a 10 mm height and 30 mm width. Hence, making it possible to print with finer details visible along with the layers of the building.

And, the work is applaudable considering the precision achieved for concrete construction. The project completed in 2014. Since then, it has been a motivational factor for many enthusiasts and makers who wish to delve into the wider space of architecture.

Talk about the exceptional result and this is what you should turn to. The initiate was taken by the architectural firm, SHoP.

The project aimed at creating the largest architectural example for the world using 3D printing technology. And, it was focused on putting the best possible design at work. The pavilion is constructed in Miami, Florida.

To make this project a success, SHoP together with ‘Drawn’, a French Company, contributed their best efforts together.

Those who do not know, Drawn has worked with Kuka in the past. Kuka is a robotic arm. It has an extrusion print head that is capable of accomplishing complex designs seamlessly.

The design proposed used bamboo-based material for creating sustainable pavilion. Plus, it showcased a 1,765 square feet design. This seems like a very promising project and it sure is. 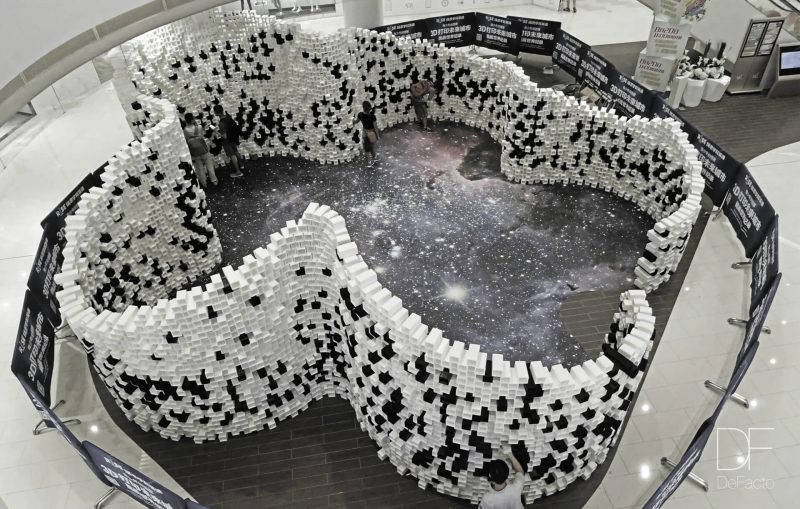 The project surfaced in 2016. Defacto thought about the plan and constructed the pavilion in Beijing, China. The pavilion was assembled using 5,370 pieces. These were called poly-blocks. The entire work was very astonishing and the results did confirm the same.

Using 70 different 3D printers, the company tool around 45 days for creating these pieces. With the use of biodegradable PolyPlus filament, and without any support, the design is highly sustainable, being able to minimize the waste.

However, the pavilion was soon dismantled after the end of the exhibition. However, the poly block design is still popular and people wish to use the same for creating vases and other products.

The 3D files are also available online. You can download the complete media kit from online repositories. So, if that interests you, you can certainly do that.

The house built by Apis cor in Russia occupies 400 square feet of space and is very well designed. You can locate the house sitting to the south of Moscow. This project was completed in 2017 and has been one of the most popular additions to the 3D printed building.

There is something different about this project that isn’t found usually. The entire project was completed onsite. The construction was done using concrete material. Because there was no involvement in transportation and installation, the project cost much less than expected.

Not just that, the complete house was printed in about 24 hours. In addition, mixing some solid elements with the liquid polyurethane, the company constructed heating insulation. And, this was also accomplished on-site.

The house was designed from the exterior and interior to provide it the finishing touch. Painted yellow from outside and flaunting the contemporary style design inside, the house did make us all go crazy.

It has wooden flooring. And, as stated by the company, the total cost for building the house was not more than $10,134.

We invest a lot in buying houses. And, it is not very often that we are able to customize the design of the house as per our will. But 3D printing provides us with more flexibility, not only with the style of house you would prefer but the budget as well.

There is already so much going around construction using 3D printers, it will be soon when we would be staying in 3D printed buildings. Although that still would take some time, we do know it is possible.

12 Coolest 3D Printed Gifts Ideas for all Celebration in [year]