An Independent dual extruder that runs independently offers BCN3D Epsilon W50 SC the ability to print two parts simultaneously. One can choose to ...
Add to wishlistAdded to wishlistRemoved from wishlist 0
Add to compare
Check Price
BCN3D

BCN3D is a leading 3D printer manufacturer based in Barcelona. The team of BCN3D believes in delivering high-quality products to professionals as well as industrial users.

In this article, we are going to share in-depth insights about BCN3D Epsilon W50 SC that will let you explore the printer via words before you get to actually see it or decide to see it as a safe buying option.

In fact, this article can also be used to compare two different 3D printers at the same price as BCN3D Epsilon W50 SC is and decide which one can be more preferred.

The attempt is to list down and explain all the features of this printer, specifications, print quality, pros and cons, and a lot more.

The printer comes equipped with features such as a passively heated chamber, independent dual extruders, humidity-controlled environment, and full enclosure.

These features enable the printer to deliver to its user quality and precision that is unmatched in the industry for the price the printer is available.

Bondtech Extruders and Filament Run Out Sensor: Bondtech Extruders are well-known in the market of 3D printing to offer more control, keen detailing, with high-tech dual drive gears that are known to deliver high-quality performance with any type of filament.

The filament run-out sensor that’s featured in this printer saves your printing failure and detects whenever the filament is finished.

The Epsilon series of BCN3D printers come with a heated bed that can withstand 120 degrees Celsius which the printer manufacturer has designed keeping in mind engineering-grade materials and avoiding warping issues.

Multilingual five-inches long touchscreen and Aluminum Frame: BCN3D has kept the body of the printer stable as well as interactive. To offer all its users a sturdy frame that does not vibrate while the 3D printing process is going on, the printer manufacturer has used an Aluminum made the frame in its printer.

Whereas to increase interaction between the user and the printer, BCN3D has kept a five-inch long touchscreen that can display information in eight languages. So, you do not have to turn up to anything else for guidance, when wanting to learn about the advanced features of this printer.

Safety Pause, HEPA, as well as Carbon Filter: To ensure the safety of the environment in which the printer is placed, the company has programmed it to pause itself whenever the door of this printer is opened.

Epsilon series of printers by BCN3D is equipped with a HEPA filter that protects the printer’s working environment from interacting with harmful particles while you are building parts or functional prototypes using industrial materials.

Carbon filters are installed in the printer to make sure this printer shields the environment from harmful fumes that are produced by the filaments used in 3D printing.

The silica gel inside the storage chamber of the printer absorbs most moisture from the air, making it a perfect environment to store filament spools.

After the silica becomes saturated, it is isolated from the filament materials and gets heated up to the point where it releases moisture, cleansing it out of the system.

It is this process that keeps the filaments used for 3D printing parts and functional prototypes in a dry and optimal condition to use.

Uninterruptible Power Supply and a complete working station: The system associated with this printer provides two minutes of additional print time even after a complete blackout of electricity happens. And once the power is back, you’d be able to resume 3D printing parts and functional prototypes from the last position.

There is a tool drawer inside BCN3D Epsilon W50 SC where you can keep every utensil you might need in the complete process of 3D printing.

In fact, there is an extra space where your laptop or tablet can be accommodated.

Printing in five different modes: BCN3D Epsilon W50 SC is based on the disruptive Independent Dual Extrusion System technology that allows the user of the printer to operate it in four different modes, apart from the single-mode.

It has a passively heated chamber that is fully enclosed and has a safety pause feature.

The air quality is filtered with category H13 HEPA filter, and active carbon filter. There are five modes in which BCN3D Epsilon W50 SC can print, they are:

The firmware of this 3D printer is built by BCN3D Embedded Linux distribution and BCN3D Epsilon-Marlin.

The printer’s heated bed is made up of Silicon thermal pad, and for user interaction, manufacturers of this printer have placed a five-inches long capacitive touchscreen that displays information in the following languages: a) Spanish, b) English, c) German, d) French, e) Italian, f) Japanese, g) Portuguese, and h) Chinese.

You can connect to the printer using an SD card, as well as Wi-fi or Ethernet.

The diameter of filament that can be used with this printer needs to be 0.05 mm around 2.85 mm.

The layer height resolution range offered in parts and functional prototypes printed using this printer is 0.05 mm to 0.5 mm.

Whereas the positioning resolution in the X, Y, and Z-axis is 1.25, 1.25, and 1 micrometer respectively.

$12078 is the price of the printer. BCN3D Epsilon W50 SC can be bought from its manufacturer’s website. 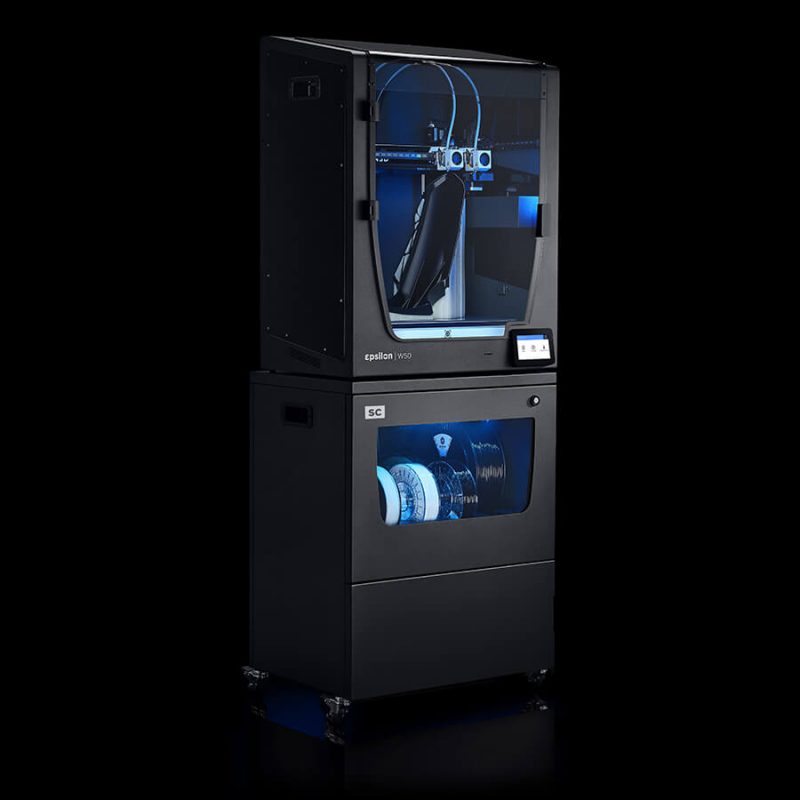 The printer’s design is an anomaly considering the design of other printers in the same price range.

BCN3D Epsilon W50 SC can be said to be divided into two parts i.e. the upper and the lower.

The touch screen interface is placed on the right bottom of the upper part of the printer.

And the lower part is divided into two more parts i.e., the upper and the lower.

Glass is the material with which the printer’s upper part is made up of. It also contributes to building more than half of the lower part. Glass enables viewers of the printer to get a glance inside the printer.

All the information regarding the printer can be found online. So, overall there is no hassle in setting up the printer.

There is a whole knowledge base that one can access to know about various parts of the printer.

As far as the assembly is concerned, the printer is as good as any other plug and play printer available in the market in the same price range.

The printing happens layer after layer, and the printing cost of this printer is generally lower than others based on SLA, SLS 3D printing technologies.

Apart from offering massive build volume, the printer steals the show when it comes to offering high-quality part and functional prototypes.

The printer is able to do so, because for various reasons, such as a humidity-controlled environment.

Keeping in mind the nature of filament spools i.e. to absorb moisture from the air, BCN3D has equipped this printer with a storage space that accounts for the print quality of parts and functional prototypes printed in it.

Because the printed bed of this printer can withstand 120 degrees Celsius of temperature, printing with various materials is made possible.

The fully enclosed chamber of this printer can withstand 60 degrees Celsius temperature.

Whereas there are also two filters ensuring that not only the parts stay out of danger posed by the industrial-grade 3D printing materials as well as the environment.

All of the above-mentioned reasons, make up for parts and functional prototypes that have a layer height range of 0.05 mm to 0.5 mm. 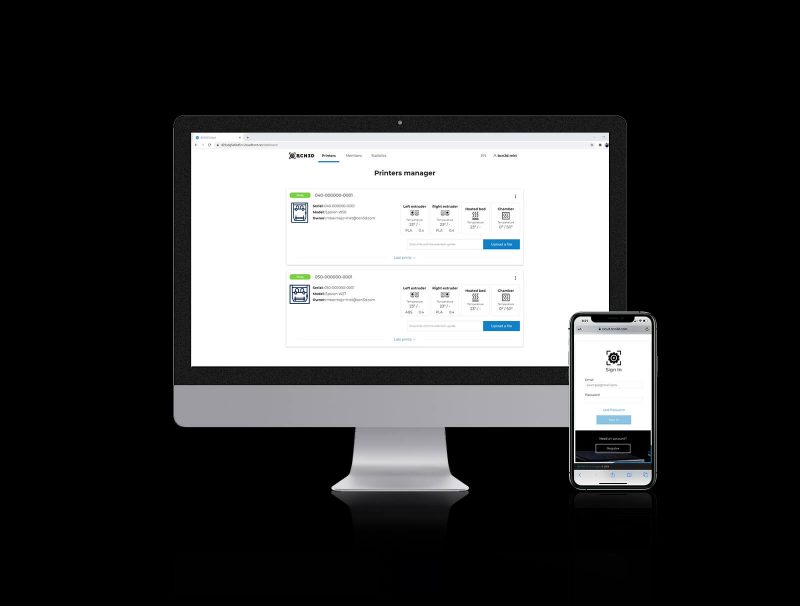 BCN3D Cura is the name of the software that BCN3D Epsilon W50 SC is compatible with.

It can be operated via devices working on Windows, Mac, as well as Linux operating systems.

The file extensions supported by this software are STL, 3MF, OBJ, and AMF.

Wireless connectivity is also offered with the printer via BCN3D Cloud and it supports Google Chrome, Mozilla Firefox, Microsoft Edge, Safari as well as Opera.

BCN3D has a Support tab on their website on accessing which, you can get information about any of their product or service offerings.

The company can also be reached out via phone, email, and skype.

There are some parameters that one must look at before buying a 3D printer, to compare this printer with others in the same price range. Such parameters are mentioned below in brief.

3D Printer User Expectations: Highend professionals as well as manufacturers that are willing to pay a price for obtaining high-quality parts and functional prototypes, would be satisfied working with the printer.

Overall BCN3D Epsilon W50 SC can be employed to make parts and functional prototypes that can be used in critical industries for applications that demand dimensional accuracies.

The printer does have some downside, by being expensive, and enclosed bodied printer, post-processing on which gets a bit difficult.

But, printing with five modes is too lucrative to be ditched for the above-mentioned difficulties.