Best filament? ASA vs ABS Filament Which Is Better

There are many factors on which the final 3D print quality of an object depends. To start with, we have the 3D design file and the layer height offered by your 3D printer. Followed by the filament used, we end up with the post-processing technique employed.

Among these major parameters, the one that’s the most primary is filament. But, when it comes to making a choice between which filament to choose over the other, how do you decide?

Frankly, there are many criteria that go into this decision-making. Among those criteria, the simplest one is comparison! And that’s exactly what we are going to do in this article.

Taking two of the most popular filaments ASA and ABS, we are going to point out to you various aspects of ASA vs ABS filament and help you decide which one is better for your application.

Before we get into the core comparison of ASA vs ABS filament, let’s look at some of their similarities.

The first and the obvious one is that, both of them are used for making parts and functional prototypes via FDM and SLA 3D printers.

Just as you can smooth objects created using ABS with acetone, so you can with parts made by ASA. ABS as well as ASA falls into that category of materials which becomes softer when heated and hard when cooled i.e. thermoplastics.

Both of these thermoplastics pose the same level of difficulties when 3D printed because they are heat sensitive. For some of the applications, you can interchangeably use ASA and ABS.

Having stated so, we have identified four different points of comparing ASA vs ABS filament that are: material properties, printer settings, application, and their pros and cons. So, let’s go through each one of those one after the other.

Here is a comprehensive comparison for ASA vs ABS in terms of various parameters. 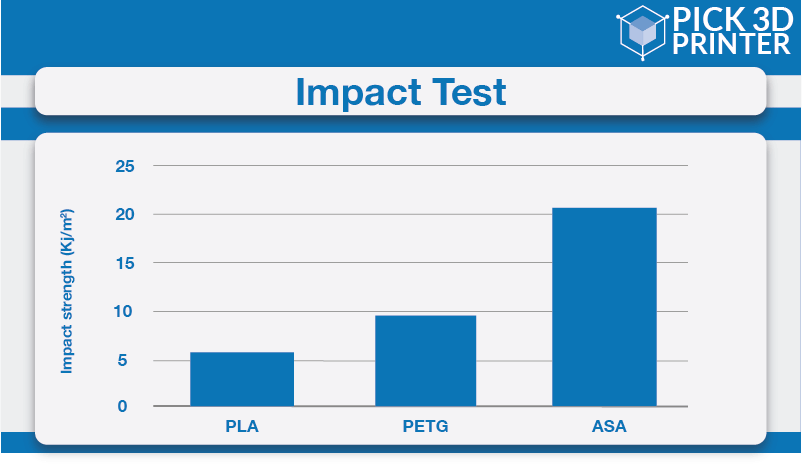 In terms of their first use, ABS precedes ASA. The former was created somewhere in the 1940s and was firstly endorsed as an option for Bakelite.

ABS took ten years of sustenance for becoming the most widely accepted plastics. ASA can be technically referred to as the more improved version of ABS.

The ultimate strength of ABS is 40 MPa, as opposed to ASA’s 55 MPa, which means that given an application wherein the stress in it is continuously rising, ABS will break before ASA.

In terms of stiffness, both the materials are ranked almost similarly. This implies that ASA can bend closely as ABS can. They do not have a significant difference in breaking when subjected to bending application.

The durability of ABS is twenty percent lower than that of ASA. Meaning that the former offers lesser heat, fatigue, water, UV, and chemical resistance than the latter.

When it comes to withstanding temperature and not deforming, ABS steals the show by 3 degrees Celsius compared to ASA.

Compared to ASA, ABS expands more when heated. The coefficient of thermal expansion of ABS is 90 compared to ASA’s 98.

ABS is originally made from monomers that are extracted from petroleum material. Some characteristics that make ABS material more suitable for application than styrene are its increased toughness.

It’s intriguing how ABS’s limitations led to the invention of rubber i.e. Butadiene – the third monomer in addition to acrylonitrile.

ASA strongly resists against ultraviolet rays. As mentioned above, ASA is an upgraded version of ABS. This quality makes it one of the most suitable materials for engineering and outdoor applications.

In terms of toughness and durability, ASA is much more capable than ABS. But it is still new in the market. So, you can say the current conditions for ASA are the same as they were for ABS during its initial years. 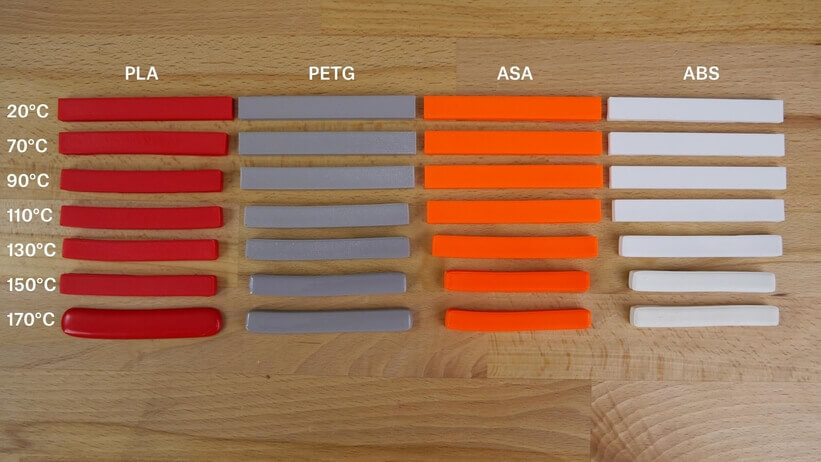 Perhaps if you own a 3D printer, this must the most interesting part for you. What should be the extruder temperature, which prints bed suits ASA the most, which one suits ABS the most?

What are the glues that are recommended with the material? And answers to many such questions are provided in this section.

Generally, after buying a 3D printer and starting to print, the first question you want to know an answer to is, whether ASA or ABS requires a heated bed or not?

So here’s an answer to the same. Both of these ASA, as well as ABS, require a heated bed while printing parts or functional prototypes. So, make sure you have one.

Rating them in terms of their printability, you can conclude that overall, ABS is a little more printable than ASA. In normal words, ASA is more tantrums-showing than ABS therefore you need to be more careful while printing it.

Finally coming to the part that you must have been waiting for. The extruder temperature range! For ABS you can manage anywhere from 220 degrees Celsius to 250 degrees Celsius.

After having gone through the extruder and print bed temperature ranges needed for this material, it’s time to state the print bed adhesives that these filaments are the most compatible with.

For ABS, you are recommended to use ABS slurry material with Kapton tape for excellent bed adhesion. Whereas for ASA, PEI with glue stick plays the part.

It is recommended to use an enclosed chamber 3D printer while printing parts and functional prototypes using ABS filament. ASA is fine with or without an enclosed 3D printer.

You know the material properties of these materials by now. We’ve even toured you through their printer settings, but here’s the most practical part.

On the basis of their application, you will be able to get the exact answer of which one of these filaments is more suitable for creating a specific part.

ABS has been experimented with, tested, and proven to be excellent when put into application in the automotive industry, production of parts for final use, prototyping as well as developing custom components in general.

ASA is more used for creating functional prototypes, instrumentation, production tools, parts that are intended for final use, and elements requiring resistance to external atmospheric conditions.

Experts advise using ABS where there is a requirement of high mechanical and thermal properties and weather conditions and resistance to the same does not play a huge part. ASA on the opposite is purposely endorsed for being able to resist the weather conditions.

Also, if you have a 3D printer with a built-in chamber, only then will you be able to print using ABS. Otherwise, you will have to go with ASA.

Overall, their thermal and mechanical properties do not have major differences so these minor changes in practicality should become major driving factors while choosing one over the other.

Models that are intended for further plastic forming and would not be subjected to any risk of breakage can be more easily made with ABS than with ASA.

Whereas ABS has already been used for making pipes, musical instruments, home appliances, keyboard caps, canoes, and even flat-screen TVs and computer monitors.

However, the point that the world is still getting used to ASA must be taken into consideration. The reason why you have fewer data about ASA than with ABS is also because the material is less experimented with than its opponent.

ASA is more resistant to UV rays because it does not typically turn yellow as ABS does.

What’s The Difference Between ASA vs ABS in Terms of Their Pros And Cons?

Reading this section would give you the exact exposure to these materials’ exact strengths and weaknesses. It would also convey to you the points to take care of while 3D printing objects using them.

So, you can already take the needed precautions while printing with these materials.

If there is one most significant, but in some ways silly limitation of ABS, it’s the toxic fume that the material produces while melting.

You would need a proper ventilation space while 3D printing ABS on a larger scale otherwise you may be subjecting yourself to some seriously dangerous conditions.

But here’s the paradox: on giving more ventilation to ABS, it would not print the same as it does without it! Now you realize how hard it is to print with ABS?

ASA too releases some very toxic fumes, but it can be exposed to the environment. And that is where the limitation does not actually remain a major limitation, it’s manageable.

Printing objects with ASA filaments require you to buy a 3D printer, the extruder and heated bed of which, can resist a higher temperature.

And this is where you will end up spending more in creating parts or functional prototypes using this filament as opposed to ABS filament.

And also, to mention, more temperature generation would mean, more cooling and hence increase the overall energy consumption which in turn will lead to more printing cost per part.

ABS filament does have some issues related to adhesion. It does not stick as well as ASA does. And this is because the material inherently is prone to shrinkage.

Due to this, you need stronger glues such as Kapton Tape as opposed to normal glues which easily work, in the case of ASA.

In terms of warping, ASA and ABS are both equally prone. Although some sites claim ABS is more prone to warping than ASA. Overall, the reviews are just about the same.

In fact, warping is a phenomenon that generally occurs due to uneven cooling. And as you know by now, ABS prefers enclosed chambers and ASA prefers the other way.

So, arguable more ASA parts and functional prototypes are made in an open environment which naturally has even cooled.

This could be a reason why people find more warping issues while printing with ABS. But that’s manageable and for the same reason, negligible.

After having gone through the comparison of ASA vs ABS filament in terms of material properties, printer settings, and applications and their pros and cons, we’d also like to give you some exposure to the prices at which they are sold in the market.

Although there are different brands of filaments that offer these materials at different prices, the prices can be ranged out.

Having stated so, you might get a brand that offers a dollar or two cheaper, also a dollar two more than the highest price mentioned above, but that’s the tolerance you’ve got to keep.

And this might even be because of the reason that ASA is still new and less experimented with, compared to ABS.

And as time goes, who knows, in terms of price comparison ASA vs ABS filament would be equivalent or even cheaper. After all, it all depends on the demand-supply situation of the market, yeah?