HP is a name that is not new for anyone who hears it. Starting in a garage as an electronic test and measuring equipment manufacturers, HP has grown like a tree from a single root into many branches of green leaves.

In this article, we are going to talk about HP’s products in the field of manufacturing 3D printers. And about each of the HP 3D printer price.

For people who do not know about HP’s venture into the field of 3D printer manufacturing, it must be surprising to hear about the transition and expansion of this “electrical equipment” manufacturing company devising 3D printers.

The company started walking along the road of additive manufacturing long ago but produced its first checkpoint in the year 2016.

This checkpoint was new even for the companies which started before HP. It is what is currently known today as HP’s trademark 3D printing technology.

What is Multi Jet Fusion? 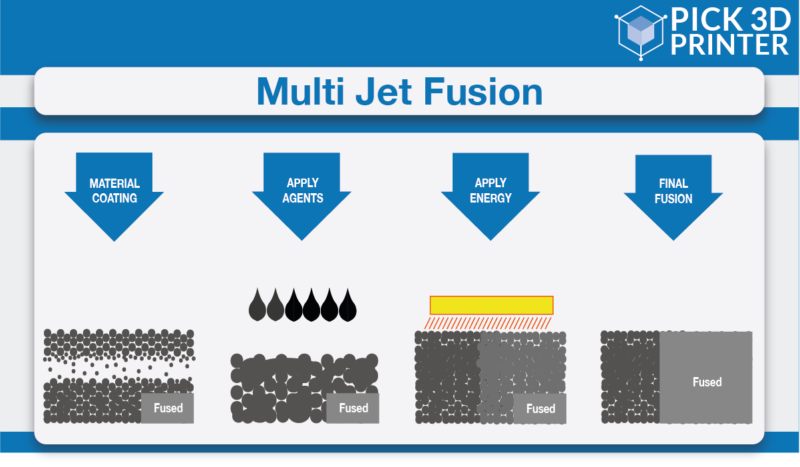 Technically this technique is known as a mixture of two older existing powder bed fusion technologies: SLS and Binder Jetting.

As mentioned above, this technology, based on powder bed fusion, starts working by laying a bed of powdered material that you have chosen to 3D print parts and functional prototypes.

Let’s understand a little bit about the two technologies of which Multi Jet Fusion is said to be a mixture. 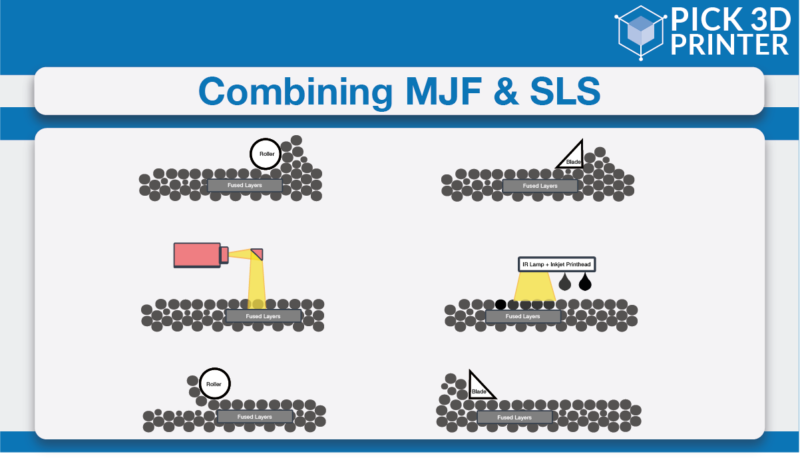 The benefit of HP in the field of 3D printer manufacturing is its lessons from 2D printing.

3D printing technology has 2D printing as its base ideas, and since HP has done it for years and extensively unlike many other companies, it knows the best of heavy-duty 2D printing.

Then the technique diverges in the way it fuses the powdered material into a part or functional prototype.

In printers based on Multi Jet Fusion technology, each fraction of part or functional prototype is created in a specific manner.

Using this technology parts and functional prototypes are printed in an HP 3D printer. To date HP has three 3D printers to its name:

HP 3D printer price for all three of these printers is different from each other in the terms of their features and service offering.

We’ll now look at each of these printers one by one, giving you a brief idea about each one of them.

While the other two on the list are known for short runs and short production, the Jet Fusion 5200 Series is HP’s offering to the world of long runs and longer production needing manufacturers.

The hardware of this 3D printer system comes with a number of significant improvements and upgrades that enable the user to take advantages like higher productivity, accuracy as well as consistency in the quality of each part or functional prototype that is manufactured.

Insights that led to the improvement of features in this 3D printing system were a gift to the company by its previous Multi Jet Fusion technology users. Three main categories include:

Notable Features of this printer

The single-pass configuration is noted to be the most notable feature of the Jet Fusion 5200 Series.

This new system effectively is able to travel in the center of the operation from two-pass mode to a single pass mode.

An even more powerful lamp and a higher degree of productivity compared to HP’s previously employed MJF systems fuels this process for all its users and creating opportunities for working with materials that achieve glass transition temperature at a greater number than others.

The thermal imaging system of this printer is developed with more sophistication and five times the resolution of the Jet Fusion 4200.

Jet Fusion 5200 Series features a low-cost cooling unit that sits on top of the build unit and is hot even after the completion of the printing process.

The liberation of the build unit for the next job is completed when the “still-hot parts” are automatically transferred into the cooling boxes.

The 5210 and 5210 Pro are of more economic value than Jet Fusion 5200 because they are more conducive for industrial applications and they enable manufacturers to see the status of their machine even from a distance.

You need to Get a Quote from the company to know the exact price of any of these 3D printers. However, estimations of the price of Jet Fusion 5200 Series is around $ 250,000.

Able to produce parts and functional prototypes of medium-range, the Jet Fusion 4200 is considered ideal for industrial prototyping and final part production for manufacturers who do not wish to spend as much as the HP 3D printer price 5200.

The printer allows you to choose between print modes that are tuned for mechanical, or functional, or aesthetic properties, printer accuracy, and speed.

When the printer reaches your place, you can plug and play it directly, it needs no further assembling or installation.

Notable Features of the printer

Calibration which is one of the most important things to achieve before starting any 3D print is an area where more experienced hands are needed.

By providing an auto-calibration feature in the printer, HP has thinned out the line between experienced hands and first-timers.

The nozzle to print bed height will be automatically leveled depending on the part or functional prototype that you are 3D printing.

A highly effective and functioning control screen that not only lets one monitor but also operate various parts of the printer, makes it easier for people to manufacture parts and functional prototypes with lesser human intervention.

Ensuring the temperature needed to melt the powder, a closed chamber is designed by the manufacturers of this printer that lets users print parts and functional prototypes with uniformity.

And once the parts or functional prototypes are prepared, they can be cooled instantly using the processing station of this printer.

This 3D printer has featured many lists of best 3D printers that one should buy for this year. Jet Fusion 3D 4210 such an option that users can ...
Add to wishlistAdded to wishlistRemoved from wishlist 0
Add to compare
Check Price
HP

Being the most compact 3D printer in its offering, HP Jet Fusion 500/300 series printers are designed by cost-effective small to medium-sized product development teams.

Primarily designed for design firms that need professional 3D printing, as well as universities that want to teach their students with this amazing new manufacturing technology, HP Jet Fusion 500/300 series can increase your productivity by producing multiple design iterations at the same time, it takes for printing a single print.

Like the previous 3D printer series on the list, this one too manages to offer a layer thickness of 80.

The speed of the 3D printing part and functional prototype offered by printers in this range is 2340 cubic centimeters per hour and the precision along the XY axis is 1200 dpi.

Notable Features of the printer

Engineers would love to tweak and tinker with this printer because it has the ability to produce accurate functional parts that require intricate detailing.

Also as a user, it is fun to operate on this printer which promises to produce engineering-grade thermoplastics with optimal mechanical properties.

Whether your part is to be manufactured in black, white, or fully colored, you would always be able to stay ahead of the competition because of a technology that is completely ready and supportive.

As mentioned in the above section of this article, using 3D printers in this series you would be able to increase your productivity.

You can buy the 3D printer from a reseller near you or from any website that functions as e-commerce for 3D printers.

All the series of HP 3D printers use HP Smarstream 3D Build Manager, HP Smarstream 3D Command Center as software to build a 3D design file of the part or functional prototype you wish to 3D print with.

Users of these printing systems recommend adjusting a little with the cost of getting a higher quality of products.

HP 3D printer price may seem on a higher-end, but they are only because of their proprietary 3D printing technology.

One should always remember before buying a product of HP, the immense amount of experience it possesses in the making of 2D printers. Also, to remember is that HP also acts as a 3D printing service provider.

So, if you wish to get parts straightway from the company, without purchasing its printers, it is possible.

You can check out the website of the company for more information regarding the HP 3D printer price, as well as HP 3D printing services.

Hope this article serves you the aim with which it started and provided you insights that were new and curiosity-raising.

How Much Does 3D Printing Cost Per Hour - Expert Guide