Sigma R19 is an extension for BCN3D in the field of manufacturing 3D printers. Its improved usability comes in various aspects of the 3D printer such as new printing modes and user interface enhancements which make the printer very advanced than its predecessors.

With a semi-closed welded aluminum frame, Sigma R19 is an evolved and improved version of its previous model. The printer consists of a novel system ...
Add to wishlistAdded to wishlistRemoved from wishlist 0
Add to compare
Check Price
BCN3D

The latest version of the Sigma, the R19 is made in Barcelona by BCN3D and is a part of the University Polytechnic of Catalonia. 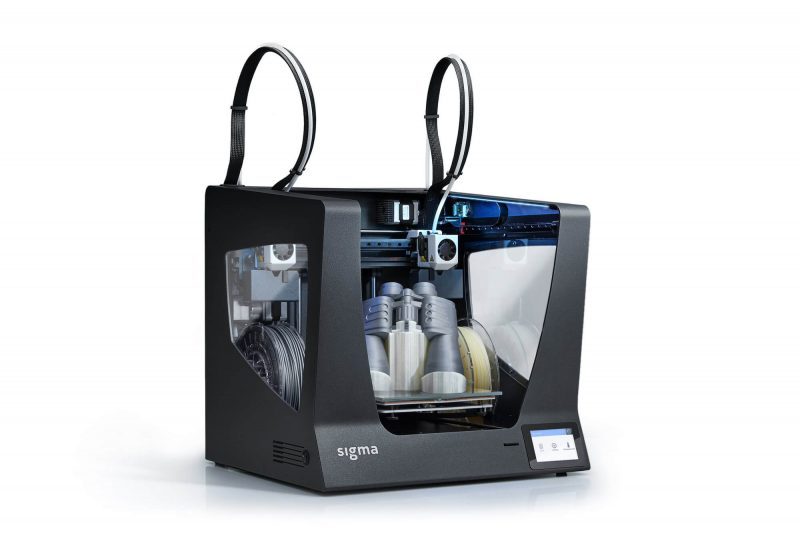 This printer was released back in 2018 and is known in the market for having more than one extruder, just like many other dual extruder 3D printers that have come onto the market in recent years.

In this article we are going to look at this printer in-depth, starting with features.

It’s not that the Sigma R19 has only the below-mentioned features.

There are more, but we have tried to mention those ones that you will rarely find in others and if you will, they would not be functional in the same way as they would be in this printer.

The printer’s two IDEX printheads set the Sigma R19 apart from many other 3D printers.

This is good than having just one printhead, that et you print off two models at one time.

Obviously, this divides the print area, so you would no longer be able to make parts and functional prototypes of the same build area as mentioned on the website, but it does make the printing faster.

The Sigma R19 offers two unique printing models – mirror and dual, in the duplication mode this 3D printer can print two identical models at the same time. It basically splits the printing volume in half.

So, say you would be able to print half the size of build volume that you can print on this printer.

The Mirror mode of the printer allows you to print two mirror designs symmetrically, although there is one slight drawback with this one and that is: it splits the print bed 60/40 between the two extruders.

Meaning that it doesn’t divide it up equally giving you one larger print bed for one extruder to work with and a slightly smaller one for the other, which gets problematic when you wish to manufacture a part or functional prototype with the same build volume.

The latest Sigma R19 from BCN3D has a build size of 210mm x 297mm x 210mm which does not make the printer’s biggest 3D printer out there but it is still a fairly big size for printing 3D models.

The manufacturer hasn’t strayed very far from previous models in the design criteria which isn’t a bad thing as the Sigma looks great and will fit in well in a modern environment.

You get various accessories with the Sigma R19 as well including lubricants, cleaning solvents as well as metal shims.

After having seen the specific features and their explanation, let’s read about the specifications of the BCN3D Sigma R 19 3D printer to know more about the printer.

The printer is based on FFF 3D printing technology and offers a build volume of 210 mm * 297 mm * 210 mm for manufacturing parts as well as a functional prototype on its print bed.

The heated bed of this printer is made of PCB and the printer’s body features a full-color capacitive touch screen.

The printer is known to operate making 50 decibels sound when 3D printing.

You can connect with the printer using the SD card as well as USB. The layer height visible on the parts or functional prototypes printed using the printer ranges from 0.05 mm to 0.5mm.

The positioning resolution on the X, Y, and Z-axis of this printer is 12.5, 12.5, and 1 micrometer respectively.

The operating temperature of this printer as per recommendation from the manufacturer ranges from 15 to 35 degrees Celsius.

The maximum extruder temperature that this printer can withstand is 290 degrees Celsius.

Whereas the maximum printing temperature recommended by the company to print on the printer’s print chamber is 280 degrees Celsius.

The temperature that the printer’s hotbed can withstand is 100 degrees Celsius. The support material that you can use to print with the printer is PVA and HIPS.

The filament diameter that is offered by the printer is 2.85 mm with a tolerance of 0.05 mm.

The price of the printer as mentioned on the website Aniwaa is $2995.

Those who have experience of working with the printers of this company will find them in a familiar zone while working with Sigma R19.

Starting with the frame, the manufacturer has maintained its reputation of using a welded aluminum frame used in previous Sigma 3D printers.

Although the frame is similar there are various aspects of the printer where it has evolved itself, taking into consideration the limitations of previous 3D printers by the manufacturer.

The most prominent feature that stands out from the previous versions and this one is the dual extrusion system which is capable of working independently.

Here is a completely novel system that keeps two separate print heads functional and mounted on to the same X-axis gantry.

Apart from keeping the print head functional, the complete setup of this system gives the printer the print speed and accuracy it needs for producing high-quality parts and functional prototypes speedier.

This independent extruder system is fed by two Bowden extruders arrangement wherein the motors are mounted to the frame of the printer, and the push filament which is remote through the PTFE tube connects the printer. 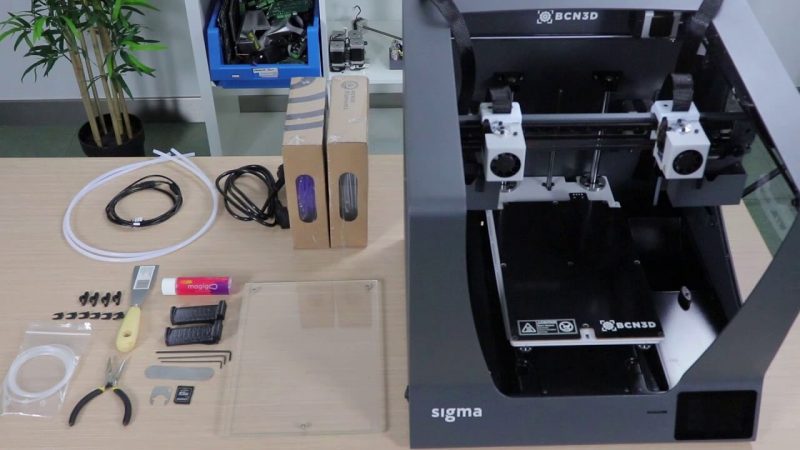 You would be greeted with a lot of foam when the printer is shipped to your place. This foam is responsible for securely delivering all parts of the printer to your home.

Taking the printer out of the box will take some time. Because everything is coated in a fine dusting of black foam from the cutouts.

The foam will also find its way into the PTFE Bowden tubes that come along with the printer. So, you will need a little bit of compressed air to clear them out.

All this will take some time, and then you need to read the instruction manual, check the bed leveling after which you may start printing your first part of a functional prototype.

As mentioned above, the printer prints using FFF 3D printing technology which means that it uses a filament to manufacture parts and functional prototypes used in various industries.

The cost of printing a part using this technology is generally lower when compared to other technologies that make use of laser for curing parts or functional prototypes. 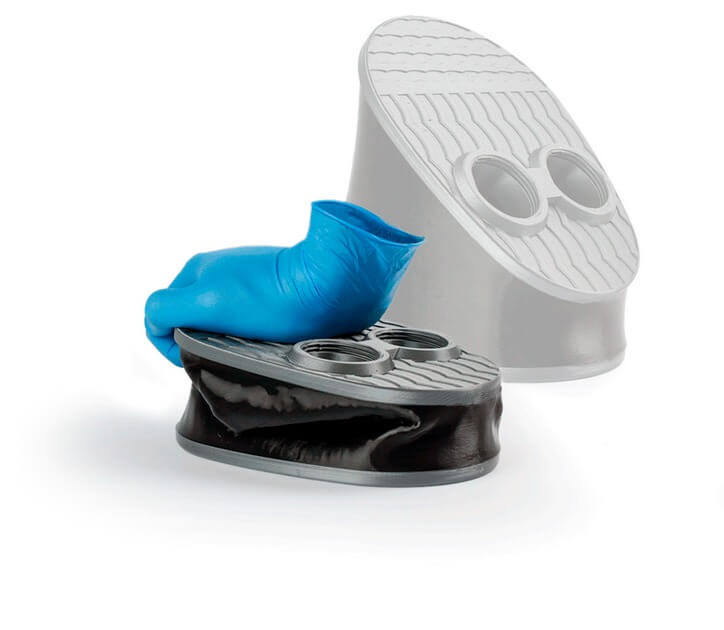 As reported on various websites, the baseline quality of the prints from the Sigma R 19 is exceptional.

They make a clear delineation between colors in two-tone prints of the same material. The motion system and extrusion system work well together.

Despite the minor quibbles that come up in print jobs involving many retractions in quick succession, making it not uncommon to pluck slightly hairy looking prints off the bed when printing using PVA support material.

And this is not something that a small session of post-processing wouldn’t fix, you will have to keep an X-Acto knife handy or a blow torch handy.

There are also small issues reported with larger prints having trouble sticking to the bed.

The Sigma R19 ships with a bottle of Dimafix print adhesive, which works well when slathered onto the glass bed.

However, it is not hard to deduce the fact that Sigma’s PCB heating element has trouble keeping an even spread of heat; by touch alone, at high temperatures, we can feel that the perimeter of the bed is cooler than the center. 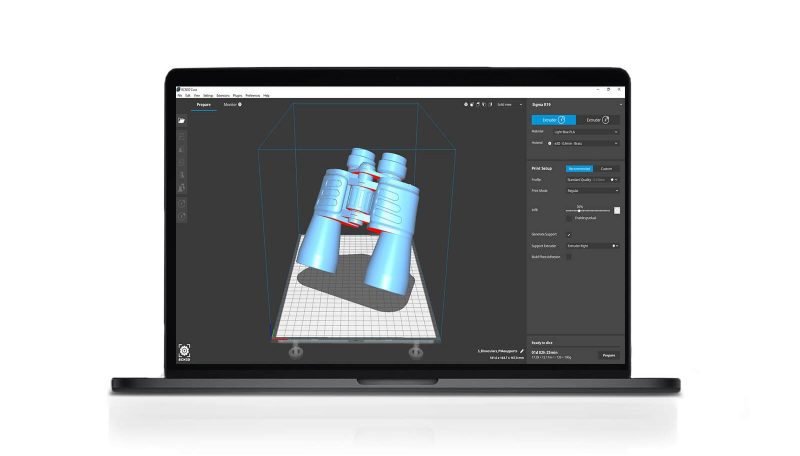 Those who know are familiar with the 3D printing field, in general, would know the name Cura which is a familiar software made by Ultimaker. It is open-sourced software.

BCN3D modifies this software making it more familiar with its printers.

A Support tab on the company’s website awaits you to click on it if you have any queries regarding the printer or its maintenance.

If the part of the printer is not working as mentioned on the website, you can scratch the head of the customer service agent of the printer’s manufacturer using the online option, email, or contact number.

Apart from this, if you choose to click on the Support tab, you would be able to explore the knowledge base of the printer very easily, which will solve most of your doubts.

Those points which we want you to remember especially while buying and comparing this printer with others are mentioned below in brief.

3D Printer cost: Three thousand dollars is a price that we assume beginners in this field would not be willing to pay seeing that printers are also available, based on the same technology for less than a thousand dollars. So, it is necessary for you to understand the features and what you require the printer exactly to buy it.

3D Printer capability: You can print with almost all the printing materials that are popular in the same printing technology.

3D Printer Practicality: The different modes of the printer is what makes it more practical to use. Mirror mode lets you make two different parts of a similar type in lesser time. The duplicate mode is also equally useful.

3D Printer User expectations: Expectations of professional designers would be fulfilled by this printer. Also, small business owners who were tired of working with a single extruder and just one more. Thanks to the printer’s independent extruder system.

Sigma R19 is an extension for BCN3D in the field of manufacturing 3D printers.

Its improved usability comes in various aspects of the 3D printer such as new printing modes and user interface enhancements which make the printer very advanced than its predecessors.

The modern advancements when combined with core components of the manufacture make the printer worth purchasing from the OEM.