2022 A Complete Guide to The Best 3D Printer Firmware

The word ‘Firmware’ is not to be afraid of. It is a simple program, like Firefox and Chrome that links software with the hardware. It translates input from the software into an output that the hardware can understand.

For example, the USB controller has firmware that allows the chip to receive information from the USB drive and convert it into a container that can be easily understood by the window explorer.

In 3D printers, firmware understands the ‘G-code’ sent to the slicer software by the user and translates it to the stepper drivers that control the motor, heater, flow, speed, and display, etc.

For example, the given G command  ‘G1 X 20 Y 10’  to the software is translated into a set of instructions understood by the stepper. Thus, the extruder reaches X=20 and Y=10.

In this article, we will list down the top 3D printer firmware in detail to make it convenient for you to choose one from different options available in the market. 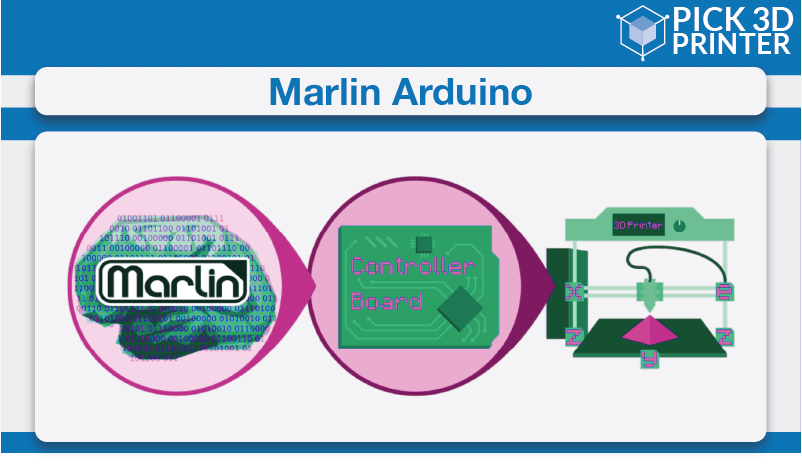 Marlin is one of the most widely used firmware. It was created in 2011 by Erik van der Zalm for RapRep and Ultimaker 3D printers.

Being reliable and precise, it now manages most of the 3D printers. It was derived from the previous codes of Sprinter and GRBL. It has tons of features that are useful for 3D printing.

Marlin offers a comprehensive G-code with 150 commands. It supports five multiple extruders. It is licensed under GPLv3 and is free for all applications.

It is available in two different versions, one for 8 bits microcontroller and the other for 32 bits board. The 32 bits version offers more advanced and better features. It enables you to customize almost everything. 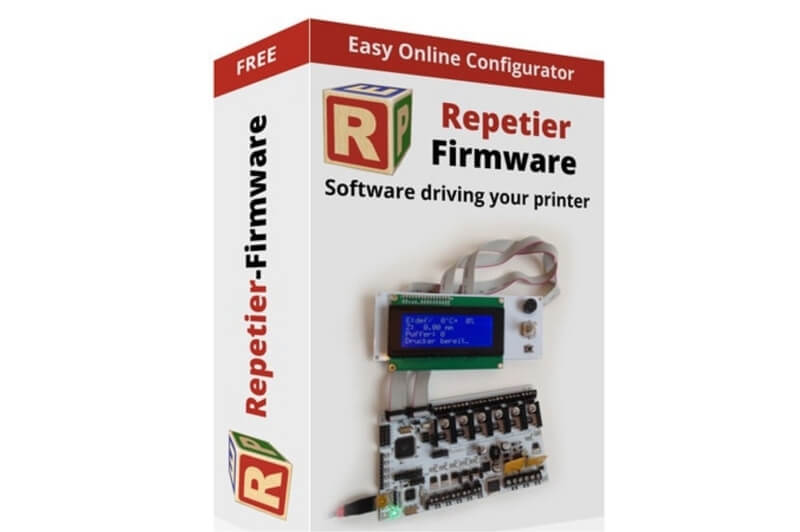 Repetier firmware is the firmware that is designed to work with all Arduino-powered circuit boards and a range of 8 bits boards.

It is known for its reliability and has remained dominant in the 3D printing market for many years. It works well with Repetier Host software and complements its features. It operates great on both Delta and Cartesian 3D printers.

The firmware is highly customizable. You can control many parameters and put in your requirements by using the Repetier firmware configuration tool. As its open-source, you can easily update and maintain it by freely downloading its advanced version.

The skilled engineers and developers of Prusa Research developed Prusa firmware for their 3D printers. It is the modified version of Marlin firmware and offers features that are not available with other 3D printers.

It is designed to work well with all Einsy Rambo boards that come in Prusa 3D printers. It is free and open-source.

The firmware is regularly updated based on the users’ feedback. You can check Prusa’s GitHub repository for beta or pre-release candidate versions and a full log for each version.

These versions are for advanced professional users to try and provide feedback for future improvements. However, you should always take care when upgrading to a newer version as they are not fully tested and may be unstable.

Prusa 3D printers are one of the best printers that offer advanced features that include multi-material 3D printing, TMC 2130 driver and auto bed leveling, etc. These features are greatly supported by Prusa firmware.

RepRap Firmware is an object-oriented highly modular control program that is designed to work on a duet controller board. It is one of the earliest options that support 32 bits board.

It can be easily updated by making a few changes in the configuration file through an SD card. Online configuration tool also enables you to define or upgrade your firmware.

The RepRap firmware not only supports 3D printers but also CNC machines, laser engravers, and cutters. It supports many G codes that are not supported by other firmware for configuration.

Setting up RepRap firmware can be tricky for someone who is not experienced and unfamiliar with the general steps. However, if you patiently read through the document and follow the process accordingly then the features that it offers are worth your hardship and patience.

A multipurpose firmware, Smoothieware was designed for Smoothieboard controllers. It works well on 32 bits boards.

It is rich in features and was developed with best-in-class performance in mind. It allows huge customized configuration including extra stepper motors and configures the board for CNC milling and laser cutting.

Smoothieware is limited to Azteeg X5 mini and Smoothieboard only. Its development and user community are relatively small and new. It is easy to use due to detailed documentation.

The firmware is free and small. It receives G code generated by the slicer software and then executes them for example auto-calibration.

Klipper is relatively new firmware with lots of great features. It was developed by GitHub. It uses a different approach for G code processing. Instead of the microcontroller performing the algorithms, all calculations are done by the host like Raspberry Pi and have the MCU execute steps at a particular time.

It makes use of an additional microcontroller. It is able to do calculations faster that enable quick 3D printing for example your 8 bits 3D printer can run at a speed of 80 to 100 mm/s.

Klipper features offer a great 3D printing quality experience and reliability. It can run on all types of 3D printers with little extra hardware. These include Delta, Core, and Cartesian. It is written in Python with simple coding and supports OctoPrint.

Kliment and Caru are the leading developers of the Sprinter firmware. However, many others also contributed with their patches. It is designed for RAMPS and other RepRap single controller board machines. It is licensed under GNU GPL v3 and is based on Tonokip’s firmware.

You can easily make adjustments to the calibration in the firmware. You need to know how to compile and upload it to get your hands on its useful features.

Sailfish is the next-generation firmware designed for Makerbot 3D printers. It targets advanced professional users by offering features that are incredible.

It is fast and offers better quality 3D printing. It receives printing instructions from MakerWare software, SD card files, ReplicatorG, and other desktop programs and then executes those commands.

Sailfish has been around since 2011 and is based on various RepRap and MBI Gen 4 firmware. It was initially known as the Jetty firmware.

If you are looking for portable firmware then APrinter is a great option to be considered. It was developed by Ambroz Bizjak for RepRap and other CNC 3D printing.

It was written in C++11with some features of G++. It offers a heavy metaprogramming template and a web-based configuration. It is used to do both high and low-level configurations for supporting different components of various 3D printers.

The developers have paid special attention to coding and avoided hard coding. It works well on Duet, Ramp, 4pi, Melzi, and Radd controller boards. It doesn’t rely on inefficient libraries such as Arduino. The configuration parameters are either stored in an SD card or EEPROM.

Redeem firmware is the default firmware for Replicape. It was developed by Elias Bakken and is mostly written in Python.

Since version 0.14, it is based on Repetier code. It uses two heavy Programmable Realtime Units (PRU) on BeagleBone Black. One is for stepper timing and operation and the other is used to monitor end stops.

The firmware is similar to software like Marlin and Teacup etc. It allows you to monitor and restart some important processes including basic configuration editing through a web interface. It supports Octoprint and enables communication with Ethernet, USB, and virtual TTY pipes.

For those who are looking for better 3D printing quality and have already messed up with 1000 configuration files and such stuff, Teacup is their go-to option.

It is easy to use and offers high performance and simple coding. It is the first RepRap firmware that offered acceleration. It is designed for many ATMega and Arm-based controllers.

Teacup runs smoothly and fast. Instead of C++, it uses 100% integer math and avoids long math operations. It offers optimum precision over a wide range of controllers. These include 8, 32, and 64 bits controllers. It can be easily tailored to run on small controllers like ATmega168.

MK4duo is firmware designed for Arduino compatible setups by MagoKimbra since 2013.  It is based on Sprinter, Marlin, and Grbl firmware and is licensed under GNU GPL v3.

Its lead developers are Caru and Kliment. It works well on Rumba, RAMPS, Alligator, Generation 6 Electronics, and many other controllers based on 8 or 32-bit microcontrollers.

Grbl is a high-performance and low-cost firmware with no compromise. It is a substitute for parallel port-based movement control for CNC milling.

It operates on a vanilla Arduino (Duemillanove/Uno) till it runs on Atmega 328. It is written in modular C and uses all great features of the AVR chips for simultaneous operation and precise timing.

The firmware accepts standard g-code and has undergone several tests with several CAM tool’ outputs without any problem. It was licensed under the GPLv3.

Looking for advanced firmware for modern 3D printers, SJFW serves the best. It was authorized by ScribbleJ and has been active since January 2012. It is for Atmega644p and greater processors. It is rich in features.

Impro 3D was authorized by MaxPro3D and was active since February 2014. It is based on Sprinter firmware and was designed for a specific electronic, an Arduino MEGA 2560 with a specific shield.

There are numerous factors one should consider when buying a 3D printer with the best firmware. These include:

You should know the firmware of the 3D printer you are going to purchase as it will tell you the features that you can access. You might need to get firmware for your 3D printer to have a hand on certain specific advanced features.

If you want to run a specific firmware, you need to check whether the specifications of the controller board of your 3D printer are compatible with your chosen firmware or not.

It depends on the 3D printing technology you are going to purchase. For example, the delta 3D printers require complex instructions for precise movement control. If the firmware cannot process these instructions quickly, the printer might collapse at high speed.

How do I find out the firmware of my 3D printer?

If there is any menu option available named ‘About’ or ‘Version’, then you could know the firmware from there. Alternatively, you could simply visit the manufacturer’s website and search for your printer information by model or serial number.

When should I update the firmware?

If your 3D printer is freezing when trying to operate it quickly, you need an upgrade of the firmware. This will allow you to also access advanced features that your current firmware might not support.

How do I update firmware on my 3D printer?

Choosing the best firmware for your 3D printer might be challenging. By reading this guide, we hope you were able to choose one that best fits your 3D printing goals.