It’s been over 30 years that we invented 3D printing. Now it’s time to move forward, one step ahead. With the same intention, researchers and scientists have been working to develop 4D printing.

While it is still spurring and we need to wait a little longer to explore what the technology would entail, there have been a lot of talks about the same.

People are wondering what this means. Hence, it is important to find out all the information that we currently have about 4D printing.

Experimentation by MIT Self Assembly project tries to prove that there exists a little more advanced step after 3D printing and that can come into practice within a few years from now.

If additive manufacturing shook the world by its concept of adding one material with others to form a whole new material, 4D printing would be even bigger.

What is MIT’s Self Assembly project? What suggestions does it give about 4D printing? What are the estimations about the time when this technology will hit the market? And what hurdles does it need to overcome? Are some of the basic questions that we would try to answer in this article by trying to focus more on 4D printing technology.

WHat is 4D Printing?

How many of you have seen the movie named Transformers? I am assuming, almost everyone. The concept behind that movie was, can there be a technology through which objects are manufactured in such a way that they can transform themselves to some other shape whenever required?

Try to recall from that movie, the Cybertrons. How did they transform themselves from an Autobot to a car, to a truck, whenever needed?

This concept is thought about and then tried to put into action. Now that we have achieved a considerable amount of success with 3D printing, can we transform a 3D printed object into some other structure?

Is the question that seekers of 4D printing technology asked themselves. This is something that cannot be done without the help of external influencing factors.

So, temperature, light, or other environmental stimuli must be used to change the characteristics of the 3D printed part.

This concept was researched over at MIT Self-assembly Lab. The purpose over there was to combine technology and design for inventing self-assembly and programmable material technologies.

The main aim of building this technology was to benefits sectors of construction, manufacturing, product assembly, and performance. However, credits of the invention of this technology are also given to Stratasys and Autodesk.

Although the name of Australian and Singaporean researchers are at peaks while talking about 4D printing, no one has achieved significant results with this technology yet.

There are talks about scientists all over the world are getting more and more hands-on this technology to ensure they are the first ones to make a breakthrough. But to date anything the only talks are that we are getting closer and closer to this technology.

Let’s, now strike a perfect chord to see the exact difference between 4D and 3D printing.

What is the Difference Between 3D Printing and 4D Printing? 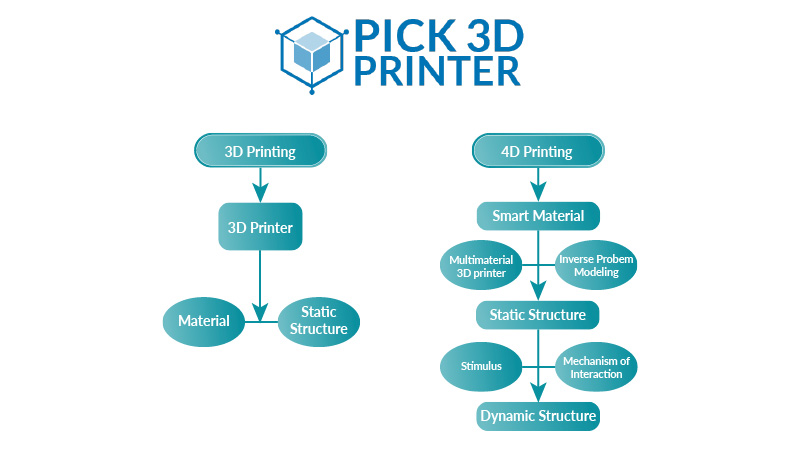 With 3D printing, you can print objects from scratch. You have the raw materials, like metal powders or photopolymers or plastic filaments or resins as in various technologies of 3D printing.

You heat them, solidify them layer by layer and then do the post-processing for achieving a good surface finish. But imagine that material, which you have made out of 3D printing is able to act stronger than its abilities if given some temperature or light support…

While 4D printing is about transforming the already created 3D printed object over a passage of time. The fourth dimension that we utilize here is time. And we utilize this dimension to change the shape of the already existing object.

This change can be brought in an object by using programmable and advanced materials that perform differently when exposed to a higher temperature, light, or water.

As cool as it looks on imagination, so difficult it is in its implementations. So, now let’s look at the hard part of it. Why it is difficult to implement this?

Which companies are working on it? And what to expect out of this technology? But before that a brief about how does 4D printing work?

What is the Working Principle of 4D Printing? 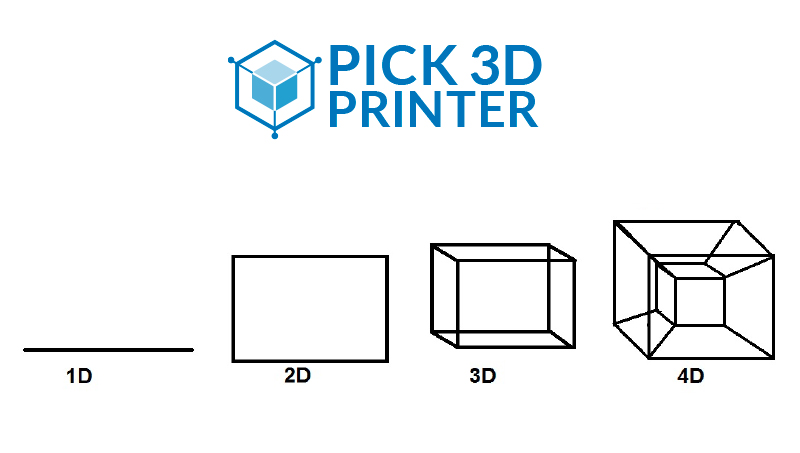 In a way, it’s silly because you might think that the object is going back to 2D from 3D. But this is the magic of 4D printing technology.

To prove that this technology is not just silly and can have massive impacts, let’s imagine the bulk of such boxes. They are supposed to be transported from one place to another.

Now if we have this technology in place, we pack more boxes than what we can if we do not have the technology (just like current situation).

And while unboxing we can have other environmental stimuli to change the boxes into 3D again. This is like changing the shape and structure of the 3D printed part whenever need, according to its application.

4D printing technology uses commercial 3D printers, for example, a Polyjet printer. The input for these printers is nor ordinary, but “smart” materials.

Just like hydrogel or a shape memory polymer. These smart materials have thermomechanical properties by which they can change their shape. And this is what differentiates them from the ordinary 3D materials that are used for 3D printing.

The advantage of using smart materials over 3D materials is that they do not have rigidity as one of their characteristics.

Want to read some more advantages of 4D printing? Come on!

What are the Advantages Of 4D Printing?

Let’s take a look at how companies are experimenting with this idea.

Attempts Of Companies To Experiment With This Idea

In his Ted Talks, MIT’s assistant professor Skylar Tibbits states that he is fascinated with the capabilities of 3D printing. He further adds how he wants to take 4D printing to another level.

Tibbits lay focus on the area of manufacturing a 4D object that can change shape with accuracy and precision, whenever required.

Since 2014, Tibbits is working with Autodesk to create a computer system that allows users to make geometry inputs for measuring 3D printed objects that will be converted in 4D after some processes.

Tibbits currently works at the Self-Assembly lab opened at MIT. He is an editor of 3D printing and Additive Manufacturing Journal that offers great insights to 3D printing objects and designs. He is very positive about seeing 4D printing in the near future.

Particularly laying focus on our daily lives Tibbit says how 4D printing can be applied to changing the size of sneakers to fit the foot. And also to change the clothes according to the weather.

There are also other technologies that are researched simultaneously with 4D printing. An example of one such technology is the molecular structure. This technology organizes them into complex structures when they are agitated.

Apart from Tibbits, Australian Professor Marc has created the first 4D printed water valve with the help of his team of researchers.

This valve shuts when exposed to hot water and re-opens when hot temperatures are cooled. This is created by using hydrogel ink’s property to respond rapidly to heat.

In Singapore University of Technology and Design, Zhen Ding and his team have developed a new process that integrates five major steps of 4D printing into one.

He demonstrates how a flat star curves into the shape of a dome or flower whose petals close and open with touching of warm water.

As we were discussing experiments of various professors on 4D printing, you might want to look at other applications of 4D printing before concluding the article.

There are even more examples that you can go through which proves that something is coming along the lines of this concept.

3D printing has already proven that it has applications in every field, so, 4D printing, it’s going to affect our ways of thinking too. We would think of using the exactly same amount of things/machines/parts, which are necessary.

In fact, if you’d elaborate a little more on 4D printing, and look for the solution it is capable of providing, you may find it even way advanced better than any other technologies in existence. So, wait for the future that stays ahead of us.