A constantly observed trend is The newer the technology and its innovation, the higher price you need to pay for it.

Currently, it’s still at the nascent stage, hence a 3D printed house cost is on the higher end. But another much-spotted trend is: As the technology and its innovation grow older, they become affordable.

With more and more companies immersing in making 3D printed houses, its prices are dropping. However, it’s practically impractical to give exact standard pricing that will give you an answer to the question, “how much does a 3D printed house cost?”

So, we have planned to take you through the leading companies involved in making 3D printed houses around the globe and let you know the prices they charge. Excited? 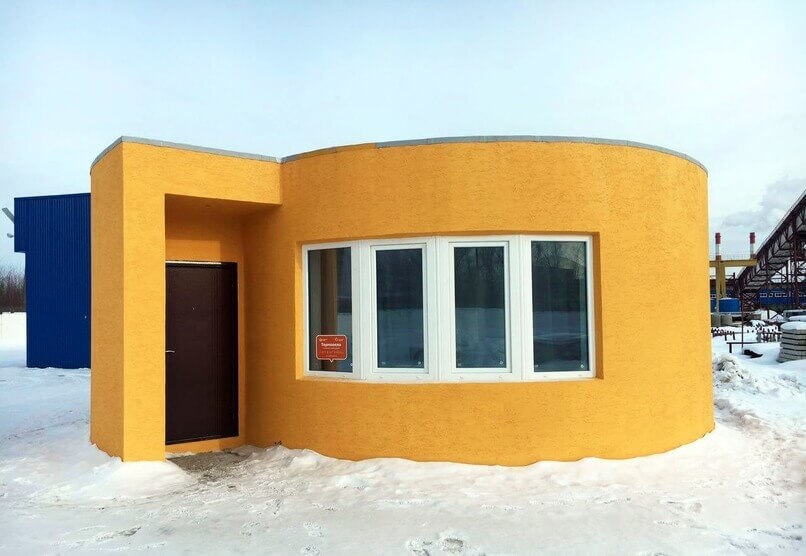 Apis Cor is a response to the stagnant construction industry that has not changed much over the years. They rely either on tightening wooden pieces together with nuts and bolts or assembling heavy bricks and blocks. Both of which take a lot of time! Also, the speed and quality depend on skilled labor, which is rare to find.

So to meet the growing demand for new housing across the world Apis Cor applies additive manufacturing to build houses robotically.

The company’s unique robotics arm distributes a concrete mortar to create the desired shape of a building.

With advanced level 3D printing technology, Apis Cor build houses in a way that was neither affordable nor possible with traditional construction.

Apis Cor is involved in ambitious projects such as project Frank, using which they claim “One man can build a two-story house in less than a day.”

Frank is a construction 3D printer that has a maximum print height of 10.5 feet, and a maximum single point reach of 16.5 feet. It is the first of its kind transportable of 3D printing houses on site.

For printing the foundation of a 3D-printed house, Apis Cor charges you $277. The charge of 3D printing walls of your 3D printed house is $1624.

Finally, the interior finishing 3D printing with Apis Cor will cost you $1178. So, overall a 3D printed house cost with Apis Cor comes around $10,150. 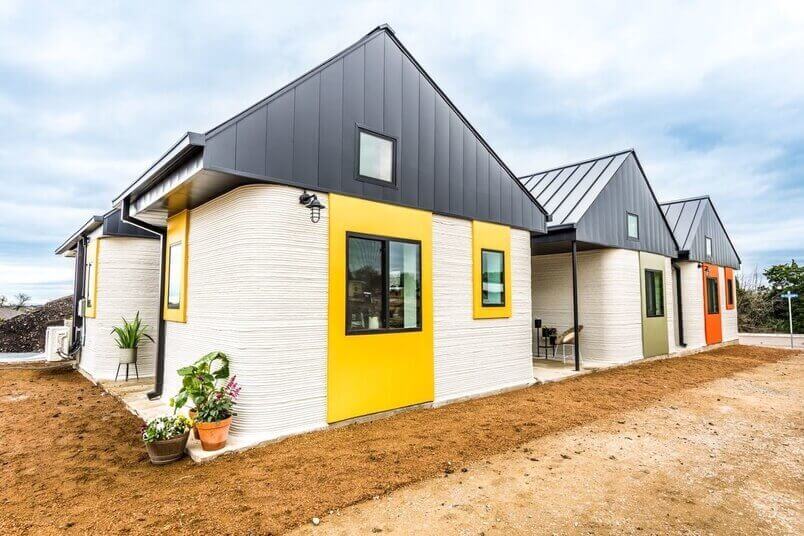 Working on a mission of re-imagining the approach to homebuilding for making it affordable and dignified, ICON works to solve three main problems:

In 2018, ICON became the first company in America to secure a building permit for building a 3D-printed home. The 3D printed house in Austin, TX stands as a proof of concept to drive towards the future of construction i.e. 3D printing.

ICON used the support they got thereafter to develop robotics, software, and materials as their core technology for their partners and home buyers.

Pricing and other details about the project

Vulcan is the name of the 3D printer designed by ICON specifically to produce resilient single-story buildings faster, more affordably, and with more design freedom.

The 3D printer has a printing capability to build approximately 2,000 square feet, its adjustable width lets you accommodate different slab sizes and can be transported in the company’s custom trailer with no assembly required.

To date, the company has built 3D printed houses in Mexico as well as Austin priced around $10,000. However, ICON is currently working to bring down a 3D printed house cost to $4000.

It is also noteworthy how ICON’s 3D printer Vulcan is also being utilized to create structures in space by NASA.

From the years 2008 to 2014, Winsun became the world’s first company to construct a 3D-printed house. Yingchuang Building Technique (Shanghai) Co.,Ltd. or so to say, Winsun is the leader of global 3D printing architecture, the company was founded on July 24, 2003.

It specializes in 3D printing architecture and D&R, production of building new materials for more than 17 years now. Winsun is a high-tech enterprise that first truly helps in achieving 3D printed architecture in the world.

Typically, a 10 meters wide, and 6.6 meters tall 3D-printed house with Winsun costs around $4800. The company has the ability to 3D print 10 houses in a single day.

Winsun aims to completely change the environmental damage of buildings and building materials. It is committed to becoming a world advanced manufacturing company that respects humans and nature.

The company dreams to manufacture building materials that can be recycled and achieve a sustainable cyclic economy. Winsun also believes in the idea that building energy consumption can be greatly reduced with construction costs by 50%. 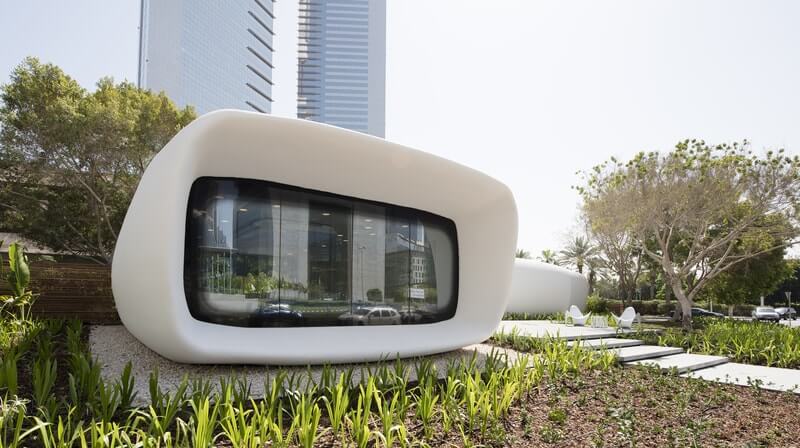 After completing their first project of building the PMO’s office in Dubai, Killa Design continued their journey into the field of 3D printed houses. Like Winsun, Killa Design too has twenty 3D printing constructions to its name.

The entire process of building the Dubai PMO office took 17 days to print. Although our list talks only about low-cost 3D printed houses till now, this 3D printed office is significantly more expensive and priced around $140,000.

But when compared with its cost if it would have been built via traditional construction techniques, it can be stated that 3D printing this office created it at a much lower price than that.

Killa Design provides you services of Architecture, project management, Interior Design, Engineering, and Master Planning. Each one of its 3D printed projects is versatile and stands out in its own manner.

Although the company does not reveal its way of 3D printing houses, it does reveal all its projects online for the clients that it has done, to date. 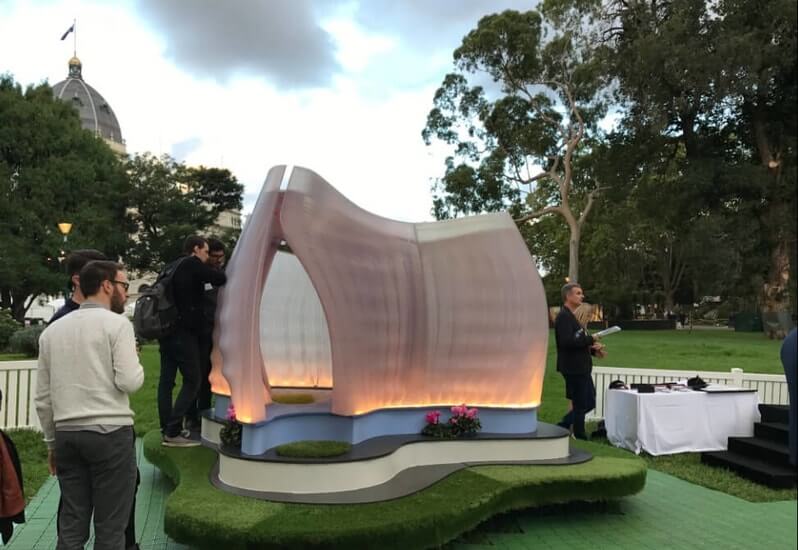 For almost 50 years FMSA Architecture is involved with designing and building environments that people can thrive in.

Their team of professional and support staff provides a quality ‘end to end’ service for projects in sectors including: a) justice, b) education, c) residential, d) infrastructure, e) government, f) aged care and g) commercial environments.

The RMIT Architectural Robotics Lab is an applied research group exploring the applications and implications of robotics in various fields.

Their research has led them to apply robotics to architectural design, building fabrication, assembly, and construction.

The lab operates for developing speculative research as well as the application of that research to industry projects. It’s situated within RMIT University’s Lab and operates from the Design Hub.

Details about their project

The collaborative work of these firms cannot exactly be termed 3D printed house, but a 3D printed play space. This one comes from the Australian charity Kids Under Cover.

A play space design was a result of a “Cubby House Competition” in 2017 won by FMSA Architecture won with their “Kooky Cubby.”

The project was 3D printed by RMIT University’s Architectural Robotics Lab in Melbourne, Australia, and showcased in 2017 at the Melbourne International Flower and Garden Show.

This project won an award and was later sold for $20,000, which was amazing in terms of raising funds for the charity. The structure of this play space is made from PLA and its floors are made of plywood.

Space is also filled with other, non-3D printed elements. Although it’s not a 3D printed house, we’ve included it on our list to contextualize the price of larger 3D printed structures. 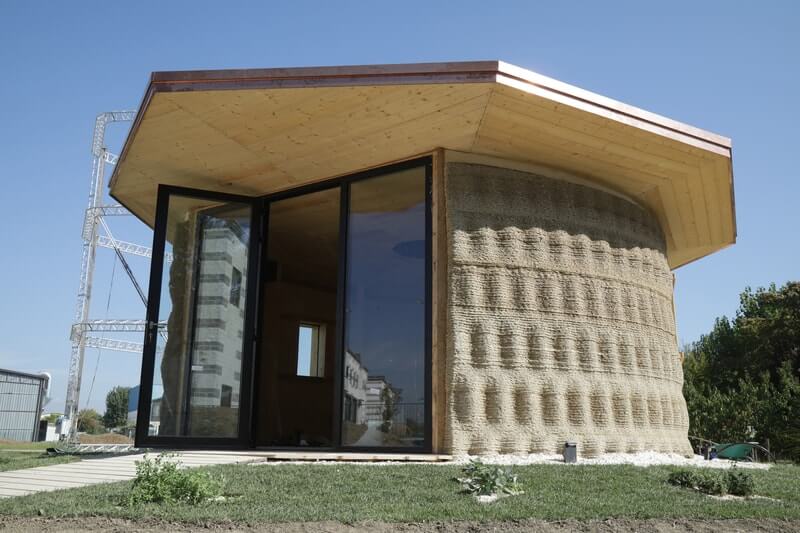 Before that, in 2016, the company had released the Maker Economy Starter Kit consisting of a giant construction system in an architectural scale enclosed in a single container that gives shape to a large and mobile technology park dedicated to 3D printing.

Formerly, WASP had also realized the BigDelta, a 12m high giant printer to build homes, complex research of which had been envisioned by convolti in the last three years.

WASP works on the aim of building ‘zero-mile’ homes, using materials found in the surrounding area. Such a 3D printing project requires the machine to be portable and features low energy consumption because, in large areas of the planet, there is no electricity at all.

Therefore, it’s a must that the 3D printers should be able to use renewable energies such as sun, wind, and water! And this is what the company is striving for.

Details about their project

The result of 240 hours of 3D printing was an impressive 9 square meters in floor space. It is important to note here that the walls are the only 3D printed part of the house; whereas the roof is made from wood supported by a timber frame which is also visible inside the house itself.

The specialty of Gaia house from other similar projects is its walls’ complex geometry and materials. The idea behind Gaia’s wall geometry is to provide natural ventilation through channels that are situated in the walls’ layers.

For insulation rice husks were poured into the walls’ inner layers keeping the inside of Gaia mild in both summer and winter. The price for structures inside this 3D printed house cost $900.

As we stated at the start of this article, a perfect estimate of a 3D printed house cost is still now possible because it depends on size and complexity

. A way to answer this question is that with the technology that we have in existence, it is possible to build a 3D printed house that costs somewhere around $40,000.

Although there are many high-end projects like the Dubai office that we mentioned in our list, the overall 3D printed house cost is becoming more and more affordable.

And that’s the positive sign of it. You can expect the cost to go even more towards the lower end. This is because; 3D printing technology is becoming much more accessible than it was. Also means, that if currently, the luxurious 3D printed house costs $100,000, they are going to be cheaper in the future.

More and more companies are associating in the field to innovate and work with much less hazardous materials than cement, which is a very optimistic sign for the environment as well.