If you are looking for a 3D printer that can provide you with considerable build volume, decent print quality and faster than others, Dagoma Neva Magis is worth checking out.

Neva Magis is an FDM 3D printer having a Delta construction. The printer offers a considerable build volume of 180 mm * 180 mm * 200 mm along with an XY printing accuracy of 0.2 mm. It prints objects at a print speed ranging anywhere between 30 to 100 millimeters per second.

The machine can withstand a maximum extrusion temperature of 270 degrees Celsius. It features an automatic calibration system that frees users of the troublesome job to adjust the nozzle height to print the bed according to the geometry of the part. The printer manufacturer has constructed this machine, especially for home users.

But what does the printer offer specifically that differentiates it from others in the same price range? Let’s find out by going in-depth about this desktop 3D printer.

The printer is equipped with advanced features such as filament detection and resumes print function. Both of these features ease user’s interaction with the machine by alarming them when they run out of filament as well as saves the work progress during the electricity outage.

Setting up Neva Magis is a piece of cake; it does not take much time and effort. Following the guide available on the internet easily leads to the start of the 3D printing process. Also, the printer hosts a simple a reliable mechanism that delivers a high-quality outcome. Moreover, the software is a major plus as it lets users bring their imagination to it.

Below mentioned are more striking features that separate the printer from a list of others available in the same price range.

As mentioned above, Neva Magis has a Delta-type construction. Meaning that the print bed is neither rectangular nor square, but triangle in shape!

The movement of the print bed is supported via rails that are attached to the pillars which are supported by the base at three different ends. Using such a supported design, users can create different types of geometries consuming shorter print times.

This feature is a major reason why Neva Magis’ setup does not consume much time like every other printer’s do. Users can get away from the tedious process of tightening and loosening the screws until the perfect nozzle height is set according to the print bed. Thanks to Dagoma for putting in place an automatic calibration system in Neva Magis.

This feature guarantees the precise lying of the first layer on the print bed. Note that the first layer of any print is considered to be the foundational layer. And if that’s printed accurately, the printing of other layers is not that difficult. So, automatic calibration is a way to safeguard the good quality of prints and not just minimizing efforts.

Let’s say you are in the middle of printing an object and the printer suddenly stops 3D printing because you’ve run out of filament. But, you don’t get notified that the reason why your machine has stopped is that the filament is used up.

This situation would lead to you checking on various factors that can lead to the sudden stopping of 3D printer filament which would consume so much time and effort.

Neva Magis hosts a filament detection system that notifies you of the filament status and also alarms you when it gets finished. The optimized detector helps you replace the filament spool and immediately get back to the 3D printing process within minutes.

The three main parts of the FDM 3D printing process are:

Most of the FDM 3D printers do not pay individual attention, especially to the third party. But that’s not the case with Neva Magis.

Dagoma has paid special attention by putting in place an ultra-fast cooling fan that will assist users to get quickly to post-processing of the 3D printed part. The fan operates at a blisteringly fast speed of 11,000 revolutions per minute.

Such a characteristic leads to an overall decrease in the print time and thereby optimizing the production.

Dagoma has equipped Neva Magis with a standard BuildTak build plate that can withstand high temperatures. Because of which users can juggle up with their choice of 3D printing filaments. One can choose from a long list of PLA, PETG, PET, Nylon, Flexible Filaments, ASA, and so on…

This offers users more variability rather than printing only with the most popular materials such as ABS and PLA.

Neva Magis has an ultra-fast setup procedure that can be completed within minutes. It is a plug-and-play desktop 3D printer that can be turned on for 3D printing by just placing it in a dedicated space at your home or office. Also, it weighs just 4.3 kilograms so imagine how easy it is to transport the printer from one place to the other without any hassle! 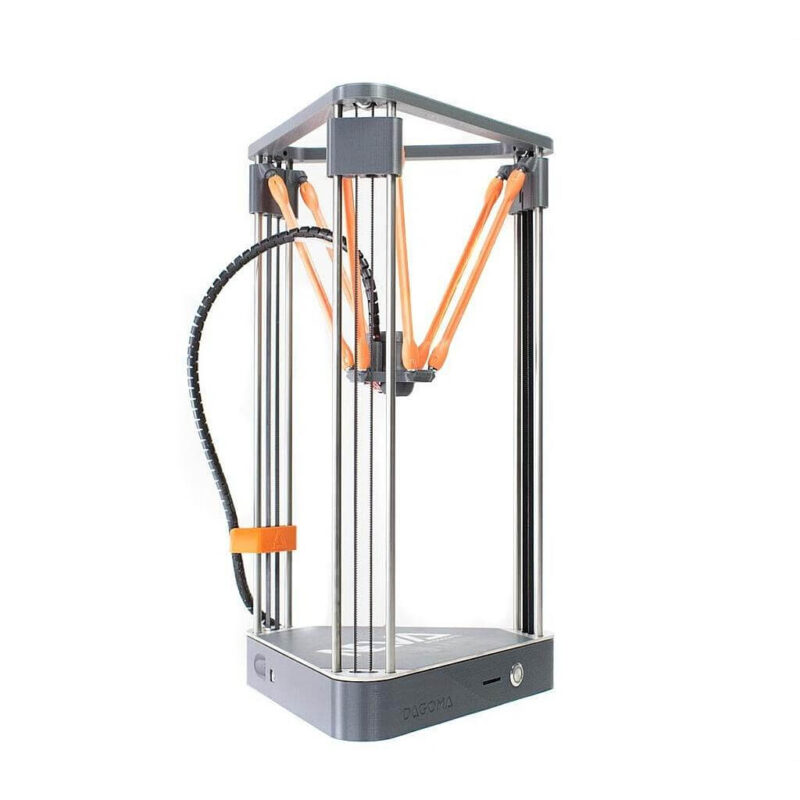 The printer can resist a maximum temperature of 270 degrees Celsius because of which it permits users to print with numerous filaments such as PLA, Composite, Wood, PETG, PET, Nylon, Flexible, Metallic, Glitter, ASA, etc of 1.75 mm diameter.

The machine features a nozzle diameter of 0.4 mm and its melt flow rate makes up for a print speed ranging anywhere between 30 to 100 millimeters per second. Each and every object made on the printer has a standard mini layer height of 100 microns. The X/Y tolerances of this machine are approximately 0.2 mm.

Eccentric to other printers in the same price range, Neva Magis has an automatic filament insertion. For solidifying the 3D printed parts, the machine houses a fan that undergoes 11,000 revolutions per minute.

The printer manufacturer recommends the operating temperature of Neva Magis be anywhere between 18 to 28 degrees Celsius. The machine offers an XY accuracy of 50 microns, whereas Z accuracy of 12.5 microns. 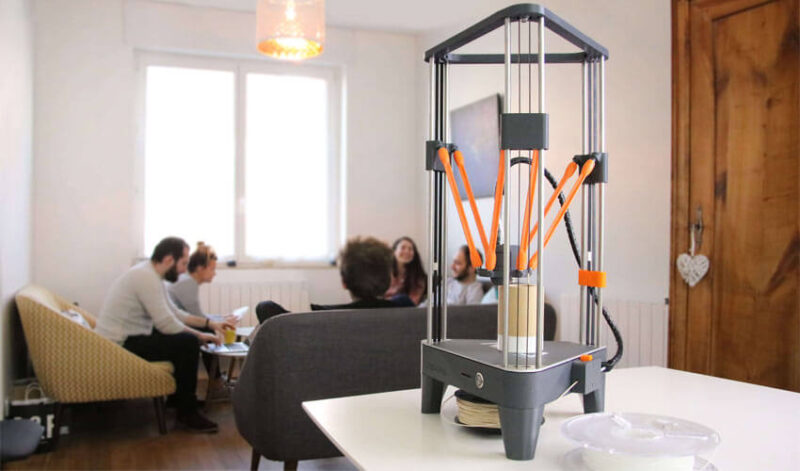 The printer arrives in a double package for preserving the hurdles of transport. In the box itself, users will discover the worked packaging of NEVA with their slogan “L’impression 3D s’invite dans votre salon.” At first sight, it’s amazing to figure out that there exists a 3D printer with 305 mm * 275 mm * 535 mm in proportions, weighing only 4.3 kilograms.

Alongside Magis 3D printer you get:

There is also an optional protective case that users can buy for a price of $198.80. Not only does it optimizes the print quality, but also regulates the temperature inside the printer.

After unpacking the printer it’s easy to follow instructions that are printed on the “First steps” guide available online on Dagoma’s website. Herein, everything starting from the very basic editing of the machine to first impressions is explained in a neat manner. The complete setup of Neva Magis takes no more than three minutes.

You need to start by connecting the six orange arms that hold the print head. Note that do not bring the screwdriver while doing this step because they are magnetized and come clipped. In fact, please be careful to not raise your head upside down otherwise the arms will come off during the first calibration.

After having done so with all those precautions, the calibration step needs to be performed. This is fairly traditional and consists of checking the distance between the nozzle and various points of the tray. The entire step is performed automatically.

With the calibration accomplished, the users will have to load the filament into the feeder present at the base of the machine before it starts getting extruded by the head of the printer. Finally, Neva Magis is ready to print. 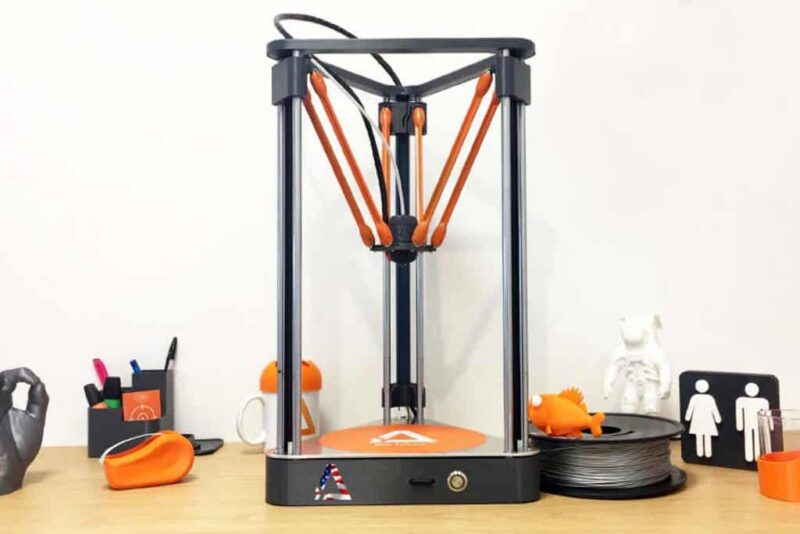 FDM 3D printing technology is that method wherein layers of materials are fused together in geometry to create an object.

The material i.e. solid filament is melted past its glass transition temperature and then extruded in a pattern next to or on top of the previous extrusions, depending on the part geometry. One after the other, layers are laid down to form a finished part. After which, they are cooled either by the manual cooling method or natural cooling.

Normally, the cost of 3D printing a part or functional prototype depends on various factors starting from the part geometry, type of filament with which you are manufacturing, cost of it, level of infill needed in building that part, and support structures if any. 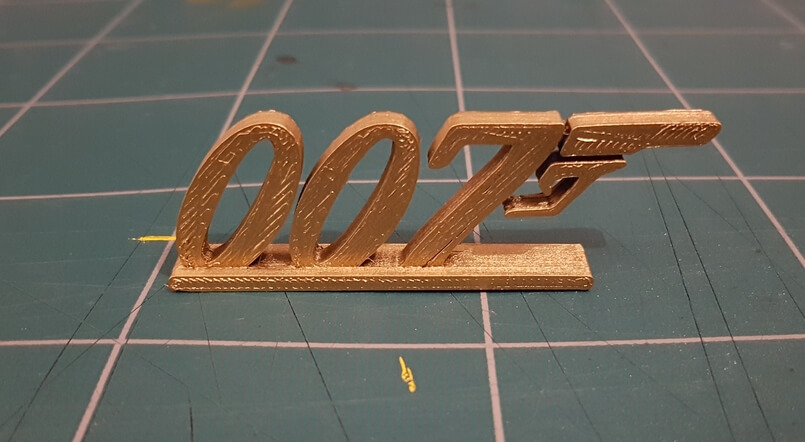 If you are following the guide, the first part that you’d be asked to print is a candle holder. Printing it with PLA filament takes nearly about two hours and the results are very satisfactory. Smooth surfaces without any uneven marks. When you go on 3D printing other parts with more or fewer intricacies, the print results are still positive.

Even while printing parts with walls, overhangs and extreme detailing the printer manages to deliver a surface condition that is commendable. Minor flaws can be corrected by adjusting the extrusion temperature and also changing the parameters on Cura helps.

Dagoma offers the most common open-source software, Cura, for controlling their printer. Magis hosts an improved version of Marlin firmware so; you can freely update the firmware with the software specially developed for the printer, called Dagom’App.

The overall experience of working with this software is good. It’s designed keeping in mind all kinds of users. It assists users while creating support for their design and also highlights the flaws in it.

The application runs smoothly on Windows, Mac Os as well as Linux. The file formats that the software is compatible with are STL, OBJ, etc.

The Technical Support section lets users access the printer’s knowledge base, create a support ticket, check its status, and activate 21 days of training. Apart from this, users can reach out to the technical team of the printer via call or email.

Below mentioned are the key factors about the printer.

3D Print Speed: Parts that take more hours to build on other printers can be created within relatively less time.

3D Printer Capability: Beginner-level users can learn the simple 3D printing technology and get to build parts for their home as well as office use.

3D Printer Practicality: Neva Magis hosts some of the most straightforward features that make working with the printer a joy ride.

3D Printer User Expectations: The machine manages to stand upon not only the novice’s expectations but also the professional designers in the field.

Overall, Neva Magis surprises everyone by offering tons of user-friendly features that make the work very simple even for amateurs. Integrated with seamless software, it allows users to alter the print settings even at the very last minute. Moreover, getting an FDM 3D printer with Delta construction at this price is in itself an anomaly.

So, if you are looking for a 3D printer that can provide you with considerable build volume, decent print quality faster than others, Neva Magis is worth checking out.

[year] How Much Does a 3D Printed House Cost?