3D Printing with a lot of different materials is possible now. But as we all know it, researchers are one such group of people whose work is to keep on discovering more and more possibilities.

One such group of researchers have recently achieved commendable success in the concept of 3D printing with wood material. They are based at Columbia University.

Overview of the Experiment 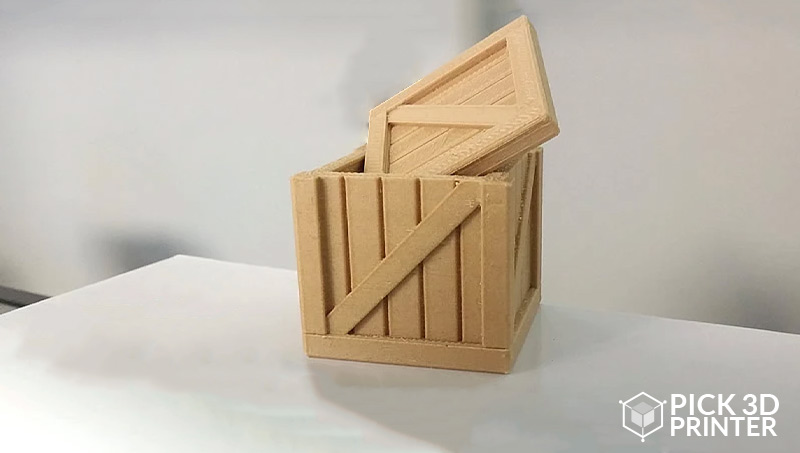 According to them, “The final printed object closely resembles the original wooden block both in its external appearance and in its internal color pattern, as confirmed when the block is cut or broken.”

The color was an important aspect of their experiment so, the engineers controlled the color value of each point. This was for producing their digital wood. But the engineers emphasized how the same technique could be used with different material properties, such as stiffness of the wood.

The engineers concentrating the talk on this idea say,” as voxel printing results in intricately arranged material particles throughout the resulting object, it offers designers nearly limitless manufacturing possibilities.”

As written by the researchers in their report,” However, to fully exploit its immense potential, the design tools and paradigms must be updated accordingly.”

The Stratasys printer and Hewlett Packard’s Multi Jet Fusion, according to the researchers, are capable of voxel printing. But it is currently difficult to prepare the printing files because of the lack of design tools and processes.

The researchers foresee a future where voxel printing will be wider than what it currently is. And will allow makers to download files as easily as we can currently access a two-dimensional stock image of wood.

Another project related to 3D Print Wood was the Bartlett-designed Voxel chair, which has an intricate internal pattern that is rendered in one continuous line of plastic. And for those who do not know what voxels are.

They are like pixels in 3D space i.e. the smallest elements into which an object can be divided into the design process. With this printing process, the designers can specify the qualities they want at every point within a 3D space.

The Idea to 3D Print Wood 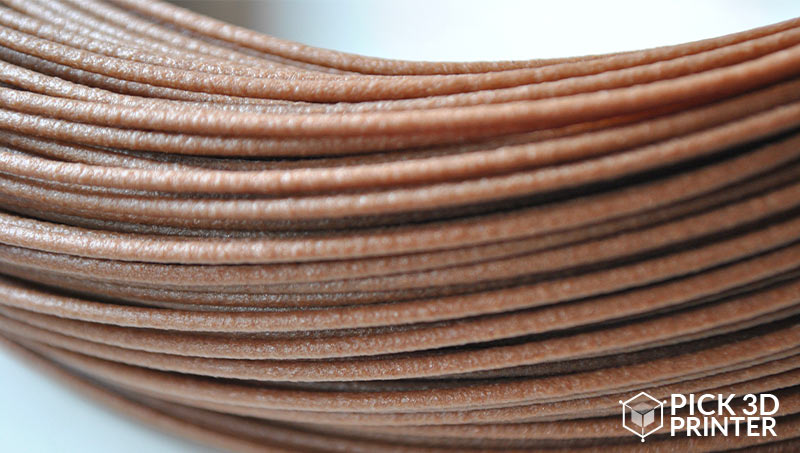 If anyone tells you the manufacturing of wood by 3D printing procedure is as easy as it is for manufacturing it with another traditional manufacturing process, do not believe it. We are not exactly at that stage wherein things are that easy, but we are getting there.

Since 2012, 3D print with wood filament has been possible. But this wood filament is not like any other ABS or HIPS filament i.e. completely homogenous. It is heterogeneous. It’s a PLA filament that contains wood fiber.

The parts or functional prototypes printed using this 3D filament looks and feel surprisingly wood-like. And this idea has completely changed the views of people and manufacturers to 3D print wood.

Many filament manufacturers offer their take on the wood or PLA filaments, with different species of wood being represented. But to be honest, the wood filament is still just a temperamental material, searching for the potential for difficulties that it faces during 3D printing. Let’s look at the process that is employed for 3D print wood. 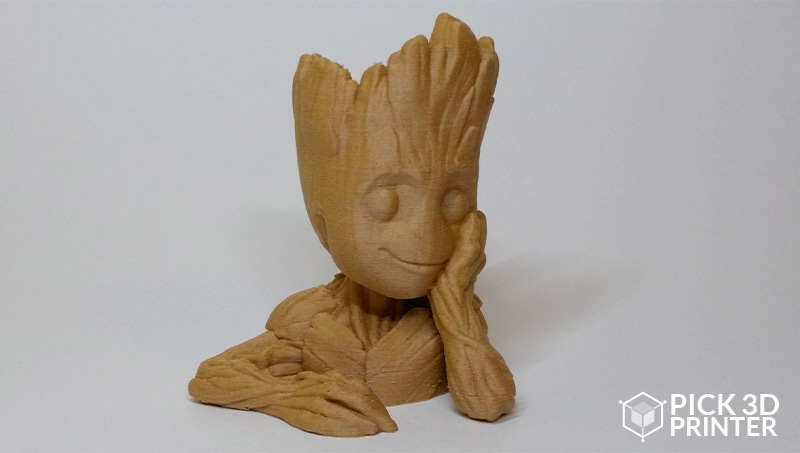 The name of the technology used for 3D printing wood is called Laser sintering. In this technology, the parts and functional prototypes that are built, are printed layer-by-layer. They are cured using a laser that draws thin lines on a powder bed.

Doing this melts and bonds the powder with the previously already solidified layers model. Once the layer is printed, a new layer of fresh powder is spread over the surface by a roller.

The printer used for 3D printing wood has a print chamber that is heated to just below the melting point of the powder. What the laser beam does is add the extra energy for melting the powder to form a solid model.

After the print job is finished, the outcome is a big block of warm powder combined with the printed models resting inside.

Wood is a material that well all know, is perfect for complex models because it allows for interlocking and moving parts. Typically, these are models that are going to be used for putting on your desk or on a shelf such as architectural scale models, figurines, and awards.

The technique used for printing wood gives lots of design freedom to create an object that would be hard to manufacture with traditional woodworking methods.

Wood Filament and Its Basics 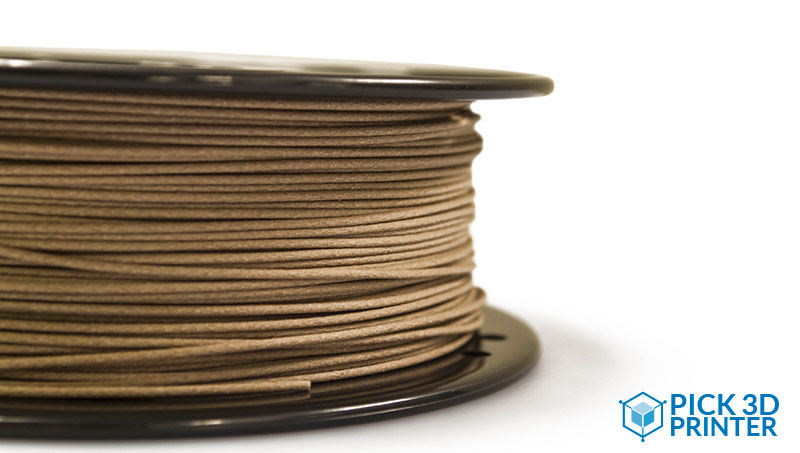 This additional delicacy is credited to the addition of wood that would break more easily. Before this, the filaments were made with sawdust, wherein the final prints looked more like cardboard than wood.

The advantage of these filaments was greater flexibility. However, in today’s wood fiber filaments, 3D printed objects can not only look and feel, but also smell just like carved wood.

It depends on the selection that you make of the brand, you can find them offering several different types of wood filament, like bamboo, birch, cedar, cork, ebony, olive, pine, and even coconut!

It is hard to differentiate between a filament that has wood coloring and the one that has actual wood fiber and not just wood coloring because the finish won’t be the same.

After discussing the experiment, the idea, the technology, and the filament let’s share the temperature settings that you need to deploy in your 3D printing to the 3D print wood filament. 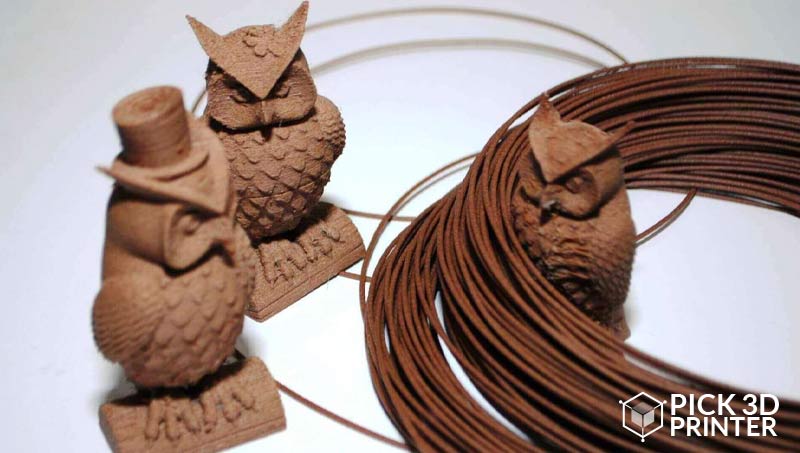 The first thing to beware of a wood filament is that it is highly flammable. So, have a constant observation of the hot end of the nozzle and do not let it get too hot.

Because if it does and isn’t extruding filament as fast as the level it has to do, the part that you are willing to print could be damaged or catch fire.

An intriguing thing that can be experienced with the wood filament to 3D print wood is that you can produce parts and functional prototypes of different colors and finishes using this filament. You can also experiment using different temperature ranges, even if it is a higher temperature the wood filament will produce darker shades.

For ensuring that clogging does not take place, the websites recommend equipping your printer with a nozzle that has a diameter of 0.4 mm. The nozzle should be kept cleaner than ABS or PLA nozzles. Having stated that about the nozzle, there are few things to take care of the build plate as well.

Although having mentioned the temperature range in which you should preheat your nozzle to 3D print wood, it is not something that is inevitable and must be done.

Even if you have a nozzle that is preheated and in a temperature range of 50 to 70 degrees Celsius, you can create quality prints with the wood filament.

Unless not provided with an adhesive surface with tape, glue stick, or PEI sheets, it is very common for parts and functional prototypes to slide while the printing is going on.

It is common to experience oozing and stringing when you start working with the wood filament. In such cases making little adjustments with the slider would turn out to be fruitful.

You can be fearless when it comes to adjusting the total number of layers while using wood filament. The benefit to 3D print wood is, it is good at hiding layers and hence the layer lines aren’t an issue.

Cura software and Simplify 3D have settings called combing and coasting respectively. While the former recalculates the movements of the nozzle for staying inside the printing, the latter reduces the pressure on the nozzle every time you reach the end of the printing process.

The former does lead to increasing printing time but preventing oozing and improving quality. While using negative values in the latter might increase the chances of reducing oozing and stringing.

Final touches on the part of the functional prototype made of wood can be given after the 3D printing process is completed. Something that you can do with wood and not with other filaments is color.

Yes! You can start coloring the part that is printed, during the printing process. Changing the print temperature is going to produce subtle color changes.

Sanding of a wood 3D printed part or functional prototype is very similar to sanding a normal piece of wood. It is advised to start to 3D print wood with a harder grit and gradually work your way to a softer one until the object is smooth.

Similar to real wood, objects that are 3D printed with wood filament are porous so, they easily absorb different dyes and stains.

In case you have access to a CNC laser machine, an engraver, or even a pyrography set, you can play with things more, in the sense, you can add features or drawings to your finished piece of work. You can also consider using a stain for producing different colors and surface finishes.

Other Researches in the Same Field 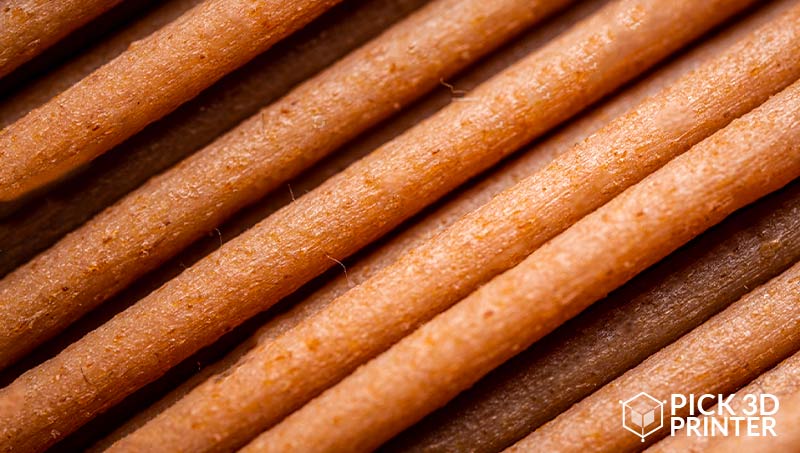 A group of researchers at the Chalmers University of Technology, Sweden, have succeeded in 3D print wood-based ink in a way that mimics the unique ‘ultrastructure’ of wood. If proven to be true, their research could revolutionize the manufacturing of green products.

They have, by emulating the natural cellular architecture of wood, present the ability to create green products derived from trees, with unique properties — everything from clothes, packaging, and furniture to healthcare and personal care products. The complete research of these people is available in the scientific journal, Applied Materials.

A few popular brands from where you can buy the wood filament to 3D print wood are ColorFabb, Fillamentum, FormFutura, and Polywood. Woodfill and Corkfill are the two filaments made on the facilities provided by Netherlands-based Colorfabb.

Timberfill is the name of the line of four different filaments provided by Fillamentum. Timberfill is claimed to be 100 percent bio-degradable. FormFutura produces seven different wood-based filaments that are based on birch, cedar, coconut, ebony, olive, pine, and willow.

All of these filaments are made with 40 percent of the wood particles. I hope, you got at least a little bit of guidance in exploring how to 3D print wood which is different and hence exciting than printing with regular 3D printing materials such as ABS, PLA, HIPS, and others.