The printer boasts itself as the first flexible and open printer that is made for the production of high volume ceramic and metal parts as well as functional prototypes.

Manufactured by a company based in the Netherlands, the printer is an epitome of manufacturing high-quality 3D printed parts and functional ...
Add to wishlistAdded to wishlistRemoved from wishlist 0
Add to compare
Check Price
Admaflex

The manufacturer of this printer i.e. Admatec is a Netherlands-based company that focuses on ceramic additive manufacturing. Admaflex 300 is a 3D printer that is designed as a flexible, having an open system.

This has been kept in mind for making parts and functional prototypes that are high in volume, be it ceramic or metal 3D printed components. The 3D printer is designed in such a way that it can monitor the complete process and send its report to the correct place at the correct time.

In short, it is integrated, has a production design, and offers an increased build volume too. There is also an automated feedstock system which enables users to fill the material whenever it gets empty. 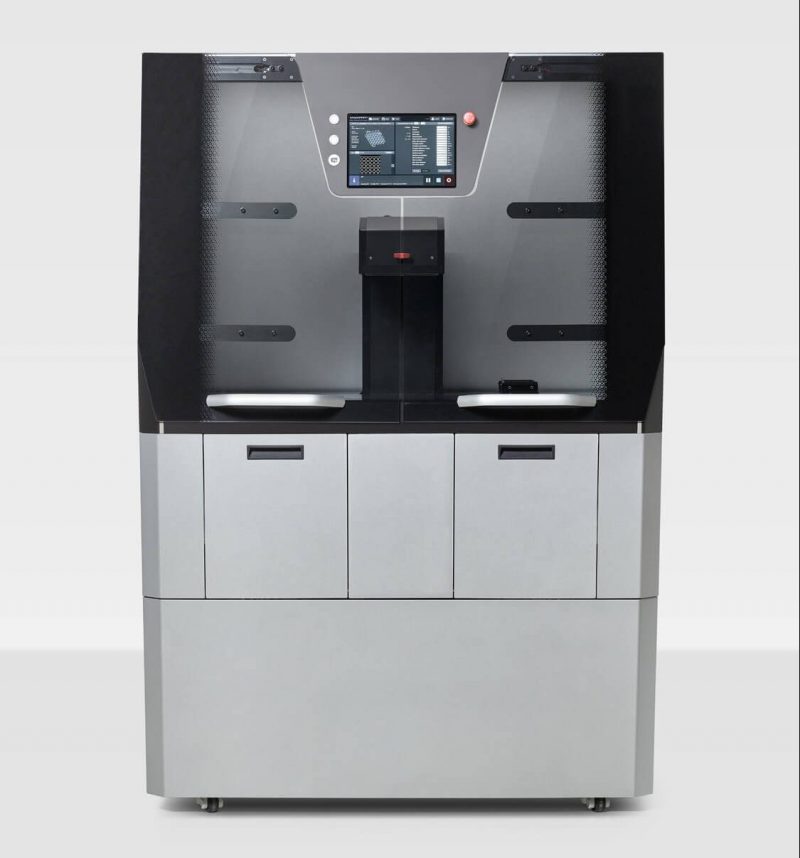 The printer boasts itself as the first flexible and open printer that is made for the production of high volume ceramic and metal parts as well as functional prototypes.

You can produce many types of components using this printer. Some of the materials with which you can produce parts and functional prototypes include large alumina components and silica cores and shells that are used in investment casting.

The inside of the printer contains its core which appeals to its modular construction. This core is something that makes the machine adaptable to future developments in printing such as multi-material printing.

The printer also gives its customers the facility to choose what resolution and build volume they want to print with.

In this article, you will be able to know about various aspects of the printer in depth. So, let’s start with the first aspect of this printer i.e. its Features. 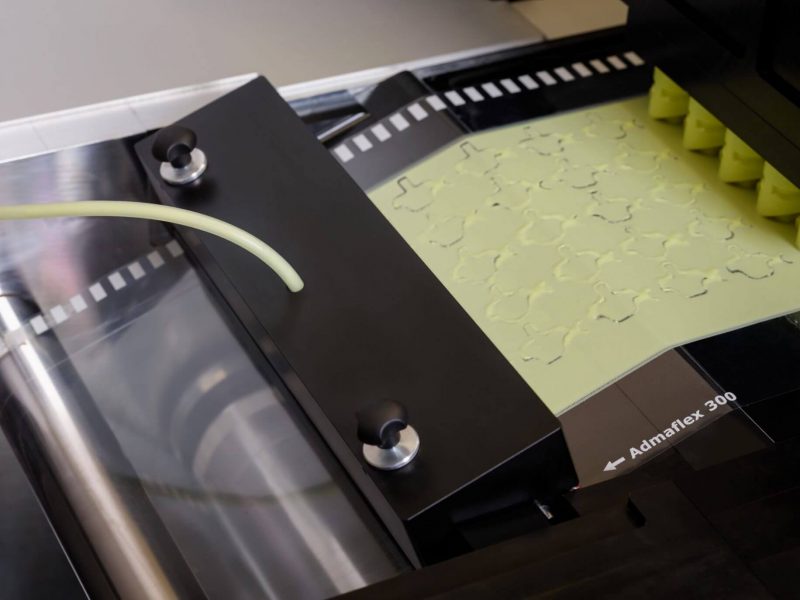 Having an open and modular system, the Admaflex 300 is a 3D printer that is compatible with various ceramic materials. It also allows its users to expand with its system.

You can also enable the metal 3D printing option that the printer has given. Doing this would enable you to manufacture metal parts and functional prototypes apart from the usual ceramics.

For a long time in the ceramic 3D printing market, there was a need for a printer that could produce alumina-based parts and functional prototypes on a large scale. The manufacturers of Admaflex, Admatec, have taken into mind the requirements of the market and come up with this printer.

Not only can you produce large-scale parts and prototypes using this printer, but also, silica cores and shells. In short, the requirements of customers present in the investment casting industry can be fulfilled completely.

And this we say, seeing the history of the company which had a machine that produced parts and functional prototypes but not of the same built volume, but lesser than what this one is meant to produce.

Below mentioned are such features of the machine that will make you wonder about its capability and innovation that it is meant to bring in the ceramic additive manufacturing industry.

As per the company’s Chief operating officer Jaco Saurwalt, it was the company’s customer’s feedback that led to the development of this machine.

Large build volume of parts and functional prototypes are used in the investment casting industry and many others. This is where the company was keen to focus on and this also how they have taken the industry one step forward.

Offering a monitoring facility in the printer is a very common thing nowadays in the 3D printing industry. You just need to install a camera at the place where filament, resin, or the raw material with which you are 3D printing is kept.

And that camera is connected to the screen of the device with which you wish to monitor. This does some good, but this does not do it all.

In the sense that, this camera isn’t integrated with other devices and parts of the 3D printer. Admaflex 300 offers an integrated monitoring procedure. This fulfills four functions in all.

To start with, it does give users a complete trace of the printing process. So you get to know the status of the part of the functional prototype that you meant to produce and you can also add or subtract anything that is in less amount or more amount respectively.

The other thing that this integrated monitoring procedure conveys to its users is temperature and humidity monitoring. In the DLP technology, a laser is used to cure the raw material that is used for manufacturing parts and functional prototypes.

So it is very necessary to note the changes in temperature and humidity, because if need be you have to accelerate or decelerate the printing process.

The third most important thing that you can monitor using the printer is foil usage. And the last but not the least, it lets you monitor time-lapse and gives you a real-time video capturing with its dual-camera system.

Parts and functional prototypes for investment casting can be easily manufactured

Admaflex 300 is an open printer, the first of its kind that is used to design primarily ceramic-based parts and functional prototypes. Investment casting is an industrial process that is based on lost wax.

It is one of the oldest casting techniques that is used for manufacturing. It is in this process that you require large parts made up of alumina, silica, and shells.

So, Admaflex 300 having a greater build volume in manufacturing ceramics, can easily manufacture parts and prototypes based on alumina, silica, and shells, which can thereafter be used in investment casting.

Not only alumina and silica cores, but you can also print using other materials on this 3D printer.

The manufacturers of this printer have designed it in a way that they can effectively handle materials that have high viscosity.

This system through which printing of many materials is possible is associated with ceramic slurries, they enable high reliability and speeds for continuous volume.

In short, whatever the client is looking for in a printer that can deliver he or she with large build parts and functional prototypes related to the ceramic industry is integrated with the feedstock system.

The excess material is automatically removed and whenever there is a need of adding some more material, users are acknowledged of that fact.

The benefit of having this system is that you can produce large components. Another benefit is that you will have a clean workplace, because the waste, the excess is managed automatically and not manually.

In this printer, you can easily switch from one material to the other without needing any adjustments. Due to this system, you get high throughput. 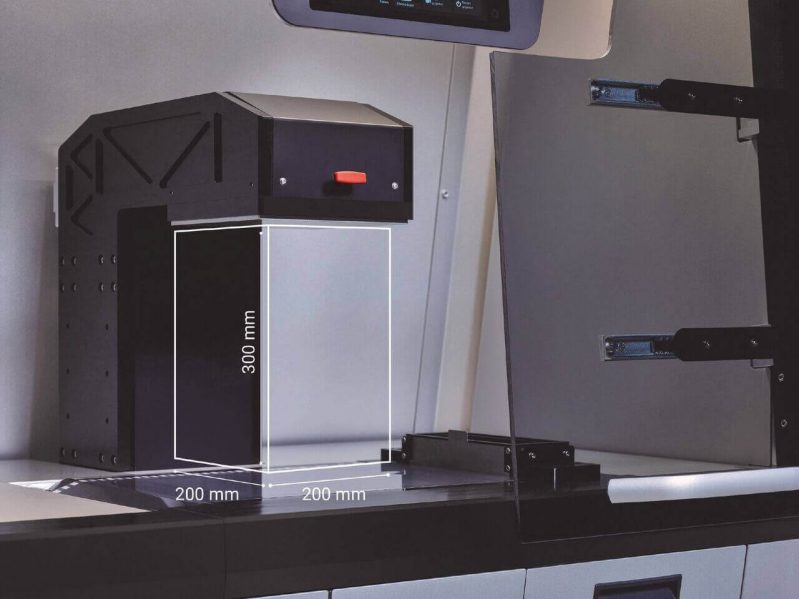 The minimum layer thickness offered by Admaflex 300 ranges from 10 micrometers to 200 micrometers. The printer has a build speed of 300 layers in one hour.

For getting the price of this printer, you need to ask the manufacturer about giving you a quote of the same. This you can do by two means, one being requested for the quote on the manufacturer’s website and the other being by calling them or emailing them. 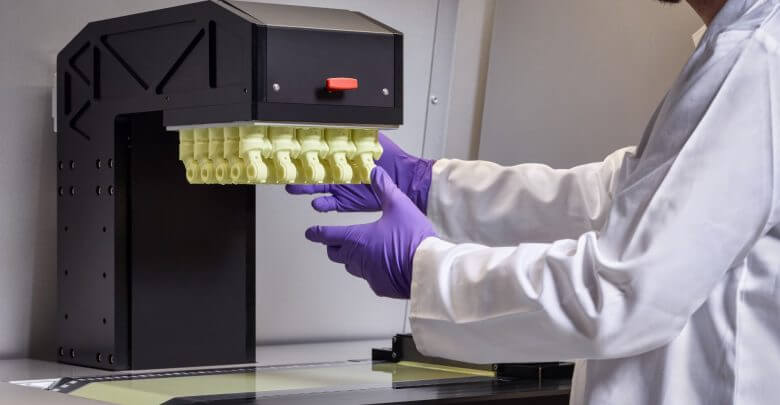 As mentioned above, this is an open printer so you don’t need to take care of the post process as complexly you do in a printer that comes with an enclosed frame.

From the front view, the printer looks like a machine that has two drawers in the lower compartment, whereas the upper compartment is transparent.

This touch screen interface lets you operate the complete printer and there are video tutorials present inside it which you can make use of.

When you will open the upper compartment, you will notice a chimney-like structure.

The height of this chimney will also be the height of material that you can manufacture and as mentioned in the specifications, this height is adjustable according to the parts that you wish to manufacture.

The printer comes fully assembled, all you have to do is read the instruction manual before starting to operate the printer. Conduct one or two test print to get to know the basics of the printer.

If you are someone who has already experienced DLP printing technology before, you can go ahead and directly start experimenting with your skills.

DLP printing technology does not utilize melting or laser source to cure the part or functional prototype that you wish to print. Instead, here light source of a specific wavelength is used to do the same.

So the printing cost if compared to FDM and SLA printers or even SLS printers is higher here. But the printing method is the same, as in, the printing happens layer after the other. 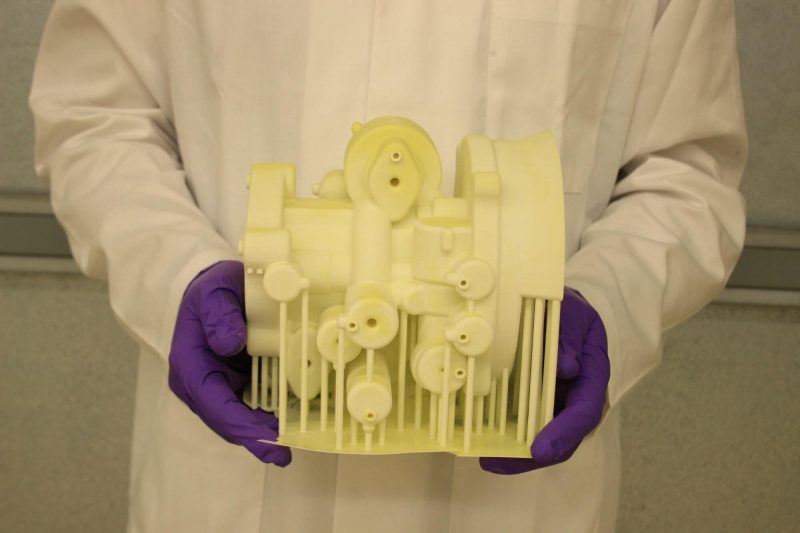 Investment casting which is one of the areas in which parts and functional prototypes that are printed are used requires dimensional accuracy. So, this printer can manufacture sharp edgy and curvy parts.

You can fill the contact form and the company would get back to you. Users can also contact them via phone or email or Skype, whatever suits you.

There are a few parameters that you have already seen mentioned below in brief.

3D Printer Capability: The printer can print with various materials.

3D Printer Practicality: The parts and functional prototypes produced by Admaflex 300 are used in various industries.

3D Printer User Expectations: Users who were looking for a greater quality of 3D printing would be satisfied.

Those who are willing to spend money on getting a quality part and functional prototype that has minimum layer thickness should check this printer out before making their choice.