The world of 3D printing is majorly dominated by ABS and PLA filaments. But they are not the only ones with which you can turn your ideas into reality.

There is PETG, TPU, TPA, HIPS, Ultem, PEEK, etc. In fact, when it comes to making parts with high strength that can withstand huge loads, these lesser-known 3D printer filaments actually come into play. In this article, we are going to discuss one such rarity i.e., HIPS 3D printing.

Chemically, High impact polystyrene aka HIPS is a material blend of polystyrene plastic and polybutadiene rubber. The mixture of these two polymers results in a material that’s both tough and at the same time flexible.

Overall, HIPS is very similar to ABS, but as you can guess by its name, it’s capable of withstanding much higher impact forces compared to ABS.

Also, it can be easily painted, machined, and is capable of working with a large number of adhesives. Above all, it’s safe for food packaging and has been being declared FDA-compliant for food processing applications.

What separates HIPS from other 3D printing materials? Where is it specifically the most used in and why? What are the points that you need to keep in mind while HIPS 3D printing? What can you do to print the material in a better manner than you already are? These are some of the key questions that we’d be answering in this article. 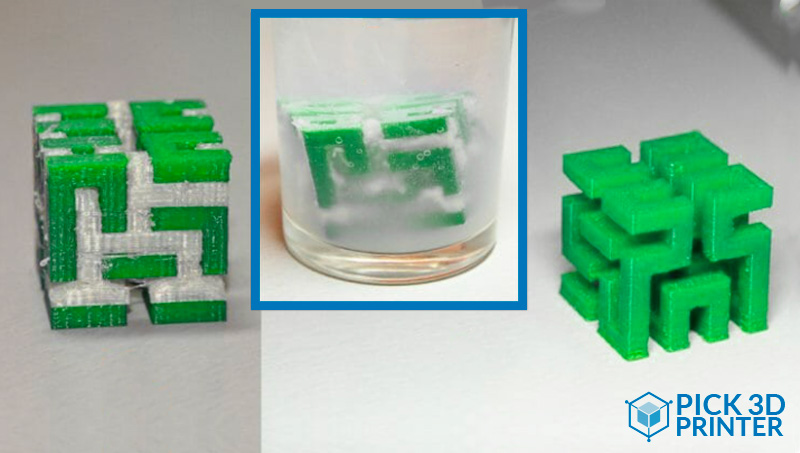 As mentioned above, HIPS is a graft copolymer that utilizes pure polystyrene and polybutadiene rubber.

So, you can guess the material has combined hardness of polystyrene with the elasticity of rubber to make itself a high-impact thermoplastic that is not only tough but also strong but not brittle. Commercially HIPS is known by the trade name Bextrene.

The data statistics of HIPS backs up its capability to be used in a wide variety of applications. HIPS has a specific gravity of 1.05 grams per cubic centimeter.

This is quite near to the density of ABS but lesser compared to other thermoplastics such as PLA or PMMA. The material has a Rockwell hardness of R 95 which, is again near to that of ABS, slightly more than PLA and significantly less than PMMA. It has a maximum tensile strength of 5801 psi.

It is widely used to manufacture toys and appliances, like product packaging and cases. In 3D printing, HIPS has left an impression of excellent soluble support material.

When is Support Material Needed?

Well, almost all 3D printers, by necessity, start 3D printing an object from the bottom of the design and then progress upwards.

Because of this typicality of process, when you have a design that needs overhangs, areas in the print job that don’t have any underlying support, it indicates a problem.

What Can Hips be Used for?

Obviously, it’s not possible for your printer to successfully extrude filament onto thin air. In such scenarios, HIPS can be used to provide the necessary support that the above-mentioned overhanging areas require.

Firstly, the printer will lay down HIPS exactly where the overhang will be and then lay the selected printing material beneath the top of the layer HIPS which will support the overhanging material and prevent: a) the warping, b) deformation, and c) collapse that would occur without the support.

After the printing is complete and the object has solidified, you can remove the HIPS by submerging the 3d printed object in Limonene.

After about 24 hours, the Limonene will have dissolved the HIPS thereby leaving you with a print job that has clean, crisp angles, corners, and overhangs, in short ready for application.

HIPS is mostly used as support material because it easily dissolves in limonene solution. So, unlike typical materials it eliminates the need for removal via abrasives, cutting tools, or any other such things that hold the capacity of damaging the 3D printed object. And you are left with no less-than-perfect print.

Limonene: It is a solution made with lemon peels and can be easily obtained from the market. What this solution does is, it can potentially damage 3D printing materials other than ABS. This is one of the chief reasons why HIPS is best paired with ABS.

What are the Key Features of HIPS?

As mentioned above, HIPS has similar properties to ABS, but is harder and hence can resist more impacts than the latter.

The material is specifically characterized by its comparatively high solubility in relation to certain chemicals.

This quality allows for a relatively smooth separation of the same when used as a support structure. HIPS has:

HIPS printing filament has a sort of versatility that is hard to find in any other. It is an excellent choice for soluble support material, prototyping, and as a general 3D printing material.

Interesting is when HIPS is compared with PVA (polyvinyl alcohol). And their roles as soluble support material come one against the other.

It quickly becomes apparent that the two are very separate from each other. The lower printing temperature of PVA makes it work much better with a material like PLA.

Whereas, on the other hand as mentioned above, HIPS’ dissolvable filament and ABS are more suited to each other!

Now that you are pretty much aware of HIPS as a material, it’s time to talk about the part that you’ve been waiting for.

What to Take Care of While HIPS 3D Printing? 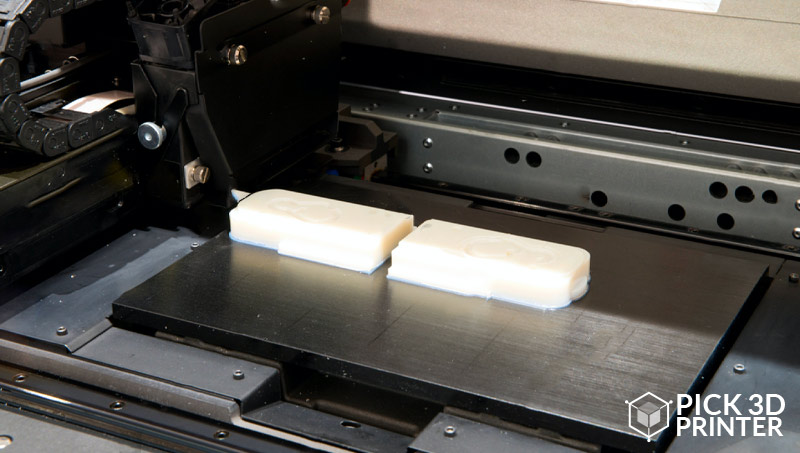 In case you are using HIPS as a support structure, it is recommended for you to have a 3D printer with two extruders. Both of which capable of reaching a temperature between 230 and 245 degrees!

Moreover, the printer’s heating bed should be able to reach temperatures between 90 and 110 degrees because HIPS tends to deform.

Experts also advise you to use a 3D printer with a lockable installation space to counteract deformation.

Majorly, you should protect your respiratory tract while being in the printing environment and ensure good ventilation. HIPS 3D printing can create toxic fumes such as styrene.

Once the 3D printing process ends, you should wait until the printed part has completely cooled down before starting to remove the supporting structures.

Because other materials can be sensitive to the chemical used for removing HIPS i.e. limonic acid after which, the component might be damaged.

Stating about the process of removing support structures with chemicals, it is advised to first remove large parts by hand, strictly because of the cost reasons.

One liter of chemical costs approximately 30 euros! Apart from this, when dealing with liquids of this type, you should observe strict protection rules.

For protecting your eyes, respiratory tract, and hands to avoid irritation! Some HIPS filaments include additives to make the original filament easier to print.

But these same additives are known to frequently make the material harder to dissolve and remove when you plan to use the material for support.

For improving bed adhesion, you can also consider using ABS slurry created by mixing pieces of ABS filament with acetone and then applying the mixture to your print bed surface.

Following them will reduce the chance of most common 3D printing problems associated with HIPS material such as warping and poor bed adhesion.

Application of Kapton tape on the top of your heated build platform will enable you to create an ideal surface for HIPS to adhere to.

It is to be noted how each layer of Kapton tape is about 0.1mm thick, so make sure to change this in your first layer settings with slicing software.

In one of the most popular slicing software, Simplify3D you can make this adjustment by increasing the global Z-axis offset on the G-Code tab of your process settings.

Moreover, PET sheets can also be applied over a glass bed for enhancing the adhesive properties while keeping the surface finish smooth.

Printing with a Higher Ambient Temperature

This can be done for keeping HIPS away from contracting rapidly. To increase the temperature surrounding the 3D printed part, you can enclose the built environment and allow the heated bed to slowly heat the air and take it to the desired temperature.

Modern 3D printers actually include a heated chamber out-of-the-box which makes this process even easier with less hassle.

In case wherein you aren’t able to enclose the printer’s build volume on your own, try using an ooze shield in slicing software.

Doing so will create a shell that encases your model, thereby allowing the air within it to stay at a higher temperature.

Additionally, the shield can also act as a wind block for keeping colder air from rapidly cooling your freshly extruded plastic.

Printing with HIPS can sometimes require surplus care to ensure that each layer of the print is safely bonded to the prior layer. If that is not the case, you may notice splitting or cracking between layers.

For improving the bonding between the layers, you can consider lowering your layer height or increasing the extruder temperature. Both of these amends will help increase the adhesion between layers.

What Are the Pros of 3D Printing HIPS? 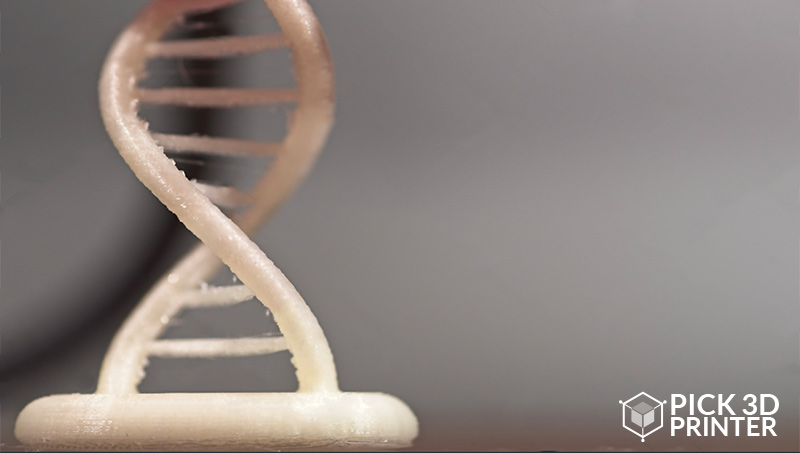 What Are the Applications of HIPS Filament? 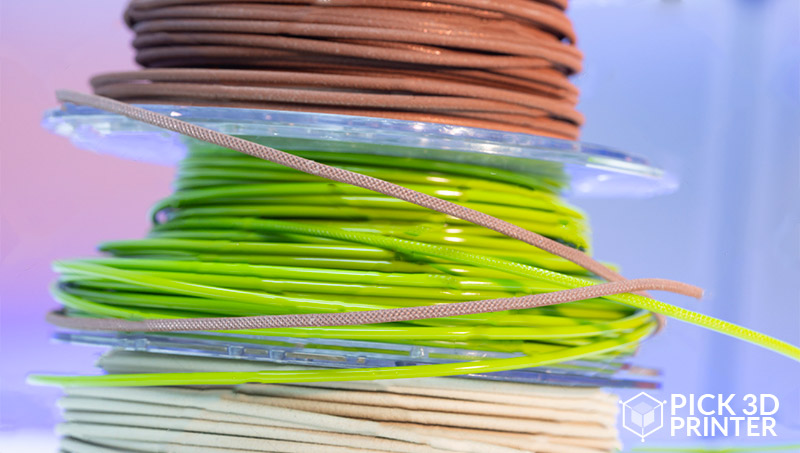 We suggest taking a look at our Best HIPS 3D Printers for more information.

It is not that HIPS 3D printing only has advantages. There are also some of the disadvantages of printing with this high-impact resisting material. Like, compared to ABS, HIPS takes more time to process.

HIPS 3D printing is more prone to warping for controlling which you need to use a heating bed and a closed installation space.

Another disadvantage of the same is the vapor that gets generated during printing and its toxicity on humans operating the same.

However, some people undermine HIPS only as a support material and that is wrong.

It is much more than a support material, when its mechanical properties are boasted it is ahead in the race of 3D printing materials than PLA and is a tough competitor to ABS.

Having stated so, the primary use of this material remains in making complex parts without worrying about their finishing. HIPS + ABS can make wonders!