BLB industries the box small 3d printer offers amazing print speed, build volume, and considerable print quality. Even with all that, its overall print process is so simple that even a first-time user of 3D printing technology would not find it absurdly difficult to grasp the printer's functioning.

Primarily meant for professionals, The BOX Small is a pellet 3D printer manufactured by BLB industries – a manufacturer based in Sweden. The printer offers a giant build volume of 1500 mm * 1000 mm * 1000 mm.

It makes use of a Fused Granular Fabrication method i.e. a variant of FDM 3D printing technology that makes use of plastic granules instead of filament for creating parts and functional prototypes. Such an eccentricity gives The BOX Small two edges over other printers in the same price range.

Firstly, it allows users to print with rapid speed rates ranging from about 1 kilogram per hour to 14 kilograms per hour. And secondly, it reduces the material costs as pellets are way cheaper compared to the plastic filament, resin, or powder. So, let’s go in-depth and explore various features that make the printer this functional. Excited? Let’s get started.

Apart from hosting a huge build volume, The BOX Small is overall packed with striking features that make your dealing with it smoothly and flexible. A fully enclosed print chamber ensures even heating and laying of layers at a maintained temperature.

Also, a heated bed lets the user reach the glass transition temperature of plastic granules in a shorter span of time than otherwise. Moreover, a 15 inches wide touch screen interface facilitates the overall interaction of the user. One-touch to control, monitor, and change various functions and settings on the printer is possible.

Below stated and explained are more such amazing features of the printer.

The BOX Small can be paired with two extruders, either E25 and E35. The former is compatible with nozzle sizes ranging from 2 to 8 mm, whereas the latter is suited with an 8 to 14 mm nozzle. Therefore users have enough choices for achieving various flow rates depending on the quality of the part.

E25 is capable of achieving anywhere between 1 to 5 kilograms per hour flow rate, whereas E35 can achieve a flow rate ranging between 10 to 20 kilograms per hour. Moreover, dual extruders mean that The BOX Small allows users to print with two materials at the same.

A huge contribution in providing excellent print speeds while producing parts and functional prototypes using The BOX Small is played by its heated build plate. It ensures that operators are able to reach the temperature about glass transition very speedily.

This is done because the build plate of the printer comes pre-heated. Also, this enables owners of The Box Small to print with a variety of different materials that require a relatively higher 3D printing temperature than others.

The machine’s body is equipped with a huge touch screen interface that is 15-inches long. Due to this component, it is possible to monitor and control various functions on The BOX Small immediately, without any human intervention.

A typical option of what all you can control is the print quality of the part by changing the print settings. Apart from that, the pausing, stopping, or starting of the print can also be controlled via the touch screen interface.

Apart from this, some last-minute design-related changes can also be made via the touch screen interface.

Normally, FDM 3D printers feature a cooling fan system for lowering down the temperature of 3D printed parts. Although The BOX Small is not based on FDM 3D printing but a variant of it, the printer features a unique water cooling system.

This system has its own benefits that outdo the limitations of the traditional cooling fan system. It allows you to uniformly cool the 3D printed part which leads to smoother surface finishes. Moreover, it is also faster compared to the cooling fan system. Therefore, decreasing the overall print time and also making it possible to allocate more time for post-processing.

Compatible with a Variety of Plastic Granules

BLB claims that The BOX Small is compatible with various common materials such as ABS, PP, PA, TPE, TPU, and PLA. Also, it is well suited with common fillers like Glass fibers, Carbon fibers, and Wood fibers. Moreover, the printer can be tested with other thermoplastics as well.

Such a consistency with a wide range of plastic granules provides enough options for users to manifest their design into reality. Also, do not forget the printer has dual extruders, therefore any one of these granules can be paired with any other to build a part that’s unique and more realistic as well as creative in nature.

This means printing parts and functional prototypes with a large build volume wouldn’t take much time. In fact, the parts that take ten hours to be 3D printed with other printers can be printed in half of the time using The BOX Small.

The printer provides an XY accuracy of 0.001 mm and a minimum layer thickness of 0.5 mm. It builds small as well as large parts involving support structures with dimensional accuracy.

The 3D printed parts have excellent surface finishes with layer heights barely visible with naked eyes. Thanks to the precise management of temperature and unique uniform Water cooling system instead of a cooling fan.

It features a huge build volume of 1500 mm * 1000 mm * 1000 mm which permits operators to build either a single large part or too many small parts in one go. The machine displays an extraordinary build rate of 14 kilograms per hour.

A fully enclosed print chamber maintains once achieved temperature for a longer time. Moreover, the printing process is given a great head start with a heated print bed that enables the reaching glass transition of material quickly.

Assisting users interacting and managing stuff on the printer is a 15-inch long touch screen interface. The printer can be connected using an SD card for transferring files over it.

Interested customers need to request a quote from the printer manufacturer to know its exact price. 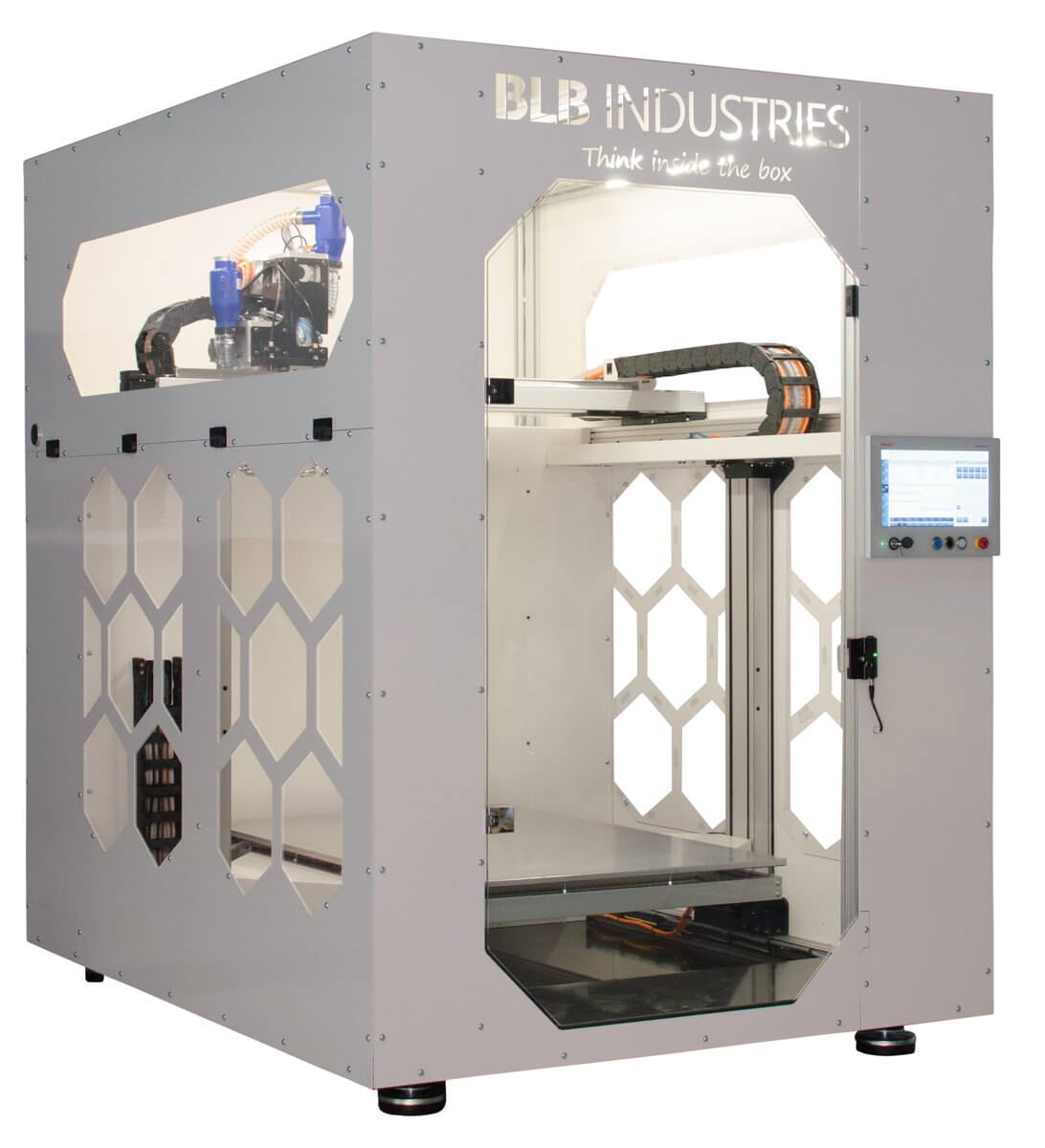 Typically the printer’s looks can be related to a refrigerator of a low height. The only dissimilarity not many refrigerators have a transparent front display, whereas the BOX Small does have so. Its print chamber can be viewed from the front and accessed via a door. The printer’s physical dimensions are 2400 mm * 1800 mm * 2500 mm.

Being an industrial 3D printer, the BOX Small comes completely assembled like others. All you need to do for starting 3D printing on it is connect it to the power supply, run the initiation process, transfer the file using an SD card and that’s it. 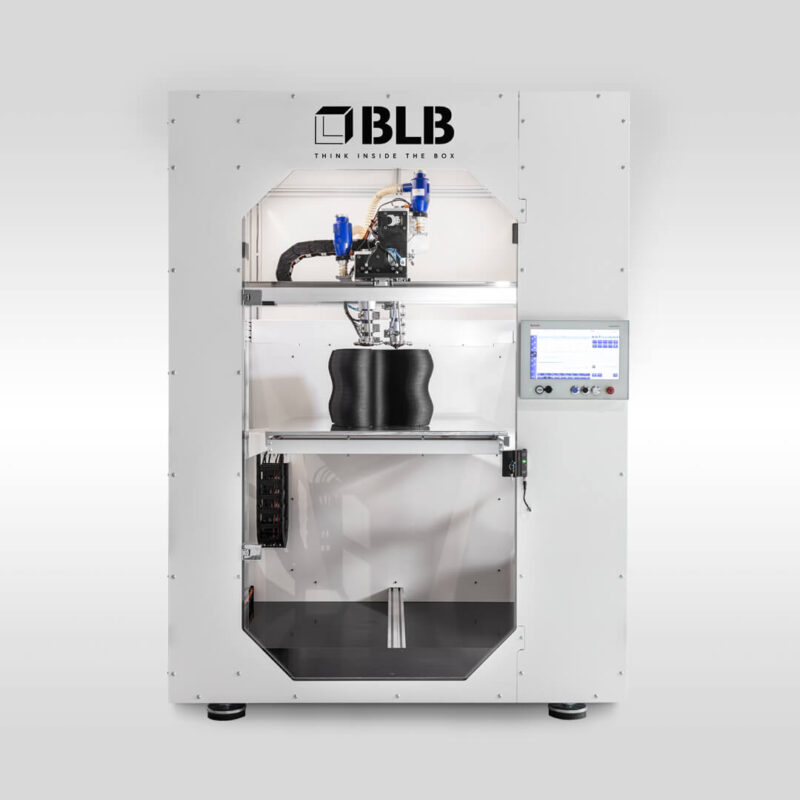 Like in a FFF 3D printer, the fusion of a solid plastic filament takes place, so in an FGF i.e. Fused Granular Fabrication 3D printer, the fusion of granules of plastic happens. The complete workflow is similar. It starts with heating the plastic in the extruder and ensuring it crosses just above its glass transition, therefore, melting the plastic.

The liquid plastic is then allowed to pass through the nozzle system onto the print bed depositing a layer as mentioned in the designed file. One by one the layers are deposited until the complete geometry is printed after which it is allowed to cool down and post-processed, if need be.

Generally, the cost of 3D printing a part with FDM 3D printing technology is lower compared to other technologies. The same applies to FGF 3D printing as well because they use the same material in different forms. However, the cost depends on various factors such as the part geometry, the type of material you are 3D printing with, support structures, cooling method, etc. 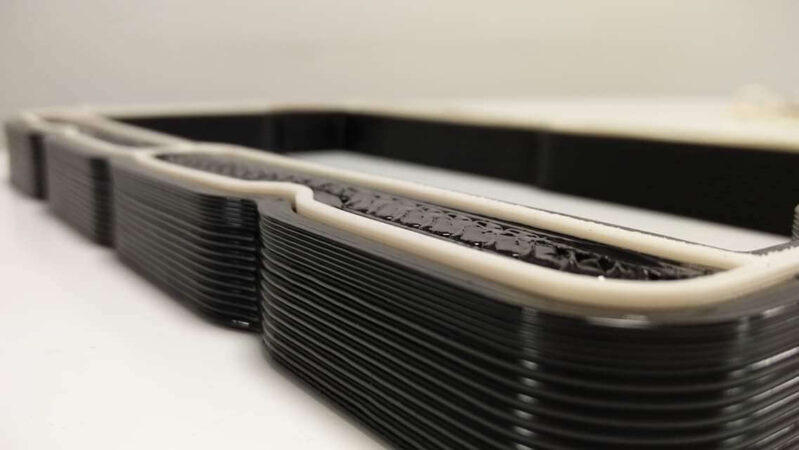 The BOX Small offers an XY accuracy of 0.001 mm which is the best for an industrial FGF 3D printer. Also, it delivers parts with a minimum layer thickness of 0.5 mm which is really small to witness when viewed with the naked eye. Overall, the printer produces dimensionally accurate parts and functional prototypes with ease.

The machine is compatible with IndraWorks Operation software for designing. As far as slicing is concerned, it can be paired with the renowned open-source software name Simplify3D. Designing and slicing objects isn’t a complicated process thanks to the user-friendly interfaces of the modeler and the slicer.

Much of the documentation related to the printer can be downloaded from the company’s website. For troubleshooting, the printer manufacturer does provide a phone number and email that users can reach out to. In case you have purchased the machine from any of its distributors, you can contact them too if you need any assistance with 3D printing.

Below mentioned are the prominent factors which are good to keep in mind while buying the BOX Small.

3D Printer Cost: Although the exact price of the printer can only be known by requesting a quote from the manufacturer, it must be on a higher-end as it’s an industrial 3D printer meant for manufacturers in the field.

3D Print Speed: The BOX Small displays a blistering fast printing speed of around 600 millimeters per second. Overall, it offers a build rate of 14 kilograms per hour thereby allowing users to create huge parts in hours.

3D Print Quality: With speed, the machine also delivers decent print quality to its users. Parts and functional prototypes with excellent surface finishes are no new with the BOX Small, thanks to its enclosed print chamber and water-assisted cooling system.

3D Printer Capability: Professional users can create huge parts with good print quality at a commendable speed using the printer. It has amazing features taking care of the most important aspects of 3D printing an object via FGF 3D printing technology.

3D Printer Practicality: The BOX Small is compatible with a wide range of rare as well as popular granules. So, designers have the freedom of playing with a lot of materials, and thanks to the printer’s dual extrusion system one can also mix them in a single print.

3D Printer User Expectations: Manufacturers of small and large parts will love to work with a simple variant of FFF 3D printing technology on the BOX Small. It does not have a complicated process of 3D printing like SLA, SLS, MJF, or other 3D printers and yet manages to deliver decent print quality and huge build volume.

The BOX Small has many noteworthy features that you would not generally encounter in an industrial-grade FDM 3D printer falling in the same price range. It allows superb thermal management with an enclosed print chamber, uniform water-assisted cooling system, and is compatible with lots of plastic granules.

The printer offers amazing print speed, build volume, and considerable print quality. Even with all that, its overall print process is so simple that even a first-time user of 3D printing technology would not find it absurdly difficult to grasp the printer’s functioning.