HIPS filament can be used in 3D printers based on FDM or FFF technology. Compared to other FDM 3D printer filaments such as ABS and PLA, HIPS is lighter in weight and also has a smooth and scratch-resistant surface.

The abbreviation HIPS is used technically in replacement of High Impact Polystyrene. Polystyrene PS is also known as one of the oldest thermoplastics worldwide currently.

The material is created by the process of polymerization of monomeric styrene. Among the materials’ other applications, it is also used in 3D printing as HIPS filament, mainly for the production of support structures for overhanging objects.

HIPS plastic material is specified for low strength structural applications wherein impact resistance, machinability, and low cost are prerequisites. It is also more frequently used for machining pre-production prototypes because of its excellent dimensional stability and easy to fabricate paint and glue capabilities.

Having stated so, when it comes to buying HIPS filament there are many choices and they can confuse anyone.

In this article, we bring to you some of the reliable filaments handpicked from the innumerable ones available in the market. Apart from that, we will also take you through the points to take care of while buying and storing the same. Before getting to recommendations, let’s go through some basic tips for using HIPS filament.

What to Take Care of While Printing with HIPS Filament?

After going through points to take care of, it’s time now to list down our list of HIPS filament brands that are renowned worldwide and can be trusted hands down.

For more information about Printing with HIPS Filament, check out this Complete Guide to HIPS 3D Printing.

What Are The Top 6 Best HIPS Filament Brands?

We have also mentioned the printer settings that are advised to follow the corresponding HIPS filament manufacturer with their descriptions. 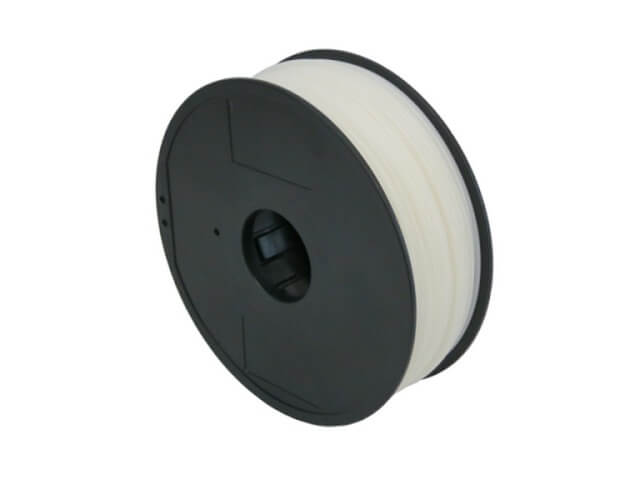 Arguably one of the best filament manufacturers on the market, MatterHackers is a Californian company offering two colors of HIPS i.e. black and white. Both of which are available in 1.75 mm and 2.85 mm diameters.

This filament is sold in 1-kilogram spools, and like all of the company’s other products, it’s guaranteed to be of high quality.

Founded by people with a passion for 3D printing technology, MatterHackers works to make the process of digital fabrication more accessible to: a) educators, b) engineers, c) manufacturers, d) small businesses, and e) tinkerers the power to bring into reality, your ideas. 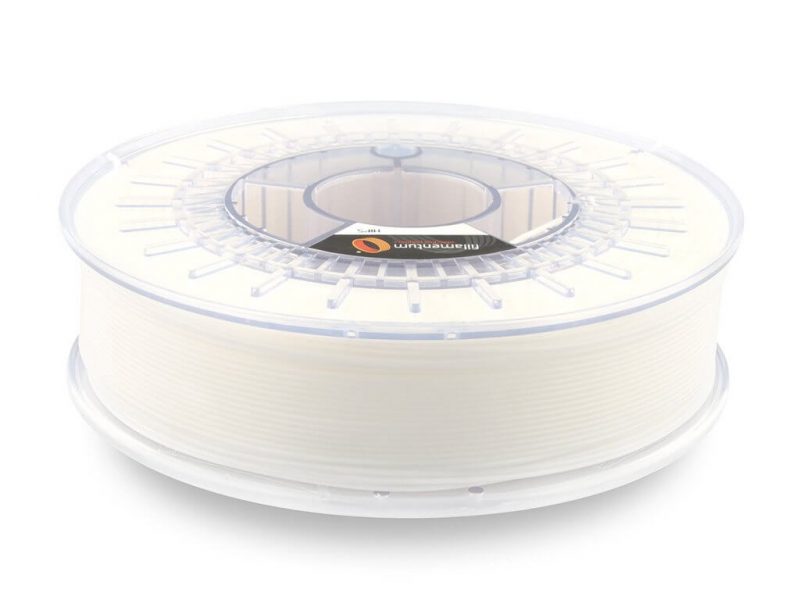 Amongst other high-quality 3D printing materials, the Czech-based manufacturer Fillamentum also offers HIPS filament in four colors: metallic grey, traffic black, sky blue, and signal red. All of which come in spools of 750 grams and two sizes, 1.75 mm or 2.85 mm.

Apart from the filament, Fillamentum also offers a dissolving solution, called Lemonesol in 315 ml and 625 ml bottles. The solution takes around 2 hours to completely dissolve the HIPS as per the claims on their website.

Originally, a startup project, currently a fast-growing innovative company, Fillamentum claims to be number one in the production of high-tech 3D printing filaments.

It distributes its products in more than 62 countries and therefore was also awarded The Best Global Exporter in Export prize DHL Unicredit in 2018.

However, they are not only into 3D printing filaments, they have their own R&D department, which is a part of Plastic cluster proudly cooperated with universities and well-known chemical companies. 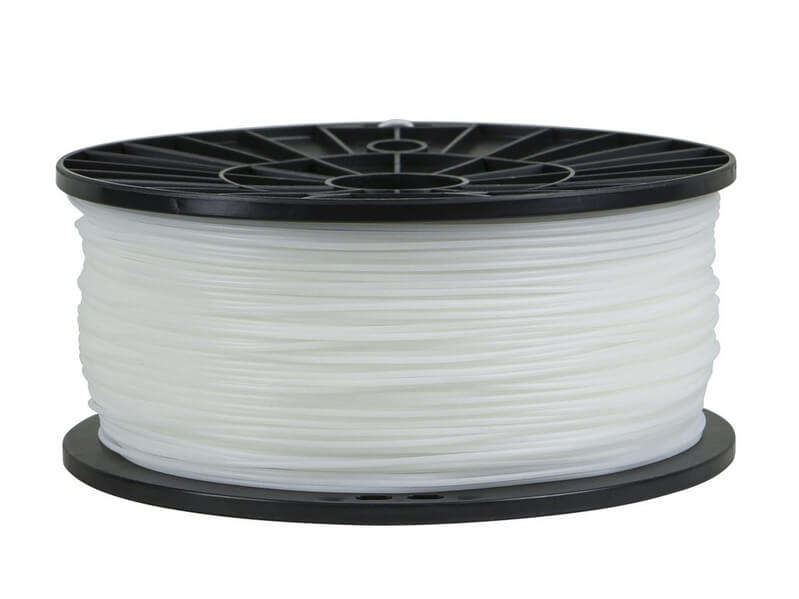 Monoprice has earned its name as a very popular manufacturer of 3D printers. It also offers its own version of HIPS filament that’s available only in white and comes in a 1-kilogram spool of 1.75 mm.

Established as a company in 2002, Monoprice has managed to build a stellar reputation for product excellence and customer service.

They offer over 7,000 high-quality, affordable electronics and accessories to professionals and consumers worldwide.

Monoprice operates on their proven business model eliminating the entire layers of markup within the supply chain. This quality allows them to sell premium products at a fraction of marketplace prices with incomparable speed and service. 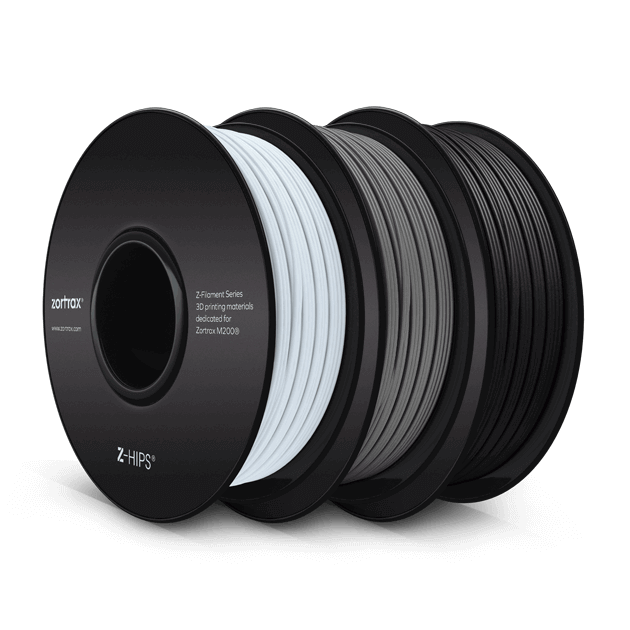 Another leading manufacturers of high-end 3D printers, Zortrax has made up to our list for HIPS filament. That’s right! Zortrax too, like Monoprice, is in the business for high-quality filament.

Z-HIPS, their brand of HIPS filament is claimed to best for 3D printing large models. The filament’s durability makes it perfect for prototyping machines as well as functional testing.

Compared to the standard High Impact Polystyrene, Z-HIPS is claimed to be modified for providing your 3D prints with a unique semi-mat finish. The material’s surface quality is excellent with surfaces of mass-produced items.

With this filament, you can quickly prototype casings and industrial parts requiring almost no post-processing.

This low-shrinkage material allows you to efficiently run reliable performance tests on models so as to closely resemble final products.

As in other websites, there are no recommended print settings for Z-HIPS filament available on their website. Zortrax is a Polish developer of comprehensive 3D printing solutions and has a strong position in the global market of desktop 3D printers.

It also offers dedicated filaments, their Z-SUITE software and additional devices are well-known in the market to improve the printing process and post-processing.

They offer their products through a network of over 130 partners operating in approximately 90 countries around the world on six continents. The list includes the largest markets in Europe, the Americas, Asia, Africa, and Australia. 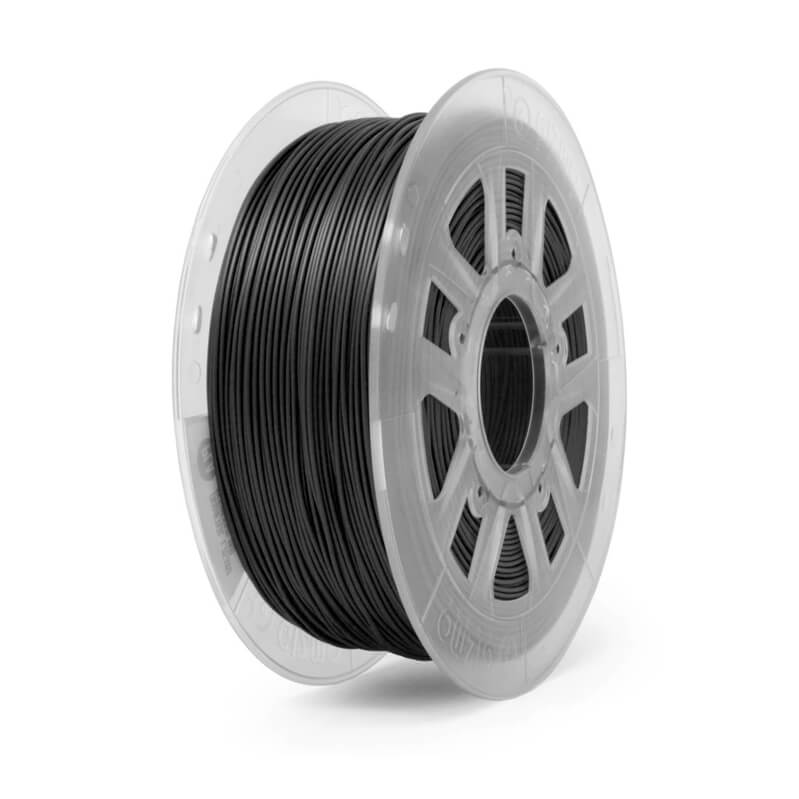 The company offers several shades of HIPS filament to let you freely use it as a primary material in your prints. In fact, if you notice from the list, Gizmo Dorks offers the most colors i.e. Blue, Red, Yellow, Black, Gray, and several others.

Because of this, you get a decent range of basic colors to play with in case you want to use HIPS for more than just support material. Gizmo Dorks is the only company to offer HIPS filament at a diameter of 2.85mm.

This is again somewhat eccentric for HIPS brands, as the current most popular diameter for filaments is 1.75mm.

Of course, not if you are printing with ABS or other more common materials. 2.85mm filament diameter is known to give you a better layer height and stronger layer bonding properties.

This is the reason; it makes complete sense to buy HIPS at such a diameter so that you can extrude both materials at the same printer settings.

Gizmo Dorks is a company that also has fantastic customer service and will replace any defective spools without asking you any questions.

Their support lines are very responsive and you can expect to talk to a representative from the company as soon as you call their number. The company is based out in California. 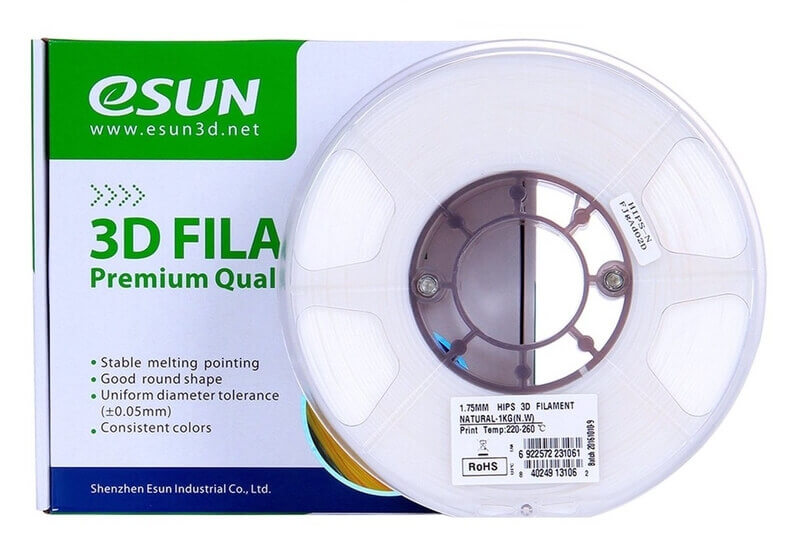 Although eSUN offers several colors of HIPS, white and black are the most popular colors especially when HIPS filament is meant to be used for making support materials.

Like most other eSUN filaments, their HIPS also come with a guarantee of no-frills and get the job done. Rarely to the point of negligible do you get to hear any troubles from their consumers!

Even though it is simple, eSUN HIPS is definitely high quality and one of the best HIPS filament brands around.

And while it is mostly used as a support material for ABS 3d printing, you can use it for building parts and functional prototypes of small build volume.

Another good thing about eSUN HIPS is its price. This HIPS filament is available at a priced well which is very affordable, unlike other HIPS brands.

Founded in 2002, eSUN is the short name of the Shenzhen eSUN Industrial Co., Ltd. a national high-tech enterprise based in China. The company also boasts itself to be one of the top ten biodegradable enterprises.

The company is committed to the research and development, production, and sales of 3D printing materials.

How To Store HIPS Filament?

You would know that generally, filaments should be stored dry and protected from light. You are advised to leave them in their original packaging until they are used for the first time.

Afterward, you can store them strictly in plastic boxes with a lid and plastic bags which should also be closed.

To ensure that the does not draw any moisture from the atmosphere; you can add a few packets of silicate to each plastic bag.

This absorbs the moisture, but above this, you should also be particularly careful when using solvents such as limonene or acetone.

Not only the filament but also the dissolving materials should be stored separately and safely. The arrangement for storing that solution should preferably be in a lockable cupboard or on a shelf at the top of the wall. Both of which should not be easily accessible.

The last one is especially applicable if you have smaller children in your household. Also, it is advisable to educate the children not only about the dangers of the solvents but also of the filaments themselves.

Overall, HIPS should be chosen according to the 3D printer that you possess. We’ve mentioned the printer settings which you can match up to your 3D printer’s nozzle and bed temperature ranges that they can withstand.

Also, the application for which you are going to use HIPS matters the most. If it is for overhangs and support structures, some brands are more preferred than others.

Whereas, if you wish to create small parts for making food-safe materials, you must consider other material choices other than HIPS filament.

One thing is accepted fact that 3D printed parts would not need any further post-processing. And, this is something very advantageous to your prints. It decreases a lot of time that otherwise gets utilized for the finishing of already 3D printed parts.