Offering a controllable heated print chamber of up to 65 degrees Celsius, Tractus 3D T850 P is capable of processing advanced plastics like carbon ...
Add to wishlistAdded to wishlistRemoved from wishlist 1
Add to compare
Check Price
Tractus3D

Tractus 3D claims how T850P is the best high-temperature 3D printer they have to offer in their PRO series! 114 cm high, T850 P manages to fit into your desk.

What is so unique about this desktop 3D printer that makes it print-ready even for rare materials like PEEK and ULTEM? This is a question that we will expose you to, in this in-depth 3D printer review.

We will start our journey with features that separate T850 P from other 3D printers in the same price range.

Heated Chamber: The temperature inside T850 P can be controlled easily using this innovative heated chamber which is fitted inside the printer. This will allow you to print using various 3D printer filaments. The thermal management done inside the printer will help reduce warping on parts and functional prototypes as it diminishes premature cooling by open air. This chamber allows you to set the temperature at the required level up to 65 degrees Celsius.

Huge Build Volume: The maximum build area offered by Tractus T850 P is 280 mm * 400 mm (diameter * height). This makes the printer extremely useful for prototyping and small-batch production. Instead of manufacturing a single part or functional prototype in different parts and then assembling them, you can manufacture it in one go. This increases production time which is extremely useful.

Can withstand temperature up to 450 degrees Celsius: The printer’s high-temperature nozzle can go up to 450 degrees Celsius, whereas the build plate can go up to 175 degrees Celsius! Tractus 3D T850 P lets you create parts and functional prototypes with superior 3D printer filaments such as Carbon PEEK, PEEKQ, and ULTEM. It is rare to find a printer in the same price range to offer such high build volume and also allow you to print with such rare 3D printing materials. At the same time, conventional 3D printing materials like PLA and PETG are also a part of the long list of materials that the printer allows you to 3D print. 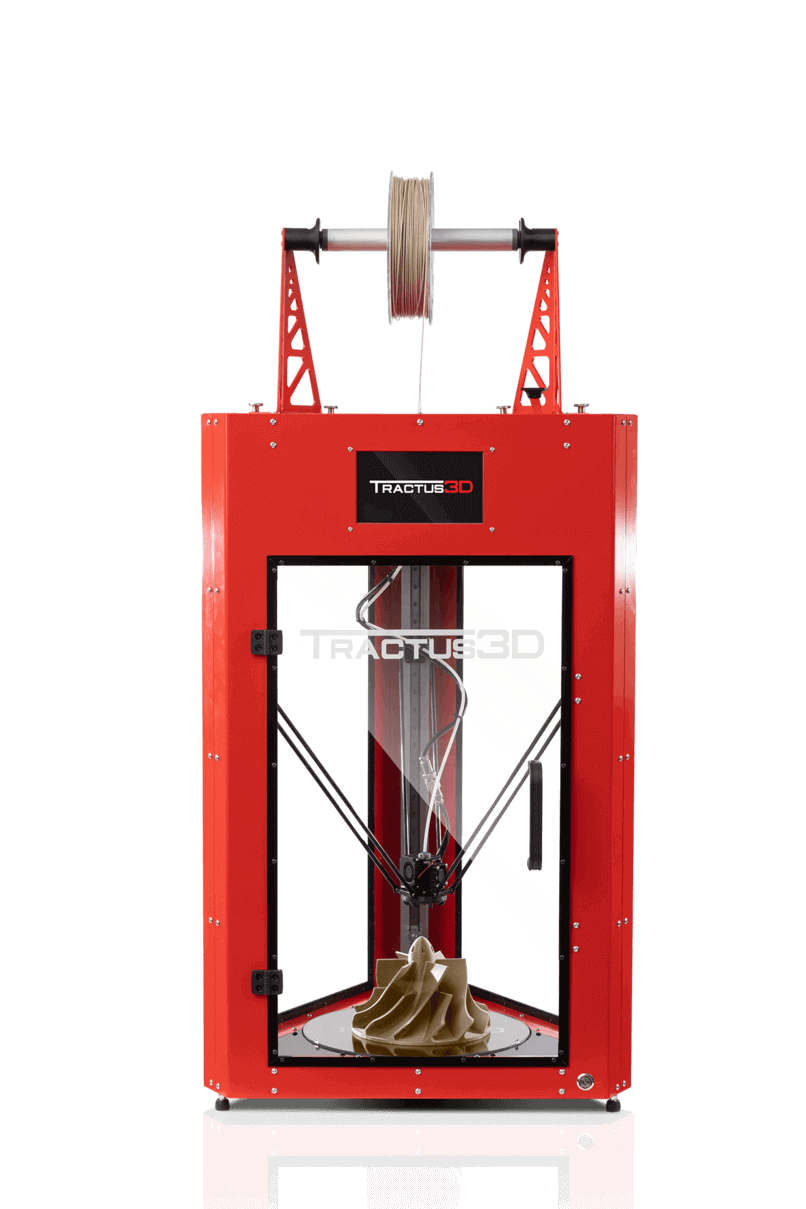 It can print with a print speed of 450 millimeters per second. Every part or functional prototype that’s built on this 3D printer has an X, Y, and Z resolution of 10, 10, and 10 microns respectively.

The layer resolution ranges offered by various 3D printer nozzle that can print a part or functional prototypes on this printer is as follows.

The operating sound produced by Tractus 3D T850 P is somewhere around 80 decibels. This printer consumes 3100 Watts of power. It can be connected to using a Local Area Network.

There is a seven inches long color touch screen interface on the body of this printer that lets you manage as well as control this 3D printer.

The build plate is made up of heated glass and stays in between the temperature range of ten to hundred and seventy-five degrees Celsius.

For knowing the exact price at which this 3D printer will be made available to you, you need to Get a Quote online.

There is a form that you will have to fill which asks for your and your company’s details.

Once you fill this form, the company will contact you on your email and let you know the price accordingly. 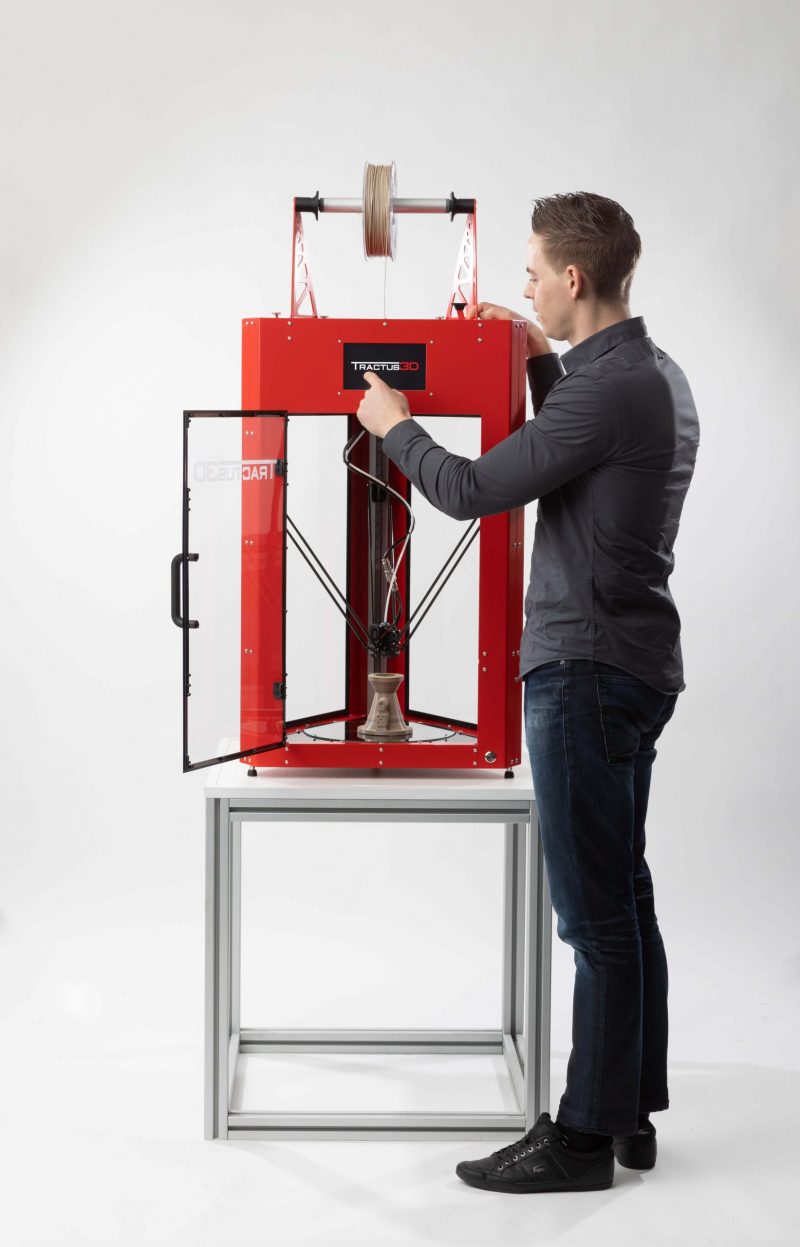 Tractus 3D T850 P has a unique design compared to the 3D printers that offer a bigger build volume than what it has to offer.

Although the overall shape of this 3D printer remains rectangle, the difference in the placement of the filament spool holder.

You may even find spool holders open, without any covering on the majority of desktop 3D printers. But this one has a cover over them as well.

Tractus is a company that is only to making of 3D printers that have a Delta-style construction. So, when you look inside the print chamber, you find three pillars connected with each other, forming a triangle.

These three pillars provide the necessary support and movement to the nozzle system of this printer to move up and down.

There are rails installed in these three pillars, which allow the nozzle system to do so.

The printer comes completely assembled. All you have to do is unwrap it from the box in which it is shipped at your place.

Read the manual with which it arrives to know about the functionality of each and every part that the printer is made up of.

Try getting familiar with the touch screen interface. Auto level the bed of Tractus 3D T850 P before starting to print your first part or functional prototype on this 3D printer!

Load the filament spool holder with any of the 3D printing materials you wish to 3D print. Slice the 3D design file in Simplify 3D slicing software and that’s all, you are good to go.

FDM/FFF 3D printing technology is the most commonly employed one that you will encounter on most 3D printers.

After the first layer is laid down on the print bed, the nozzle system moves one layer above it and prints the other layer.

The printing cost per part on Tractus 3D T850 P depends on various factors starting with the 3D printing material that you are using. 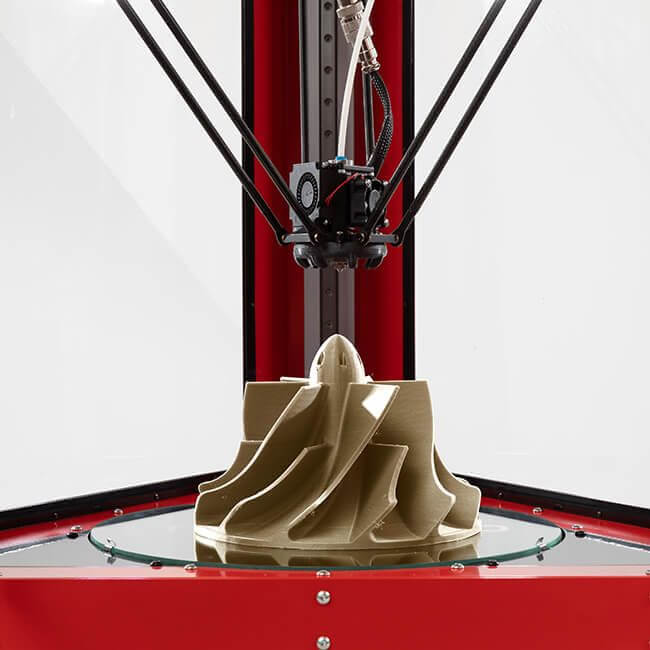 As mentioned in the specifications section of this article, there is a huge layer resolution range that you can print your part or functional prototype in; using this 3D printer.

You need to classify the range of resolution range, based on which you need to take the filament diameter. There are 0.4 mm, 0.6 mm, 0.8 mm, and 1 mm.

Overall the layer resolution range offered by Tractus 3D T850 P is from 10 microns to 800 microns.

The printer as well as the parts and functional prototypes have such a quality that they have found an application in Healthcare, Manufacturing, Education, and Automotive industries.

The printer comes with Simplify3D’s one license that can be used on two computers. This software supports all the operating systems be it Mac, Windows, and Linux.

It supports file formats such as STL, OBJ, 3MF, JPG, and PNG. The printable formats offered by this software are G and GCODES.

A warranty of twelve months is offered by the company on every hardware part that is fit to make this 3D printer.

In terms of technical support, you get full cooperation from the Tractus support team or certified service partners or resellers.

Free cleaning of print heads, discount on filaments, and fifty percent discount on any new upgrades are some of the benefits you get for buying this 3D printer.

Before concluding this article, we’d want to bring your attention to some of the most important criteria while buying a 3D printer.

This would want to do by summarizing the complete article in terms of the cost, quality, print speed, and capability, practicality, and user expectations offered by this 3D printer.

3D Printer Cost:  As mentioned in the Price section of this article, you will need to fill a form that’s available online to get a quote for this 3D printer. $14500 is the price of Tractus 3D T850 P that’s mentioned on a website that provides reliable information about 3D printers.

3D Printer Quality: By printing with various filament diameters, you will be able to get different kinds of layer resolutions on parts and functional prototypes. Overall the print quality of this printer is excellent.

3D Print Speed: This is an area in which Tractus 3D T850 P steals the show. With Delta construction, it possible for you to create a part or functional prototype in much lesser time than creating the same in a printer that has Cartesian construction. Because of this quality, the part or functional prototype that takes more time to be printed on other 3D printers will be created in lesser time using Tractus 3D T850 P.

3D Printer Capability: In terms of 3D printer filaments with which you can 3D print on Tractus 3D T850 P, there are many options. So the printer is capable to offer you enough to play with.

3D Printer Practicality: The printer makes lesser noise than typical desktop 3D printers. It is also stable and does not vibrate even while printing a part or functional prototype with maximum build volume.

3D Printer User Expectations: The printer caters to a larger amount of audience. It is primarily intended for small business owners and professional 3D designers. But when used by first-time 3D printer users, it does not fail to satisfy their expectations as well.

Its heated build plate and Delta construction are two major factors that allow you to print with a good amount of speed.

So your quality, but not at the cost of speed! Which is rare in 3D printers of this price range to have.