2021 MatterControl (CAD): All You Need To Know to Get Started

Unlike other software, MatterControl does not have an exclusive website.

It can be downloaded from Matterhackers website that allows you to shop for 3D printers, 3D printer filament, 3D printer accessories, clearance items, CNC and 3D Carving, software and add-ons, digital designs, 3D printer resins, and education and curriculum apart from this particular slicing software.

The first fascinating thing to note is that the company keeps updating its software to include more printers in the list of compatible matches.

The second thing to know is, like TinkerCAD, this one too is available for free, it’s open-source.

While you might all know what slicing software is all about, there are chances that a few users wish to find out more.

For beginners, the process of 3D printing begins by designing a 3D CAD model. Once that is done, the model is exported to a slicer where it is prepared for 3D printing.

In case you have more than one 3D printer, the 3D management tool will permit you to not only monitor, but also control each of the print jobs on the printers remotely.

So, for the software you see, how important it is to keep an integrated view and offer that view to its users?

This sort of integration is something California based Matterhacker’s software Matter Control is an expert in doing.

It lets its users control everything from a single software. Be it slicing or 3D printer management, you can do all of that from a single platform.

The first version of this “every operation from a single platform” was released in 2016. And as mentioned above this is the second version of that software and hence more promising.

You will be able to design parts from scratch and even browse existing projects via the Design applications.

Apart from that, handling the slicing process with grace and offering full sway over support generation, as well as bed leveling and other advanced settings are something that the software can do with ease.

Additionally, you can print the model, monitor the print job right away from the MatterControl platform, so you do not require multiple programs.

Now that you have had enough introduction about this software let’s see specifically about MatterControl 2.0.

What Does MatterControl 2.0 Offer that its Previous Version Did Not?

The newer design tools kept inside the software provide you with a complete set of modeling primitives that can be used for creating 3D printable designs.

Apart from offering users a set of tools with which they can build complex shapes, MatterControl 2.0 happens to be software for all.

It is as useful for professionals in the field of 3D printing, as much as for beginners.

We felt it is important to cover this part of our writing specifically while MatterControl review to write about MatterControl Desing Apps.

The software has the tools that will enable designing and creating your own models and 3D prints.

The new version has an array of new tools called “Design Tools” with which you can now combine and subtract different parts together for creating something brand new and your own.

But if you do not want to undergo this complete procedure, you also have several parameters that you can change to make it fit exactly what you need.

In its current version, Design Apps are models that the company creates and publishes.

The goal of this creation and publishing is to allow anyone to publish and share their own version of the app.

The intent company claims, is to make you understand that just like how you can modify the primitive shapes, there are similar parameters for the app.

Similarly, the other application that you have currently on Mattercontrol is a business cardholder.

In this application, you can input what you want in the specified fields and it automatically updates to fit the text within the allowed space.

A version of this application will allow you to change the font and the text of the words on it, another version will update to an image that you can import yourself, and there’s even another version that has both an image and text that you can modify, all while maintaining that everything remains within the boundaries of the business card holder’s face.

This is the section you would probably want to jump on while reading the MatterControl review if you were a designer.

MatterControl has gone through some major changes to deliver to its customers the first of its kind design, prepare, and print software for any Maker.

Herein, the makers have, from a facelift to improved slicing operations, the experience of using MatterControl is grown with even more robust features in this version.

In the sidebar of the software, the biggest difference between the prior version and the current one is the full array of modeling “primitives.”

After researching we found out that primitives are the term used for the basic shapes that can be used to create more complex and creative models.

In this version, all primitives can be modified in the basic width, depth, and height, but some of them have more advanced options.

To name a few that have advanced options, there is a cone that can have its diameter, height, and sides modified, but sides will round down to the nearest whole number.

Then you have a cylinder that can have a different top diameter or be cut up like a pie chart with different start and end angles.

Lastly, you have a ring that can have the inner diameter and outer diameter changed to make thicker or thinner rings.

These features allow you to better place your parts around each other for things like plate optimization, support structures, and simplifying prints by ensuring the flattest surface is on the bottom.

The first major tool is Align which you can use, but at least two models need to be selected to make it work.

Using Align you can treat models the same way you would use justification in word processors. Align can be used for making sure your two or more parts are perfectly aligned along X, Y, or Z or even use the advanced options to make two parts offset from aligned.

The next tool is Lay flat that simply drops the part to the surface Z0 plane and with a slightly rounded object will do its best to find the flattest face that’s already oriented toward Z0.

Make support is a tool that is really cool. Using Make support you can turn any model into support material.

So, you can drag a cube into a hole in the side of a model and have only that supported, instead of turning auto-supports on and be limited to build plate only supports.

The array section is where you’ll have to look. Depending on whether you want your parts in evenly spaced rows, a circular pattern, or a mix of the two, the tools that you will need are.

This is something that you also will need if you are a designer and the fact that it is mentioned in this MatterControl review makes it so much easier for you.

Using this you will be able to modify and create new objects, shapes, and models.

The first option which you have here allows you to combine two selected parts that are overlapping each other and merge them into one printable part.

You can also drop a sphere on top of a cone and create an ice cream cone that’s one complete model.

Similar to combine, you have the option to subtract with which you can take two selected parts that are overlapping and ask which one should be subtracted from the other.

You can also turn that part transparent once you’ve selected it. Clicking on the update will put it in effect and cut out part of your model.

It feels amazing to write about this section in our MatterControl review because these tools are very important for you as a 3D designer.

Then there is something interesting which is called intersect in which you can take two selected parts that are overlapping and keep only the part that is shared in space between the two.

For example, you can drag a cube into half of a sphere, click intersect, and have yourself one hemisphere of the sphere left behind.

The last option is to subtract and replace, which will take two selected parts that are overlapping and ask which one should be subtracted from the other and rather than completely remove it, instead it cuts along that boundary.

Effectively using this tool you can create a dual extrusion model because the walls are perfectly flush with each other.

Also using subtract and replace you can cut out a logo from a cylinder, then move the part to have a perfect fit inlay. 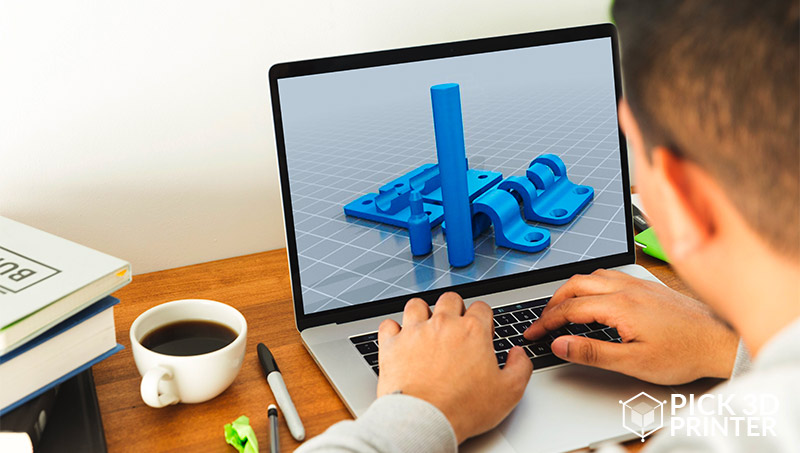 Our MatterControl review would be incomplete without mentioning this section.

At MatterHackers, the company claims to live and breathe 3D printing and for serving its customers which demands the best of MatterControl and its products, MatterControl constantly strives.

The company constantly challenges the status quo by innovating and updating MatterControl software – which is the first of its kind solution for 3D printing.

The company is constantly adding features to ensure the ultimate 3D printing experience.

This software features a real-time modification of Z-offset, speed and extrusion adjustments, and text notifications when your print completes.

There are also some amazing new features, which you also get the ultimate control with options for creating customized supports, fine-tune dual extrusion prints, brand-new built-in design tools, and design apps.

MatterControl software enables you to do more with your creativity, your time, and your 3D printer.

MatterControl(CAD) was featured in our articles:

In our article about MatterControl review, we’ve tried to cover up most of the parts about this software.

By reading this article, you can find out a lot of good things about this application that make it such a great aid for 3D designers.

MatterControl is a very progressive app. And, the app designers keep updating the tool to fit with current demands. Most importantly, the app is open source.

This means that anyone can offer suggestions for improving the performance of the application.

Hence, letting everyone to share their feedback and prepare software that can leave every other alternative behind.

Just remember, if you are working with this slicing app, you would certainly be intrigued to prepare better models, looking at its various advanced setting options.