The printer is based on FDM 3D printing technology in which printing happens layer by layer, with the help of the filament.

Enabling you to print with any nozzle size ranging from 1mm to 10mm Potterbot 9 Pro offers plenty of variants for creating vivid structures on parts. ...
Add to wishlistAdded to wishlistRemoved from wishlist 0
Add to compare
Check Price
3DPotter

Potterbot is one of those websites which offers the service of purchasing the 3D printers that they’ve manufactured from their websites itself.

Meaning you don’t need to go on Amazon or other websites whether they offer these printers or not.

But of course, with this, there is also a pre-requisite that you need to know there is a company named Potterbot which manufactures ceramic-based 3D printers.

And to know some specific detail about any company, not just PotterBot would be like searching for a pin in a dry grass field.

But anyway, with the articles that we write and so do so many other companies, we hope that these kinds of companies get more and more exposure so that the buyer meets the seller directly and needs to pay not much extra.

3D Potter or Potterbot operates from Florida, USA, and to date offers the following products: 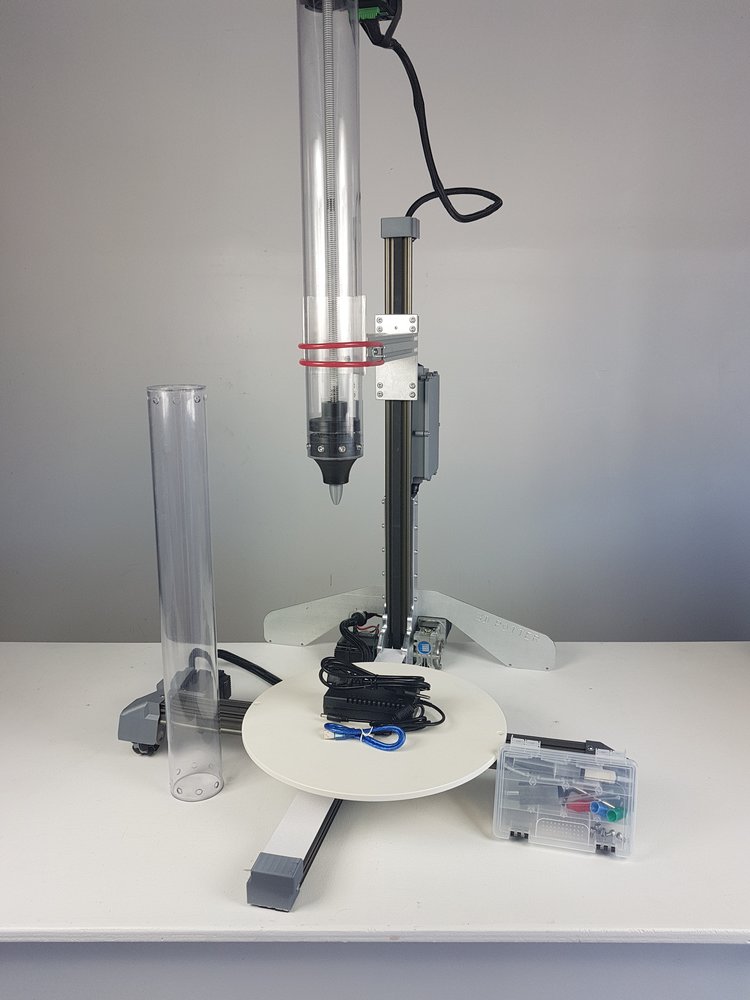 In Printer specifically, the company offers nine different printers, all of which have an open design. The lowest-priced is the Potterbot Micro 9, whereas the highest-priced is the Scara H.D. (Heavy-duty).

The lowest on this website means $2850 and the highest mean of $57500. Something that is really nice about the manufacturer is the comparison chart of all the 3D printers under the Printers tab.

So, if you wish to compare and know what the price difference is for, you can know that easily. In this article, as you’ve already read the title, we are going to talk about 3D Potterbot 9 Pro.

This 3D printer is basically a version upgrade of the Potterbot 9 Pro. The company says that the overall features of this printer are similar to that of Potterbot 9, the difference being, this one utilizes a larger hybrid closed loop stepper motor on the clay extruder and on the Z-axis.

What this basically means is? Better strength and accuracy in the printed parts or functional prototypes.

The differences between Stepper Motor and standard motor can be explained considering factors like the nature of the loop of operation of the motor, controlling, the presence of brushes, its motion, and displacement.

Additionally, factors like the response time of the motor and the effect of overloading all need to be considered.

Differences between the stepper motor and standard motor:

Stepper motors are easy to control with the help of microprocessors and other controlling devices, whereas the control of DC motor is not easy.

The Stepper motor is a brushless Motor, the standard motor contains brushes which cause problems such as wear and tear and sparks.

The motion of a stepper motor is incremental, while the resolution is limited to the size of the step.

A standard motor has a continuous displacement and can be controlled accurately and positioned exactly, the feedback control mechanism with a standard motor gives a much faster response time as compared to that of the stepper motor.

Lastly, the stepper motor can be slipped and gets out of control if overloaded and the error cannot be detected easily, whereas in standard motor the relays and overload protecting devices come into at the time of overloading and protect the motor from any damage.

This feature is something that the company also offers in Potterbot 9 which is the former version of this 3D printer.

And if you have difficulty to imagine all the functions of the parts mentioned in the feature, don’t worry.

You know rails by the world railway and what railway does is, it’s a mode of transportation and rails enable train to travel on it and transport one thing from one place to the other.

So, does rails in a 3D printer do! They transport one object from a certain place to the place where it is required.

So, if you have a raw material that is initially stored at a place, but its place of requirement is different, with the help of these rails you will be able to transport it to the place where it’s required at that instant.

So, an important characteristic that these rails should inhibit is, they should be able to withstand heavy loads.

And that’s exactly why they are made of aluminum in this case. Not only are they robust, but also do they have a smooth surface.

The company claims this is beneficial especially if you are planning to use this in a classroom or an industry.

When you have a fixed cross-sectional profile of your product, your product can generally be created by the process of extrusion.

Here in 3D printing, no matter how different your product is, it is created layer by layer using the process of extrusion.

Direct extrusion is often referred to as processes in which the raw materials are directly used i.e. no other material is used as an intermediate in the making process.

The company claims that other brands use compressed air system printing slips which is not a direct extrusion procedure. That is the reason for the high quality of products which are 3D printed by the company.

And this modernized system lets the user operate the printer wirelessly. You as a user can fully control this 3D printer with your workplace’s Wi-Fi connection.

In fact, you can even upload and control multiple files from the devices that you are using to the printer.

In case you are owning a business and have more than one 3D printer of this company a benefit that the company offers over other companies is, in the nozzle system.

The company gives you the freedom to operate nozzles interchangeably i.e. from one printer to the other.

The specifications of this printer are also the same as Potterbot 9. The build volume offered by Potterbot 9 is 420 mm * 360 mm * 480 mm. The weight of the Potterbot 9 printer is 47 kilograms whereas its height and length are 78 and 35 inches respectively.

The print bed has a diameter of 381 mm, whereas the height to the top of the extruder which is fully extended is 1981 mm. The average speed of this printer ranges from 55 to 130 mm per second.

The price of this 3D printer on ClayKing is $5650 which is $100 more than the one that is mentioned on their website.

There are the same four photographs that you have on the webpage of Potterbot 9, in Potterbot 9 Pro as well.

From one of the photographs that are visible on the website, you get to know that the printer is not enclosed. It’s open.

You get to see two stands joined with each other at the base making an “X.” Connected to one of those stands is a vertical stand that is extending its hand and holding the nozzle.

Connected to the top of the nozzle is a wire from the vertical stand. Both the base stands have wheels that have circular legs.

The other three photographs actually have different pictures starting from the small box that has all the parts of the printer, the way it is boxed, the way one or two parts of it are set up, and the other one in which more parts are fixed.

So, it essentially means that the printer does not come assembled, and it will take some of your time to assemble it.

All these photographs show how to set the printer up. One by one, if you see all the photographs in the correct order, you can know how it means to be untangled from the box and even assembled.

The printer doesn’t come fully assembled. There are six things that this printer comes with. All of them need to be assembled. These things are also displayed on the company’s website.

The printer is based on FDM 3D printing technology in which printing happens layer by layer, with the help of the filament.

The company, however, makes printers that are specifically designed for ceramic materials, that can hence, develop parts and functional prototypes based on these raw materials. 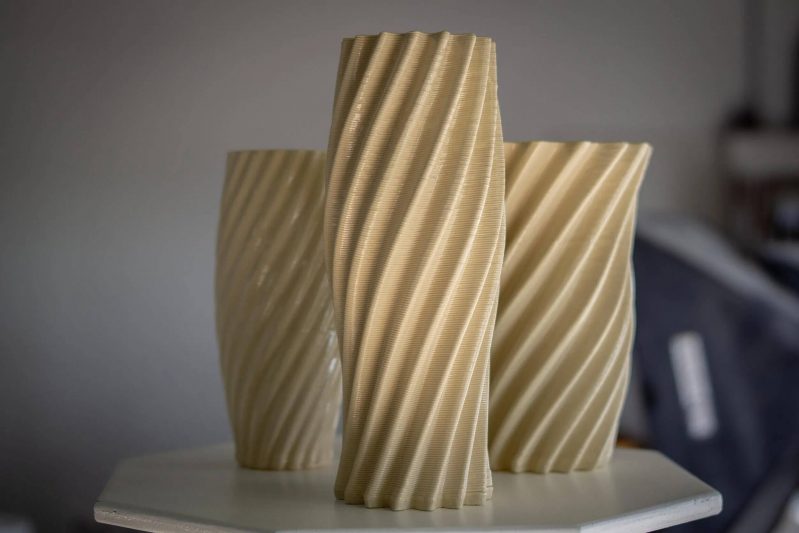 The overall print quality of this 3D printer is more than that of its former printer because of the one modification on the Z-axis as well as the extruder.

What this also does is, it lets you step up freely on the height side of your parts and functional prototypes, something that was really limited to the X and Y-axis.

Again, there are photographs of parts and functional prototypes that were made by the company’s printer which you can see on the website.

You have three options for software, all of them are visible after clicking on the Software option that is given on the website under the info tab.

The company has a contact form page that you have under the Contact tab apart from the products and info tab.

There are also specific email id’s which are given for the tech support, which can be contacted.

The other contact can be made via telephone and then Skype if you wish.

In this section, we are going to talk about Cost, Quality, Speed, Capability, Practicality, and User Expectations.

3D Printer Cost: As mentioned above, overall, the printer is a little expensive than its competitors.

3D Printer Capability: You can print with multiple ceramics.

3D Printer Practicality: Things that you always created using pottery can be created with even more accuracy using this 3D printer.

3D Printer User Expectations: Businesses running on pottery are going to benefit. As well as from what is mentioned on the website is, the printer’s former version can be used at universities and institutions.

Whenever there is a company which manufactures anything that is as specific as a ceramic 3D printer that Potterbot does, it is bound to be expensive, because of the simple fact that it can serve specific products with a higher amount of quality than general products do.

So, if you are looking for full-time research in ceramic parts and functional prototypes, Potterbot printers should be your go-to.