Easily able to directly extrude real clay, as opposed to the compressed air system of other 3D printers, Potterbot 9 is a standard 3D ceramic ...
Add to wishlistAdded to wishlistRemoved from wishlist 0
Add to compare
Check Price
3DPotter

They are,” the only dedicated 3D ceramic printer using real clay!” is the fact that you get to know after you land on the 3D PotterBot 9 printer’s website.

You will want to see the slides that are present just beneath this claim mentioned on their website. There are sixteen photographs of structures, parts, or functional prototypes whatever you want to call them.

Since the company has made such a huge claim above, you want to guess that they are all made up of using the company’s ceramic printers.

However, there is not text to let you know, which one is made by which of the company’s ceramic printer. 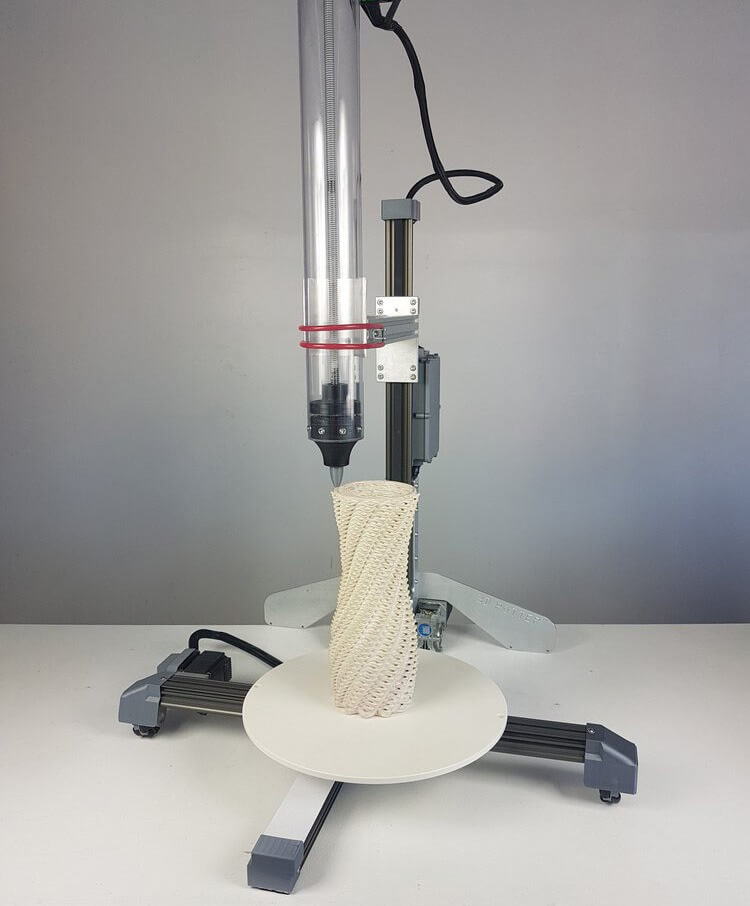 Beneath which comes another claim made by the company i.e. their line-up of Clay printers have some of the most unique features in the world compared to any other printers.

But which ones are those features? Is something you don’t get to see a mention on the website till now!

In an explanation that continues after the claiming sentence ends, the company says that they use a cardinal system rather than a delta printer configuration that allows precise control with minimal effort.

Frankly, the sentence is too difficult to understand for a person who does not have a core 3D printing background. Speaking about the 3D printers that this company offers, you have nine in total.

In this article, we are going to be talking about the second one on their list i.e. when you click on the products tab, printer options of the website. 3D Potter Bot 9 which is available at $4850.

You have a photograph of all the 3D printers when, after navigating on the website, you reach the list of printers.

For 3D PotterBot 9, the claim that you have given by the company shows its specific use or the primary audience to which the company has targeted this 3D printer.

“Most popular real clay 3D ceramic printer used by universities and institutes for its ideal size and price range,” is the claim. So, universities and other institutes, here is a little hello from this claim and printer making company,” Hey!”

In the paragraph next, the company changes its claim a little bit and replaces institutes with individual artists who want to print objects that are 19 inches tall.

Woah! If it looked to you that you would never be able to understand what this feature means.

Take a deep breath in and exhale because we have done the groundwork for you and tried to make it as simple as it can be for anyone to understand what this feature is trying to tell you.

First of all, let’s get to the latter part of the claim which is the basic thing to understand.

So, the feature says, it uses standard stepper motors on the extruder and Z-axis. Most of you know what a motor is. So, we will tell you how a stepper motor is different from a motor.

What a stepper motor does is, every time it completes one closed loop, it opens up a little bit. So, overall, mechanically, a stepper motor lets you cover more area with the lever attached to it than a standard motor.

Talking about the hybrid stepper motors. We all know by the frequent usage of the word hybrid that wherever it comes into usage, it indicates some sort of a combination.

Here too we have a combination of variable reluctance and permanent magnet motors that build up a single hybrid stepper motors.

So, you have the length and the breadth of an object that you are 3D printing done by hybrid steppers, wherein you have the height of that object printed with the help of standard steppers in 3D Potterbot 9.

Again if you have difficulty imagining all the functions of the parts mentioned in the feature, don’t worry.

You know rails by the world railway and what railway does is, it’s a mode of transportation and rails enable train to travel on it and transport one thing from one place to the other.

So, does rails in a 3D printer do! They transport one object from a certain place to the place where it is required.

So, if you have a raw material that is initially stored at a place, but its place of requirement is different, with the help of these rails you will be able to transport it to the place where it’s required at that instant.

So, an important characteristic that these rails should inhibit is, they should be able to withstand heavy loads. And that’s exactly why they are made of aluminum in this case.

Not only are they robust, but also do they have a smooth surface. The company claims this is beneficial especially if you are planning to use this in a classroom or an industry.

When you have a fixed cross-sectional profile of your product, your product can generally be created by the process of extrusion.

Here in 3D printing, no matter how different your product is, it is created layer by layer using the process of extrusion.

Direct extrusion is often referred to as processes in which the raw materials are directly used i.e. no other material is used as an intermediate in the making process.

The company claims that other brands use compressed air system printing slip which is not a direct extrusion procedure. That is the reason for the high quality of products which are 3D printed by the company.

Because it’s the ninth version of the printer that the company has been producing for years, so, the company claims to have improved its systems and made a little modern.

And this modernized system lets the user operate the printer wirelessly. You as a user can fully control this 3D printer with your workplace’s Wi-Fi connection.

In fact, you can even upload and control multiple files from the devices that you are using to the printer.

In case you are owning a business and have more than one 3D printer of this company a benefit that the company offers over other companies is, in the nozzle system.

The company gives you the freedom to operate nozzles interchangeably i.e. from one printer to the other. 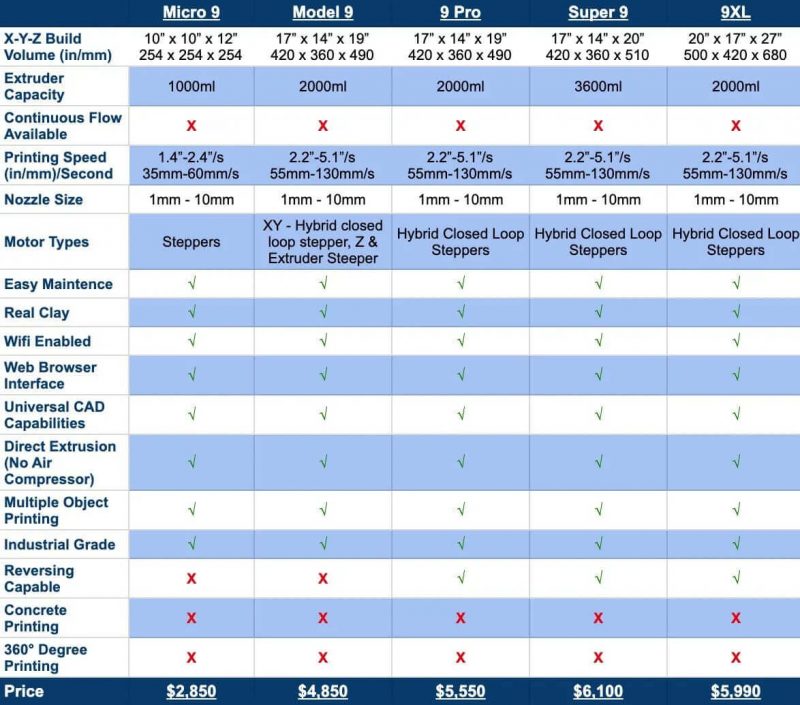 The print bed has a diameter of 381 mm, whereas the height to the top of the extruder which is fully extended is 1981 mm.

The average speed of this printer ranges from 55 to 130 mm per second.

As mentioned in the introduction of the article the price mentioned on the website of the manufacturer of this printer is $4850. If you buy it from Clayking it will cost you $100 more.

From one of the photographs that are visible on the website, you get to know that the printer is not enclosed. It’s open.

You get to see two stands joined with each other at the base making an “X.” Connected to one of those stands is a vertical stand that is extending its hand and holding the nozzle.

Connected to the top of the nozzle is a wire from the vertical stand. Both the base stands have wheels that have circular legs.

The other three photographs actually have different pictures starting from the small box that has all the parts of the printer, the way it is boxed, the way one or two parts of it are set up, and the other one in which more parts are fixed.

So, it essentially means that the printer does not come assembled, and it will take some of your time to assemble it.

If you start viewing those four pictures in the reverse order, you will get exactly how to set up this printer. In the first photo, you have the complete device’s part in a box. Other things that are included in the box are:

You can fully control this printer through a web interface. You require no applications or software installation while using this 3D printer. There are also non-wi-fi versions that are available, for which you need to contact the service provider.

The 3D printer uses FDM 3D printing, specifically for ceramic material. So, the building of an object happens at one level after the other.

The overall printing cost of this printer is lesser than that of the SLS 3D printer, but then in turn you have the quality issue.

So, if you compare this material’s printing cost with the other FDM printer it is justified. 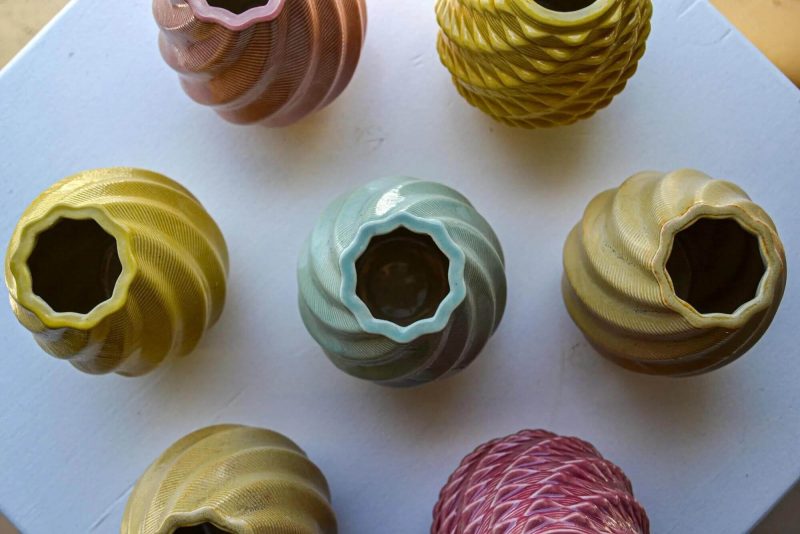 All the sixteen photographs that are taken and posted on the homepage of this website have excellent quality.

As you can know by the name of the manufacturer i.e. potter but, you can develop all the pots that you ever imagined to develop with pottery, can be developed with these 3D printers. 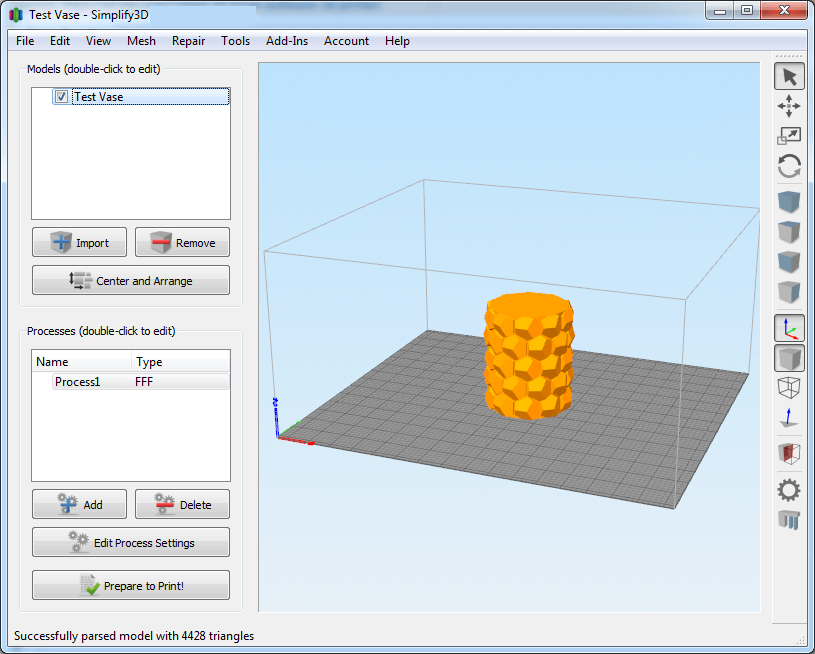 In the info tab of the company’s website, you have the option for Software. When you click on this option there are three options that the company throws at you.

There is a contact form page that you have apart from products and info, which you can fill and avail your facility accordingly.

There are also specific email id’s which are given for the tech support, which can be contacted. The other contact can be made via telephone and then Skype if you wish.

Points like Cost, Quality, Speed, Capability, Practicality, and User Expectations are explained in brief below.

3D Printer Practicality: Objects with less layer visibility can be printed with this printer.

3D Printer User Expectations: Showcase objects can be made with very high-quality.

As the company has marketed itself like a printer of universities and other institutions, it is the best buy for all those purposes.