The Additec μPrinter is the world’s most compact metal 3D printer. It is capable of depositing wire and powder feedstock into complex geometries, all while fitting onto a desktop.

The homepage of this printer’s manufacturer’s website contains seven tabs, none of them titled products.

You have Home, Process, Systems, About, Gallery, Contact, and Media.

You are greeted with three photographs titled which turn into text and titles.

Starting from the left the titles readout:

We were confused until we read the texts completely to find out how many exact numbers of printers the company has manufactured. And the answer to it seems one i.e. Additec uPrinter.

Because the text of the first picture reads out as an easy to integrate module than can turn any milling machine into an advanced hybrid manufacturing machine.

The text of the second picture from the left reads out everything about how their manufacturing process stands out from others.

Moving on to the third picture you get to know something about the printer that we are going to review in this article.

The company claims its printer to be the first “turn-key” laser metal deposition 3D printer. 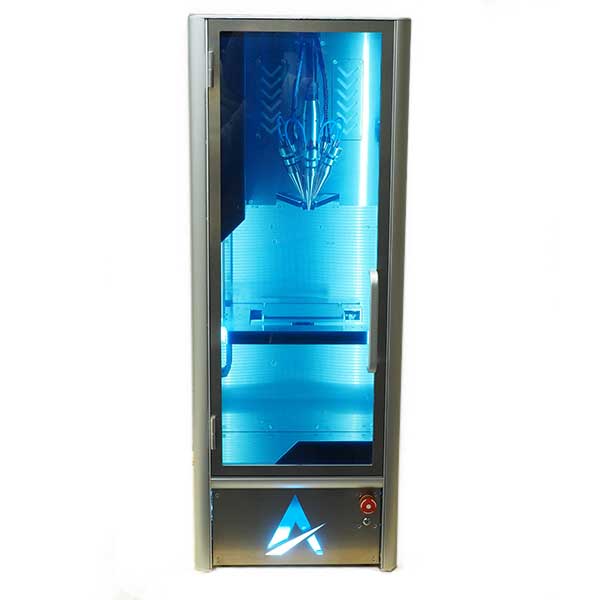 A lot of other things are mentioned which we will eventually mention in this review article when respective sections come.

Scrolling down, you get to see and hence read,” Sophisticated Low-Cost Laser Metal 3D Printing with Wire and Powder.”

Scrolling a little more down, you get to see the same pictures arranged, the only two differences being, the pictures do not turn into text when the mouse’s cursor is brought onto them, instead, there is text at bottom of the picture and the sequence is changed that earlier, the second picture is now the third one from the left and vice versa.

You scroll a little more down and the homepage of the website ends with the address of the company and their contact numbers.

There is text on the left and pictures of all ends of the printer on its right. Additec, according to the claims by the company is not only the world’s first “turnkey” printer but also the world’s most compact metal 3D printer.

One of the capabilities of this printer is to deposit wire as well as powder feedstock into complex geometries even while fitting at your desk.

Another rare feature of this printer is the ability to process commercial welding wire meaning that materials are widely available anywhere in the world starting below $10 per kg can be 3D printed.

It is easy to operate, has an integrated process, and is a very reliable machine.

It has low purchase as well as running costs and many other such claims are mentioned in that little paragraph you find besides the images.

But there is no basis to these claims as to know why is the company claiming such things.

It’s just information mentioned to you, it’s up to you if you wish to buy it go ahead if not, do not subscribe to it, completely your choice.

Three images on the right of this text show the printer on the desk, there is one close image of some pipe and arrangement and there are two more images of how pointed or dense the laser is while manufacturing parts or functional prototypes.

There is a use case research that can also read after shortening the claims paragraph, there is use case industry and pricing.

Scrolling down you get a video that is one minute fifty-five seconds long.

You can also view more samples as well as learn more about the process.

But right now, more specific features and their explanations.

If you have been on any other website of a 3D printer that is also based on Laser 3D printing technology you would surely get the quality of laser they are using as a feature of that 3D printer.

And if you are really willing to buy a printer, what you can do is, compare the laser qualities and determine which laser is the densest.

The more dense the laser would be, the more good quality of part will it be able to produce. How do we know it? Well, we just do!

It is only after reading the explanation given for 600 Watt Diode laser that we get to know why there were three different pen-like structure pointing in the two images which depicted something about the laser.

Additec uPrinter consists of three different laser diodes of 200 Watt each. And those pen-like structures were diodes.

Now coming to that pipe like the picture which we spoke about in the earlier part of the article. They are not pipes but wire.

The printer consists of a wire feeder in the deposition head and there is a push feeder close to the material spool.

This, according to the company allows you to gain very precise control over the wire feed.

Relax if you are tired of reading about the closed chamber mechanisms of many such 3D printers.

This explanation has something more than telling you that the temperature can easily increase because it has a closed chamber as opposed to an open chamber.

The company goes on to say how Additec uPrinter’s chamber is sealed and filled with Argon during deposition.

And we might not need to mention in the Cons of this printer that this is a closed printer because it vents the atmosphere and reduces the risk of breathing shield gas.

So, both raising of the temperature as well as post-processing is done with equal efficiency. 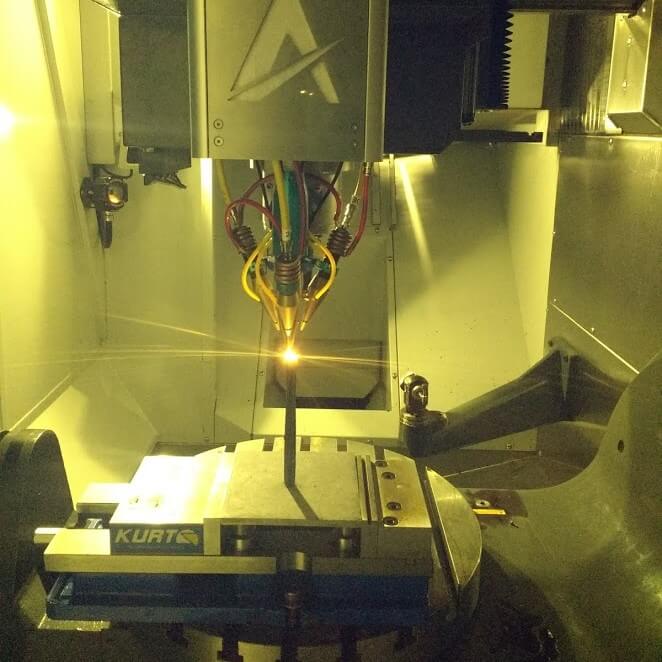 Unlike other websites, you would not find the typical listing down of technical specifications on Additec’s website.

So, all our specifications are taken from the Standard features section of the website.

While you already know about the laser Wattage that this printer comes with, let us tell you that you can also upgrade them to 1000 Watt if there is a specific requirement.

There is an integrated camera that lets you enable a live video feed through the web interface for remote monitoring of the complete printing process.

It is also possible for you as a user to take time-lapse videos of the ongoing printing process and then put in front of the questions to the company based on the same.

The printer can be controlled either via a locally hosted web interface or via USB. It is designed to get power from a single-phase 110 or 240 Volt power cable.

There are options from which you can select the weight of the printer to be either 75 kilograms or 100 kilograms.

The mentioned price of the printer on its website is $90,000 excluding shipping and vat, with 600 Watt laser power.

But like we mentioned earlier in the article there are modifications which the company offers in special cases.

Those modifications are in the area of Laser Power, Monolithic Depositions head, Additional Wire Feeder, Additional powder feeder as well as Automation.

And in case you want any of these modifications, you have to contact the manufacturer.

The contact form will be available on the webpage by clicking on the Contact Us, tab just beneath the modifications.

You need to fill out your details there and wait for the company to get to you. 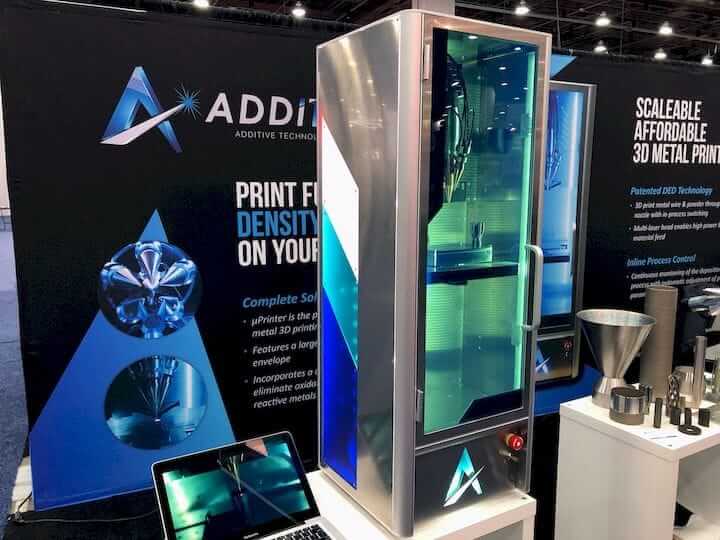 From the photos, the printer looks like a can storage refrigerator typically the one that gets to see in the stores that are storing Coca-Cola or any other cold drinks.

Remember that video which is one minute fifty-four seconds long? When you play it, you get to realize the precise working of this printer.

The video starts with a diode of laser working on a product and there is the constant interaction with the wire feedstock one after the other layer.

It is only after the end of the video, you realize that the company has given out the integrated camera’s recording in fast forward to you to know how the internals of this machine works.

But about the external of the printer, it is hard to guess from the available pictures.

There is no touch screen interface that you have, the internal of the machine is lit in the pictures in blue lighting.

There is the diode mechanism fixed at the top of the printer, when seen in the front view and there is a print bed, near about the center of the printer’s length.

All these pictures are taken by an Olympus digital camera.

We are guessing that the printer comes fully assembled because there is not a single picture depicting the printer in any sort of open way.

It comes solid and pretty much ready to print as soon as connected in one of the ways mentioned in the Specifications section of this review article.

There is a tab on the website that reads “Process.” The first option there is, the process overview which tells you complete information about how the printing process of this printer works.

In the Laser Metal Deposition technique, the filler material is a powder, is injected through a conical ring nozzle that is present around the Laser beam. 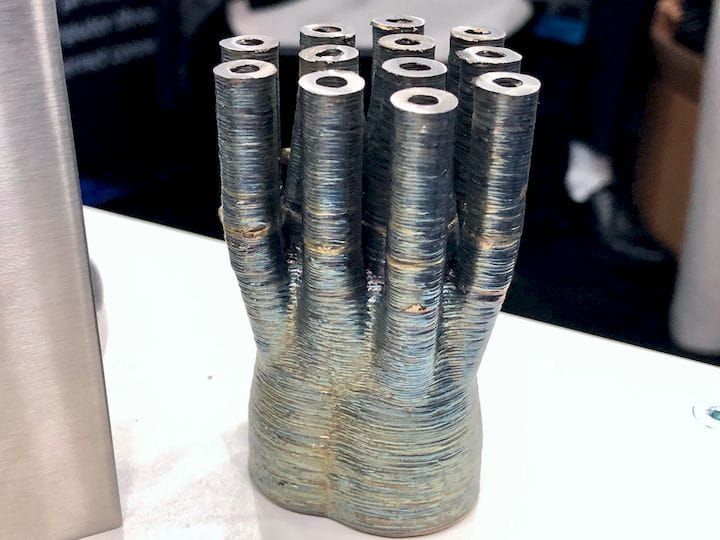 The Gallery tab on the website opens up the webpage that has some pictures which are of parts and functional prototypes that are manufactured using this 3D printer and they are mostly engineering parts like funnel, cylinders, etc.

Although the layers are visible in the pictures the finishing is up to the mark.

The manufacturing company provides toolpath generation software for this printer along with preconfigured profiles for common materials that are used in everyday printing.

However, there is no rule that the user cannot alter those settings.

But for reasons best known to the company the name of that software is not mentioned.

Under the Process and Systems tab, the company has tried its best to sum up the information anyone needs for using this printer and printing with it.

Apart from this, there is a Contact tab. Wherein you can enter your details and wait for the company to get to you.

There is an option to get in touch with the makers via phone and through email.

Having a quick recap on the main factors that we discussed in-depth, above would let you judge whether you are really wanting to buy this printer or not so much.

3D Print Quality: The surface finish is excellent, while the layers are visible.

3D Print Speed: No information is given on the website.

3D Printer Practicality: Engineering and automotive industry (just guessing from the pictures of parts and functional prototypes in the gallery).

3D Printer User Expectations: Perhaps professionals could come ahead and say whether the printer stands on their expectations in terms of quality or not.

There is not just a printer to check out on the website of this manufacturer, but there is also the complete system remember?

The first photograph that we mentioned about coming across on the website for the first time.

The text of which reads out to transform conventional machines into hybrid modern ones.

Also, Additec uPrinter is not just one type of a 3D printer because it offers an upgrade on its own.

So, you can customize it as per your needs. But whether to buy or not is something that we leave on to you.

All You Need to Know About 3D Printing Titanium