Belonging to the class of affordable 3D printers, Makerfarm Pegasus 12 has a high print quality that is considered to be an anomaly. So if you are yet to experience the market, you can definitely look forward to adding this to your list.

Available in three different sizes, Makerfarm Pegasus is manufactured by an America based company.

Though differentiating between build volumes of various models, Makerfarm has kept uniformity when it comes to frame and hot end options.

The former being made of Aluminum, whereas the latter is the part that’s from the company which is very renowned for making hot ends.

Makerfarm Pegasus offers a print bed that is one of the largest you can get while buying a printer under the budget of $800. 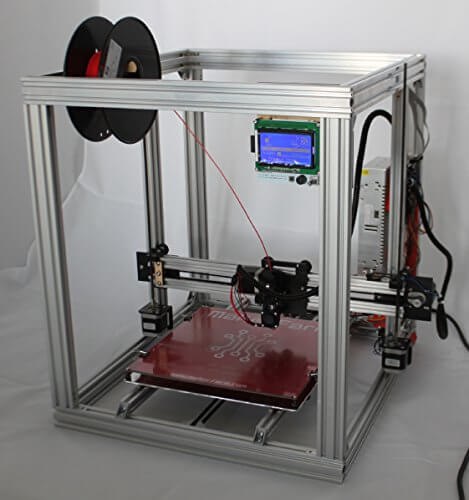 Although not being too user-friendly as other expensive printers, Makerfarm Pegasus works fine with an experienced hand.

It is to be noted how this printer belongs to those printers that have sprung out from the technological innovation in the field of 3D printing.

The innovation that aimed at bringing awareness about this technology to people, at the same time, enabling people who are already aware of the technology to buy and use it at a cheaper cost.

Having stated so, let’s start to explore the bits and pieces of this printer. From features to specifications, we will lead you on a journey that will give you an insight into how Makerfarm Pegasus 12 is when viewed in terms of parts and not as a whole.

The extremely rigid 20*40 Aluminum frame assures you that the printer would not vibrate even while printing a larger part at a higher speed.

A build envelope of 11.5 inches * 12 inches * 13.5 inches along X, Y and Z-axis would surprise you while you would be out there looking in the market for buying affordable 3D printers offering huge build volume.

And make you want to check the price of the printer again and again.

The RAMPS Electronics Standard board would save your work progress and start from there itself even in case of electricity failure.

Based on standard FDM 3D printing technology, Makerfarm Pegasus 12 offers 50-micron layer height in every part and functional prototype that’s being printed on it.

For making the user interaction and monitoring interesting, the printer is equipped with a graphical LCD Interface. Meaning that you can even print without using a PC if you wish to.

Aluminum is a material that is believed to be rigid and hence if the frame is made out of it, it has been extremely rigid.

But in case you do not know why the frame should be rigid, what benefit it does to 3D printing of parts or functional prototype, here’s an explanation for you.

And the nozzle system of the printer moves up again and again after a layer is printed.

So, there are chances of the printer to vibrate or move on to the desk where it is located in the frame is not rigid.

First things first, electricity is the fuel that you are doing to need to run this 3D printer for printing 3D parts or functional prototypes.

The manufacturer of this printer claims how they have used standard electronics of RAMPS Company for ensuring parts move in the way and at the time they are meant to.

The complete precise 3D printing requires the print head to move exactly when the layer is printed, in order to print the other layer.

Stating about the LCD interface, the printer has it located at the top right corner of the frame.

With this LCD interface the company is making an important point and that being, you can print without the inclusion of any computer in the printing process because you have the LCD interface.

Which is very good when you compare this to the printers that are available at the same price as this printer is.

This feature would let you print parts or functional prototypes of large size which are used in the aerospace defense industry, healthcare, or automotive.

A lot of the print quality is based on the layer height of parts or functional prototypes manufactured by a printer.

So, if you were to judge the print quality of any printer, you can do that by comparing layer heights.

As per the general conception, the lesser the layer height, the better the parts look.

And, the layer height of parts printed using Makerfarm Pegasus is 50 microns. This talks a lot about the precision this machine could offer.

V Slot Extrusion and 66 oz-in motors for all axis

The extruder is the place where the raw material for 3D printing is kept and heated to be brought on to the level wherein it melts on the printing bed of the printer.

The motors are to be used in the entire axis for the regular movement of the print head from the print as soon as one layer is printed, so it is necessary for the motors to function in a fixed and equal manner for ensuring equal printing of layer on each axis as per the design. 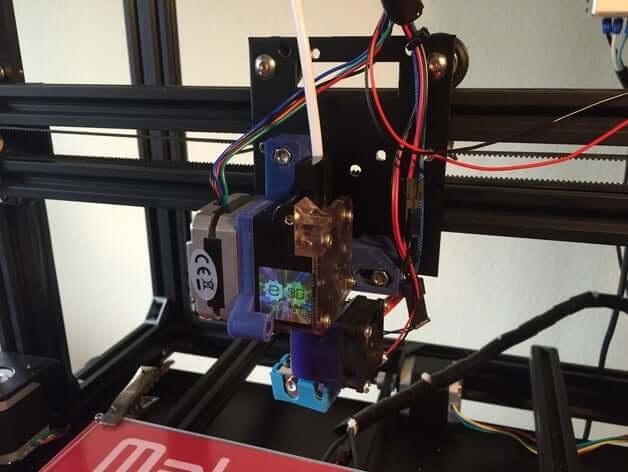 The printer’s dimensions when it is completely assembled, without the spool are 21.25 inches * 23 inches * 23.5 inches. It has an aluminum heat bed mount.

The layer height in the parts or functional prototypes produced by the printer is 50 microns. The printer uses GT2 pulleys and belts.

There are 66oz-in Motors for all axis’ pre-wired with the printer and the bed leveling that is done is by Firmware Bed leveling.

There is a micro Adjustable Z End stop inside the printer.

The price of Makerfarm Pegasus is $645.

There is a filament holder is connected with the nozzle system which is capable of moving up and down with the help of the rails on the frame of the printer.

The printer is available in a DIY kit that requires you to assemble everything including the gantry frame, as well as the X-Y-Z axis motor mounts, belts, printer hot-ends, and extruders.

As reported on reliable 3D printing websites, the complete setup of this printer can take about three to four hours.

Reading all this might make you want to compare this printer with a printer that comes completely assembled.

But, there is an advantage of assembling printer parts on your own. And that is, you get to see which part is in coordination with which one.

So, when the time comes to make some smaller changes or something isn’t working how it should, you know which area to look out for in the printer.

Having stated so, there are sixteen steps involved in the assembly of this printer.

The nuts and bolts which come with the printer for its assembly are of metric sizes M3, M4, and M5 ranging from one to three centimeters long.

Coming to the motors, the Y and Z motor brackets need to be precisely located at specific places along with their respective frame supports.

Also, there are no pre-drilled holes for suiting the brackets so you’d have to use your ruler.

Although this is not a problem requiring much care, it does add another factor to be taken into consideration for ensuring dimensional accuracy in parts and functional prototypes printed by the printer.

The drive belts of this printer are also not pre-cut to length, so during your assembly, you’d have to measure and cut accordingly.

After the cutting is done properly, secure it by zip-tying them through the drive mechanisms.

The printer is based on FDM 3D printing technology wherein you would need spools of materials that you wish to 3D print with.

You would have to heat them up and then the melted form of that material is something that would be spread on the print head layer after the other.

FDM is an abbreviation for Fused Deposition Melting. It is the most preferred 3D printing technology, based on which the majority of 3D printers in the field function.

And once that will cool down, the final part will be 3D printed.

And, it may differ for the same models as well when the filament choice or any other responsible variable differ.

In the price range that Makerfarm Pegasus 12 falls, there are not enough printers that offer 50 microns layer resolution for parts and functional prototypes.

The print quality is consistent whether your part size is smaller or bigger.

Makerfarm Pegasus 12 is also able to manage high quality while printing continuously for hours. Making this printer suitable for a number of applications.

You can make your Account on the Makerfarm store online. Doing so would avail you options to connect with the makers of the printer.

Factors that are mentioned in the brief below should be taken into account while purchasing this printer.

3D Print quality: Layer height of 50 microns would mean that they are hard to see.

3D Print speed: Faster because of the V slot extruder.

3D Printer capability: The printer prints with all the popular materials.

3D Printer Practicality: It has all the features that you would wish to have in a printer to make you familiar with the 3D printing technology.

3D Printer User expectations: If you are a beginner in the field, your expectations in terms of cost, would be extremely satisfied.

There are highs and lows of the printer, just like every other.

But if you are yet to experience the market, you can definitely look forward to adding this to your list.

Comparing it with the printers under a similar price range would offer you a better insight of what this machine is worth.

3D Printing Brim - Learn How to Print With