If you are expecting the highest quality in parts or functional prototypes printed by the printer, you would not be let down.

Being an entry-level 3D printer, Protofab SLM 150 gives you a broad choice of materials such as Stainless Steel, Cobalt Chrome, Bronze, Titanium, ...
Add to wishlistAdded to wishlistRemoved from wishlist 0
Add to compare
Check Price
ProtoFab

Jack Wu is the name of the founder and CEO of the company. He was a chemistry teacher and life-time scholar as per the information mentioned on the About us page of the company.

The ProtoFab project was started by him because he had an understanding of the potential of additive manufacturing and wanted to commit to becoming an industry leader in the 3D printing industry.

Despite being a successful entrepreneur, Jack, we are informed, finds the time to teach industrial design at the Lu Xun Academy of Fine Arts and inspire hundreds of young designers to develop their ideas and create new solutions.

In this article, we are going to look at various aspects of the Protofab SLM 150 printer starting with its features.

There are only two-three features that are present on the webpage dedicated to this printer on the manufacturer’s website.

We have tried to sum that up into two which are mentioned below.

These features are something you should look out for in every printer that is priced in a similar range.

Wide choice of materials to 3D print from

Often industrial SLM 3D printers do not offer their users a good choice of 3D printing materials to print parts and functional prototypes from. Thankfully, the Protofab SLM 150 is not like that.

It offers a broad choice of material such as stainless steel, Cobalt Chrome, Bronze, Titanium, Aluminum, etc to print from.

The company’s patented layer technology allows the generation of the finest feature detail and thinnest wall thickness increasing the overall quality of the parts and functional prototypes.

The layer thickness range of this printer is also something you can compare with printers in the same price range to get an idea about it completely.

Overall the printer is able to print parts and functional prototypes with intricate designs.

The surface finish quality of parts is reported to be up to 5Ra micrometers or less which is great when you compare this with other printers in the same price range.

In fact, quality parts and functional prototypes are the main selling point of this printer, because if you see printers based on other 3D printing technology, they would offer you more build volume at the same price, but not the same quality.

The Protofab SLM 150 weighs 620 kilograms and offers a layer thickness range of 0.02 to 0.1 mm in every part or functional prototype that is manufactured on the printer.

The scanner used for scanning the powdered form of 3D printing material is the Scanlab galvanometer scanning system, which scans at a speed of 10 meters per second.

For curing the parts or functional prototypes built on this printer the laser used is of 500 Watts Yb-fibre laser that offers a spot diameter of 25 to 50 micrometers.

The powdered form of the 3D printing material is delivered on to the build platform of the printer by a high-performance heat resistant silicon rubber blade.

For keeping the temperature of the print chamber inert, argon or nitrogen is used as an inert gas.

The printer is equipped with safety precautions according to the standard GB/T 15605-2008 dust explosive & pressure relief guide.

Some of the materials that you can print using this printer are Stainless steel, Cobalt Chrome, Bronze, Titanium, Aluminum, etc.

You would have to Get A Quote for this printer to know its exact price as the company has not mentioned the exact price of the printer on its website explicitly.

However, there are many ways of contacting the printer manufacturer, you can reach out to them via email, Skype, or contact number.

There is also a separate tab titled Get A Quote that you can click on to fill a Contact form that will let you contact the company. 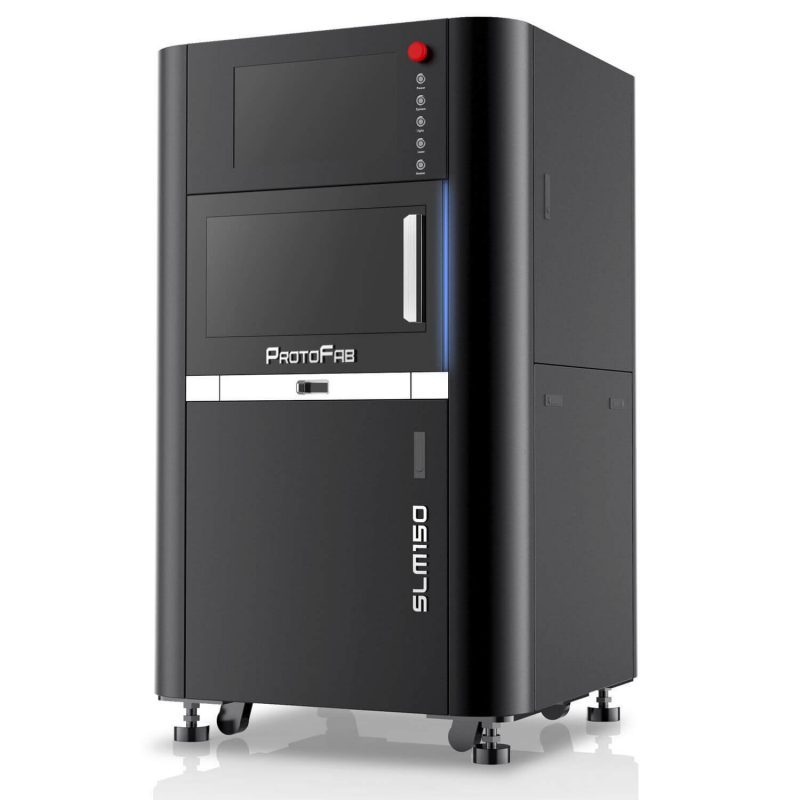 A picture of the printer uploaded on the webpage dedicated to it on its manufacturer’s website makes it look like a refrigerator on wheels.

Besides the transparent part, there is a red-colored button which can be presumably for stopping and starting to print a part or functional prototype.

The print chamber of the printer can be opened and accessed via a door.

And there is a lower compartment in which the laser source should be kept like in most of the industrial SLM 3D printers.

ProtoFab SLM 150 like most industrial SLM 3D printers do, comes fully assembled, waiting for you to give it an input of power and start printing.

You can also, for getting complete confidence with your hands over the printer contact the company, read the brochure of the printer to know more about it.

SLM, the 3D printing technology on which this 3D printer works, is very similar to SLS, and both processes are covered under the powder bed fusion umbrella.

So, unlike FDM which uses a filament for manufacturing parts or functional prototypes, this printer uses a powdered form of the 3D printing material.

Another major difference is the type of feedstock or powder the printer uses.

In comparison to SLS 3D printing technology which uses mainly nylon (PA) polymer materials, SLM is specifically for metals, so you can see the name of 3D printing materials that are used by this type of 3D printer in the Specifications section.

The basic process of printing remaining the same, the laser sinters the powder together, layer-by-layer, until the model is complete depicting the 3D design file that the printer has interpreted.

However, the other big difference between SLM and SLA is in the use of support structures.

Because of the constraints of the SLM process and the weight of the printing material, SLM 3D printing technology requires support structures to be added to any overhanging features.

Whereas when you are using SLS 3D printing technology the surrounding powder material can provide enough support, allowing freeform shapes and features to be realized.

Although it completely depends on what material you are 3D printing with, what is the electricity that is been consumed, or the infill of the part or functional prototype.

Pictures of each of the parts or functional prototype are available on the webpage, just before the webpage ends.

You can click on the small picture to get complete details about each one of those.

You will also be able to access the pdf files about each part or a functional prototype.

You can also drag your mouse’s cursor on the Industries tab to view Automotive, footwear, electronics, medical, dental, and art, and fashion as the industries in which parts and functional prototypes made by the printers made by the manufacturer come into use. 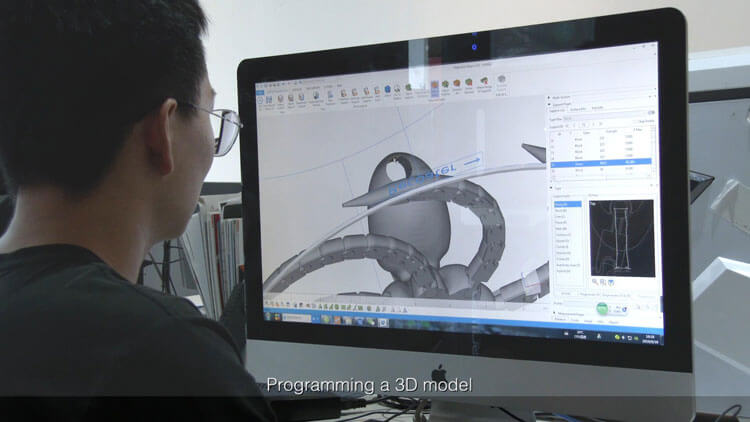 Protofab DV 6.0 is the software that the printer is compatible with.

The name of this software is listed in the specifications mentioned about the printer on the webpage dedicated to the printer on its manufacturer’s website.

The data file format which is compatible with the printer is STL, whereas the operating system to which the software is suited is 64 bit Windows 7.

There is a contact form available on the webpage dedicated to the printer which asks for your details assuring you that the company would get back to you.

You can also send them a 3D design file if you wish to.

Apart from this, the contact number of the company is mentioned on the head of this webpage with its email.

Apart from the general ways to contact the company, the company also offers contact via Skype wherein you could be if need be, guided via a video call and the doubt or your query regarding any process of the printer or functionality of the part can be solved on the spot. These are the ways in which the company assures you to provide customer service.

Below mentioned are the cost, quality, speed, capability, and practicality of the printer.

Some points that are summarized from the complete article are also main when you are out there buying a 3D printer in actual and not just researching for the sake of increasing your information about 3D printing technology.

3D Print quality: Pictures of the part or functional prototype are worth seeing. Also worth reading is the information mentioned about each one of those, listing down their applications in various fields.

3D Printer capability: The printer can print with various metals that are mentioned in the Specifications section of this article. Overall they are the same general ones that every SLM industrial 3D printer is offering to print with.

3D Printer Practicality: A lot has been said about the industries in which printers of the same company have found an application that gives an idea about the practicality of the printer.

If the cost of this printer and the post-processing are things that you can handle to get a high-quality print in parts and functional prototypes manufactured by the Protofab SLM 150, you can definitely buy it.

3D Printer Under-Extrusion? - What Causes It And Easy Fixes