This printer is a solution for all those users who are willing to pay a higher price for a higher quality of parts and functional prototypes.

Being the smallest machine in SLM Solutions’ lineup, SLM 125 includes many of the top quality features of larger platforms in a compact footprint. ...
Add to wishlistAdded to wishlistRemoved from wishlist 0
Add to compare
Check Price
Slm Solutions

The SLM Solutions is a company name that is credited for the creation of SLM 125 which is an industrial 3D printer.

SLM solution is a manufacturer based in Germany.

This printer is based on the Selective Laser Melting (SLM) 3D printing technology in which melting and fusing of metallic powders take place with a powerful laser beam.

At the start of this process, a layer of solid metal is created, when the tray holding the 3D print is lowered, the powder is layered on top of it.

The sintering is followed by the laser that resumes for a new layer and that is how a 3D part or functional prototype is formed i.e. Layer after layer until completion. 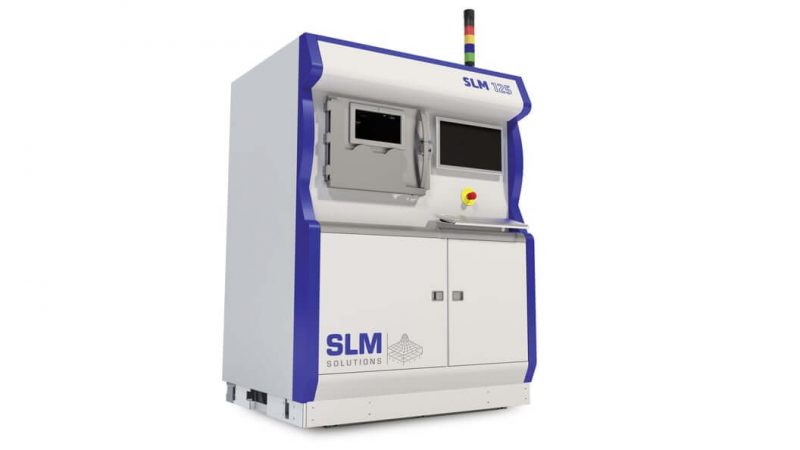 The SLM Solutions SLM 125 is claimed to have been designed for the production of medium-sized components with high precision and surface quality.

In this article, we will learn in-depth about the various aspects of this printer starting with features.

Below are the points that strikeout to us when we study the printer in-depth.

It is the most flexibly applicable machine capable of generating high productivity which has been designed for quick results in the research and development sector that goes on the 3D printing technology that the printer is based on.

In addition, the SLM 125 provides a build volume reduction of 50 mm x 50 mm x 50 mm thus decreasing the amount of powder by 80% which is a big achievement in the field of SLM 3D printing technology.

You can build the most complicated parts and functional prototypes that you have thought about using this printer.

The system on which this printer works processes most metal powders through a material saving, closed-loop powder handling unit which decreases the chances of any flaw in the system.

Changing the metal powder in this printer is quick, easy, and designed to lower your production costs by a considerable amount.

The SLM 125 is a printer that’s available with optional software that helps the printer read the CAD/STL data or slice data for configuring the printing process-specific and build part-specific parameters.

This is the software on which the complete basis of 3D printing a part or functional prototype using this 3D printer is based on.

The open operation concept of the printer enables you as a user for the construction processes to be carried out individually and customized manually.

Thanks to the machine’s compact design, that 3D printing with few powder-transporting components, as well as materials can be changed quickly and easily.

Equipped with a variety of options and expansion possibilities, the printer’s system can be adapted to individual customer requirements.

The Powder Sieving Machine PSM acts as a perfect complement to the SLM 125 machine.

During the sieving process, which happens right before layering the particles of the material you wish to 3D print down on the print bed, the rough particles are sieved out and are separated in an overflow bottle.

Here the fine graded are placed on the print bed and are made to be scanned via layers, whereas the reusable metal powder from the waste, which has the defined grain size, is transported to the storage container and can be directly used again.

This process is responsible for the machine’s low waste producing capability.

In fact, it is also responsible for the fact that the machine produces parts and functional prototypes that have a high quality of dimensional accuracy.

As a user, it is easy for you to get the rough patches of the powdered 3D printing materials separated without human intervention just before the material is supposed to be taken into use.

As well as it is necessary for the 3D printing process to go through this process which increases the complete chances of increasing the efficiency of producing parts and functional prototypes with dimensional accuracy. 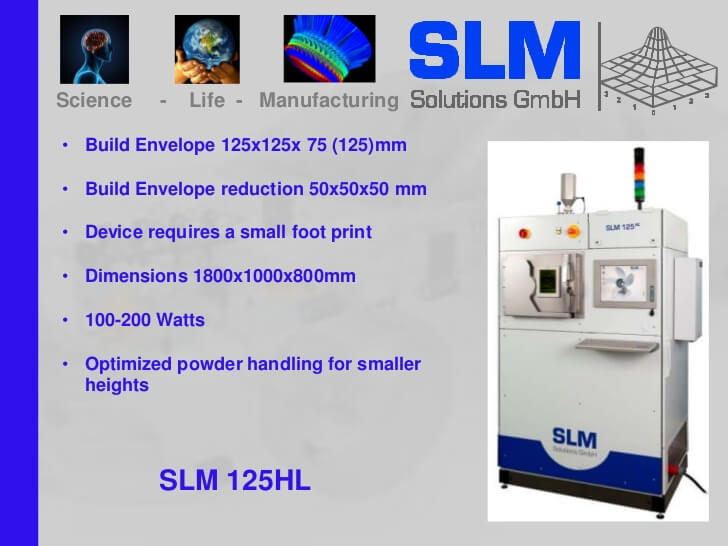 The 3D optics configuration of this printer is a single 400 Watts IPG fiber laser which helps users to cure each and every layer they print using the nozzle system as well as the print head of the printer.

SLM 125 has a build rate of 25 centimeter cubic per hour with a variable layer thickness ranging from as low as 20 micrometers to as high as 75 micrometers with one-micrometer increments.

The minimum feature size that can be printed using this printer is 140 micrometers and the beam focus diameter of the laser of SMA 125 ranges from 70 to 100 micrometers.

The maximum laser scanning speed of this printer is 10 meters per second.

Average inert gas consumption in the process of 3D printing a part or functional prototype is two I per minute.

Whereas the average inert gas consumption purging is seventy I per minute. The gas that gets consumed is Argon.

The price of SLM 125 is not mentioned on the website of the manufacturer of this printer.

There are a contact number and an email id mentioned on the webpage dedicated to the printer, which you can use to get the price of the printer. 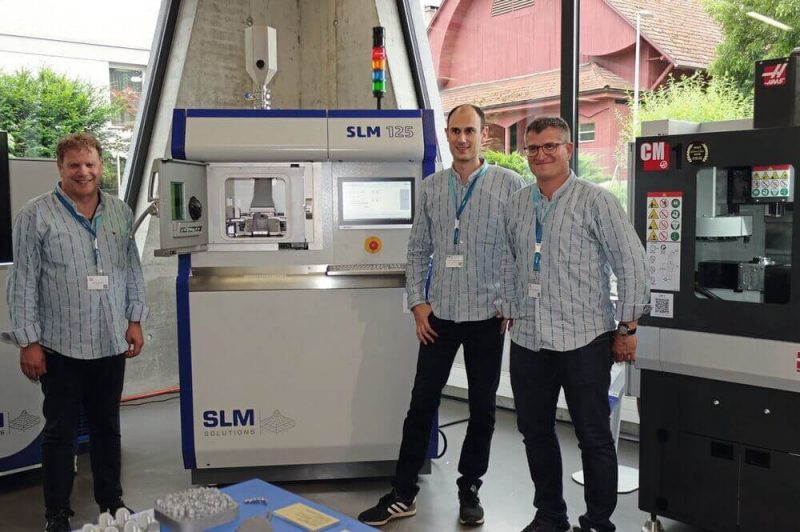 A twelve-second long video of the schematic of the printer as well as the animated printer is given on the webpage dedicated to the printer.

The first few seconds of the video show the printer’s front schematics which is basically divided into two parts the upper one and the lower one.

While the lower one is not further divided, the upper one certainly is.

The side of the printer is almost a single piece, although there is a slot when you reach the bottom of the same.

The left part of the upper one contains access to the print chamber of the printer by opening the door.

The other way to know about the same is from the downloads section available on the website, which is present just before the webpage ends contain a three and five pages pdf about the brochure of this machine as well as the metal powder used in it, respectively.

Every SLM 3D printer has a chamber filled with metal powder which is then spread across the substrate or build plate of the printer in very thin layers by a coater blade.

A high powered laser beam is then used to fuse a 2D slice of the part by selectively melting the powdered material.

The build plate of the printer then drops down by the height of one layer, and incoordination, the coater spreads another layer of fresh powder finely across the surface.

This process is repeated until you have finished printing the complete part or functional prototype that you intended to.

This whole printing process is performed in a controlled atmosphere inside the 3D printer. After the part or functional prototype is built, it can be removed from the printer’s build plate, which is often done with a band saw, after which you need to remove the supports.

A huge disadvantage of using this method compared to other methods is the use of the support material in it which is the same as the part material, this can be difficult and a time-consuming process.

The surface finish of the sintered parts or functional prototype is rough and, depending on your requirements, may also need some post-processing.

It is also common for machine parts for achieving fine tolerances and finish fine features, surfaces, and holes after the parts or functional prototypes are printed.

The printing cost per part is greater than other technologies that do not employ a laser source for melting or curing of layers. 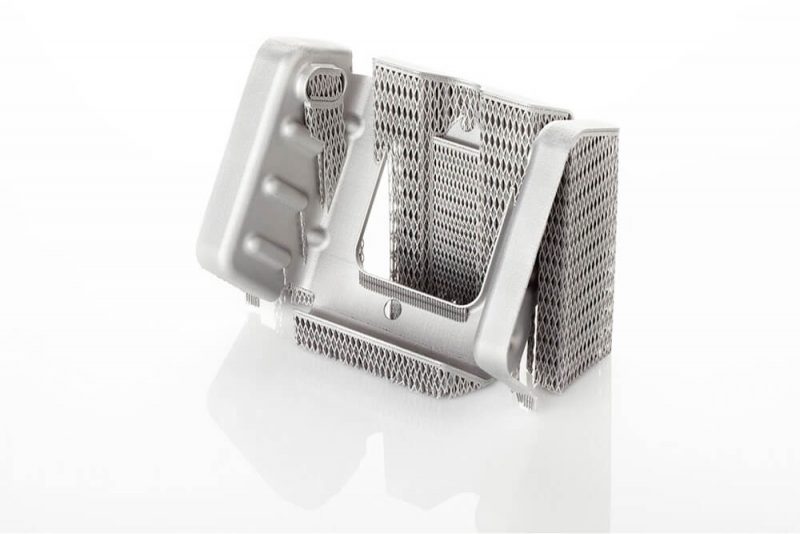 The parts and functional prototypes manufactured by this company’s 3D printers are used in Aviation and Aeronautics, Automotive, Energy, Tooling, as well as Medical or Dental as per the information mentioned on its website.

So, the part quality manufactured by the printer must meet the requirements of dimensional accuracy in these fields as well as the intricacies in the design.

When you click on the software part on the website you encounter MPM, LPM, and LCM monitoring software systems that the company offers.

Each of these has its own advantages which you can read about on their website; there is also a video available on the website for a better understanding of the complete system of uploading a 3D print file on the printer.

The Contact tab on the company’s website exposes you to a contact form that asks for details about you, reading which the company can get back to you.

The points mentioned below are given to summarize the complete article and help you make the buying decision in a short span of time.

3D Printer cost: You need to contact the company for getting the price of the printer.

3D Print quality: Looking at the pictures uploaded on the website, you get a good idea of the parts or functional prototypes that are manufactured using this printer.

3D Printer capability: The monitoring capability of the printer impresses you because you might have never encountered a company that has taken into account so many factors for monitoring as much as this company has.

3D Printer User expectations: Users who are looking for greater build volume at a minimal price would not be much satisfied with the printer.

This printer is a solution for all those users who are willing to pay a higher price for a higher quality of parts and functional prototypes.