Wax 3D Printer – How They Work & Which to Choose?

Amongst the many names that come under the title “3D printing technologies”, a few offer an option of wax 3D printing. One can print models by selecting wax as a material.

Although they call it wax, the material is not particularly natural wax, when in use. The material which is used with a wax 3D printer differs in terms of properties owned by the natural wax.

Fused Deposition Melting, Stereolithography, selective laser sintering is not as popular with wax 3D printing, as much as material jetting is.

This technology is not only the most popular one with wax 3D printing but also is the most optimal way in which one can print using wax.

It is to be noted that wax 3D printing is a very associated term with jewelry products. Having said that, you might have some curiosity bulbs lit in your head when you would have come across some terms.

Material jetting, wax 3D printing, and its association with jewelry products and how do wax 3D printers work? Are the topics that we would be covering in this article one by one.

We would also find out a few of the most trending 3D wax printers that have been able to impress users with their efficiency and accuracy of results.

What are the Basics of the 3D Wax Printing Process?

A 3D wax printer has a similar workflow as any of the other 3D printing processes. Starting with the 3D design, it goes for a layer to layer production.

And, in the midst of it, what brings a difference in the working of these processes is the selection of material, the technology used for creating each layer, and few others.

So, let’s find out how 3D wax printing works. And, what are the different steps involved in this process while a few of the standard ones remaining the same?

The image shown below would help: 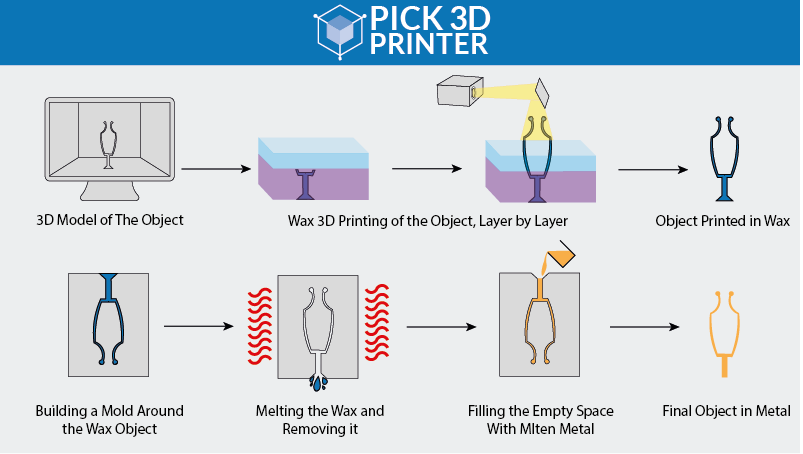 What is Material Jetting?

Like other printing processes, this one too starts by pouring resin into the material container. Like in SLA 3D printing, in material jetting too, thermoset photopolymer resin is heated to attain particular viscosity.

The main components of a printer that works using material jetting are a) print heads. 2) UV light sources. 3) build platform and 4) material container.

Here the arrangement is that the UV light sources and print heads are suspended along a carriage which is on the X-axis.

As the carriage along this axis starts its journey across the build platform, the print head begins to particularly pour out or, so to say, jet tiny resin droplets.

With the print heads, the UV light sources follow. The picture below depicts material jetting in 3 parts i.e. a) initiation, b) at the midst and c) when a product is completed.

The process involving the creation of the first layer is repeated for other layers until the product is completed. Material jetting is eccentric in the way that it offers line-wise deposition.

This is something that’s not offered in FDM, SLA, and SLS as all the three offer point-wise deposition. Now that you have an idea of the technology, based on which 3D wax printers work, let’s get to know why this is so popular and associated with jewelry products.

Why are Wax 3D Printers Used to Make Jewellery Products?

The manufacturing of jewelry products is a very detailed topic for obvious reasons. The cost of raw material is very high than others makes this technology a bit expensive than others.

Because of the involvement of high-end precision, material jetting based 3D wax printers are used to produce jewelry products like no other.

The secret lies in the detailed mold that is produced by using material jetting. Unlike other techniques, the resin here is poured drop by drop, constituting the complete line.

To produce a gold ring, jewelers must design a mold where the liquid material is poured that then solidifies to take the desired shape of the ring.

This high-end detailing is only possible by material jetting. As you have already seen the basic outline of 3D wax printing, you have an idea about how the printing process works inside a 3D wax printer.

Once the model is created inside the 3D printer, wax 3D printers can be used to produce a wax model of the ring. After the completion of this process, those models are placed into a liquid solution and the soluble part dissolves.

After this the material solidifies, the mold heats to the point where the wax model starts melting and leaves the space for gold, silver, or platinum, whatever the choice is.

The final step is to inject the material, jewelry of which you wish to make. This is how a 3D wax printer works based on material jetting to produce jewelry items.

If you have read about other 3D printing processes such as FDM, SLS, SLA, you’d be able to differentiate material jetting from them quite easily.

By now, you certainly are now quite familiar with the process that goes inside a 3D wax printer that produces some of the most beautiful jewelry that you have seen.

Hence, now it’s time for the recommendation of some of the names of those wax 3d printers that work in practical terms to give shape to the most beautiful imaginations of the users.

The name of wax 3D printers is so much associated with jewelry that they are sometimes even called jewelry producing 3D printers.

Solidscape has three models in this series: S350, S370, and S390. Designers of these 3D printers have worked hard to make sure all of these enter the list of wax 3D printers or printers that are used to make jewelry.

The dissolvable supports that are provided in all the three options are proof of the hard work and passion shown by engineers and their designers.

Amongst these three S350 and S370 are best-selling wax 3D printers from Solidscape. The reason behind them being best-sellers is credited to the absence of post-processing in both.

Thanks to the designer for one more thing i.e. providing a wax 3D printer that does not need much assembling. These wax 3D printers are very well designed and manufactured in terms of their functionality and delivery system.

Speaking about a delivery, the printer is known to provide excellent print quality which enables you to create designs that are otherwise impossible to be brought into reality.

Solidscape has also ensured that its users do not have to get the software from outside and then learn how to use it with their printer. All of them come with in-built software that is up to the mark and easy to use. The software can scale CAD files too.

Targeted primarily for jewelry making, S390 is the most latest 3D printers in the "S300" series of Solidscape. Coming in the market after S350 and ...
Add to wishlistAdded to wishlistRemoved from wishlist 0
Add to compare
Check Price
Solidscape

This is a wax 3D printer that people often are dubious of buying because of its cheap price. Peopoly Moai is just too cheap for anyone to question its quality of products.

I think the reason why Peopoly Moai is cheap is that it is an SLA based 3D printer and not multi-jetting. Yes! It’s one of those rare ones. Also, this wax 3D printer is known in the world of 3D printing for being a simple printer that is easy to setup.

The printer comes with a tailored version of Cura software that allows you to switch between different layer heights. A brief into the SLA technology would tell you from the market that it has a negative review.

So, Peopoly’s audacity is something that is meant to be appreciated. Apart from that though this machine is lower in cost, it doesn’t at all compromise on quality.

The height as small as 25 microns can be achieved with pinpoint precision using this wax 3d printer. Not only Peopoly has an easy to use build-up, but also do the makers provide a physical sheet that can be used for calibrations.

Overall if you wish to start afresh in jewelry making by 3D wax printing and don’t wish to invest much, this can be your take.

3D Printers by Peopoly Moai are the first of its generation Stereolithography based assembly printers. The company is known for its low-cost offering ...
Add to wishlistAdded to wishlistRemoved from wishlist 0
Add to compare
Check Price
Peopoly

The printer needs to be placed in a moderate climate because it takes more time to heat the resin. Formlabs Form 2 comes with a graphical interface that is extremely helpful for all its users to keep a track of the process.

The menu in the LCD touch screen provided in the front of this 3D printer isn’t overloaded with too many options that confuse you.

This printer by Formlabs is however designed in such a way that it would change your impression completely. Because the post-production process for this printer is as easy as in an FDM or multi-jetting.

The connection between software and hardware is where Formlabs steals the show. Formlabs have their tool that is called PreForm.

Not only like other 3D software, PreForm lets you import STL files, but also does it auto-repair the broken meshes. There is also a one-click print button that can be used for most of the cases.

With great features and various inbuilt capabilities for higher resolution printing, Form 2 has gotten into the list of most popular choices of 3D ...
Add to wishlistAdded to wishlistRemoved from wishlist 0
Add to compare
Check Price
Formlabs

Jewelry making industry is a very complex niche that involves lots of precision. Wax 3D printer normally based on multi-jetting 3D technology can provide you the exact amount of precision that you are looking for creating jewelry items.

The cost of these printers may appear to be huge at first, but after some use, you’d find it purely justified. The machines do payback and they pay back soon. So, if you are willing to expand your business, there won’t be a better time than now.