With FDM 3D printing’s failure in not letting people achieve the kind of quality they wish to, there has been a search for a 3D printing technology that is not only able to provide a satisfactory volume of part or functional prototype, but also quality.

And this search has led people to opt for Stereolithography, Powder Bed fusion techniques, and even Electron Beam Additive manufacturing, and maybe a lot more.

In this article, we are going to take you to four important aspects of this technology. Starting with the overview of this technology, its history, how does it work inside a 3D printer that you purchase, its advantages and limitations. So, let’s get started.

What is DMLS 3D Printing? 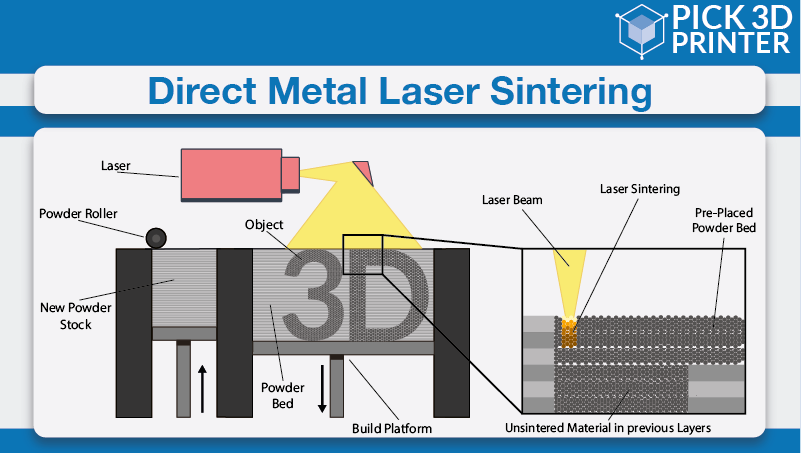 This process of 3D printing is often referred to as the modern powder metallurgy process of manufacturing parts and functional prototypes.

It is a much more mature process of metal molding technology that uses heat and pressure for forming metal parts and functional prototypes that finds its applications in various fields.

So one thing you get to know for now is that you are dealing with metal powders, instead of filaments and resins as in the case of the two most popular techniques for 3D printing i.e. FDM and SLA.

Typically the metal particle size is in the order of 20 to 40 micrometers.

This particle size is important when seen from the layer resolution of the final part or functional prototype.

The smaller the particle size, the finer the order of layer resolution in the manufactured part or functional prototype.

However, there is a basic point of difference between the two technologies.

Fusing the metal powder and the temperature range used for the same is where the difference comes between DMLS 3D printers and the SLM 3D printers.

SLM 3D printers will heat the powder that is spread on their print beds until the powder completely melts into a liquid. But DMLS 3D printers do not go to that extent.

So, a lesser amount of energy is needed for operating DMLS 3D printers compared to SLM 3D printers.

For this reason, DMLS is more famous with metal alloys whereas SLM works best with pure metals. 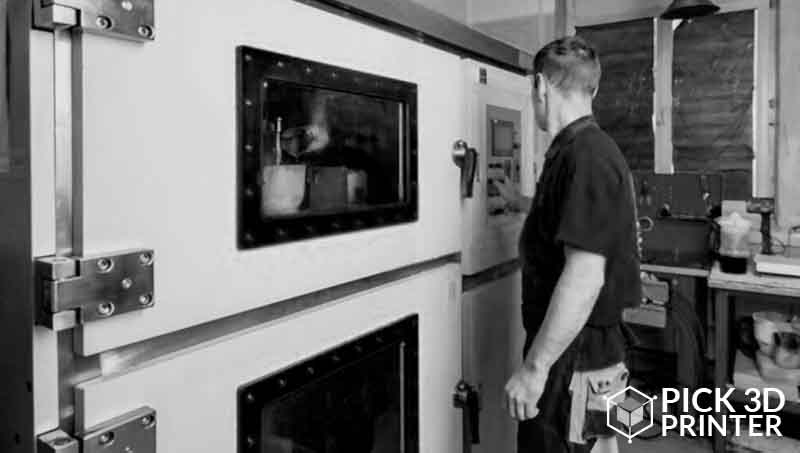 EOS, a company based in Munich Germany is known to have developed additive manufacturing technologies for laser sintering of metals and plastics.

Till the time the company gained worldwide rights of SLS 3D printing technology, the advances in the development of even more efficient technology.

And that quest of developing the technology more and more, the company led to finding DMLS 3D printing technology for manufacturing of parts and functional prototypes.

The first lot of DMLS 3D printers were produced in the year 1995 and since then, EOS has been a leader in this technology to date.

The only change being SLM was developed at Fraunhofer Institute of Laser Technology.

SLM has also advanced over these years, with the court issuing multiple licenses and cases in the matter.

How Does DMLS Printing Work? 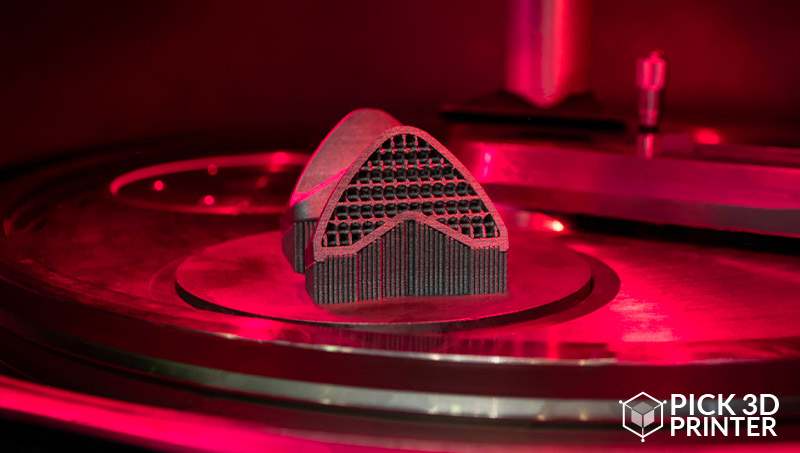 The model, slicing, and printing layer by layer is one pattern that DMLS shares with other 3D printing technologies.

The change comes in the mechanism once a model is created and sliced with the suitable software.

However, once the code needed for making the part or functional prototype is supplied to the printer, the process of 3D printing can begin.

For starting the desired DMLS 3D printer, the hopper of the printer is filled with metal powder that you wish to print the part or functional prototype with.

Once the process is started, the heaters of this printer start heating the metal powder to a temperature that is in the sintering range of the corresponding alloy.

For the execution of this complete process an inert gas is used. The use of inert gas is for protecting the heated powder as well as the part as it is built via the 3D printing process.

The building of layer after layer begins with a thin layer deposition on the build platform of the 3D printer.

Once this process is completed then the laser’s participation in the process of 3D printing begins. Selective laser sintering of the powder into a solid part is done hereafter.

Whereas the sequence of dispensing a layer of 3D printing material and its sintering continues till the production of part is completed.

What remains, here onwards is the cooling of the solidified part or functional prototype.

When the part is exposed to cool down, the surrounding loose metal powder is removed from the printer as a part of the post-processing and other essentials are done.

The parts or functional prototypes manufactured from the DMLS process can then be sent for higher finishing using machining, heat treatment, or surface finishing.

All of the steps that we have stated in this process remain the same for SLM 3D printing as well, but instead of sintering the metal powder, it is melted, and then the process continues. 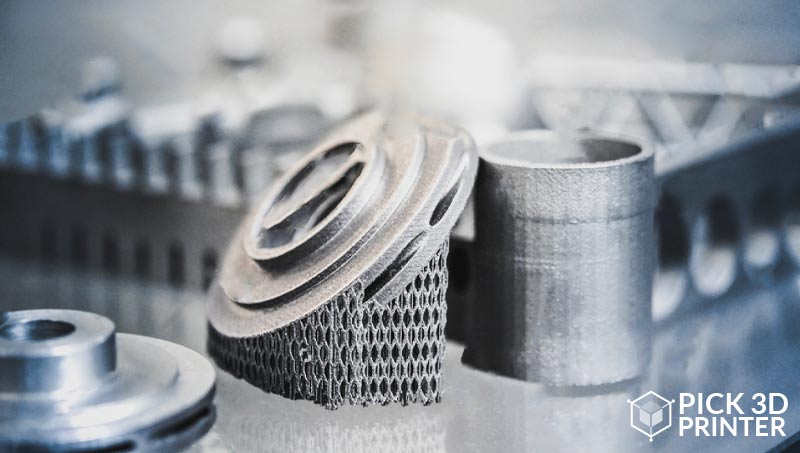 Every 3D printing technology that is used for making parts and functional prototypes has its own lists of pros and cons and so is the case for this 3D printing process as well.

Because DMLS and SLM are fundamentally the same procedure they share a lot of these pros and cons that we care about you have exposure to.

As far as the pros of this technology are concerned they are similar to most other 3D printing technologies.

Because such a quality of a part or functional prototype cannot be made using any subtractive idea of manufacturing.

Having said that let’s look at the Pros of this method.

After having seen through various areas related to DMLS 3D printing technology, let’s look at the application that parts and functional prototypes produced by it are used for.

Application of the Process 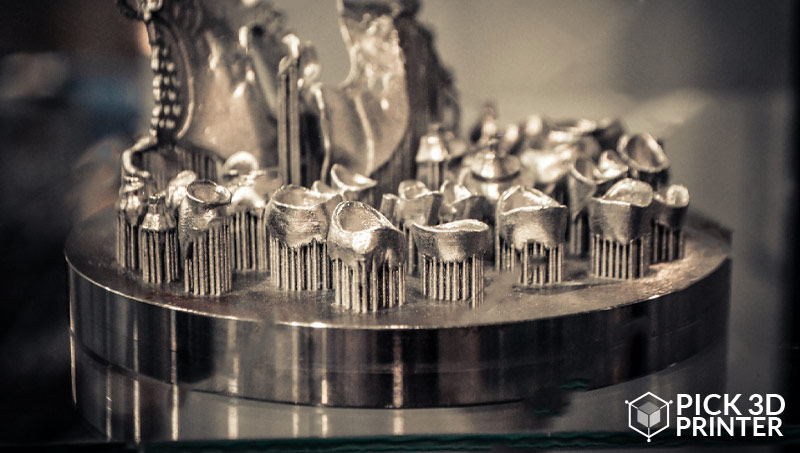 The process has found applications in the field of Medicine, Dentistry as well as Aerospace.

Starting with Medicines you would be able to see custom prosthetics modeled and printed using titanium alloy for replacing portions of bones that are lost in an accident or any other diseases.

Not only do they have the strength needed, but they are also resistant to attack by the body.

And the porosity of these parts and functional prototypes help bones grow into a prosthetic structure. These prosthetics can be customized according to the problem of the patient.

In dentistry, DMLS 3D printing is used for making bridges, crowns as well as partial dentures which can be easily modeled for the patient.

Even using high-strength materials such as Cobalt-Chrome. In the field of aerospace, DMLS is able to create complex geometries that other 3D printing technologies cannot.

Weight reduction which is the most important concern in the field of aerospace is accurately taken care of by this 3D printing technology.

As well as increasing the strength and durability of the parts and functional prototypes used in the industry is also some area where this technology is proven to be greatly beneficial.

Not only simple brackets and complex turbines can be produced using the technology, but also complete rocket exhausts can be a thing.

People generally tend to have biased when it comes to 3D printing technologies. They tend to think that this technology is only applicable to plastics. But that isn’t the matter.

And technologies such as DMLS 3D printing proves so. Complex parts made from precious metals can also be manufactured using this 3D printing technology.

Although the technology is not yet able to produce parts and functional prototypes of the same volume SLA and FDM is able to, it is growing.

Because the research is on and the teams are working towards this agenda and making the technology more and more accessible and flexible and hence beneficial.