This printer scores on points such as easy maintenance, self-lubricating bearings, interchangeable print heads, and no regular maintenance in the long-term.

The way in which pictures of this printer are posted on the webpage of its manufacturer’s website is amazing.

You get to see each part zoomed in, exactly how it looks while in operation, be it the print head of the printer, the nozzle system, the rails, the touch screen interface, and the body. 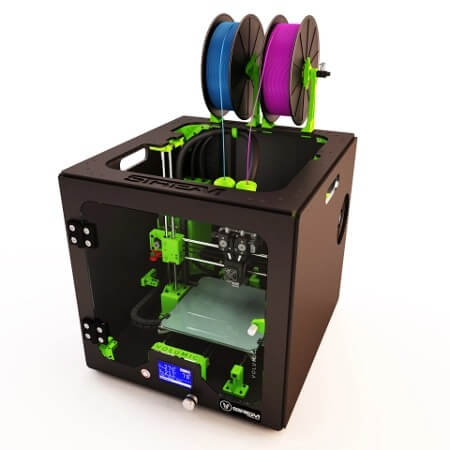 In this article, we will take you to all those parts by viewing the printer’s features, specifications, print quality, and whatnot. So, let’s start with the features.

There is a huge list of pointers mentioned on the right side of the printer’s pictures on the webpage dedicated to the printer on its manufacturer’s website.

On reading it completely you may find a bunch of features that you won’t in other printers when you are out there in the market looking to buy one.

Below mentioned are few features from that list which a printer falling in this price range should have.

We have explained to them in detail, why they are important and why should look out for them when you are comparing two different printers in the same or lower price range.

With that, we have also explained where these features come into play in terms of the FFF 3D printing technology on a whole, on which the printer 3D prints a part or functional prototype.

The Volumic Stream 30 Dual MK2 comes with an interchangeable print head. Those who know the areas in which the print head of any 3D printer is associated know how important its function is.

The print head is associated with the nozzle system which is connected with the extruder system as well as the rails of the printer which are responsible for moving the nozzle upwards after printing one layer of the part or functional prototype.

So, having two print heads, extremely useful during batch productions. When you are printing continuously, and have back to back printing laid on your printer.

You need to make sure all parts and functional prototypes of the printer are functioning up to the mark.

That’s when this print head can replace the already used print head during the post-processing of the part or functional prototype that you are 3D printing.

The touch control user interface has become already a mandatory feature to have in all modern printers.

Not only does it ease the operation of few functions on the printer, but also prevents humans from involving their hands in the printer, unless it’s necessary.

Keeping the same impression in mind, the manufacturer of this printer has also accommodated this important feature in their 3D printer.

Rigidity is a must to have in a desktop 3D printer wherein while the 3D printing process is going on inside the print chamber, you do not want the printer to vibrate and disturb the complete layer by layer printing procedure.

Aluminum chassis guarantees the printer to vibrate negligible during the printing procedure.

This feature makes the printer one of the most suitable ones in the list of desktop 3D printers for your home, or institute, or workplace.

Calibration of the print bed of the printer is one of the most important features in determining the level of accuracy one printer offers in the parts or functional prototypes that it is able to manufacture.

The company claims this printer comes with semi-automatic tray calibration which ensures the users that the post-processing of parts or functional prototypes that are manufactured would be easy and fast.

And if the user wishes to do batch production then too, he would be easily able to do it.

Those who are familiar with FDM 3D printing technology would know how important it is to have a cooling blower inside a closed desktop 3D printer.

After the printing procedure is completed, before you can actually take the part or functional prototype out, the temperature that has been accumulated inside the print chamber needs to be thrown out in the atmosphere so the balance is maintained.

And this is where the high power cooling blower of this printer is very helpful.

Having that in the printer would also mean that the post-processing of the part or functional prototype that you have manufactured would happen fastly.

If your filament runs out, you would be notified about it. The print procedure would stop, and you would be able to resume the work from the same place where you have stopped.

All this because of the filament sensor present inside the printer, the end of the filament would be detected and hence, not much time would be spent in getting to know what’s wrong and why has the printing stopped?

This feature of the printer will really decrease human intervention which comes against the precision and accuracy of manufacturing standards.

When the filament runs out, all you have to do is press the button which is present on the display screen on the touch screen interface and that’s it. 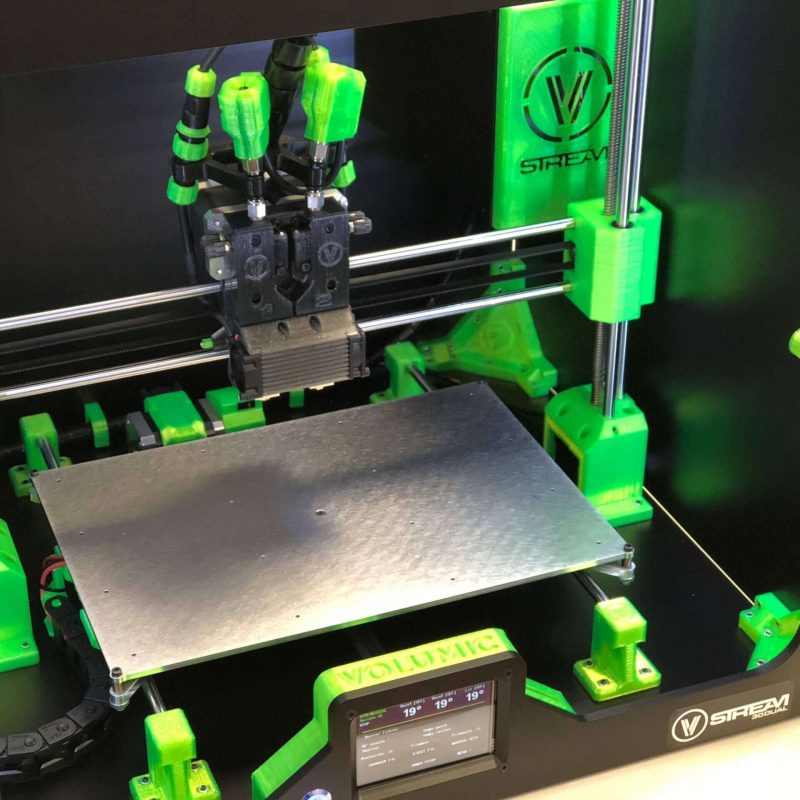 The Volumic Stream 30 Dual MK2 is based on Fused Deposition Melting 3D printing technology and allows its users to print using PLA, ABS, and other special filaments.

It has a nozzle diameter of 0.4 mm, while the layer thickness of parts or functional prototypes is 25.

The printer prints parts and functional prototypes with a print speed of 120 millimeters per second.

You can connect with the printer using a USB cable, SD-card, or a USB key. The print resolution range of this printer is 6 microns to 275 microns.

The 3D printer is tagged at a price of $6095. This may not seem like a cheap option. But it does bring with itself an array of amazing features clarifying why it ranges at this budget. 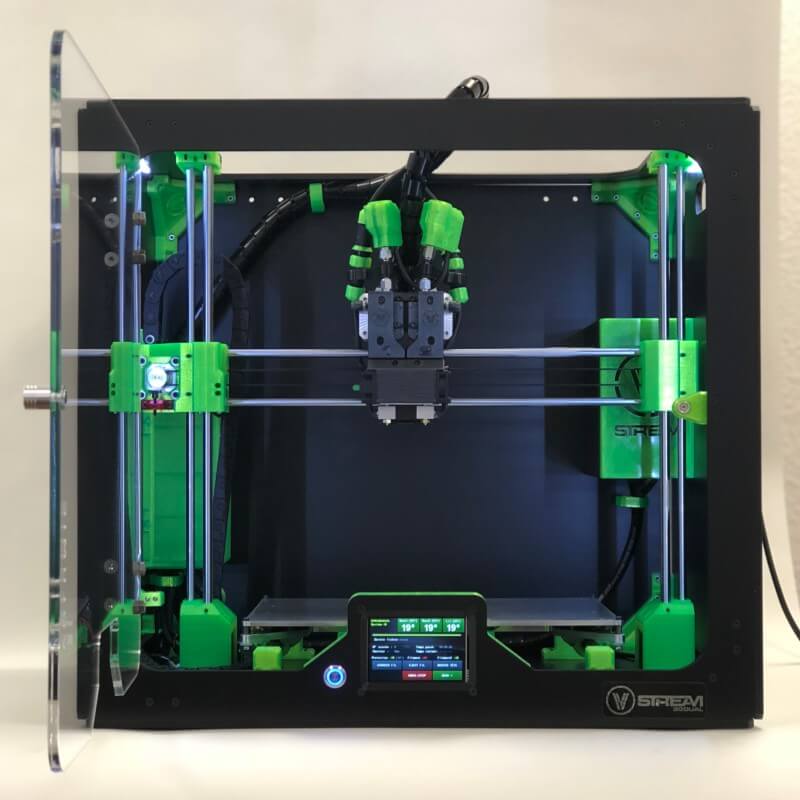 The printer looks like a cage, one that we typically see in a zoo. Because the front of the printer is built with a transparent material, you can look at the inside mechanism of the printer. It is cubical in shape.

In fact, there is an LED lighting to make sure everything that happens inside is, not visible to anyone because of the lack of lighting.

And each of the parts of the printer, be it the extruder, the touch screen interface, the rails, the print head, the nozzle system, and what not, zoomed in the pictures posted online on the webpage which is specially dedicated to this 3D printer.

The touch screen interface is located on the center bottom body of the printer.

The nozzle system of the printer is connected with rails to enable it to move upwards, against the gravity after printing one layer of the part or functional prototype.

The pack in which this printer comes includes a USB cable that will help you connect different devices to the printer and a power supply to fuel the printer with its electricity.

There is a PrintAfix lake included in the printer with a complete set of tools that you would need to adjust parts of the printer before starting to print with the printer.

Also, complete documentation guiding you in the French language is all ready to explain to you about the various part of the printer and its functionality so you do not mess anything up while the 3D printing procedure starts.

There is an SD included with the software on which the company recommends you to run the printer.

There is a coil of Ultra PLA with q quick release hose reel. In addition, there is a purge filament, with a set of spare plate clamps.

As mentioned above the printer is claimed to having print using the FFF 3D printing technology.

Herein a heated nozzle ejects molten plastic, depositing it in thin layers, one on top of another, onto a print bed, eventually forming the 3D printed part.

In order to draw a particular pattern, the nozzle or the print bed move while plastic is being extruded.

Prior to printing, slicing software determines how to break a 3D digital model into layers that the printer is able to print. 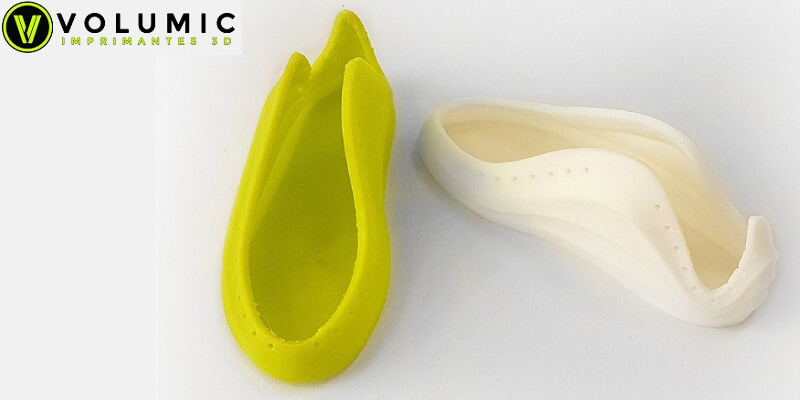 There are no photographs of parts or functional prototypes printed using the printer available on the website because of which all the assumption about the print quality of the printer is to be made from the layer resolution or the positioning accuracy information that is given to you in Specification part has to be made.

Simplify 3D, Verify 3D, Colorify 3D, and Repetier or Cura are the names of the software the company recommends you to start printing the printer with.

Apart from these names, the printer comes preconfigured with open-sourced 3D printing software which is compatible only with Windows operating systems.

The Support tab on the printer has size options starting from:

You can click the section in which you are looking for the support specifically and contact the company accordingly.

If you do not require Company Support specifically in the regions mentioned above, you can also click on the Contact tab which has three options i.e. Contact, Resellers, and Technical Support.

This is another way for you to avail of your Customer Service with the company.

Below mentioned, in brief, are the points which wish you to remember while comparing one printer with the other when you are out in the market and are buying.

3D Printer cost: Considering the price of competitors with the same features, this printer is on a higher end.

3D Print quality: There is no picture that is posted online, however, the printer offers layer resolution in every part and functional prototype that is printed using it.

3D Printer capability: The company itself manufactures filaments. As far as this printer is considered it is capable of printing with many filaments. And since it comes with dual extruders, you can use your creativity to manufacture parts and functional prototypes accordingly.

3D Printer Practicality: Obviously the printer manufactures parts and functional prototypes that find practical applications in many industries such as automotive, medical, etc.

The printer scores on points such as easy maintenance, self-lubricating bearings, interchangeable print heads, and no regular maintenance in the long-term.

But for the users who do not wish for long-term benefits, the price of the printer is a huge issue.

Especially when in the market there are desktop 3D printers available at a price that is much lower than that of this 3D printer.