Home » Guides » 3D Printing Tips: Do 3D Printers Use a Lot of Electricity

While 3D printing is a delightful little hobby, there’s no denying that it can also be rather costly. You can easily spend several hundred dollars simply to get started, between the printer and the plastic filaments.

Another recurrent cost that should not be overlooked is the cost of power used by a 3D printer. Precisely, it is worth looking for the answer to the question: Do 3D printers use a lot of electricity?

Whether you 3D print for fun or for a living, the amount of money you spend on power is something to consider. What does a 3D printer require in terms of electricity, and what can you do to keep your power bills low?

Do 3D Printers Use a Lot of Electricity?

From printer cost to the various other expenses, one invests when working with a 3D printer isn’t that easy to calculate. Unknowingly, people spend too much on these machines while ignoring the various ways they can save on their bills.

Here are some of the costs associated with 3D printers.

Depending on your level of 3D printing expertise, you’ll need to choose the proper printer to create the models or products you desire on a budget.

The price of a printer is determined by the size of the 3D printed products, the technology used, the amount of electricity used, and the printer’s make and model.

Other expenses may occur as a result of the necessity to upgrade your printer. When you run into problems like nozzle jams, this can happen. The printer cost, on the other hand, is a one-time expense.

The majority of 3D printers are designed to run for lengthy periods of time, such as eight or more hours each day. FDM 3D printers can run for up to two days, which means they can print continuously for more than 24 hours. 3D printers use 50 watts of power per hour on average.

As a result, given the nonstop nature of FDM printing operations, it adds up to a significant amount of power consumption. As a result, it may result in a large power bill.

Cost to Run a 3D Printer Per Hour

A 3D printer’s power consumption per kWh is mostly determined by its powered components. Fans, stepper motors, hot end nozzles for melting filament materials, and a heated build platform are some of the printer parts that demand a lot of electricity to operate.

The printer, its age, speed, material, and the 3D printing method used all have a role in deciding the power bill.

The amount of power consumed is determined by the type of 3D printer and the length of time spent printing. A 30A 12V printer, for example, consumes 360 watts, while most conventional printers consume 50 watts per hour.

The answers you need to know the limits of power consumption are in your 3D printer’s specs for the power source and maximum/minimum power ratings.

As an example, if a printer has a 30A 12V power source, it will have a maximum Watt of 360 (30*12=360), but the printer won’t always run at the upper limit. These maximums will appear when the appropriate pieces are heated to begin the printing process, but they will gradually decrease as the printing progresses.

Range of Electricity Use

The MakerBot Replicator+, which offers a voltage range of 100-240 volts and a current range of 0.43-0.76 amps, is an example of the minimum and maximum power levels a 3D printer can use. To convert this, simply multiply the lower and upper limits to obtain our limits.

By dividing the watts by 1000 and increasing the number of hours in use, we may convert the watts to kilowatts per hour (KwH). For instance, if you had a 5-hour print, the computation would be:

Still thinking – Do 3D printers use a lot of electricity? Well, let’s explore a little more in detail.

If you want to find out exactly how much power your 3D printer uses, the simplest method to do it is to use an electrical usage monitoring program. These tools serve as a bridge between your 3D printer and an electrical outlet, allowing you to accurately evaluate the volts, amperes, and wattage your printer requires.

Heating at the Hot End

The hot end of a 3D printer, specifically the section of the nozzle that melts the filament, is one of the most power-hungry components. The amount of power consumed by this operation is determined by the temperature you set it to, which is also determined by the type of filament you’re using.

If you use a lot of high-temperature filaments, like Nylon or ABS, you’re probably wasting a lot of electricity only on one portion.

Heating of the Print Bed

When calculating the power consumption of a heated bed, two elements must be considered: the temperature setting and the bed’s size.

The temperature is also affected by the type of filament you’re using. Your 3D printer determines the bed size. The larger the bed, the more energy is required to keep it at the desired temperature.

A 3D printer’s components can withstand temperatures of up to 200 degrees Celsius. They must also maintain that temperature, thus any heat losses to the environment must be offset by the heating element.

Another issue with high-temperature 3D printing is that a hotter nozzle and print bed will invariably result in larger heat losses. If you can reduce heat loss, you can save a lot of money on your energy bills.

In a 3D printer, there are two types of stepper motors: those that drive the extruder gears and those that control the nozzle movement.

Despite the fact that these motors are small and consume little power, they must operate continuously for the several hours it takes to complete a single 3D printing project.

The control board, or “brain,” of a 3D printer is made up of many electrical components that help manage the printer’s temperature, nozzle placement, extruder gear operation, and other minor functions. Despite the significance of its function, the control board consumes very little power.

The conclusion we can get from this short exercise is that the majority of the electricity consumed by a 3D printer is used to heat the nozzle and print the bed. While this is not surprising, it does provide us a hint as to how we might be able to lower the power usage of our 3D printing efforts.

There is no exact measurement we can provide you when it comes to electricity use because there are so many discrepancies and variables. The best way to determine how much power you’re using is to measure it yourself rather than relying on us to guess.

A power meter with an integrated power usage monitor is available for purchase. High-end ones can even compute the cost of your power usage, allowing them to quickly respond to your query.

What Consumes All the Power? 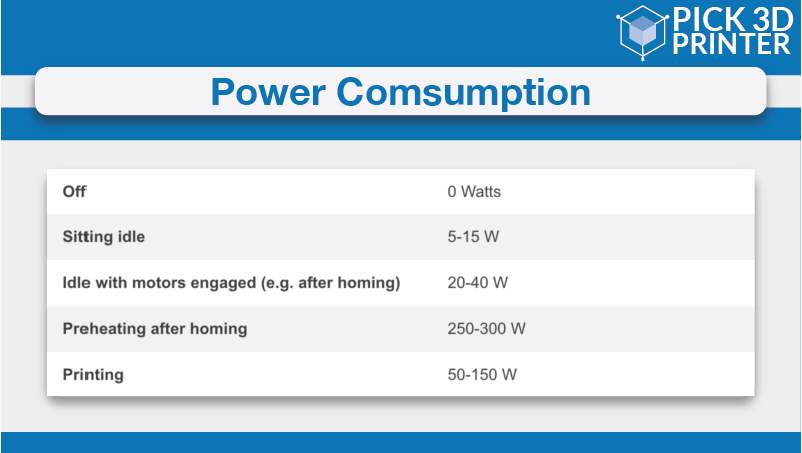 There are 6 major components that consume all the power:

The filament is melted by the hotend as it passes through the extruder. A heating element linked to a heat block heats it to the print temperature specified in the g-code file.

Until it reaches temperature and is shut off, that heating element consumes a large quantity of power (captured by the mainboard and power supply).

The majority of today’s 3D printers have a heated build plate. The build plate and the hotend are both heated in the same way.

When the heating element is turned on, it consumes a large amount of energy, although it is only utilised to heat the constructed plate to its initial temperature and then as needed to maintain it. It’s critical to match the build plate temperature to the filament requirements.

The mainboard is essentially the 3D printer’s brain. It’s in charge of everything from tracking the print to spinning the stepper motors’ gears. Despite the fact that it is the most important portion of the print, it consumes very little energy and can even be charged by USB.

The display consumes relatively little power and serves as the interface for controlling the 3D printer. It might be as simple as a regular LCD panel or as complex as a full-color touch screen that links directly to the mainboard.

On a 3D printer, there are at least four stepper motors. They’re in charge of moving the build plate along the X, Y, and Z axes, as well as feeding filament into the extruder. These motors normally take a couple of watts each, which isn’t much, but the 3D printer wouldn’t work without them.

On a 3D printer, there are usually at least three fans (not including the power supply). One fan cools the heat sink on the hotend to assist manage the nozzle temperature, another helps cool the filament while it’s being installed, and the last one helps keep the mainboard temperatures in check.

For each of these functions, some printers employ multiple fans. The fans are usually small and consume very little power, yet they have a significant impact on the printer’s overall performance.

How to Reduce Power Consumption?

Despite the fact that using a 3D printer is unlikely to add a significant amount to your power bill, many of you will likely appreciate any ideas on how to lower your power use.

The existence of a print bed enclosure can greatly lower a 3D printer’s power usage while printing. When printing with a filament that requires high temperatures for both the nozzle and the print bed, this becomes much more pronounced.

If you’re using a low-cost printer that doesn’t come with an enclosure, you can easily create one out of a couple of plastic sheets and wooden frames. There are numerous DIY 3D printer enclosure tutorials available online.

Time is a component that we haven’t discussed much, but it’s one of the most important in deciding how much power a 3D printer uses. If you can shorten your project’s printing time, you can save a lot of money on electricity.

There are various approaches to accomplishing this goal, but two are particularly effective: increasing printing speed and printing with thicker layers.

Experimenting with different filament materials is a natural part of 3D printing, but sticking to ones that demand extremely high printing temperatures can quickly add up.

Not only does this necessitate a hotter nozzle, but it also necessitates a hotter print bed. A temperature difference of 30 to 40 degrees Celsius may not seem like much, but every little bit counts – at least, depending on your point of view.

Most people find 3D printing to be entertaining and engaging, however, the expense of the printing cannot be overlooked. The initial cost of a 3D printer is a one-time expense, with subsequent costs such as printer consumables and electricity taking precedence.

Do 3D printers use a lot of electricity? Yes, they do, if not optimized wisely and used for unnecessary reasons. It is important that you turn off the printer when not in use and take every measure to save electricity.