Everyone with a 3D printer is familiar with the tricks and tips of 3D printing with PLA and ABS.

For the former, you know that it’s fairly strong, and also very brittle, so, you can’t leave parts out in the sun or anywhere that the temperature gets above 100°F.

For the latter you know it’s much more durable than the former, but parts 3D printing with the latter doesn’t have the strength of injection molded parts. Hence often aren’t strong enough for functional parts. But, what about 3D printing with Nylon, and that too on an Ender 3 3D printer?

Ender 3 Nylon is a combination that puzzles and confuses even experts in the field of 3D printing. So, here is an article to clear all your doubts out.

With a little bit of understanding, it is possible to successfully print Nylon on Ender 3. And this understanding involves knowledge of how Ender 3’s standard features and Nylon filaments pre-requisites. That’s it! So, let’s get started.

What Are The Standard Features of Ender 3? 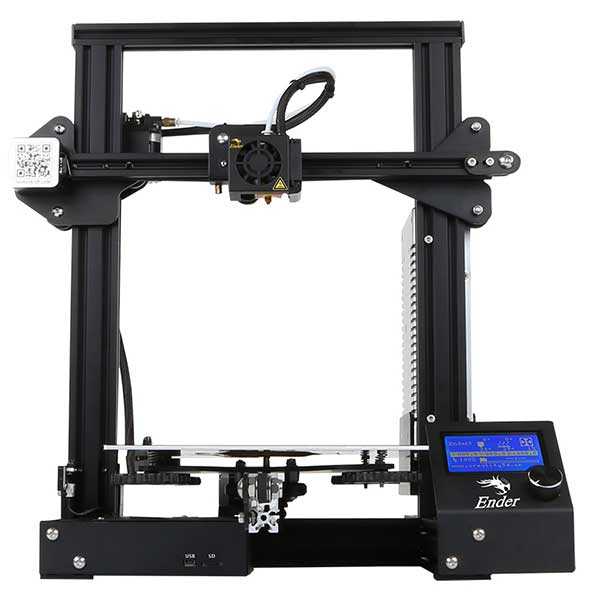 You; just as any other person having even a little bit of exposure to 3D printing might know that the Ender family of printers is very popular!

The Ender 3 is arguably one of the best printers under $200 right now specifically desired for its performance and versatility. Its two variants, the Pro and V2, both priced at under $300 have also received high praise.

Both of them being budget printers, their features are comparable to many high-end printers. Pro, as well as V2, are compatible with a wide range of material choices.

With some tweaks, it is possible to get many of the materials out there to work with your Ender. And in this article, we are focusing on Ender 3 Nylon combination.

These are the basic features that you need to know about Ender 3 Pro as well as V2. We will jump to the brief about Nylon thereby giving you the tips for successful Ender 3 Nylon 3D printing.

Nylon, chemically a.k.a. Polyamide is a popular material in the plastics industry. It is known for possessing toughness and flexibility.

Nylon filaments are hygroscopic, which means they readily absorb moisture from their surroundings. If this phenomenon of moisture-absorbing happens it does lead to several print quality issues, thus filament storage becomes very important and requires special attention.

How Do You Print Nylon in Ender 3?

Below mentioned are the points you need to take care of while printing Nylon on your Ender 3 Pro/V2.

Using an Enclosure to Prevent Warping

Some high-temperature Nylon filament brands are prone to warping because of the large temperature change between the extruded plastic and the surrounding environment.

Obviously, Ender 3’s heated bed can reduce the warping but that’s only to an extent. By using a heated chamber or enclosure on your Ender 3 would be the ideal solution.

It would keep the air around your part at a temperature of about 45 degrees Celsius thereby helping eliminate warping by reducing this temperature variation.

Ensure not to Have PTFE or PEEK Tubing

As mentioned above, some Ender 3s do come with hotends that use PEEK and PTFE which begin to break down above 240°C and will burn and emit noxious fumes.

For successfully printing with nylon filament, you’ll want the hotend to withstand at least 250°C. So, if you have an Ender 3 as such, upgrade it with an all-metal hot end in order to print at temperatures above 240°C (extrusion temperature).

We recommend you the one that experts favor i.e. the E3D V6 All-Metal HotEnd because they can easily reach up to 300°C. But before replacing your Ender 3’s hotend, ensure to print the correct mount to attach the E3D V6 hotend to it.

A Garolite, Glass, and PVA Glue for Good Adhesion

As is the case with any type of filament, so it is with Nylon. Not ensuring which can lead to making or breaking between warping and successful 3D printing.

Experts recommendation for nylon is Garolite sheets and Glass plates. These are the two most favored build surfaces that are known to produce the most consistently successful results.

With the addition of a PVA glue stick, Garolite, as well as Glass, can provide the bed adhesion necessary to bind prints to the build surface for a smooth 3D printing experience.

As mentioned above, Ender V2 comes with a textured glass bed so that will do while printing with Nylon. But in case you have Ender Pro check with the build surface before 3D printing Nylon to ensure you do not face any issues with bed adhesion or removal of the part.

LayerLock Garolite Build Surface is made out of fiberglass linen cloth laminated with epoxy resin. Because of this inherent manufacturing quality, it is known to have high stability over temperature which lets it withstand the 60°C, a recommended temperature for successful nylon bed adhesion on a heated bed.

Another perk of using this material for the bed surface is its adhesion quality that lasts for thousands of prints with sandpaper.

Moreover, using a sheet of 220 grit sandpaper that can lightly sand down the top of the Garolite can not only remove any blemishes but also reveal a more textured and even surface.

This allows Nylon to achieve a better grip on the bed beneath it, especially for a successful flat first layer, thereby leading to a successful nylon 3D print overall for years to come.

Drying the Filament Before Using It

As mentioned above, Nylon is hygroscopic, meaning it readily absorbs water from the air. By testing, Nylon is known to absorb more than 10% of its weight in water in the time duration of fewer than 24 hours. Because of this nature, it is recommended to not Nylon filaments out in the open.

In scenarios wherein you are 3D printing with nylon filament that isn’t dry, the water in that filament will explode causing air bubbles during the 3D printing process that will prevent good layer adhesion, greatly weakens the part, and ruins the surface finish.

This will remain true in the cases wherein you are using the best bed surface for adhesion.

Desiccant is known to help the filament stay dry, but even packets of it are nowhere near enough to actually extract the moisture from Nylon.

After this drying procedure is completed, either immediately start printing it on your Ender 3 in a room that isn’t cold or drafty, or store it in an airtight container with desiccant to use for later.

Ender 3s with PTFE tubing and the bed surface are probably the only two major parts that you need to manage wisely before printing with Nylon filament.

Ender 3 Nylon 3D printing is not that hard to carry out, it’s just these little tips that are mentioned above that you need to take care of. Otherwise, it does have a hot metal end that can withstand the temperature needed for Nylon 3D printing.

Also, the heated bed is suitable to resist the needed temperature. One particular care needs to be taken while drying the filament but that stands for all the 3D printers and not just Ender 3.

But with that covered, you are all good to go. So, start 3D printing with Nylon and create some of the most wonderful geometries that the world is yet to witness!