Landing onto EOS’s website is like seeing a piece of a ten-second video of a science fiction movie.

Yes! There is a video going in the background of “Shaping the Future of manufacturing 3D Printing Solutions for your production,” which starts with a dark background which, you later realize, is sand.

Suddenly in a specific part of the sand looks as if bullets are getting fired.

Like, volcano, there is a sand explosion, and all you get is not a dead body or something else, but a generation of part!

Seven tabs placed on the top right corner of the website are not all!

Six more tabs are placed beneath these seven tabs somewhere on the center screen.

The website is available not only in the English language but also in languages whose abbreviations are DE and CN.

For reaching the webpage of EOS M100 you have to navigate through the Products and Services tab’s Additive Manufacturing Metals, to EOS Metal Systems, then you will be able to notice EOS M100. 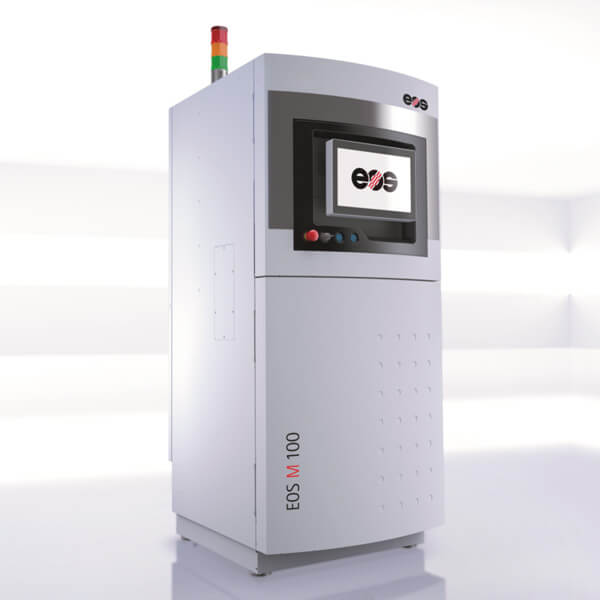 So, overall while navigating through all this should tell you two things about the manufacturer’s website:

Under the Additive Manufacturing Metals option, you have EOS Metal Systems as well as EOS Metal Materials.

Which means the manufacturer also supplies you with the 3D printing materials.

Apart from this, there are “Software Solutions,” “Service and Consulting,” and “Getting Your Parts Manufactured.”

Remember 3D printing services provider websites? EOS does that too. And now speaking about the printer EOS M100.

There is a decent picture of the machine, which acquires the complete center screen of the device from which you are operating on the website.

The machine at first sight, for anyone new to 3D printing, is going to look like a refrigerator.

By now, at least one thing should be clear about this machine i.e. it 3D prints metals.

It makes us wonder why, on their websites, the website makers, keep a down arrow on webpages!

Are they really under some kind of a fear that someone would be so much in haste that he or she would, navigate to some other webpage without scrolling down and thinking that the webpage only has that much which appears on their screen at that moment of time and nothing more?

Anyways! When you scroll down, you get to encounter three features of this machine:

And because you have scrolled down completely enough, there is a lady’s face that appears and she is trying to do something with the machine.

Scrolling down even further, you notice there is a video of her showing how to keep things inside the machine and close the door, only after pressing the lever.

Moving further down you have three specifics about this machine i.e. Laser Power, Build Space and Accessories.

And then there is a lot of Technical Data which we will mention in the specifications section next.

There is a quote from Boston Scientific about EOS M 100 by some Michael Keane who is Head of Technical Process Development in which ease of use, reducing setup times, increasing productivity and improved ergonomics as well as ensuring safety for machine operators are some of the features that are mentioned about this printer.

So, this printer is also using one amongst them for 3D printing of metal, but which one?

Is something you need to find out yourself because it is not mentioned on their website or if it is, we might have not stumbled on that topic.

In any of these 3D printing technologies, the laser is used to cure or to solidify the layers which are on the print bed.

EOS M 100 boasts of using the power stability of a 200-watt fiber laser that according to the company, ensures optimal and consistent processing.

Highly complex parts with delicacy can be 3D printed using this laser power.

Cost-efficient production in small quantities is something that the company claims it printer does.

Although having a small build space, the printer can build on around a construction platform of 100 mm in diameter.

This is a nice hint that the company gives in terms of the build space to all those who are willing to subscribe to it are the only ones who should think of buying the printer.

The EOS M 100 is equipped with a modular structure because if which post-processing and cleaning and setting up the printer does not take as much time as it does in other printers.

So, the overall print time for producing a product decreases.

There is also a powder bed container present inside the printer, because of which, it is very easy to switch and maintain and quickly perform tasks on the printer.

For all of you who are interested a lot in the technical data, there is also an option of downloading the fact sheet pdf about the printer.

For all those who want to stay limited with the technicality that the company believes you should be exposed to, here is the thing.

The laser type used by EOS M 100 for curing the 3D printed part is Yb-fiber laser.

Now you know that the lighting that you saw in the video about which it is mentioned at the start of this article, was a laser and there was no bullet-firing happening anywhere.

Instead, the Laser was curing or solidifying the part!

The precision optics used by this printer is the F-theta lens; a high-speed scanner that scans at a speed of up to seven meters per second.

The maximum power consumption of this printer is 1.7 kilowatts whereas the average is 0.6 kilowatts.

The compressed air supply system has a maximum pressure of 4000hPa, 50 I/min.

The minimum recommended installation space by the company is one meter * three meters * 2.5 meters. It weighs 580 kilograms.

You will have to “request a quote,” to get the price of this printer.

Writing “EOS M 100 price” on google would give you the price of Canon EOS M 100 so, beware and clear in your mind, whether it is the camera that you wish to buy or the 3D printer.

There is a link that leads to the All3DP website wherein information about How much does a metal 3D printer cost in 2020? is mentioned.

This did pop up in our Google search when you type down “EOS M100 3D printer price,” opening which we were able to find this 3D printer listed for $350,000.

However, it is better to ask for a quote by filling the form on the manufacturer’s website if you are genuinely interested in purchasing the printer.

Like we stated in the earlier part of this article, the 3D printer looks like a refrigerator to people who haven’t had much experience with looking at industrial 3D printers.

There is a video of EOS 100 that takes us through various ends of the machine and name its features.

There is a filled powder supply bin that goes into the head part of the machine, as shown in the video.

The duty of which, looks from the name of this part, is to supply with powder material whenever needed.

On the left of the print, you have a mechanism that is going to recoat the metal.

After one layer is printed, it will lower, and then the second layer would be printed.

There are four button type structures that are just beneath the touch screen interface.

In the video, you are also shown how a vacuum is then used after a part is completely 3D printed.

It sucks up the remaining unprocessed part, successfully letting you fastly start another 3D printing process.

The video does not show any information about what is actually present in the tail part of this machine, so we can assume, it might have to deal with the lasers that are used for curing.

All you have to do is read the manual before starting to 3D print and contact the company if you need any assistance with the 3D printer.

As discussed in the earlier part of the article, one of three 3D printing techniques is utilized by this 3D printer for making parts and functional prototypes.

It uses a laser for the curing of layers of parts or functional prototypes.

And one thing we can surely comment on is, the printing cost of this printer is going to be higher than other FDM 3D printers of the same grade because all of these 3D printing techniques claim to generate parts and functional prototypes with more accuracy and hence more infill, lesser layer resolution than FDM. 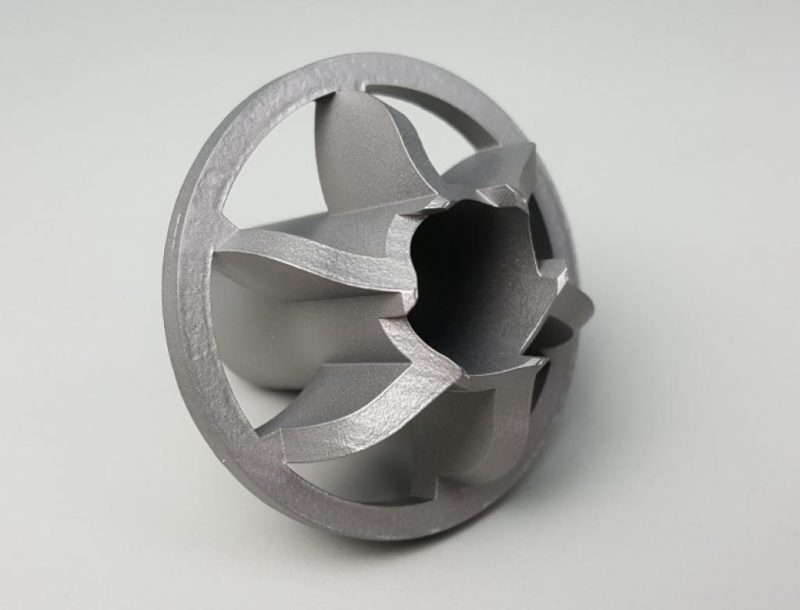 EOS 3D Print2 is the name of the software that EOS recommends to be used with this 3D printer.

A tab called Customer Center is present on the website, which when you click on you get to know that there is something called Digital Support called EOS Customer Portal is something offered by the company as a solution to all its customer’s problems.

A quick recap of what we have been talking about in this article.

3D Printer Cost: Needed to be asked to the company.

3D Print Speed: Not so good, not so bad.

3D Printer Capability: There are three metals listed on the company’s website from which the 3D printer is able to 3D print parts and functional prototypes.

3D Printer Practicality: Can be used for the production of medical industry related parts with ease.

3D Printer User Expectations: It is an industrial-grade printer, hence meant for that class of individuals.

EOS’s website has too much taken from in terms of learning about 3D printing, about their printers, printing material, and even specify if you wish to print from their printers, without buying them!

So, even if you do not wish to plan to buy the machine, it would have something interesting for you to check out if you are just a 3D printing lover.