If you are planning to get into the field of 3D printing and want to learn how this technology can print closest to your imagination, X1 can be your budget-friendly, easy-to-use 3D printer.

Upgraded with advanced extruder technology, Labists X1 offers a build volume of 100 mm * 100 mm * 100 mm. It comes with a flexible build plate that ...
Add to wishlistAdded to wishlistRemoved from wishlist 0
Add to compare
Check Price
Labists

Here is a lesser-known but equally effective entry-level 3D printer based on FDM 3D printing technology. Labists, like other 3D printing companies, do not have a huge range of 3D printer offerings.

It is popularly known for its product named Raspberry Pi Camera. The Camera provides its user a real-time monitoring facility of the 3D printing process. Labists also provide you with 3D printer filaments. 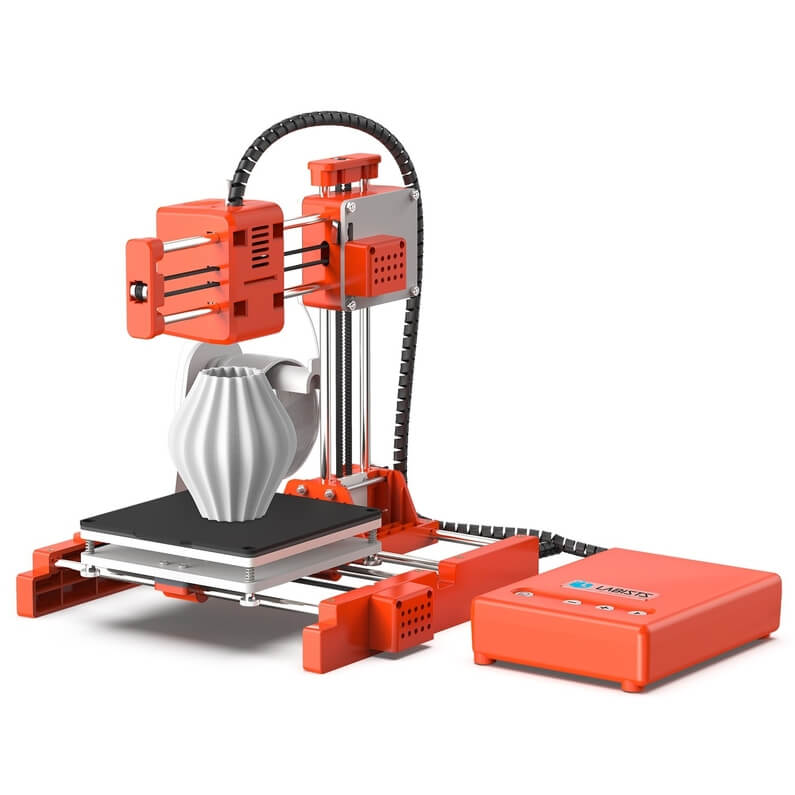 Having stated so, X1 is no less than a phenomenon. It can easily compete with all the well-known brands in this niche because of its wonderful features and construction.

There are many things to appreciate about X1 and this article is meant to take you through each one of them in detail.

Once you get to know what makes this printer very functional, it’ll become easy for you to compare it with others in a similar price range and decide which one to buy for your own use.

So, let’s get started with exploring various aspects of this amazing entry-level 3D printer by a lesser-known brand of 3D printer Labists.

One thing is for sure, the company stands true to their name i.e. Labists. Otherwise, they couldn’t have devised such a useful device in a compact space. X1 is an open body 3D printer that occupies a little of your desk space, that’s it.

By occupying such a little area, the printer lets you print some of the most useful parts that you can put into various applications. Let’s look at the features that differentiate it from other printers in the same price range.

X1 has an upgraded extruder that reduces plugging risk and bad extrusions to a greater extent. This makes it possible for fast heating of 3D printer filament to its glass transition and hence reducing the overall print time.

So, if you have printing projects wherein you need to print a lot many parts, you can do that in almost no time.

Also, the printer offers to you to print a maximum build volume of 100 mm * 100 mm * 100 mm. Added to it is the flexible build plate that offers you the overall flexibility of printing.

Labists X1 comes with several assembled parts thereby not giving you many difficulties with the complete assembly. According to the claims by the company, it will only take 30 minutes to finish up assembling the printer.

Moreover, the printer is light in weight which will let you easily transfer it from one place to the other.

The printer manufacturer has made it out of high-quality ABS material which is regarded as a high strength delivering, stable material.

Often a problem with entry-level 3D printers is that they produce a lot of noise. But Labists have taken this point into account and made sure that their printer is not just like any other open body entry-level FDM 3D printer. And for ensuring this, they have equipped the printer with three silent motors that control the printer’s X Y, and Z-axis movements.

Thereby making the complete printing process happen smoothly and quietly! So, if you are going to use the printer for home use or for learning, X1 is extremely recommended because it would not make much noise.

The maximum power consumption utilized by Labists X1 is 30 Watts which is lower than the standard one.

Even after consuming such a low power supply, the printer gives no hiccups while 3D printing and can reach 180 degrees Celsius within only 3 minutes. X1 is also compatible with Cura, Repetier, and other open-source software. Pretty flexible, yeah?

X1 features a professional aluminum nozzle with an improved extruder that is able to provide a high amount of accuracy in printed parts.

Being an FDM 3D printer of low budget, might have given you an impression of a printer that will not be able to satisfy you with accuracy, yeah?

But make no such assumptions as the printer can make small parts with intricacies easily using the correct support structures.

Also to ease the process of removing an already 3D printed part, the printer manufacturer has provided you with a removable magnetic plate inside the printer.

This will facilitate the process of removing an already 3D-printed part. You will be able to scalp it by taking the part to another desk and post-process it easily.

Also bending the plate would simply drop the object or pop-off. This is another way in which the printer can be termed pretty flexible for you.

X1 comes with two slicing software named LABSLICER and Cura. The latter is something that you already might know if you are a little bit familiar with 3D printing as it is open-source software.

Both of these softwares are loaded on the SD card that comes with the printer. It will take you somewhere around one second to switch from STL to G-code, that’s how fast the transformation would be.

To facilitate your interaction with LABSLICER, Labists have uploaded tutorials on their website. So, if you need to alter any settings and do not know which menu bar to click on, don’t worry.

As far as Cura is concerned you might know that is already a recommended best slicer for open source 3D printers. It is renowned in the field of being completely friendly even for people with a non-technical background.

Labists have also created video tutorials that will help you dealing with Cura software on an X1 printer.

As you know that most of the 3D printing is dependent on the 3D sliced file, so by paying a good amount of attention to this part, Labists have secured the quality of parts that can be manufactured on X1. 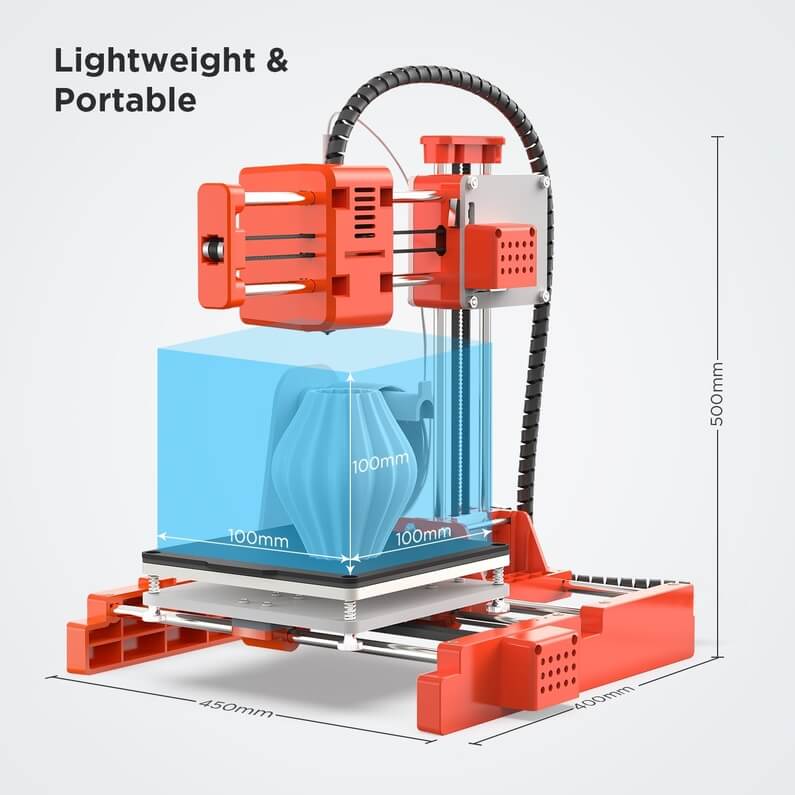 X1 operates on the basis of FDM i.e. Fused Deposition Modeling 3D printing technology. The maximum build volume that you can create using the printer is 100 mm * 100 mm * 100 mm.

It uses a single nozzle of diameter 0.4 mm. Parts printed using the printer are known to have layer thickness ranging from 0.05 mm to 0.2 mm. PLA diameters of filament 1.75 mm are compatible with X1 3D printer.

Elegoo’s compact open body FDM 3D printer’s extruder is capable of withstanding 180 degrees Celsius temperature. It can give you a printing accuracy anywhere between 0.1 to 0.2 mm.

The printer is capable of printing with a speed ranging anywhere from 10 to 40 millimeters per second. X1 lets you connect with a TF card as well as a USB cable. You need to manually level the print bed of the printer before starting the printing process.

X1 consumes 12 Volts Voltage and 30 Watts power. It has a construction platform that is removable and does not require any hotbed as it offers printing only with PLA 3D printer filaments.

You can buy a Labists X1 3D printer at a jaw-dropping price of under $150. 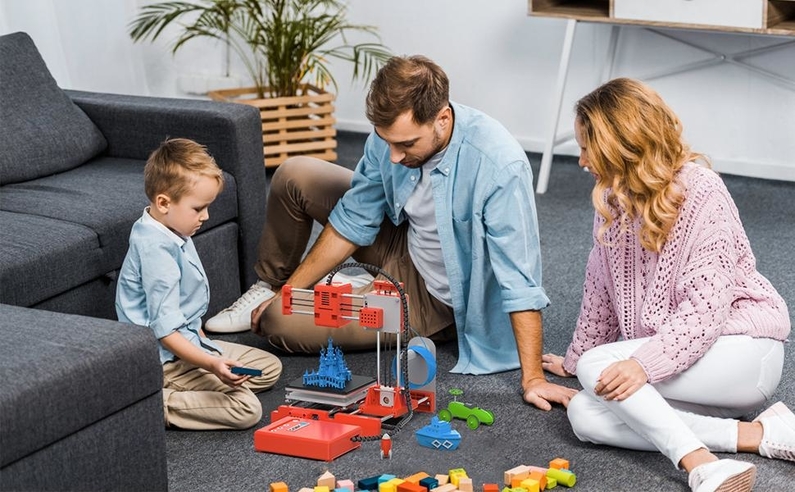 It’s not like any typical Cartesian construction starring 3D printers. Instead, X1 has its own style. It’s even more open than a regular Cartesian 3D printer you would have come across.

The printer has an open gantry with not much support, but just that much which is actually needed for a printer like it.

On this, supports sits a removable build plate. And the back of the gantry supports one pillar which stands and carries the print head of the printer.

It’s supported with rails that allow the print head to move up and down after the printing of different layers of the part that you are wishing to print.

A nozzle system is connected with the extruder of the printer which is connected to the print spool that allows you to fix PLA 3D printer filaments in it.

Overall, the construction is even simpler than the simplest one you’d have ever come across.

FDM 3D printing is the easiest 3D printing technology to make sense of and that’s what X1 uses for 3D printing a part or functional prototype.

It makes use of solid filament, the temperature of which is given a rise till it reaches the glass transition. After which it is allowed and get collected in the tubing system.

Meanwhile, according to the geometry, the print head has reached a certain point near the print bed.

And then the filament is permitted to flow on it thereby depositing a layer of PLA on the build platform according to the geometry required. One after the other, the layers are deposited over each other, making a complete part.

Once that is done, the part is allowed to cool down and then taken for post-processing.

Generally, printing cost per part is dependent on the geometry of that part, the type of 3D printer filament used for printing it, the cost of that filament, the number of supports required in the part, the curing process, etc.

But, it can be said that the cost of printing per part using an FDM 3D printer is the least when compared to other 3D printing technologies. 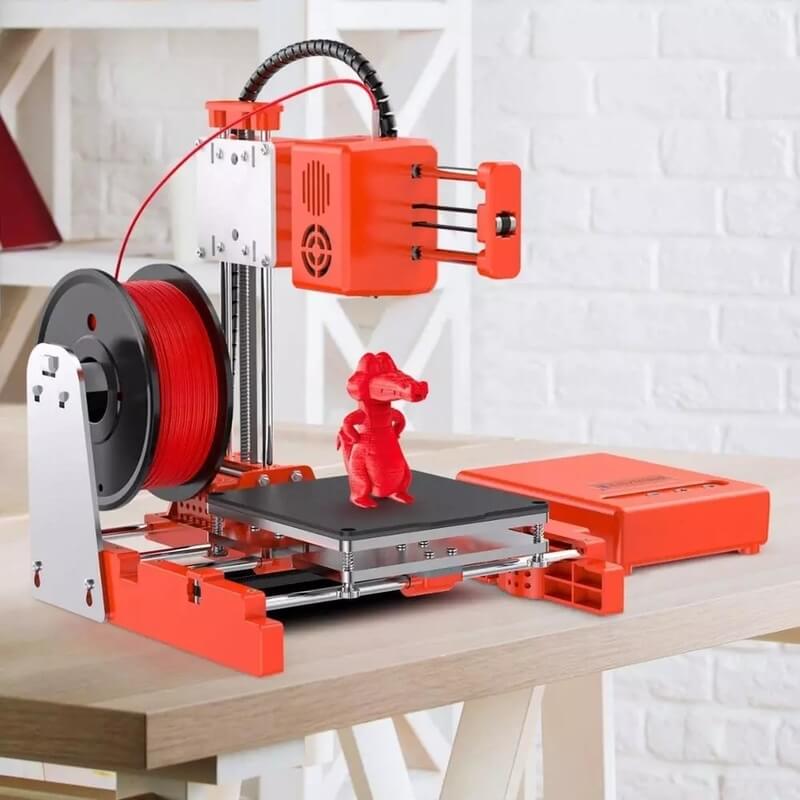 Like any other entry-level FDM 3D printer falling in the same price range, X1’s print quality is also average. You can prepare gifts for kids using the printer.

Thanks to the printer manufacturer’s idea of featuring a professional aluminum nozzle in the printer that allows you to get high accuracy. Due to this, you can easily print objects with layer resolution ranging anywhere between 0.05 mm to 0.2 mm.

As mentioned in the features section of the article, the printer comes compatible with two software:

There are video tutorials available to make you comfortable with both of them on the official website of Labists. They are extremely easy-to-use slicers that convert .stl file in G-codes within seconds.

Labists is known to offer the answer to all the frequently asked questions online. So you search whether you have a similar question to the one that’s mentioned over there, your doubt will be then and there cleared out.

Below mentioned are some factors that represent the summary of the main points concerning X1.

3D Printer Cost: $150 is an extremely affordable cost for an efficient 3D printer like X1.

3D Printer Capability: Although the printer is capable of printing only with PLA, it lets you remove objects smoothly and is very flexible.

3D Printer Practicality: X1 does not make much noise.

If you are planning to get into the field of 3D printing and want to learn how this technology can print closest to your imagination, X1 can be your budget-friendly, easy-to-use 3D printer.

It is a very simple printer to work with and can help teach students as well. The printer has excellent features, which other printers of the same price range do not offer.

So, if you are thinking to buy one 3D printer that can sit compactly on your desk, and help you produce some gifts for your kids while assist you to learn 3D printing, choose X1.