When it comes to producing 3D printed parts and functional prototypes of high quality, no other technology guarantees you as much as Material Jetting 3D Printing.

Many complex objects that have been created with this technology are dimensionally accurate and possess a smooth surface finish.

This technology that was introduced to the world in the 1990s has the ability for producing a full-color visual prototype, injection molds as well as casting patterns.

It is a natural tendency of people to have a prejudice about technology that prints accurately consumes more time than others.

But this is not the case with Material Jetting 3D printing technology. It utilizes the same or even lesser print time when compared to other technologies for creating objects of equal geometry.

This technology is able to do so by using liquid photopolymer droplets that are cured using UV light.

Before the parts are cured, the photopolymer resin is sprayed in the form of droplets. This is the reason why the mechanism of Material Jetting is also compared to the 2D inkjet process.

But it should be noted how inkjet printers deposit only one layer of ink droplets, whereas in material jetting it’s layer after the other until the complete part is printed.

In terms of the source used for curing parts or functional prototypes, MJ is similar to SLA. The difference however is in the method of spraying.

If you have seen SLA 3D printers, they hold an entire vat of resin which is then, selectively cured by a laser source. Whereas in MJ 3D printers; hundreds of tiny droplets are sprayed at the same time.

Now that you have enough introduction about this technology let’s jump right into the way in which the technology can print parts.

How is Working of Material Jetting Technology?

Apart from the aspect mentioned in the last paragraph of the previous section, there is another aspect that makes this technology unique from others.

This aspect deals with the manner in which the 3D printing material is deposited. Most 3D printing technologies, be it FDM, SLA, or SLS deposits, cures, and sinters material in a point-wise fashion.

Whereas, in material jetting 3D printing technology the resin is jetted from more than one print head along with the X-axis carrier. The duty of this carrier is to sweep back and forth across the point of evolution.

For helping you to better imagine this situation, we ask you to think of a light source present in a 2D scanner or a windshield wiper of a car.

This detailed deposition procedure of the technology is believed to be a very strong reason why MJ prints in a faster and more accurate manner than any other 3D printing technologies.

The main components of an MJ 3D printer are print heads, UV light source, build platform, and a material container. Both, the print head as well as the light sources are suspended along the X-axis carriage.

After having looked at the process which happens inside an MJ 3D printer, let’s look at the pros and cons of Material Jetting 3D printing. 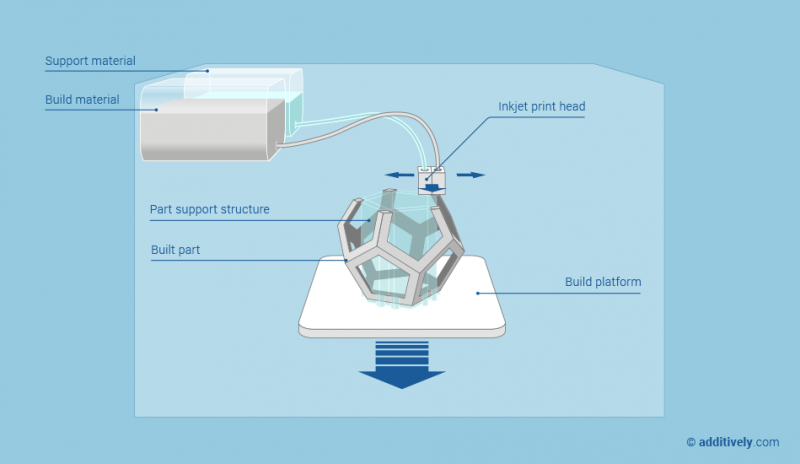 What are the Applications of Material Jetting in 3D Printing? 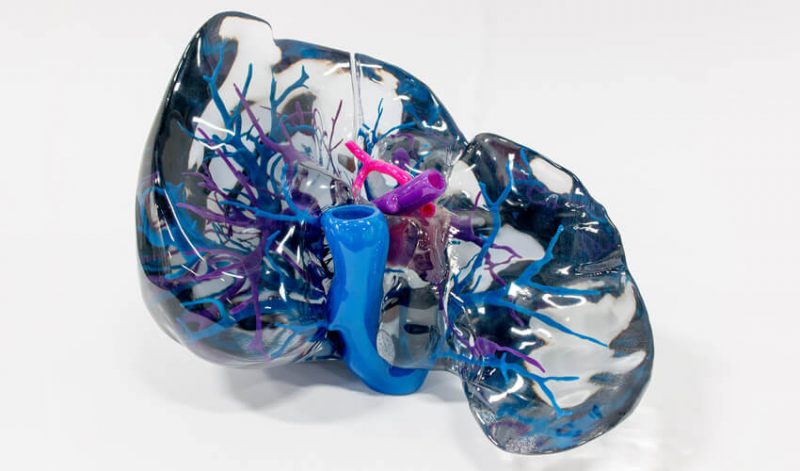 As we have hinted in the previous section as well as other parts of this article, MJ 3D printing is mainly used for producing beautiful and real looking prototypes.

So, say if you are a doctor who needs to explain to his or her student about some body part. You can employ this 3D printing technology for printing accurate body parts.

And then that model can generate an accurate picture in the mind of your student about the actual body part.

The same example applies to you if you are an architect, designer, or artist. All of these professional benefits way too much because of the precision is shown by this 3D printing technology.

Another example that can be given relevant to this topic is of Audi Pre-Series Centre. They created some completely functional and multi-material prototypes for speeding up the design verification process of their car using Stratasys’ printers based on material jetting.

Because of the great level of detailing and temperature stability in material jetting technology, it can be utilized for making low-run injection molds.

This 3D printing technology makes possible tooling for injection molding and investment casting in a much faster and cheaper way than what is currently done.

Despite faster printing, the technology does not compromise on achieving a higher level of complexity that is impossible by other technologies.

Material Jetting is used in making 3D printed electronic devices. An illustration of the same is given by Nano Dimension’s 3D printer named Dragon Fly 2020 Pro.

To date, the best use of Material Jetting 3D printing technology has been found in the medical field for making full-color anatomical models.

Not only do these models help medical students have a better learning experience, but also they allow surgeons to plan and execute their surgery more efficiently than ever.

What Materials are Used for MJ 3D Printing? 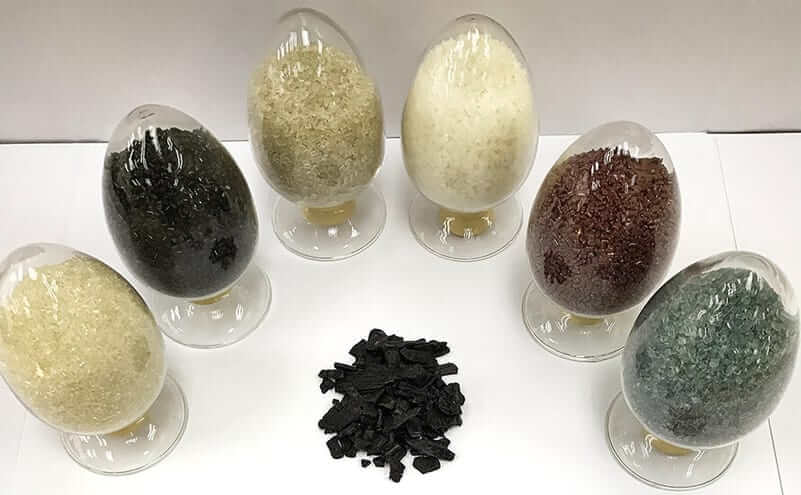 Stratasys and 3D Systems offer a range of photo-curable plastics as well as composites. The two topmost used material for 3D printing are photopolymers and casting wax.

Stratasys is known in the market for offering its range of digital materials. The materials offered in this range can be combined with two or more photopolymers to create a hybrid range of properties.

Currently, the ongoing research is in the segment that aims to make metals, ceramics, as well as silicones with this technology.

A variation of this technology i.e. the Nanoparticle Jetting technology is developed by a company called Xjet that allows 3D printing with metals and ceramics.

The suspended ceramic or metal particles, created during liquid formation, are then removed during sintering. Another noteworthy contribution is given by a company called ACEO.

This company has invented the technology for printing with Silicon material. ACEO is a division of the German company called Wacker Chemie AG, a chemical giant. 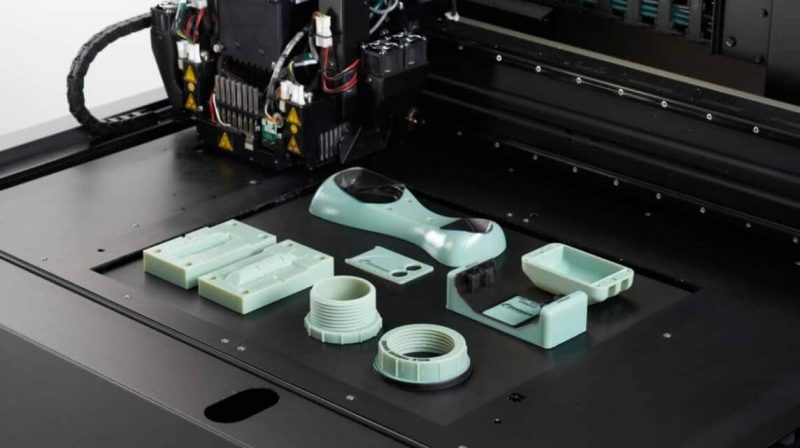 As mentioned above, Stratasys and 3D Systems are two main companies that manufacture 3D printers based on this technology.

The Projet series by 3D Systems is one of the most sophisticated 3D printing systems you can get yourself based on Material Jetting. It can create parts with multi-materials and full-color.

Stating about Stratasys, it is the J750 3D printer that comes with a decent build volume. Claims are that this 3D printer allows you to print with six different materials at the same time! Just Imagine! How multifunctional 3D printing can get!

As you would have realized Material Jetting 3D printing technology is preferred by experts all over the world when they wish to have high-quality prototypes. But not much for functional purposes, the technology primarily opts for the aesthetics it brings to the table.

It is known for producing some of the finest surface finishes and layer resolution range the world has ever seen when it comes to 3D printing. This is because of its drop-on-demand technology.

Further research is still on in this technology to make this technology compatible with more and more 3D printing materials. But till then too, the technology remains a very promising one for bioprinting, regenerative medicine, as well as tissue engineering.