Roboze Argo 500 is based on FDM 3D printing technology that's capable of printing with various materials, the list of which some solid materials that make part or functional prototype printed on Roboze Argo 500 act as metal replacements.

Capable of a controlled printing environment, Roboze Argo 500 can reach up to 180 degrees Celsius allowing you to process polymers and composite ...
Add to wishlistAdded to wishlistRemoved from wishlist 0
Add to compare
Check Price
Roboze

The name of the founder of Roboze is Alessio Lorusso, listed by Forbes 30 under 30. With a team of professional visionaries in the field of 3D printing, Lorusso founded Roboze in 2013 for challenging the global design standards.

The main advantage of the company, as claimed by the company, is its R & D investment not only in the field of material engineering but also in new technologies and providing industrial services.

The company’s beltless patented system guarantees high-performance solutions across the board.

In this article, we are going to share various aspects of the Roboze Argo 500. Its features, specifications, claims made by the company about the printer, print quality, and a lot more.

The attempt would be to cover every aspect of this printer, so, if you are out there to purchase a printer, this, maybe some other, you can get factors of comparison.

The desktop solutions, as per the claims on its website, are designed for professionals and companies for functional prototyping with composites and high-temperature polymers.

The desktop/production solutions introduce the world of production of finished components and metal replacement parts to the needs of the manufacturing industry.

Having given an overview of the company, let’s start with Roboze Argo 500’s features and its explanation. 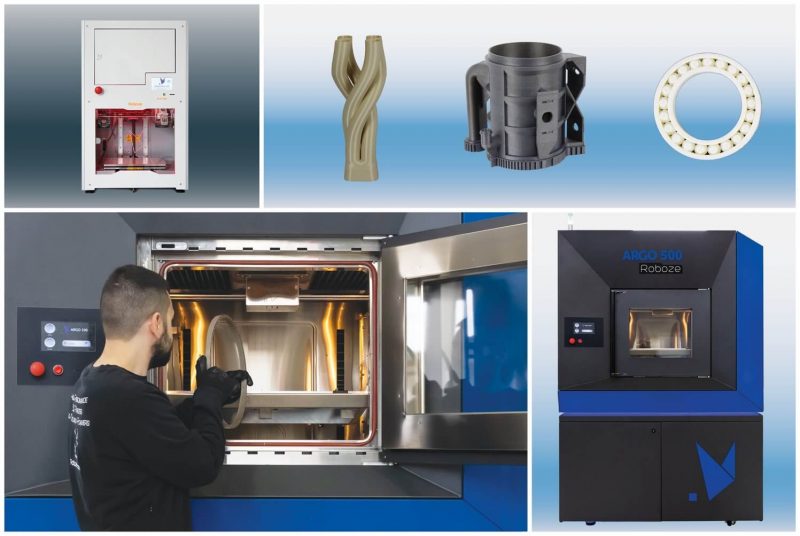 As soon as you start scrolling down that image, the claims about features of the printer appear on your screen with a relevant image, alternatively present on the right or left of its text. The first one amongst those text/claims/features is:

In the relevant picture next to the text, a man is; either trying to take out a 3D printed part from the print bed of the printer or put it in.

The door of the print bed is open. By the claim, the company is trying to convey to readers how Roboze Argo 500’s extruder can withstand up to four hundred fifty degrees Celsius.

If anyone reading this knows a little bit about FFF 3D printing technology, probably knows how crucial is this feature to any printer operating on that technology.

For those who don’t, we’d like to state: extruder is the container in which the melting of the raw material is likely to take place, so the more temperature it can withstand, the chances are, the more high viscosity polymers it can print.

The other claim is about the heated chamber. Roboze Argo 500’s heating chamber can reach 356 degrees Celsius.

Reaching this temperature is necessary if you wish to process super polymers and composite materials.

Also, the heating chamber is capable of pre-heating the material with which you are willing to print.

Doing so reduces the overall printing time and increases productivity compared to other systems in the same price range.

The picture posted right next to this claim is seeming like a turbine’s fan’s wing. And if you were wondering why the company prefixed Argo with “500,” you will get to know in a while.

Taking care of the accuracy of these large-scale parts that the company endeavors to print on such a huge print bed is its patented X and Y mechatronic movements.

The company goes into writing how Roboze 3D printers have the most accurate FFF 3D printing system that lets them manufacture with mechanical repeatability and high precision for the production of small batches and on-demand products.

Fulfilling the company’s aim of guaranteeing the perfect adhesion of parts and build plate is the Argo 500’s efficient vacuum system that not only simplifies and speeds up the printer’s 3D printing operations but also guarantees the planarity of the printed component even in case of larger prints.

For ensuring the build plate leveling is accurate, Argo 500 has a system to auto-level its build plate.

Calibrating the part position in the Argo 500 happens automatically for producing repeatable accuracy in each print.

By eliminating the need for external user intervention during its calibration phase, the company has reduced the chances of inaccuracies.

Acknowledging the on-going issues of support structures in the technology that its printer uses for 3D printing, the company provides double extruders in Roboze Argo 500.

The user can make the use of one extruder can for printing the support structure. Driving these extruders is a dual gear system that increases the reliability of the printer during the constant flow printing operation.

Controlling the automatic loading of the filaments during the printing process, alarming the user of residual material and end of the filament, is the advanced sensors of Roboze Argo 500.

They aim to reduce the time taken for setting the machine.

Storage of the spools, in Argo 500, happens in a closed environment at a controlled temperature.

This is keeping in mind the fact that polymers tend to retain moisture during the compounding, transporting, storage as well as molding phase.

Storing them at a controlled temperature is to ensure they are dry as well as there is no risk while printing them.

For the housing of filament spools, the use of four spool holders is made, two for the primary material, two for the support material.

Combining this system with automatic filament loading and residual material sensors leads to the prevention of the loss of print when the spool is exhausted.

PEEK and Ultem AM9085F are high-performance polymers, whereas Carbon PEEK and Carbon PA are composites that have a huge potential of replacing metal.

The printer is a TCT material award winner because of the availability of fourteen different materials for 3D printing including PC-LEXAN EXL AMHI240F. 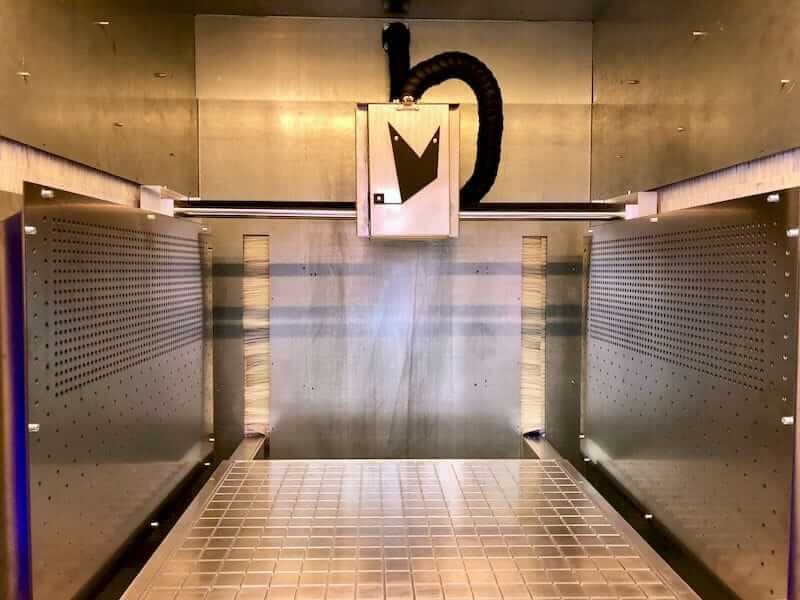 The printer is capable of printing with various materials, the list of which some solid materials that make part or functional prototype printed on Roboze Argo 500 act as metal replacements.

The filament size is 1.75 millimeters, and a maximum build volume of parts or functional prototypes on the printer can be 500 cubic millimeters.

However, the website of the manufacturer does not have a mention the price of this printer. 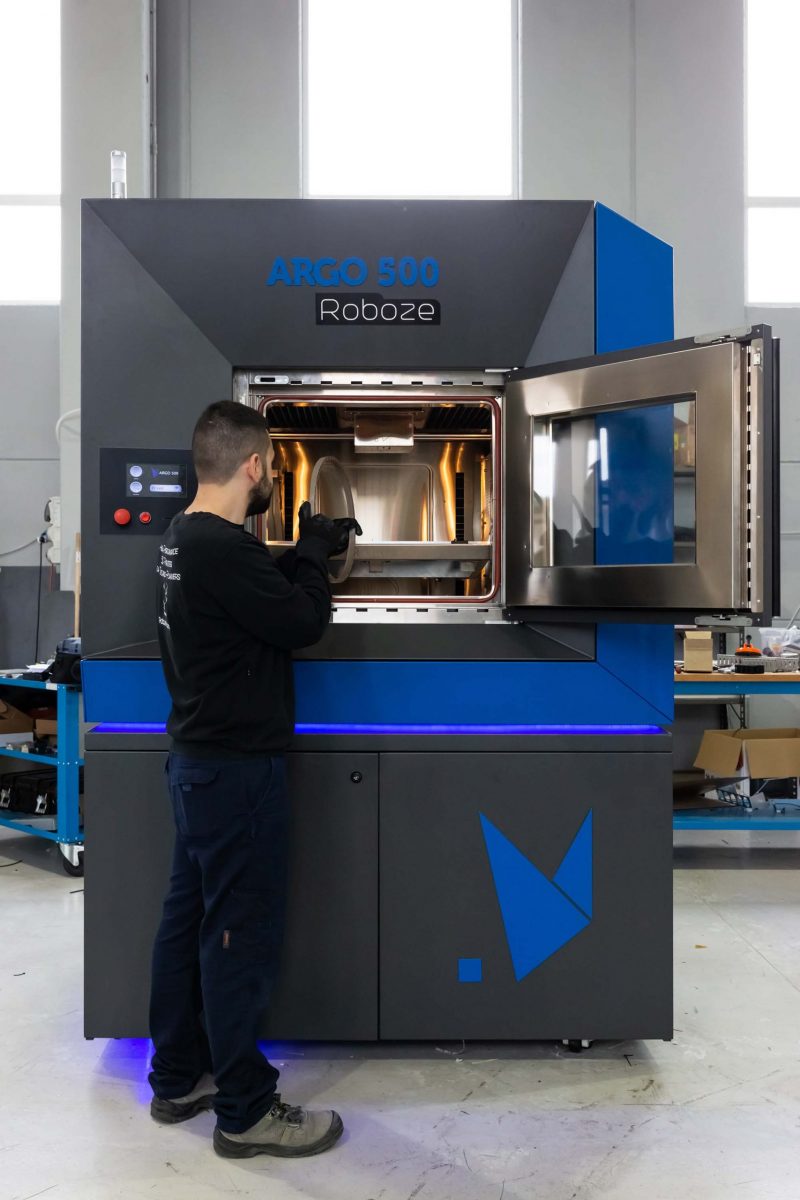 In a picture posted on the website, Roboze Argo 500 looks divided into two segments, upper and lower from its front view.

The lower segment of the printer appears further divided into the right square and the left.

Assuming that the construction of this printer is like other FDM 3D printers, the lower segment is for storing filament spools.

The upper segment of Roboze Argo 500 is for a print bed, owing to the open door in the picture.

There is a display just beside the door that leads to the print bed of the printer.

The downside of the door contains two buttons that might be for printing and pause options.

The Head of the door has the name of the printer and printer manufacturer in blue text and white respectively.

The right side of the lower segment contains the manufacturing company’s logo in blue.

As mentioned in one of the sections of the article above, the printer is a plug and play printer.

All you have to do is check the general settings, read the user manual book, and start to print part of a functional prototype.

The name of the printing type on which Roboze Argo 500 is based is Fused Deposition Melting that is one of the most popular technologies.

The printing cost of the printers based on this technology is generally low than other printing technologies because of not using a high-powered laser or electron beam for curing parts and functional prototypes.

However, the exact calculation of printing cost can only be made after knowing the infill of the material electricity consumption and many other design considerations. 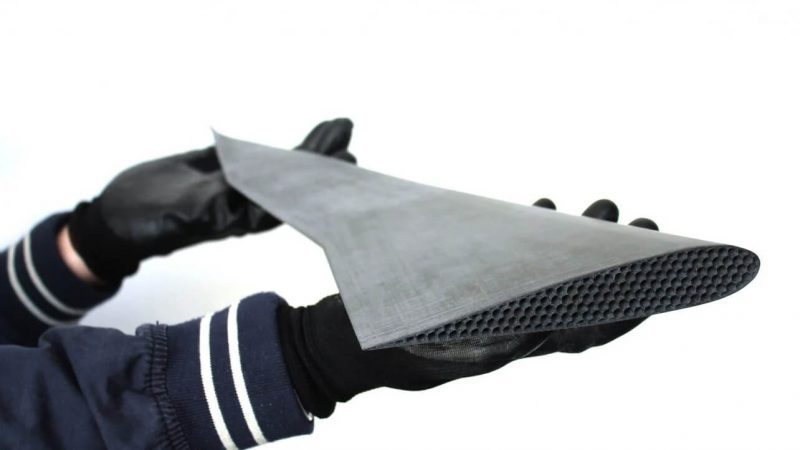 Application of the parts and functional prototypes made using Roboze Argo 500 is in the Aerospace and Defense, Automotive, Motorsport, Oil and Gas, and manufacturing industry.

Parts made by Roboze Argo replace metal, are used for functional prototyping, and in the production of finished parts.

Amazing pictures of some parts and functional prototypes printed using Roboze Argo 500 are on the website, so please check them out to know more about the quality of parts.

Simplify3D is the company’s recommendation for software. It is an open-sourced software that is claimed by many experts as an easy-to-use software equipped with a lot of features that simplify the complete slicing procedure.

However, there is no mention of information regarding software that Roboze Argo 500 comes with on its own webpage on the website of the printer manufacturer.

The Contact Us tab on the website of Roboze Argo 500’s printer manufacturer requires you to fill in the information, the basis of which the company would contact you.

You can contact the company using a phone number that is mentioned on the same webpage. The headquarters of the company is in Texas, USA.

The following factors should be taken into account while purchasing this printer.

3D Printer cost: Although not mentioned on the website, from other sources, the cost comes out to be expensive.

3D Printer capability: Printing with various materials is one of the main strengths of the printer.

3D Printer Practicality: There are many industries listed in a section of the article wherein parts and functional prototypes made by the printer are used.

3D Printer User expectations: Small business owners and professionals in the field of FDM 3D printing can take their bet on the printer.

Seeing the eccentricities that the printer is composed of, hardly anyone would doubt how much one would stand out by buying it.

Although, you need to look at the prospects of your own and match it with the printer combined with the level of intensity that you wish to stand out in the market.

Because the printer is all ready to make you do that with one click.