Based on the assumption that if you are reaching this article, you know what desktop 3D printers are, and what 3D printing technology is, in general.

The application of these machines has been listed out for various purposes and is still expanding. So, any attempt made by any writer to list down all the applications would appear to be limiting.

All one can say is, these machines have been in the past, used in so and so areas. The article also demands the understanding that “desktop” is strictly a very subjective adjective.

So, the chances of a desktop 3D printer listed on our article not able to fit-in your desk are as much as we terming a food dish to be delicious and you; not!

Having said, here is a generous attempt in presenting information and claims about a few printers that came up to us via our Google Search and the articles that treated the adjective “best” as a non-subjective one.

Name and a few other facts about desktop 3D printers

While framing the write-up of this article, we found sources of information that weren’t accurate in terms of the use of language in them.

For example, they would pass on conclusive judgments about the list of their printers and their descriptions thinking, what they write is going to be sold and judged by readers in the same way.

Another fact that should also be understood is, when we term a printer to be desktop, it means the printer was in the past able to 3D print a part or functional prototype on someone’s desk.

For researching this segment of the article, we went on the website and read what the website makers had to say about this printer.

The first claim is made to you as soon as you land on the webpage. The claim is left next to the front view depicting a picture of this printer.  “Compact 3D printing for professionals” .

A completely contradicting fact that we found while doing our research for this article is another article that listed this printer as number one in the list of “the best 3D printer for beginners to buy in 2020”.

“Convenient Desktop Printing” is the claim just next to the picture about which we are talking in the next section of this article, and the reason given for convenience is the small build volume offered by the printer maker/s.

“Faster Slicing, more control,” is the claim complimenting XYZprint i.e. the slicer offered by the company along with the printer.

The explanation given is the ability of slicer for allowing users to print from any third-party filament.

“Improved surface finish, reduce post-processing,” is the claim mentioned before “frustration-free calibration,” in black background, perhaps to highlight the part which is present in between the two claims.

The explanation given for the first claim is the availability of a 0.3 mm diameter extruder. Whereas for the second claim automated nine-point calibration detection system, making setup, calibration, and maintenance are held responsible.

Two filament spools, one seemingly black and another one in yellow; are pictured just to the right of this printer, a button of which is pressed by the hand of a guy wearing a blue colored shirt, the right hand of whom is operating a laptop.

Sharing the desk with a printer, spools of filaments, laptops are some 3D printed parts and functional prototypes.

The printer is not empty; it seems from the transparent body in the front of the print be, we thought! But it’s not visible because of the reflection of the complex shape on that transparent part.

The Original Prusa i3 MK3S

We did not dare to write “Prusa i3 MK3S” because we do not know the reason why manufacturers have prefixed the name of the printer as if there is a duplicate version of the same printer available in the same name form in the market.

The explanation under the picture about which we have shared in the section next to this one has facts and not claims about the printer. The first one: “Best 3D Printer,” according to All3DP.

The second one: “Editor’s choice,” again, according to All3DP.

The third one: “Highest rated 3D printer,” according to the 2019 Digital Fabrication Guide.

After the statement of claims without explanation ends, begins another statement about an engineering aspect of this printer, the expansion of this printer with a unique multi-material upgrade 2.0 addon for printing up to five materials simultaneously.

You get to see the hall of fame of this printer right below those two statements. Beneath them are not something that we or somebody else would like to call features of this printer.

Mind you! They are something that “WE ARE PROUD OF…” And if you are wondering who is “we” referring to? Is it is webpage content writers? Or the complete team who had made the printer? Or both? You would have to go to the Contact Us on the website and figure it out.

Making of the claim “Removable heat bed” with an explanation of the choice of smooth PEI sheets and textured powder coated PEI comes to the left of the “frame stability” claim, in the explanation of which, aluminum extruded Y-axis is into focus.

Then there is “silent & faster printing,” for which Trinamic 2130 drivers and Noctua fan on stealth mode are taken into account. Mentioning of the claims “Power Panic,” “filament sensor,” and “recover shifted layers,” happens in the second row.

Skipped steps and layer shifting are detected using the new Einsy Rambo motherboard, which is an explanation given for the third claim. The next and finally last row of claims made by the company is

“bond tech extruder,” “P.I.N.D.A. 2 Probe,” and “E3D V6 Nozzle.” Gripping the filament from both ends and increasing its push force, also making the printer reliable is the bond tech extruder.

There are two thermistors used by this printer. The first one measures the ambient temperature of the printer, whereas the second one is embedded in PINDA 2 probe for compensating the temperature drift.

The nozzle E3D V6 is known for providing high-temperature performance in every 3D printer they are used.

Picture of a yellow/orange colored spool placed on the spool holder of the printer, attached to the print head of the printer which has, seemingly, managed to 3D print a face, neck, and lower neck with a huge head or a crown is on the center screen of the device with which you land on the webpage.

Placing all of what we just shared on a wooden desk, you also see the picture maker’s attempt to blur many other desks containing many other things in the picture’s background.

This 3D printer is the successor of the award-winning Original Prusa i3 MK2 3D printer. The former extruder is rebuilt with surplus sensors. Original ...
Add to compare
Check Price
Prusa 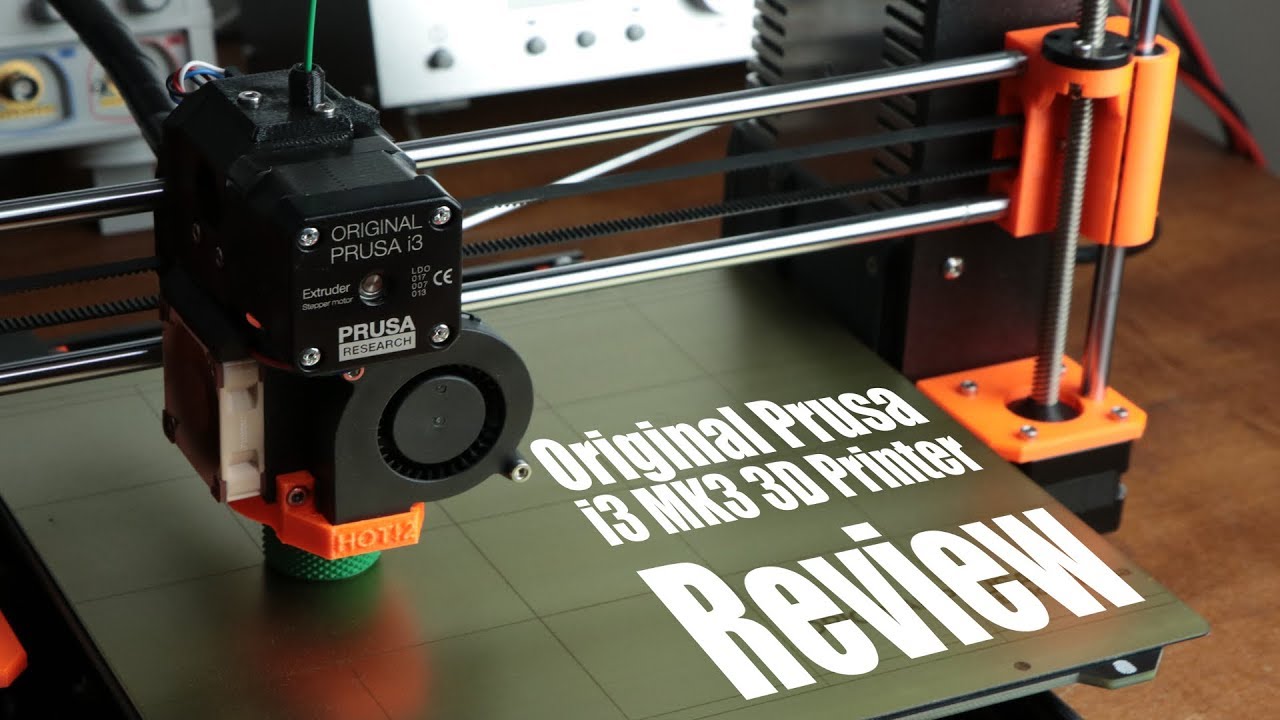 The front view of this printer is depicted in the picture right next to its name price, and kilograms of resin choice it is available is something your eyes will find when the device you are opening the webpage, lands on the webpage.

In terms of picture providing, the company has done an excellent job. If you want a picture of the printer with its top shield open, you have it on the webpage.

“Supreme Accuracy for highly detailed prints” followed by “precision five times higher than FDM printers,” are the claims you will get sidelined in a cropped picture of, seemingly, parts made by this printer on a desk.

A statement made just below this picture reads about the colorful touch screen the printer comes with! And how capable it is to pre-view the model that you will be making in an SD card, just like we see pictures in our Windows OS.

MacBook users are completely neglected for reasons best known to the makers of this website. Scrolling down, you get four claims right next to a video of this 3D printer.

The first one is about the previously mentioned “touch screen,” “unique resin vat,” “off-line point,” and “easy leveling.” Easy adjustment of the printer and replacement of the FEP film for saving our cost and time if the explanation is given for the second claim.

For the third one, the printer’s support for offline printing with a built-in operational system is held responsible. Whereas for the fourth one, the three-step leveling of this printer is considered easy.

The technical specifications of this printer are listed down just below these claiming section on the webpage.

As we have already mentioned in the above section about the six pictures of the printer that are going to strike your eyes as soon as you land on the webpage, you might have an idea about the detailing of pictures by the company in that terms.

Another picture of the printer; you will find when you reach the technical specifications region on the webpage.

The printer with its frame opened is found on a desk with an orange-colored part, seemingly, printed out of the printer itself, glass with some cubes, beside showpiece of a trunk of a tree, before a pencil stand with five pencils, before a photo frame. Out of the focus, are three humans sitting on a couch. Ouch!

The webpage ends with “2k LCD Screen,” “Quick Slicing,” “Easy Leveling,” and a Package list of the printer with a comparison of Photo with Photon S and 4 Max Pro.

When you are searching to buy a desktop 3D printer for yourself, if you are cost-conscious, you should compare the printing cost of a printer that you are seeking to buy the 3D printing service cost of companies that are serving you online.

The other thing you should also look at is the frequency at which you are getting the demands of 3D printing coming to you. If they are lower and you can manage it by purchasing online or offline from someone, it’s fine! You do not want to go in for the investment of a desktop 3D printer.

It’s all about matching the services this printer can provide with the necessities that you have in your mind and the possibilities which you can imagine this printer to help you out with.

Doing so would exactly tell you how much do you need a desktop 3D printer for your daily routine and stuff.

And if you are a 3D printing lover in general, none of this applies to you, because you are going to do what it takes to increase the scope of your experimentation with this emerging new manufacturing technology.