The T3500 is a large delta 3D printer made by Tractus3D, a manufacturer based in the Netherlands. This 3D printer is suitable for industrial applications and prototyping.

Largest in the lineup of 3D printers offered by Tractus, 3D T3500 allows you to print structures of height up to 2.1 meters and 1-meter diameter ...
Add to wishlistAdded to wishlistRemoved from wishlist 0
Add to compare
Check Price
Tractus3D

Before starting to write about things that you need to know about Tractus3D T3500, we will tell you a little bit about the website of Tractus3D.

After spending some seconds of your time on this website, the most attractive thing that you find is asking to be clicked, is the down arrow that is moving up-down and back forth.

But before clicking on that, you would notice a dark color in the background and blurry graphics design.

Before the background and the graphics is the 3D printer which looks like a box in which humans used to go for making STD/ISD calls, a typical phone booth from which the world has grown above, thanks to smartphones!

The 3D printer is named T2000, which is what the text beside the printer informs you.

A quick question that can strike your mind is after knowing that the company has, to date managed to manufacture eight 3D printers, so, why have they only highlighted T2000?

Anyways! The website has ten tabs including “Get A Quote”, Country’s Flag, and Search.

Coming back, to the down arrow beneath the mouse symbol that attracts you.

Scrolling down, the first message that you get is the one that you would normally want to wish to see on every website that you currently check out i.e.

Something that makes Tractus3D stand apart is their About Us tab wherein, unlike other websites of 3D printer manufacturers they haven’t wasted time in telling out their story! 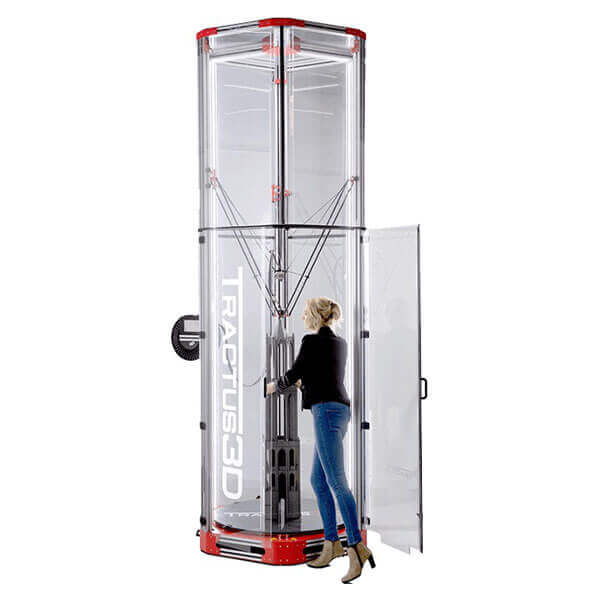 So, when you click on the About Us tab, you can either go to the News webpage or the Contact, Brandguide, Careers, and Warranty webpages. And now about the Features of Tractus T3500

With the title of the 3D printer, the company gives out the first information about this printer i.e. it can print up to 2.1 meters.

The other two printers are named T3000 and T2000. The second column is named Pro Series and Desk Series.

Probably the name of the series is given by Tractus3D for making it easier for their customers to differentiate and associate themselves with the class they belong to.

For example, if you are a professional working in the field of 3D printing, there are high chances that you will want to purchase a 3D printer from Pro Series and vice versa.

The fourth column is about Upgrades and Add-ons. When you click on T3500 – print up to 2.1 meters the information about this printer starts to pour out.

You get to know things which you could have guessed if you are familiar with 3D printing websites in general like, the number that suffixes the name of a 3D printer has to do something with the print volume of that 3D printer.

The other piece of information that reads out to you when you read the text is, how Tractus T3500 can print one meter in diameter round.

There is an option of getting the quote for this 3D printer, just beneath the information pouring out texts.

When you click “Request for a free quote,” a webpage that opens up ask for you and your company details, which you need to fill in to request for your quote. And now talking about the specific features of this printer.

The overall design of T2000 is the same as T3000 and T3500, all of them manage to convincingly relate to the STD phone booth that you have seen in your life.

The difference is, things get bigger when you go from 2000 to 3500 and vice versa. Just like an STD phone booth, this printer has a closed chamber.

While heating the material that you are looking to 3D print parts and functional prototypes with, you need a constant rise in the temperature until the material’s melting temperature is reached.

That is something Tractus T3500 is able to give you very successfully. This is the first step of the complete printing procedure, which is pretty “fast in time” achieved using this printer.

Although, this is a feature that arguably, you would find every company and the text which they write for their 3D printer’s speaks out to your LOUDLY, there are no other practical means to say that out to you except for writing it.

So, Tractus too does the same claiming game. But, there is a reason why Tractus says so, i.e. the closed chamber design of its 3D printer.

Affordability is something we could not get a check on because you need to ask for a quote and presumably the quote may vary from one to the other.

So, this feature that you get to see on the website, might not convince you and is a very subjective feature, but we will have to do with it because we do not have other choices. 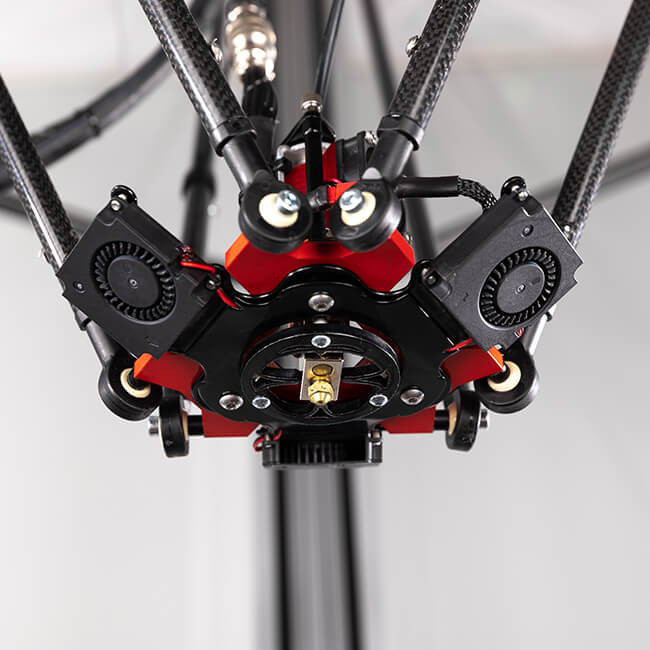 The company has listed down the printer specifications with utmost detailing, just above the paragraph from where we constructed the printer’s features.

You can compare the claim that Tractus is making about T3500’s print speed with other printers to know the difference.

Tractus claims T3500 prints 300 mm in one second. The other factor which importantly you can also compare with other printers is the X, Y, and Z resolution i.e. 20, 20, and 50 microns.

These both factors, when compared with other printers would exactly let you determine, how fast and accurate the printer is compared to the competitors in the same budget.

Another interesting thing that the company has done, is they have mentioned the layer resolution separately with assuming, the test prints they’ve done with the printer nozzle range that they offer.

The build plate of Tractus T3500 can withstand temperatures up to 110 degrees Celsius. And the bedplate leveling is kept automatic.

The heat-up time of this printer for reaching 60 degrees Celsius is eight minutes.

The nozzle can withstand temperatures up to 300 degrees Celsius and can heat up in less than 90 seconds.

The maximum extrusion volume of the print head is 110 cubic millimeters in one second.

As mentioned above in the article, the price of this 3D printer is something that you can only know by requesting a quote from the manufacturer.

Although if you try to search on Google by typing “Tractus3D T3500 price,” it shows $55,000 as seen from other manufacturers.

So, the best advice for the price is to request a quote on the manufacturer’s website. 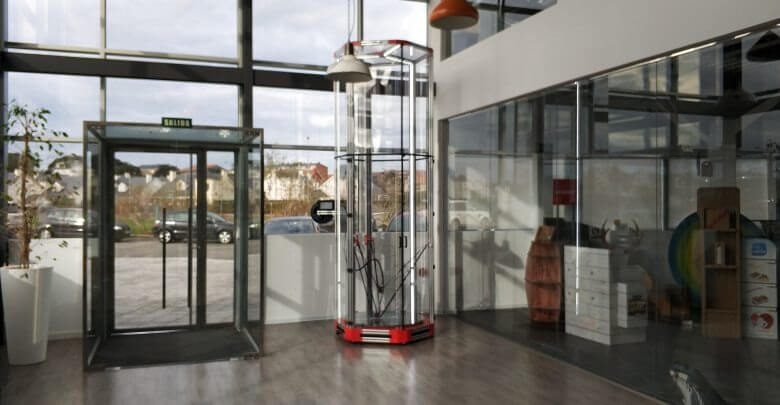 Although it read funny that a 3D printer looks like an STD phone booth, it is actually so.

Those are the first impressions that we got of the printer seeing its picture on its website.

Our best guess about this connection is the nozzle connected with the motors.

There is a print bed at the base. And in the pictures that give a close look at the nozzle, you can see the screws and bolts and complete the construction of the nozzle stand.

There are also two pictures giving a zoomed look at the rails that connect this nozzle.

Because of which this nozzle can move up from down where it is while printing a layer.

The printer should, like every other industrial-grade printer come completely assembled.

All you have to do is read the manual and start your printing with it.

There is a separate tab on the website called Knowledge that has four columns.

The second column reads out Operating the 3D printer.

The printer prints using FDM 3D printing technology in which a filament of 3D print material is used for generating parts and functional prototypes.

Although the overall printing cost of this printer would be lesser than an industrial-grade printer operating on any other technology.

But, one could exactly how much lower only after knowing the infill of the parts or functional prototype to be printed. 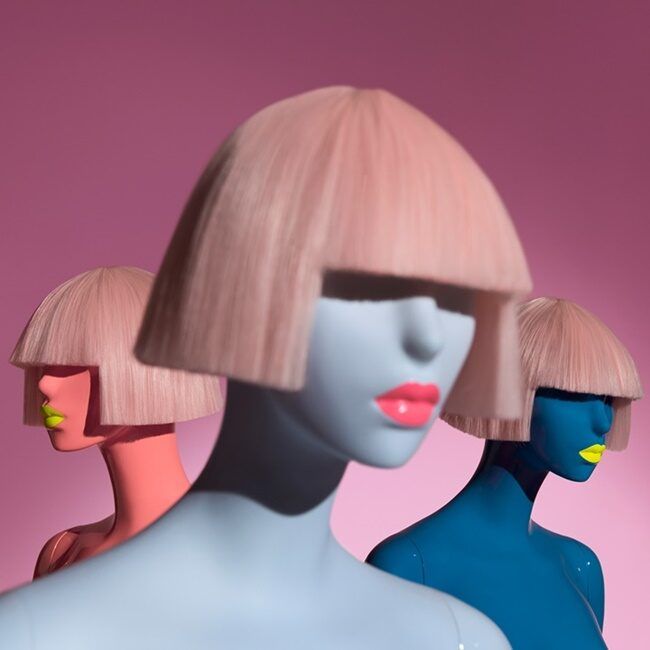 Apart from the claim that you have with text stating that T3500 is made from passion with a single-minded goal and boasts of high accuracy, you do not actually have any photographs to see and tell how accurate the print qualities are.

You can only tell by comparing the layer resolution that this printer offers with other printers.

When we searched using the search tab on the website of this 3D printer, we got to know that the recommended slicing software is Simplify3D.

You can search for this software online and get it easily. It is an open-sourced software.

In the Support tab, you have Customer Support from which, if you have any problem, you can generate a Support Ticket. Apart from this option, you can contact the manufacturer with the phone number and the email that is provided on the website. You can also RMA request, or SLA, or click on “where to find the serial number,” on the website.

Below is a quick recap of the main factors that we discussed in-depth, above.

3D Printer Cost: The company boasts about the printer being an affordable one.

3D Print Quality: Again, the company claims parts and functional prototypes printed by this printer to be high in quality.

3D Printer Practicality: Automotive, Education, and Signage and retail are three areas where this 3D printer is used.

3D Printer User Expectations: As a user, you can expect good company support for everything.

The manufacturer’s website is really well organized and things are easy to navigate.

You have a “Used By” tab which is very rare to see on any other website.

Overall, it gives a sense of reliability and if you also feel the same, you can opt to buy it.