Uniz Slash Pro is an efficient solution for individuals who need the extended build envelop that the company has constructed in this desktop’s setup.

The print volume is something that the brand boasts of and we would say the boasting is well-deserved. It is a resin-based 3D printer that cures part ...
Add to wishlistAdded to wishlistRemoved from wishlist 0
Add to compare
Check Price
Uniz

The Pro version of Uniz Slash is equipped with UDP technology which is specially developed by the manufacturer. It enables users to print parts and functional prototypes at a very fast speed. An adult’s shoe hole can be printed in less than 40 minutes.

The feature that is more advanced in this printer than its predecessor is the Z-axis build envelope.

There is a specialty of every Slash printer manufactured by Uniz. They can share all the five types of functional resins that can deliver high-resolution prints in the build volume.

Though there are some restrictions in printing with this printer in the UDP mode, like Uniz’s specially engineered resins only work during this more. These resins are formed for giving you the highest quality prints that showcase the finest details in your designs.

Resins of this printer create highly accurate and robust parts and functional prototypes that are ideal for industrial-grade rapid prototyping and product development. 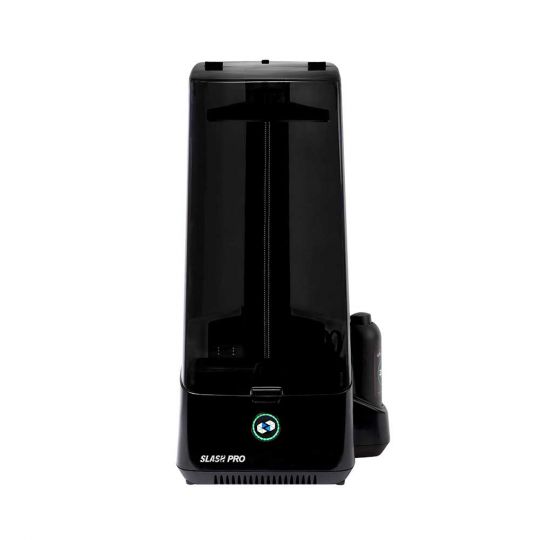 Uniz Slash Pro is an efficient solution for individuals who need the extended build envelop that the company has constructed in this desktop’s setup. Uniz released four other printers with Slash Pro in the same year that meant to target four different sectors of industry. They were, Slash+, Slash OL, zSLTV 15, and zSLTV 23.

As hinted in the introduction above, there are two modes that this printer can be operated on. Both of them work using the principle of LCD Stereo Lithography technology in which a photosensitive resin is cured by a light source.

In normal mode, Uniz Slash pro uses normal resins, whereas, in UDP mode, the printer uses special resins that are developed by the company. The light source, which in this case is LCD is contained in the tank and is cured against the build platform of the printer.

Although you have printers like Phrozen Shuffle XL which uses the same mechanism of moving only along the Z-axis, in Uniz Slash Pro, it’s the doubling of the movement that lets it achieve similar or high-quality prints in lesser time.

The machine comes with automatic level control and its software allows users to create smart supports for models. The result is better quality prints in no time. Let’s take a look at features one by one.

Uni-Directional Peeling is a result of attempts that have been made in the past to innovate the high quality of producing SLA technology. Consumers of 3D printing who did business on a small level worked only on FDM 3D printers until the invention of SLA.

After the invention, they started working with FDM as well as SLA, but SLA in a lesser amount. Though SLA gave them the quality that FDM never did, it did not produce a part of a prototype at the same time as FDM did.

This problem was noted by manufacturers of SLA printers and an urge to address this problem correctly was started. Uniz, being one of those manufacturers came up with this uni-directional peeling technology.

Here, by reducing the up-and-down peel to only one-directional peeling, it was able to free the SLA 3D printing market of the speed restrictions. With a printing speed of over 700mm/hr on the z-axis, UDP technology shook the market.

When printing continuously, the level controlling of the print bed and the base, as well as the height adjustment of the distance of the light source from the resin has to be done faster. Doing this adjustment manually demands a lot of effort when continuous printing one after the other part.

The makers of this printer have kept this in mind and introduced this feature of automatic leveling. After every print, the print bed would be leveled according to the next print.

Being an SLA desktop 3D printer, normal complaints about it is that the printer does not stay stable during the printing process. Especially while parts and geometries to be printed have a build volume in the range of the maximum build volume that can be printed in the printer.

If the frame of the printer is as strong as Unit Slash Pro’s is, the problem of vibration during the print process or the printer not remaining stable, vanishes.

$4499 is the market price of the printer. Now for all those who are wondering how come this can be the price of the desktop printer! Well, looking at the list of features and the amazing speed that the printer can deliver, Uniz Slash Pro would hardly be judged as unsatisfactory in terms of the quality work that it delivers.

So the price is not at all higher than printers which deliver the same amount of quality work, instead, it’s lower. 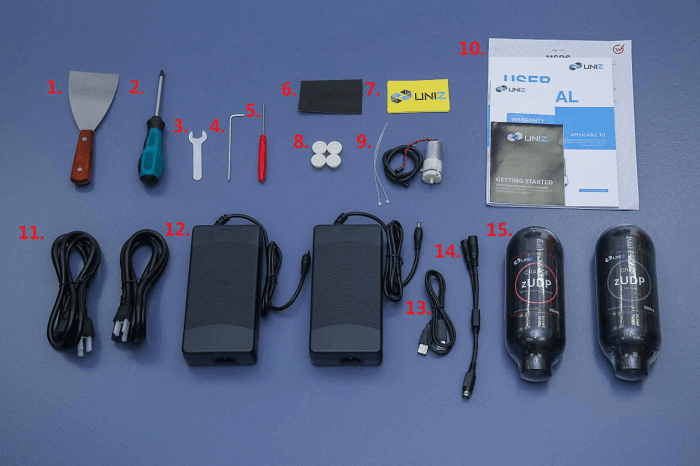 Completely black in colored, the printer takes away your eye’s attention to the table on which it is kept. The right side of the printer has a bottle type structure for keeping the resin, and there is an opening that lets you see the mechanism of the printer from its front view.

Opening the lid and you will see the mechanism based on which the one-sided peeling happens in the printer. It’s the Z-axis build envelope and doubled in size than in its predecessor.

The LCD light source is at the bottom and it produces light rays in a much denser way than in other SLA printers. The outer body is made of carbon steel reinforced.

When you open the lid, you also get to see the resin tank which can be opened from the bottom left. Notice the company’s logo at the bottom when the printer is viewed from its front view, it is the start button.

The area is at the bottommost of the printer is the place from which air is allowed to tuck in. After the printing of parts is done, the cooling is done using this area. The adjustable leveling screws are present just beside this area.

There is a level sensor by which the print bed can be automatically leveled at the right bottom, when the lid of the printer is opened, at the inside body.

The printer comes fully assembled. All you have to do is read the manual that the manufacturer has accompanied with the printer in its packaging. After unboxing you’d have to place the printer on a platform and adjust the adjustable screws which are present on the right bottom of the printer.

These screws help you level the printer if it’s slightly tilted. You also have the level bubbling situated at the center of the build platform. Whenever the air bubble is centered; the printer is on its level.

After adjusting the screws, you’d have to tilt the resin tank which is present at the inside body of this printer. Tilting it to exactly 30 degrees would let you insert the rear fixed locating lugs into the holes present at the back end of the LED.

The last step of setting up the printer is installing the liquid level sensor at the right bottom of the inside body.

The infill percentage of parts and prototypes that are printed using Uniz Slash Pro is higher than its competitors. The cost of resin that can be printed using the UDP Mode of the printer is high. The Z-axis travel is double that its predecessor.

And the printer is known to consume more electricity. Most of the factors that contribute to the printing cost of the printer are at the higher end so the overall printing cost is something that you are going to find higher than other printer’s which give close competition to this one. 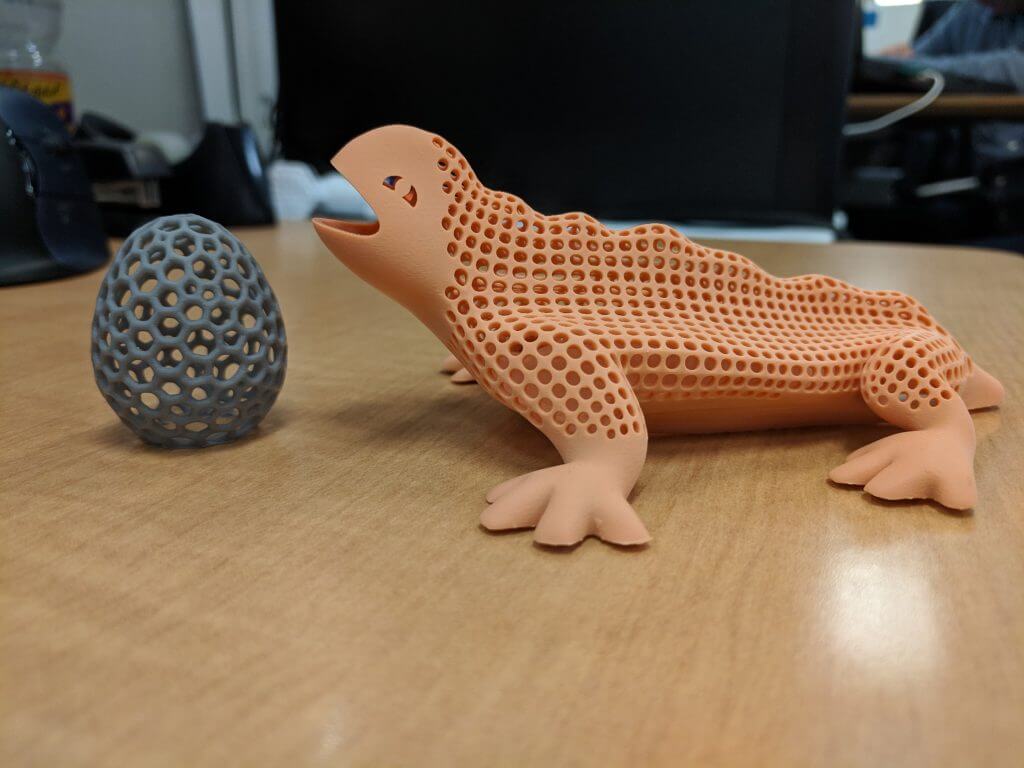 Uniz Slash Pro is an LCD 3D printer. These 3D printers are known to use an array of Ultra Violet LCD rays as a light source. These light rays come from the flat LCD panels shining directly, parallel to the build area.

Because these light rays aren’t expanded much, the pixel distortion is not an issue with Uniz Slash Pro. The print quality of this printer depends on the density of the LCD rays. The denser they stay, the more quality work they are known to produce.

Uniz Slash Pro has more pixels and in turn, a better print quality. And the fact that the printer can maintain this quality, yet produce parts and functional prototypes faster than others, is the add on benefit.

In Uniz Slash Pro, the entire layer is flashed at one, instead of single-pointed flashing. This enables it to produce print speed, never seen before. 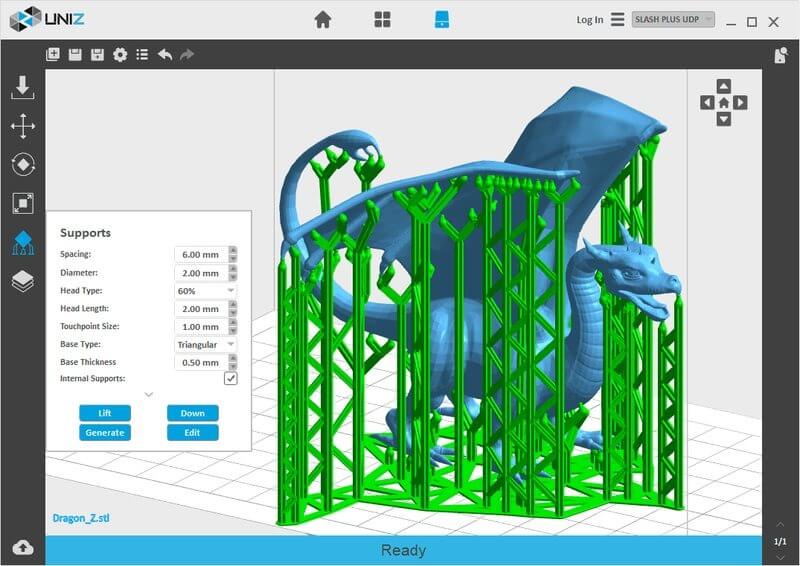 Uniz Slash Pro’s software can be operated from computers running on the operating system Windows 7 and above that has 64 bit. Mac operators need to have OS X 10.7 and above, again 64 bit only.

The software demands 16 GB RAM, open GL 2.1, and discrete graphics. Advanced features of this software are that it is a multi-printer management software as written about in the feature section of this article.

The compatible extensions for this printer’s software are: .STL, .OBJ, .AMF, 3MF, and UNIZ. You can operate this software from iPhones, iPads, Android phones, and tablets, apart from computers.

The company’s website has complete information about what to do as soon as the printer arrives at your place, till the time you complete printing the first print.

Apart from that, there is a manual to guide you and you can contact the manufacturer using various sources. Overall, the customer service of the company is satisfactory.

A summation of the factors mentioned below would tell you whether the printer is worth buying or not.

3D Print Quality: The infill percentage of parts and prototypes printed using Uniz Slash Pro is high and the layer lines are not visible.

3D Printer Capability: Although not in the UDP mode, the printer can print with third party resins in the normal mode.

3D Printer Practicality: Businesses that are willing to upgrade their level of doing business from small to medium would find the printer extremely useful.

The company hit hard the market of 3D printing buys bringing in five different printers in five different sectors. Being one of those printers, Uniz Slash Pro promises to deliver according to the price you pay for it.

Everything You Need To Know About Rubber 3D Printing

How To Make a SLA Prototype - Step By Step Guide