Even though it is the smallest in the list of printers offered by Potterbot, it is capable of the highest print speeds. And its compact design can easily fit in almost any space.

There are four different printers listed on the manufacturer’s website having the suffix of number 9 to them.

This chain makes us predict that Micro 9 should have been the start of this series that was introduced by the manufacturer to its customers of ceramic 3D printers.

Yes! The company is specifically into manufacturing these kinds of 3D printers. All the 3D printers that they have on their list currently are open design 3D printers.

When you open a webpage on the company’s website that specifically states facts about Micro 9, you get to know that this 3D printer is their entry-level 3D ceramic printer. 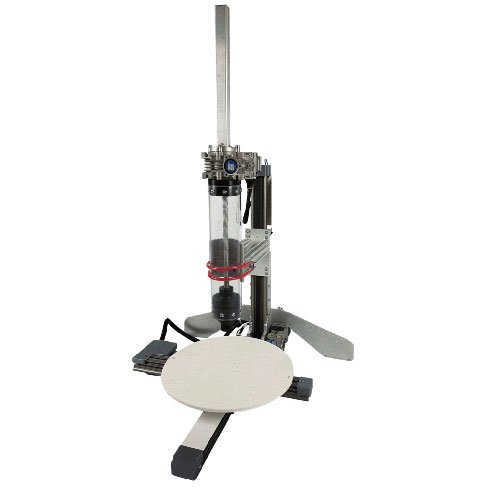 Other companies that are also named along with Potterbot when it comes to ceramic 3D printing are Cerambot, Lutum, Wasp, Stone Flower, and Formlabs.

If you search for top 3D printers that are specifically in ceramic 3D printing, you might encounter these names.

But what separates Potterbot from these names is how the company has moved little by little with every 3D printer it started offering to its consumers.

What we mean to state here is the fact that when you compare Potterbot 9 with Potterbot 9 Pro, the only difference in the feature-offering of both the printers that you get to know is closed-loop stepper motors along the Z-axis and extruder.

Most of the other companies operating in 3D printing would have done this as an upgrade in their former printer.

Potterbot does this, not to make one more printer count to its name, but because it is specific.

And you realize the specificity that the company’s founders possess by visiting their website.

Anyways! We will start our in-depth review of 3D Potterbot Micro 9 by listing down its features and explaining them.

As per the 1st March 2020s updated list of “who’s using our printers,” you get to see the massive name listing of universities all across the world.

It’s fascinating to see how Potterbot has put out in the open the names of their customers, their competitors, and their distributors.

It makes anyone who reads this company’s website in detail, a strong sense of reliability.

“The Only Dedicated 3D Ceramic Printer using real clay,” is the tagline of the company, and if you are wondering what makes them say so? Well now is the time to start with our first feature.

The company claims to directly extrude clay and not use a compressed air system printing slip as other company’s do.

Now, if you are seeing any company use the latter one, you need to check out whether the company guarantees you use real clay or the clay that can be watered down or is an alcohol diluted one.

With the latter one, there isn’t a possibility of 3D printing full-body clay parts or functional prototypes.

In addition to this, if you are using a direct extrusion system, you can also print with paste-like materials.

This is also something that is not easily possible with the compressed air system printing slip.

So, take the real clay that is made by Potterbot, use it in this printer, and get the direct extrusion system to print parts and functional prototypes accordingly.

This part of the printer lets you smoothly transport one part from one place to the other.

Because these rails are made up of Aluminum, they are strong enough to withstand the temperature of materials with which you plan to 3D print your part or a functional prototype.

The company’s website claims how these rails are not only robust but they have a smooth surface which ensures there is minimum friction between the objects that are in touch which these rails.

The other thing to note is, that because these rails are made up of Aluminum they can withstand high temperatures.

Since the company primarily targets these printers to universities and institutions, it can cope up with the surrounding atmospheric conditions.

Above this, the company also claims that this printer can withstand industrial environments. The easy movement of parts is necessary during the print process.

Especially if you know that you have to continuously manufacture some or the other part for hours, which is in the case of mass production.

So, transferring parts related that are made from ceramic materials will not be an issue and the design of this printer has one feature to ensure so.

The kind of the first layer that will be 3D printed on your part or functional prototype is determined by the nozzle.

So, the design of the nozzle should be kept according to the printing the 3D printer is going to be implied to do.

It is because that Potterbots have kept the nozzle design uniform, you’d be able to use this nozzle not only for this printer but also if you need it for some other 3D printer that is made by this company too.

This company allows you to interchange nozzles between all of the printers that are offered by the company starting from the Micro to the Scara V3 which is the latest offering by the company.

Potterbot is a company that keeps on improving its 3D systems. By doing so, it has landed on this amazing feature that allows you to control a complete printer over Wi-fi.

So, you do not necessarily need to be near the printer or on the desk where you have placed it to control it.

You can be anywhere around where there is the Internet at the place and that’s it, control your printer remotely.

For more information regarding this feature the company has placed a YouTube video that gives you the information, you can have a look at that.

Controlling your files that are being transferred to the 3D printer even from multiple devices at the same time is possible with this new feature. The interface lets you get over every setting of the machine very easily. 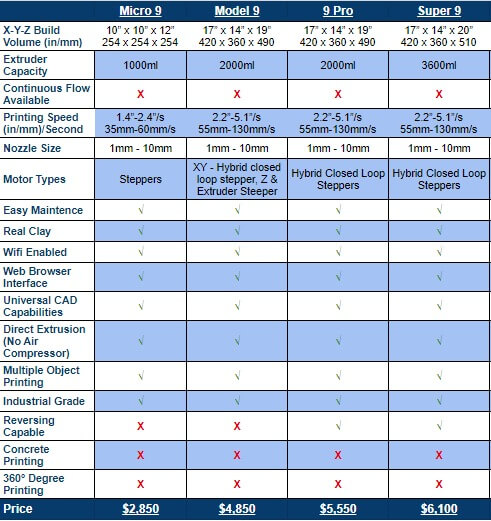 According to the claims by the company, you need 784mm space along the X-axis, 711mm along the Y-axis, and 1168mm along the Z-axis.

The printer’s bed diameter is 343mm whereas its height to the top of the extruder when fully extended is 1168mm.

The printer weighs 30 lbs and its average speed ranges from 35 to 60 mm per second according to the quality of a part or functional prototype needed to print.

The power consumption of this printer is 24V ~2 amps, ~50 Watt, the main controller board of the printer runs with Duet3D with Arm SAM4E8E: 120MHz ARM Cortex-M4.

If you are one of those readers that consider, features and specifications the side part of the review and Price being the main part, here is what you were waiting for.

As mentioned on the company’s website, this 3D printer is available to you for $2850 if you buy from the website, of course.

Apart from the website, the 3D printer is also available to you on Clayking, Shop3D universe, 3D printing, Precise 3D hub, etc.

The printer has an open design that features an X-shaped structure at the base which will carry the product that you are wishing to 3D print.

There are vertical Aluminum anodized rails that we talked about. The function of these rails will be to carry the nozzle and its holder against the gravity after one layer of the part or functional prototype that you are willing to 3D print is 3D printed.

Apart from this, there is nothing much to look out for, the overall design is simple.

When the overall design is simple, the setup is also so. The box comes with 3D Potterbot Micro 9, Stepper motors one for each axis i.e. X, Y, and Z.

Included with this are two 1000 ml extruder tubes and four anodized nozzles starting from 3mm going up to 6mm.

To fix the complete construction, the manufacturers have provided you with Alan key set, grease, acme driver tool, tie wraps, and extra screws. There is also a power supply and USB cable to operate the printer with efficiency.

Although the printer can be fully controlled through a web interface, there are no apps or software installation needed whatsoever.

If you want a non-wifi version of this printer you can avail the same by contacting the company.

The company uses material extrusion technology for 3D printing, which is very much similar to FDM 3D printing technology.

So, the deposition of part or functional prototype that you are willing to 3D print happens layer by layer.

Although you cannot say much about the printing cost, because it will depend on a lot of factors, but overall 3D printers that operate on FDM 3D printing technology are known to have lower printing costs than SLA 3D printers because of the lower infill percentage. 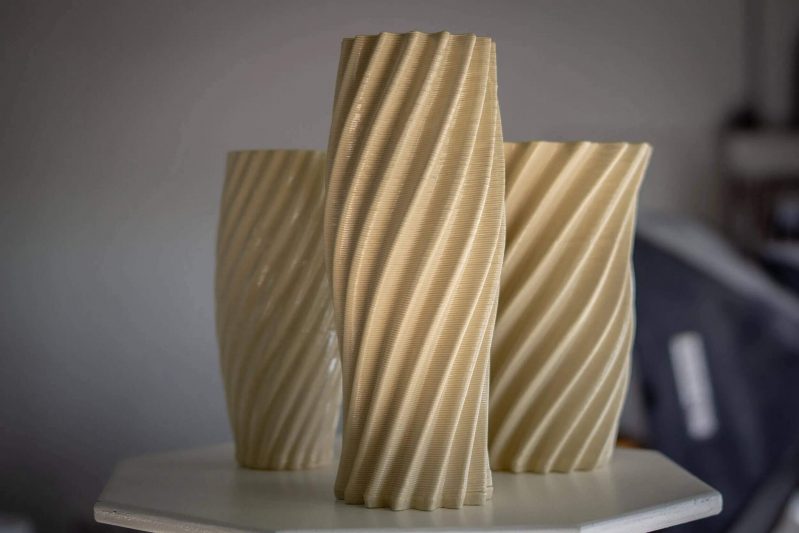 You will hardly find a company as openly displaying the products made by their printers, as Potterbot. Not only Potterbot do it openly, but also coolly.

Why we say the latter is because when you scroll down the webpage, on its website, you get to see 3D Potter Instagram i.e. the company’s Instagram, where it has got all the data of video as well as photographs of parts printed by the company.

Potterware, Fusion 360 and Simplify 3D are the software recommendations given by the company for entry, entry-medium level experience to its users.

Starting with Potterware, the company claims it to alleviate the need of learning 3D modeling software by allowing anyone to design sculptural or functional pottery.

This software features easy to use sliders and printable files download directly to your computer, which allows you to unleash your creative potential in digital clay!

There is a Contact and Info tab on the company’s website that can give you every information you need about Pottebots or the printers that they offer.

When you click on the Contact tab, a form will open in front of you which you can fill to let the company get to you.

Apart from this, there are contact numbers and email ids that the company thinks would help you to get the information.

Below are a few factors that will matter to you while purchasing this printer.

3D Printer Capability: Because of anodized aluminum rails even plastic-like materials can be 3D printed using the printer.

3D Printer Practicality: The company recommends this printer for universities as well as institutions.

3D Printer User Expectations: A good quality print in parts and functional prototypes can be expected with this 3D printer.

The company claims this printer to be one for the classroom environment or an individual artist that just wants to get started with the new technology.

Potterbot Micro 9 features the 1,000 ml extruder and a building envelope of up to 1 foot.

Even though it is the smallest in the list of printers offered by Potterbot, it is capable of the highest print speeds. And its compact design can easily fit in almost any space.

3D Print Fabric - How is it Possible? Step by Step