C3600 Ultimate is an industrial-grade 3D printer based on the Stereolithography technique of 3D printing which comes with a free link support technology at a reduced price per part is available on there.

3D Ceram is the name of the company that has manufactured the printer named C3600. When you land on the company’s website, there are four slider pictures that are going to take all your attention at first glance.

In, arguably what was the first photograph that we witnessed, a very impressive building was seen with the text privileged scientific environment. The next one had CERAMAKER 3D Printer the third one had CERAM 4.0 which is a fully automated line.

Then you have CERAM Pastes for Additive manufacturing. You have six tabs on the homepage of the company’s website.

In the turnkey line for the 3D printing tab, you will get the printers and equipment for the production of ceramics option. On the left, after clicking that option, when the webpage opens up, you would find C100, C900, and C3600.

With the title of this printer, there is a company’s recommendation that comes along which is the ultimate solution for mass production, indicating all the industrialists that there is something that the company offers for them. 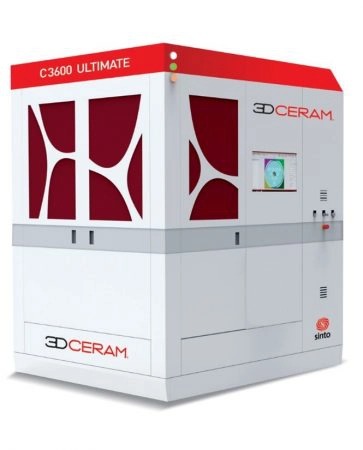 When you click on C3600, you get to see the information specifically about this printer, there is a picture before which you have.

Information like, this is an industrial-grade 3D printer based on the Stereolithography technique of 3D printing which comes with a free link support technology at a reduced price per part is available on there.

You will also come to know that if you use this printer you will get a reduced cleaning time as well as an adapted serial printing printer.

To know much more amazing features of this printer in a little more detail, and its specifications, print quality, first impressions, setup, software and a lot more you will have to read the complete article.

The company is a French-Japanese one, based in Limoges, introduced this printer at Formnext its latest 3D printer for advanced ceramics parts production.

The new C3600 Ultimate features an impressive build volume of 600 mm x 600 mm x 300 mm. Something the printer is capable of processing is rare ceramics such as zirconia, alumina, and a range of other materials.

The complete system of 3D printing was developed for mass production of some of the largest advanced ceramic parts, including aerospace components such as satellite mirrors.

So, as you can already see from the introduction of this article there are three printers that the company manufactures all for different use and neatly categorized as you can see on the website, C 100 EASY is for labs and research center, C900 Flex is from lab to fab and C3600 is what the company suggests for mass production.

So, the company has ensured that it is not like one of those companies that leaves its customers in a confusion, wherein they do not know which one of their product offerings are going to suit their application.

The build volume that this printer offers is also mentioned in the above paragraph and you can compare it with the printers that specifically claim to be ceramic 3D printers and make your own judgments based on that.

Speaking of the print speed, there is a classic problem that is encountered in all techniques that are more or less based on photopolymerization techniques and especially with dense ceramic slurries.

How the C3600 Ultimate addresses this issue is by equipping itself with 4 laser sources, ensuring that a printing time the machine offers is compatible with industrial needs.

The issue of support structures is also one of the main classical problems that 3D printing technology, in general, has to deal with. Ceram C3600 printer has Support Free Link technology, which is a proprietary technology developed by 3DCeram for the manufacturing of 3D printing supports.

What this technology enables its users to do is build their parts without leaving support marks, helping to ensure better quality prints.

So when you will develop a part or functional prototype using this technology, you will for sure get a superior quality than the printer or printing technology that uses support structures.

Because if you have support structures, even after 3D printing your object, removing it, and taking out the final object from the printer would take some amount of your time.

Imagine, you are doing mass production of some part and some x minutes of time is what you need to give for post-processing, the amount of time that you would end up giving cumulatively in post-processing, wouldn’t that be huge?

When you are doing mass production, you need a 3D printer which is a little bit self-intuitive. That’s exactly what this printer is. Small issues are not what you are going to be constantly hammered by this printer. Instead what you will have is a method of co-operation with each time you interact with the printer.

Of course, this is not an AI-based 3D printer, so if you won’t feel the printer being that intuitive, rather it’s a lot more subtle than other printers which only work in the areas they are told to and are not at all adaptive according to the user-specific needs.

So credit needs to be given to the manufacturing company of this printer for making it a little user-friendly than other printers in the same price range. 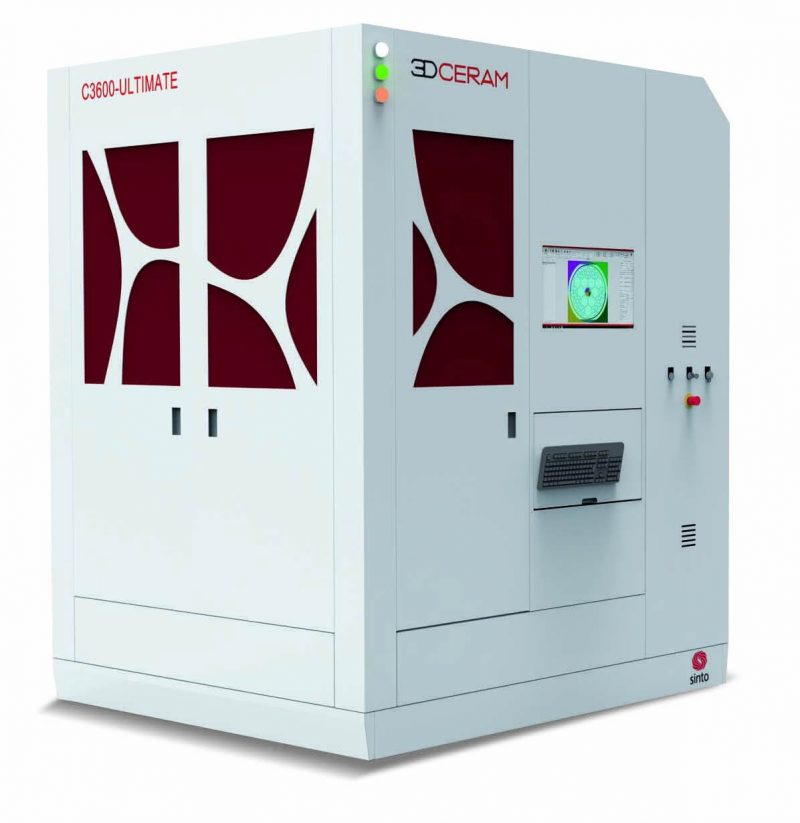 The technical data that is mentioned by the website of the manufacturing company starts with the dimensions of the printer which are 2100 mm x 1800 mm x 2500 mm in its width, depth, and height respectively.

The building platform size of the printer is as its build volume which is already mentioned above i.e. 600 mm x 600 mm x 300 mm.

The approximate weight of this printer is 4000 kg and the electrical requirements of this printer are 220-240 VAC / 50Hz and the Electric power required for printing of parts and functional prototypes are 4 kW.

The number of Light Sources used by the printer is 4 UV Lasers. C3600 uses a Laser spot that has a diameter of 60 micrometers and a UV Wavelength of 405 nanometers.

After printing parts, the minimum layer thickness that you would be able to see on your parts will range anywhere from 0.025 – 0.125 millimeters.

The optimal room temperature of the room in which the printer stays should be around 20-25°C, it can go up to 1°C/hour, relative humidity should be 50% and the compressed air 6 bars dry.

You will have to contact the manufacturer for getting a quote for this printer. However, there are websites that claim this 3D printer to be less than $250,000, in case you need the range. But the final price is something you would have to contact the company to know. 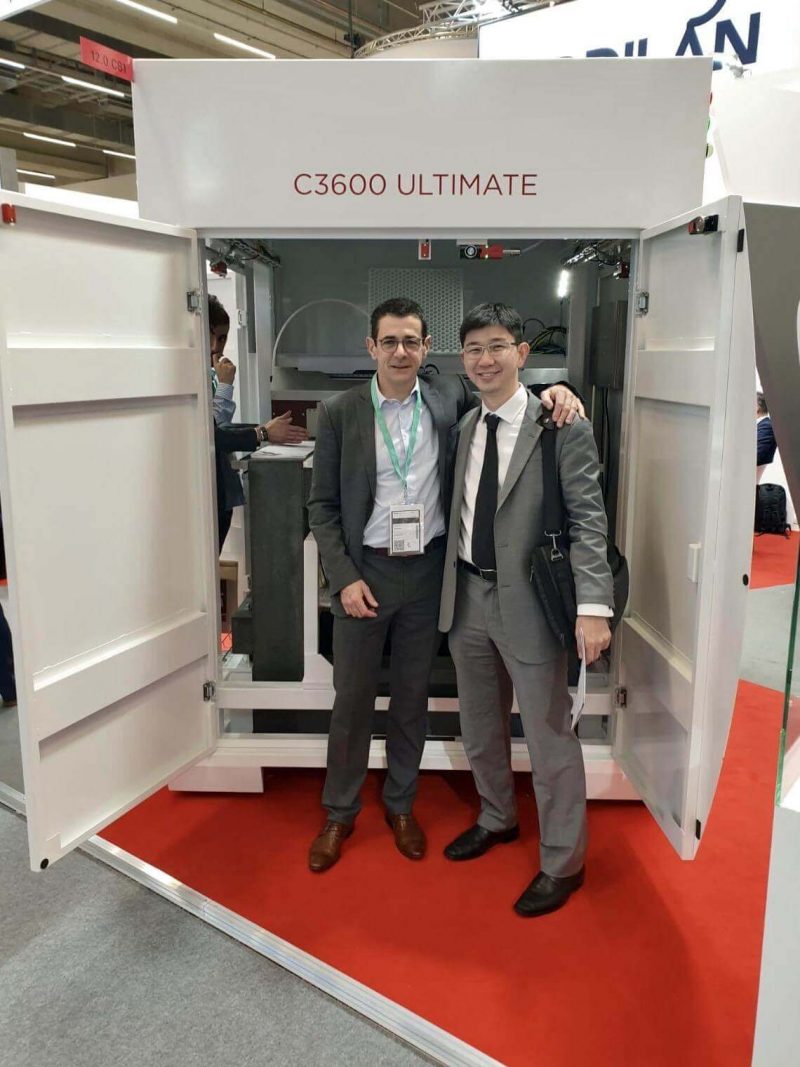 The video that you have on the website gives very little information about how the printer’s first impressions and so there is very little that you can know about the how would it look like when you are going to bring it to your workplace.

Another interesting aspect in which you can know how the parts and functional prototypes that the printer manufactures is by opting for the services that the company offers.

If you haven’t heard about the companies that offer 3D printing services, let us tell you that there are companies whom you can reach out to with your design files and then they would reach out to with a quote and if everything works well, you can place an order to manufacture that part or functional prototype to that company.

Since it’s an industrial-grade 3D printer 3D CERAM C3600 Ultimate must becoming completely assembled ready to use, just plug and set up and start printing.

The information that we have from the website of this printer manufacturer does not specify the packaging in which it comes and what steps do you need to exactly do to set up the printer.

These resins come in bottles that are initially offered to you with the purchase of a 3D printer from its manufacturer. The resins are of course filled with liquid material, with which you want to 3D print the part or functional prototype. The technique uses a Laser source to cure the material.

A lot has been said about the post-processing cost of the printer which is reduced when compared to other printers. So, the overall printing cost is also calculated to be lesser than others. 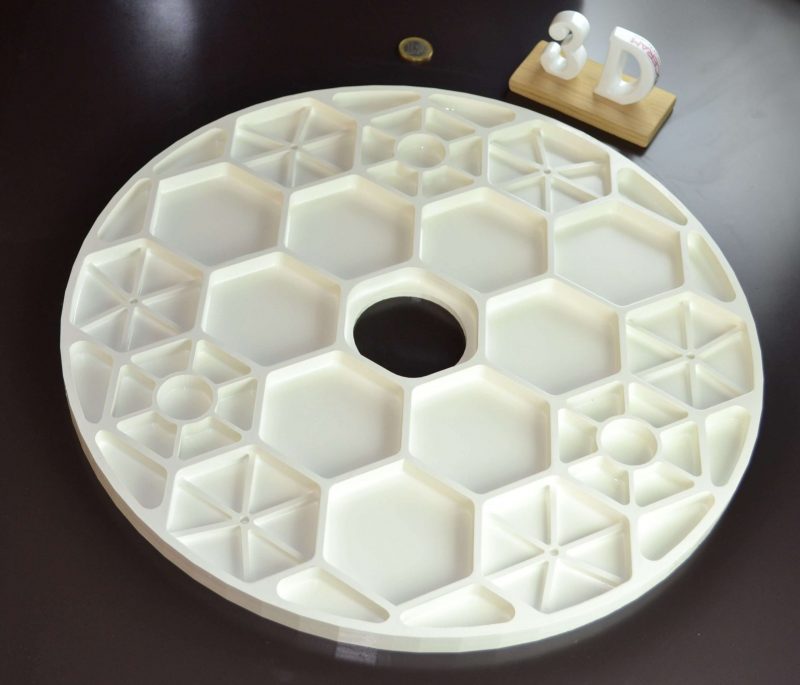 Generally, SLA 3D printing technology is said to produce parts and prototypes of higher quality than FDM 3D printing. So, if you have any experience in FMD 3D printing you probably know

the layer visibility in the parts produced by that technology and can expect this printer to at least produce parts and functional prototypes of superior quality. 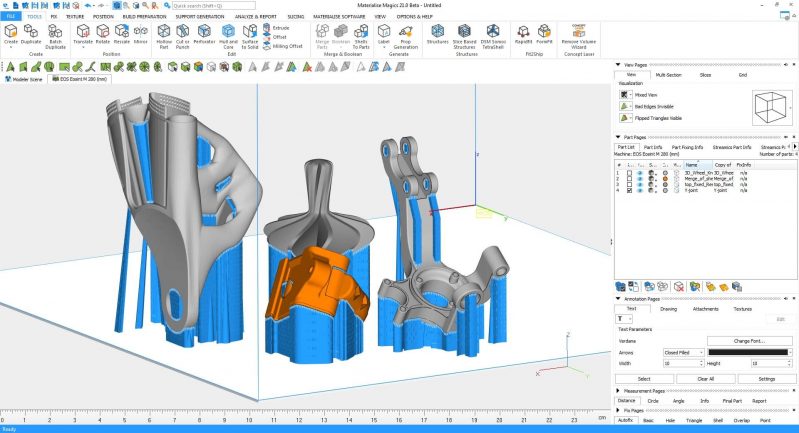 There is a specific tab on the manufacturer’s website titled Service. This tab has three options:

When clicking on the first option you get to know how the company offers training and commissioning on-site. There are service packs offered by the company and you can contact the company as mentioned on its manufacturer’s website.

Let’s quickly recap the factors that are arguably the most influencing your buying.

3D Print Quality: Definitely you would have a part at the end of your printing process which has less layer visibility than FDM 3D printers available in the same price range.

3D Print Speed: One of the highest in the industry.

3D Printer Practicality: Ceramic parts of greater build volume in the areas of aerospatial, industrial, biomedical, and luxury goods can be 3D printing using this printer.

3D Printer User Expectations: Industrialists are going to have all their expectations satisfied with this printer.

Since the company has a product offering in small business owners range and academic institutions range, you can only opt for this printer if you are an industrialist who has a mass requirement of ceramic 3D printed products.