If you are considering the 3D printing industry as a field in which you would like to experiment for long-term enough to let it become your career, this printer will help you learn the basics as well as implement it in making parts or functional prototypes. It is affordable in price, has a simple design, as well an un-complicated mechanism.

Manufactured using Aluminum and PMMA, the Delta WASP 2040 Pro is powerful as well as versatile with steel-cored belts that cannot be deformed. 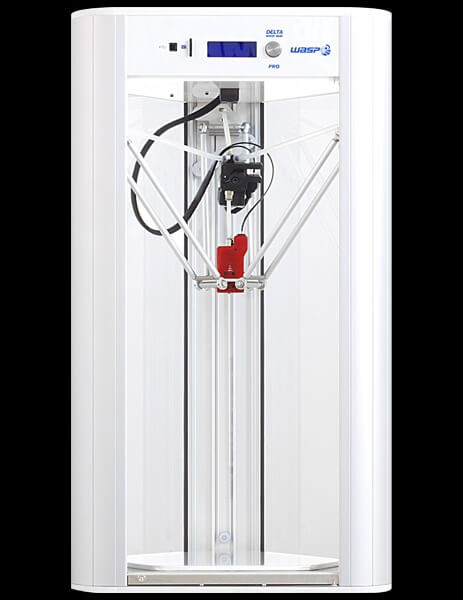 It is a powerful 3D printer that is one of the fastest ones at printing parts and functional prototypes in the complete 3D printing market as per the claims made by the company.

Let’s have a look at various aspects of this printer in depth.

The printer is known in the market for having its own set of unique selling points.

Delta WASP 2040 Pro has a system of autocalibration, rectified printing bed, as well as some of the best performances for printing parts and functional prototypes especially while in batch production.

Below mentioned are some of such unique selling points and their explanations that sets it apart from others in the field as well as make it more attractive.

The simplicity of this printer is something worth noticing and appreciating. For it is not something that you get to see commonly in the market.

This is a recovery system for any printing system that has been interrupted for many reasons and the recovery was not possible.

It is even for those systems which were found to be inefficient after they were recovered.

The Free Zeta system of Delta WASP 2040 Pro allows users to print a file starting from an accurate height of the model to be printed from the previously selected height.

You’d have to select the Free Zeta System from the menu and there you are recommended to mention a certain kind of height.

After the selection has been made, the menu goes into automatic visualization of the files inside the SD card, this enables you to choose the file for 3D printing.

The then selected file will be scanned as well as performed in all the commands such as temperature, level, extrusion, ventilation, and a lot more.

After having reached the set height, the printer will start moving again, according to the chosen height.

What this essentially means is: if you have a printing plate wherein there exists a partially printed model, after you take a note of this height, it will be possible to go on even without recovery data.

This is the feature of the printer that stands out from other printers in the same price range.

500 mm per second is a print speed that WASP 2040 Pro provides while printing parts and functional prototypes, which is unmatched in the 3D printing market that is present in the same price range at which WASP 2040 Pro is available.

And an important thing to note is, that even while printing at such a fast speed, it does not lose the print quality.

The printer is able to offer layer thickness/print precision of 0.5 mm. Other printers do provide good print speed but at the cost of quality.

The feature helps your attempt not result in a print failure, by pausing the current print job when the printer runs out of the filament, giving you time for loading the filament spool again.

It is important to note that, by notifying you of the filament run out, the printer manufacturer has also saved you some time of finding out which part of the printer’s problem needs to be saved when the printing pauses.

Otherwise, a lot of the time when the printer pauses, you have to check four to five aspects, sometimes even more, before reaching the result that it is the filament that needs to be loaded again.

For ensuring that the flexibility of users of WASP 2040 Pro, the printer manufacturer has kept the build plate material of this printer Aluminum.

This has been an upgrade, previously steel was used in making the build plate. But Aluminum provides better thermal properties and also improves print adhesion.

A lot of the headache while starting to print a fresh part from start is in adjusting the nozzle height to print the bed.

If this is to be done manually, it can or cannot be precise according to the 3D design of the part or functional prototype.

But because the printer manufacturer of WASP 2040 Pro has kept it automatic, the users have to undergo no headache which they have to if the system were manual. 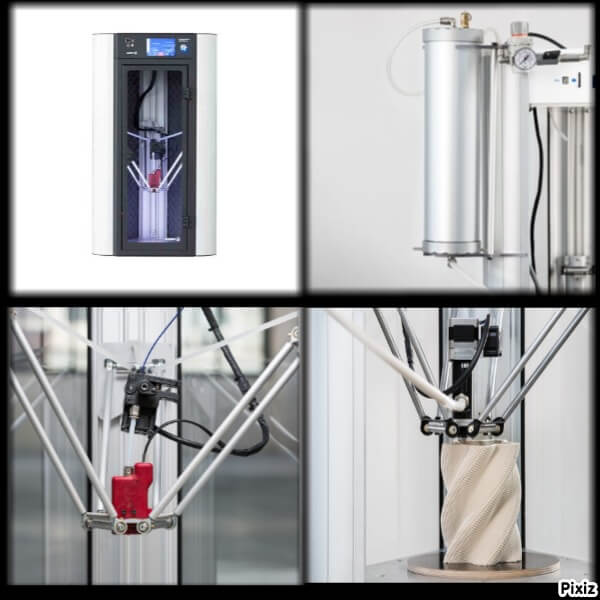 The printer’s build volume is 200 mm * 200 mm * 400 mm, it offers a minimum layer height of 50 microns, whereas the print speed for printing a part or functional prototype is 500 millimeters per second.

You will be able to print with printer materials that melt under 110 degrees Celsius because the printer bed can withstand a maximum of the above-mentioned temperature.

The standard nozzle diameter of this printer is 0.4 mm, spitfire Rosso with an LT cartridge.

WASP 2040 Pro is suitable while printing with PLA, PETG, PA Carbon, as well as ABS, all of which should have a 1.75 mm filament diameter.

For ensuring the printer starts printing, the electricity of 220 to 240 Volts, 50/60 Hertz needs to be given.

It is recommended to use this printer in the temperature range of 20 to 30 degrees Celsius.

Delta WASP Pro is based on FDM 3D printing technology and has an automatic platform leveler.

The price of Delta WASP Pro is $3211 and it can be bought from the printer manufacturer’s website. 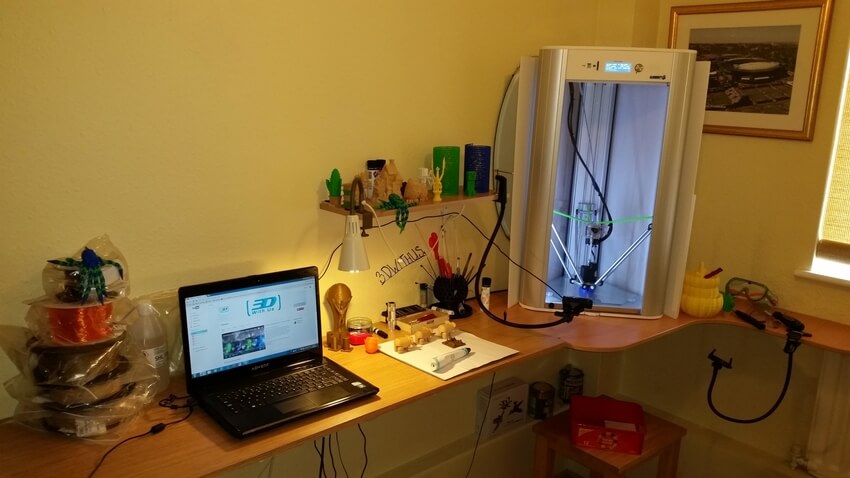 Three pillars standing tall from the ground are connected with each other, forming the rails that are necessary to let the nozzle system of the printer meet its print bed.

There is a display at the head of the printer, with a circular button. The frame and cover of the printer are made up of Aluminum, polycarbonate, and PMMA.

The print bed of this printer is made up of rectified aluminum that allows maximum adhesion after a part or functional prototype is printed.

For ensuring there is a smoother movement of the print head, the nylon wheels on anodized aluminum sliders, and steel cored belts in TPU resistant to high temperatures are all present.

Coordination between them results in such a high print speed that is unmatched in the 3D printing industry.

All the motors used in the application are stepper motors, that allow the nozzle system of this printer to come against the gravity layer after the other while printing an object.

The printer comes completely assembled and all you need to do is give the electricity to start your first print on this printer.

However, before starting, it is recommended to go through the manual that comes with the printer.

Doing so would let you get familiar with various parts of the printer and their functionalities.

You can also refer to the manufacturer’s website in case of any doubts regarding the printer.

Also, there is a lot of material available online that you can refer to, for the same.

The printer operates on FDM 3D printing technology. It is a technology in which a part or functional prototype is printed using solid filament material.

This filament is made to reach its glass transition temperature in the extruder.

Till the time this is done, the print head of the printer ensures the nozzle travels enough distance to reach the print bed of this printer.

After that is done, the liquid filament is spilled over the print bed of this printer in a fashion that is mentioned in the 3D design.

The print cost of a part or functional prototype is lower than it is for the one that is made from other technologies than the FDM 3D printer.

However, there are a lot of factors that determine the print cost of a part or functional prototype which should be taken into consideration.

The list of these factors includes the amount of infill, electricity, the mechanism used for 3D printing, etc. 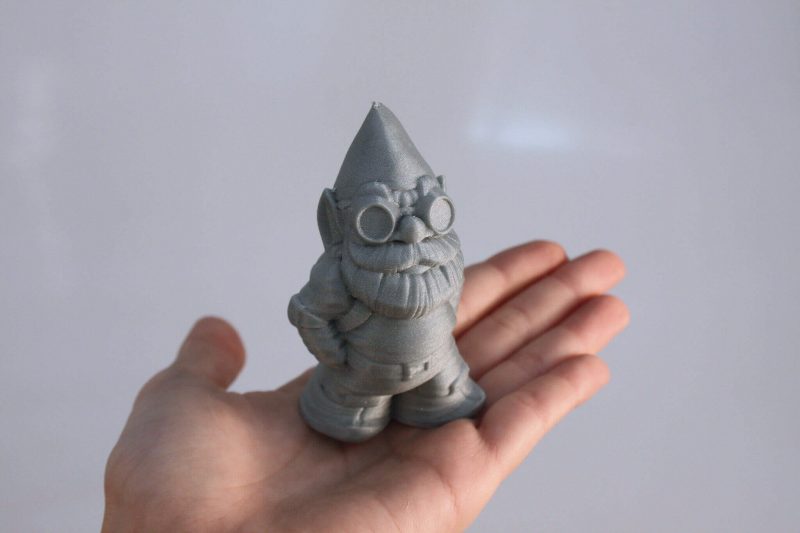 The minimum layer height offered by the printer manufacturer in each and every part or functional prototype manufactured using this printer is 50 microns.

The pictures displayed on the printer manufacturer website show commendable accuracy even in small and intricate parts or functional prototypes, such as showpieces, engineering models, etc.

So, overall the print quality is above the industry standard that is available in the printers falling in the same price range as this one does.

Cura, Simplify3D as well as Slic3r is compatible with the printers. Any one of this software can be used with your device that operates on Windows, Mac, and Linux.

You can connect with this printer using an SD card. The software excepts file extensions such as .stl, .obj, and .gcode.

Delta is known for offering high-class technical support to its clients. Its team of technical experts is there to entertain your doubts regarding parts of this 3D printer as well as its functionalities.

Apart from this, the company’s team can be reached out via phone, email, or Skype.

While you are probably looking for a comparison chart that can be used for finding out the best 3D printer, the below-mentioned factors, in brief, will help you compare this printer’s aspects with other printers’.

3D Printer Speed: 500 mm per second is a print speed that is extraordinary especially considering the price range in which this printer falls.

3D Printer Capability: You can print using various filaments on this printer, thanks to its print bed that can withstand the melting of 3D printer filaments up to 110 degrees Celsius.

3D Printer Practicality: This printer can be used in various business sectors such as medical, dental, jewelry, automotive, etc.

3D Printer User Expectations: Small business owners, as well as educationists, are the two primary areas that will love operating with this printer because of its low cost and simplicity in operation.

If you are considering the 3D printing industry as a field in which you would like to experiment for long-term enough to let it become your career, this printer will help you learn the basics as well as implement it in making parts or functional prototypes. It is affordable in price, has a simple design, as well an un-complicated mechanism.