Some of the main features of the printer include high productivity and precision, joined by a wide range of materials. These features make this printer versatile and suitable for almost any kind of industrial application

The manufacturing company of the printer describes it as an innovative DWS 3D printer used primarily for manufacturing.

XPRO S, as per the claims made on the webpage dedicated to the printer on the website is the ideal choice for companies needing to produce in a short time very huge quantities of models and big objects with optimal results.

Some of the main features of the printer include high productivity and precision, joined by a wide range of materials.

These features make this printer versatile and suitable for almost any kind of industrial application.

In this article, we are going to talk in detail about the various aspects of the printer starting from its features.

Apart from the features mentioned above, the printer has some amazing points that will make you wonder about its efficiency.

They are mentioned and explained below.

The printer can be operated just like you do your Smartphone i.e. via a touch screen interface.

So, say you wish to stop the printing in the middle; you can do that using the integrated touch screen interface of the printer.

The command for automatic bed leveling, the status of the print head during the printing process and a lot more can be done using the integrated touch screen interface.

Basically, the complete operation of the printer, as well as the monitoring, can be done using this touch screen interface.

Users’ complete interaction will be friendlier than ever using this touch screen interface.

DWS X Pro S’ manufacturer claims this is an important feature of the machine.

Normally the printers using SLA 3D printing technology are known to have more running costs than FDM 3D printing as they do not need a laser source for printing a part or functional prototype.

But the claim made by the manufacturer makes us think whether the low running cost of this printer is lower than the FDM 3D printers or other SLA 3D printers and what is the exact reason for them being lower?

. So, unless you experience for real, you would not be able to prove in favor of or against the claim made by the company.

For a long time, the main challenge in SLA 3D printing printers was the build area.

With printers such as DWS X Pro S, it is now possible to hit at the build area which only FDM 3D printers could otherwise.

So, the working area of this printer does matter much if you are a lover of SLA 3D printing technology.

It does satisfy your long term need for printing with a build area that most SLA 3D printers fail to provide.

This technology includes an electromechanical device that can automatically move the resin tank during the printing process.

Essentially it allows local consumption of the reservoir to be reduced by laser beam irradiation in the same tank area while increasing its durability and efficiency.

Also, it allows quick exchange of material easily and safely which is a very big achievement.

Additionally, it decreases the overall printing time of one part or functional prototype by increasing the speed at which one can print using this printer.

The Galvanometer scanning method helps in decreasing the overall print type of a part or functional prototype. It allows for rapid modeling with high accuracy.

The Galvanometer scanning method allows the highest building speed and accuracy and is adopted by all XFAB, 028J Series, 029J Series, 029XC, and XPRO Q printers.

After having stated and explained the DWS X Pro S features it’s time to look at the Specifications of the printer. 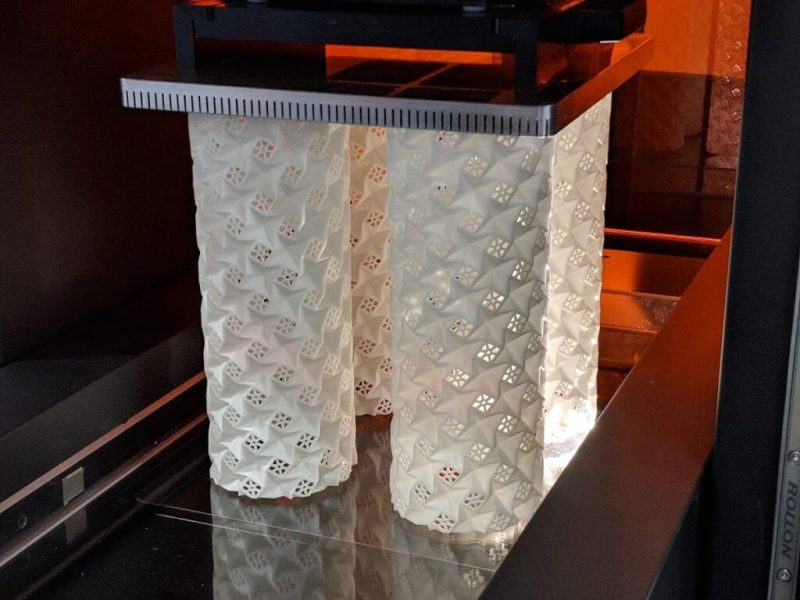 Parts and functional prototypes that are built by the printer have a slice thickness range of 10 to 100 microns depending on the type of material that we use for 3D printing technology.

Whereas the recommended operating temperature range of this printer is 20 to 25 degrees Celsius and the humidity range is 60 percent.

DWS X Pro S’ electrical consumption is 500 Watts and the minimum requirement for a PC is Windows 8 or higher with a memory of 4 GB.

This printer is compatible with a graphics card OpenGL 2.0 compatible or above, the input-output interfaces of this printer are 1 USB port – 1 Ethernet TCP/IP port, and connectivity is possible using 1 Active internet connection.

That is all for the specifications of the printer, the next section would let you know about the price of this industrial 3D printer.

There is no information about the price of this printer on its website.

You can fill the form that the company tells you should fill to get more information. Apart from this, you can contact the company. 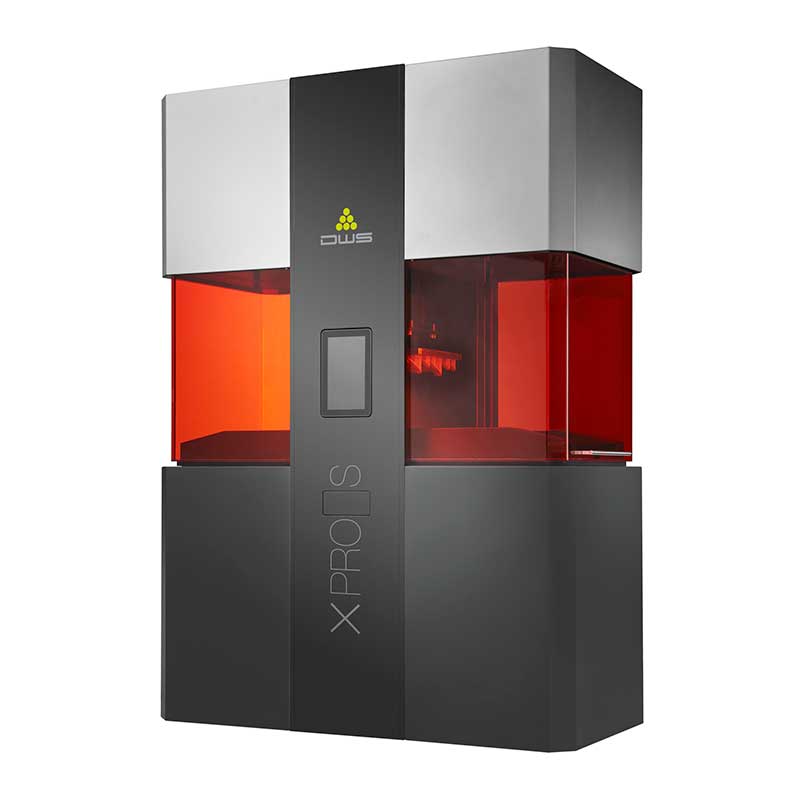 The X Pro S stands all in the pictures posted on the webpage dedicated to this printer on its manufacturer’s website.

The left and right ends of the printer have two transparent areas in the body which lets you get a peek into the inside mechanism of the printer and how the printing process is taking place inside it.

That is all we could catch from the photographs of the printer posted online on the manufacturer’s website.

This one does not look like a refrigerator that you have at your home, because it is too huge to make up for one. In the next section, we are going to talk about setting this printer up at your workplace.

Before starting your printing process with the printer, you need to get many things correct.

The first and foremost is to gain knowledge about all the parts of the printer.

Since the printer is no desktop 3D printer, it comes pretty much assembled.

So do you not have to wait for assembling it, all you need to give to the printer the input of electricity and that’s it, you are sorted.

But before starting to print, it is recommended that you get information about the software too, from the website.

When the process of SLA 3D printing starts the laser inside the printer draws the first layer of the print into the photosensitive resin material for 3D printing of part or a functional prototype.

Wherever the laser hits, the liquid photosensitive resin solidifies to form a layer.

The laser is directed to the appropriate coordinates by a computer-controlled mirror.

Most desktop SLA printers work upside-down, but this one is an industrial 3D printer.

So, the laser is not pointed up to the build platform, which starts low and is incrementally raised.

The cost of printing per part in this 3D printer is greater than that it is a desktop 3D printer or any other FDM 3D printer. 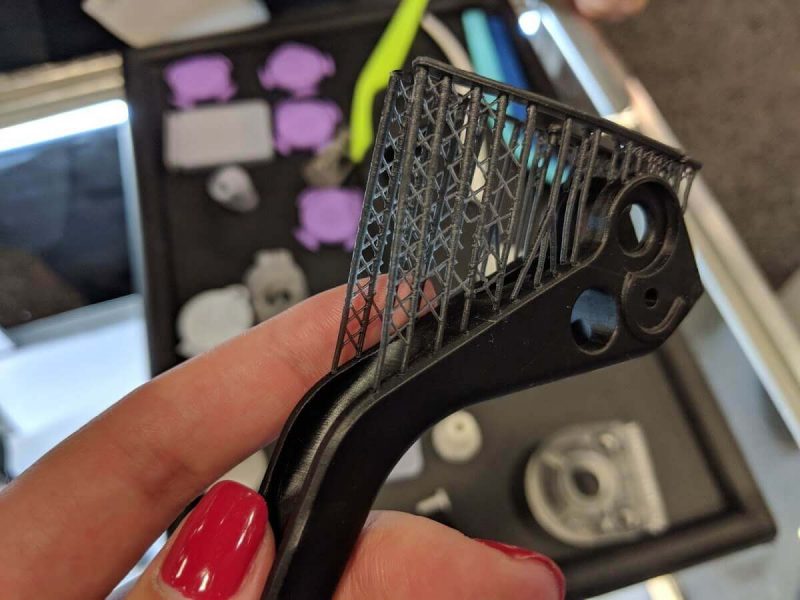 A tab called DWS Stories is present just before Contact Us, dragging your mouse on this tab would let you know about the parts or functional prototypes manufactured by various DWS 3D printers.

Clicking on any one of those would lead you to the webpage that would display in detail how that part came into being. 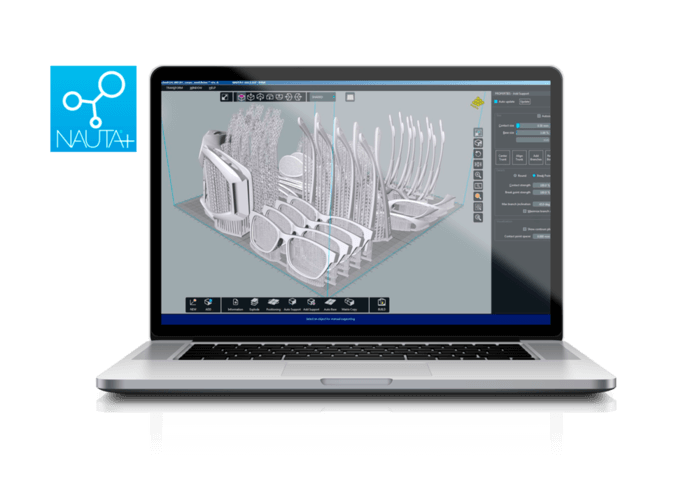 Nauta, DWS’s parametric software, is used for preparing files not only for 3D printing but also for scaling and copying models.

It is also used for preparing positioning on the build platform.

This is multipurpose software that you can use also for predicting the amount of resin that will be consumed for building a single part or functional prototype.

According to the Business Development and Key Account Manager, the software, allows for automatic or manual support generation. It features a patented easy support removal workflow.

Parts and functional prototypes that have most of the support attached did indeed show in the software where the connections were easily pulled away only small dots remain at the patented breakpoint.

This eliminates the special tool use for removal and minimizing the need for heavy post-processing for removing telltale signs of support attachments.

After the preparation for building a part or functional prototype is done using Nauta, the file is sent to DWS’s management and control software, Fictor.

Users can select and configure print parameters like layer thickness, contours, as well as select the material settings in Fictor.

When you click on the Support tab on the website of DWS, the webpage that opens on your screen brings to you five FAQ options and two videos.

Those five options are:

The videos are titled 3D Printed Surgical guides and Nauta + – DWS. You can read out the FAQs and see if the doubt that you have about the printer is answered in them or not.

If the doubt is not cleared in these FAQs you can simply contact the company.

This can be done by getting a contact link to the company by clicking on the Contact Us tab. The phone number as well as an email id would be visible to you.

A summary of the complete article is made in the points mentioned below.

3D Printer cost: The price of this printer as mentioned on another website than the manufacturers comes out to be $136000.

3D Print quality: It is pretty impressive to see a company keep such detailed information about the parts and functional prototypes manufactured by its printers.

3D Print speed: There is no detailed information about the print speed of this printer, although the speed should be above average as it is an industrial-grade 3D printer.

3D Printer User expectations: Users who were in search of a printer that can give them excellent results for on-demand printing would be satisfied, along with the manufacturers in the field of 3D printing technology.

The XPRO S, as it can be noted from the website of the printer manufacturer, is targeted toward applications in prototyping for industrial design and for functional parts.

As seen in the sections of the article, the machine’s large size and high productivity are designed for use in R&D departments, professional lab settings, medium and large companies that give services of on-demand 3D printing.