Envision Tec Perfactory P4K Series delivers parts with an excellent surface finish in minimal printing time. If designing smaller geometries with intricacies is your goal, these printers are definitely worth your go-to.

There are four printers that fall under P4K Series: P4K 35, P4K 62, P4K 75, and P4K 90. All these machines are made to impress and come with various advanced features for making your production runs an easy routine.

So, here is an in-depth review of Envision TEC Prefactory P4K series. Read the complete article to understand why these printers are best suited for your applications and needs.

Economic material Use With No Vat

This is a rare feature that you will hardly get to see in any DLP 3D printers of the same price range as Envision TEC Perfactory P4K Series is.

Considering the environment and eco-friendliness factor in mind, the printer manufacturer Envision TEC has made sure that the material you use for 3D printing, is made of no vat.

Vat resins typically are known to be poisonous. And therefore, when dealing with them, you need to be 100 percent sure of their harmful effects. All the materials that these printers under P4K Series do not make use of vat, thereby making them eco-friendly in use.

Often you would encounter DLP 3D printers that make use of many components just to enhance the overall quality of a part or functional prototype. But with increased components, the overall serviceability of the printing system increases which leads to a lot of maintenance for any user.

So, in the long run, you will have to clean, manage and service lesser components. Yet you can achieve the same functionality that other 3D printers making use of the higher number of components provide.

Designed to Run in 24*7 Work Environment

In terms of functioning capacity, the printer is no less than a beast. It is designed by Envision Tec’s technical team to run in all day long work environment.

Being a 3D printer that’s able to produce build volumes of smaller parts, it is no less than an industrial 3D printer working day in day out.

Its capacity can easily be compared to any industrial 3D printer which is available at a price range way higher than that of this 3D printer.

The software that P4K Series is compatible with gives the printer complete automatic support for generating dimensionally accurate parts or functional prototypes. Such software is very non-technical in use and even lets the first-time user get a complete hold of it.

Moreover, the tools that are present in the software let you completely customize an object according to your vision.

The software has advanced tools like automatic support generation and perfect model production which takes care of the minute level intricacies that are present and part of any kind of small part production. So, playing with Envision Tec Perfactory P4K Series is very easy.

Material Changeover Can be Done Quickly and Easily

The resins used for the production of parts and functional prototypes can be easily changed from one to the other. Regardless of whether you are changing the same resin because of its completion or changing one resin to the other because of material change.

The construction and complete arrangement around the resin feedstock are such that allow you to not waste and increase your overall print time because of changing the resin material.

Resin being a liquid substance, it cannot be changed quickly and easily without any hassle, but the Envision Tec has taken the correct amount of care by keeping the construction highly modern and functional. So, you are benefitted with the ease in use of the same.

There are four different build envelopes available under P4K Series which are:

All the printers under P4K Series utilize a true 4K projector with UV optics tuned to 385 nanometers wavelength.

They deliver the highest accuracy as they are coupled with the highest finished product functionality because they utilize Artificial Intelligence in pixel tuning for delivering high-quality surface finishes.

The data handling is done via STL format files. The printer has a warranty of one year included at the time of purchase.

To know the exact price of these P4K series 3D printers, you must contact the manufacturer for the same. 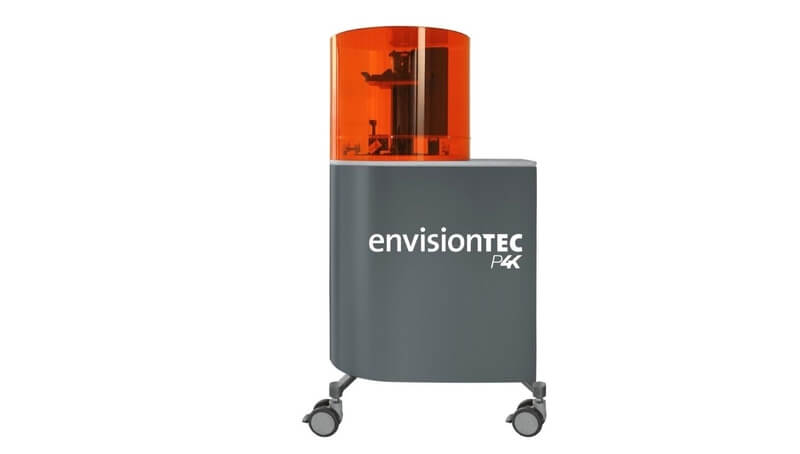 The first glance over these printers will let you know that they are definitely different from other 3D printers that you must have seen by now. Making use of curvy edges instead of sharp ones, the manufacturer has come up with a unique design.

The print chamber is fixed on the platform kind of a structure that can be taken from one place to the other via a wheel-driven base.

This print chamber has neon-type transparent material which makes monitoring of the 3D printing process happening inside the print chamber possible.

When talking about the construction of this 3D printer, it is just like any other DLP 3D printer. I.e., the bottom of the frame consists of Projector, which emits a Light beam or matrix onto the resin vat thereby focusing the image on the build plate.

The printer is completely ready to 3D print when you receive it. All you need to do is read the manual before starting your 3D prints. This is so that you can get comfortable with various parts of the printer and understand their functionality.

DLP stands for Digital Light Processing, it is a type of vat polymerization 3D printing technologies, the other example being SLA 3D printing.

Here, unlike an FDM 3D printer, a liquid photopolymer resin is cured or solidified under a light source. The only difference between SLA and DLP is the use of the light source used for curing the part or functional prototype.

Machines based on SLA technology have to individually cure the resin using a point-to-point technique. On the other hand, the DLP projector screen flashes a complete image at once. Thereby, curing all the points of the layer at once.

A result of this is increased speed. DLP is a digital technology wherein the 2D image that is projected is made up of pixels. So, when they are translated into 3D, they become voxels.

The light source of a DLP 3D printer is an LED screen, meaning a digital micromirror device that is the heart of every DLP chipset.

Every DMD used in a 3D printer contains hundreds of thousands or sometimes even millions of small micrometers that direct the light and create a pattern of a layer onto the bottom of the resin tank. 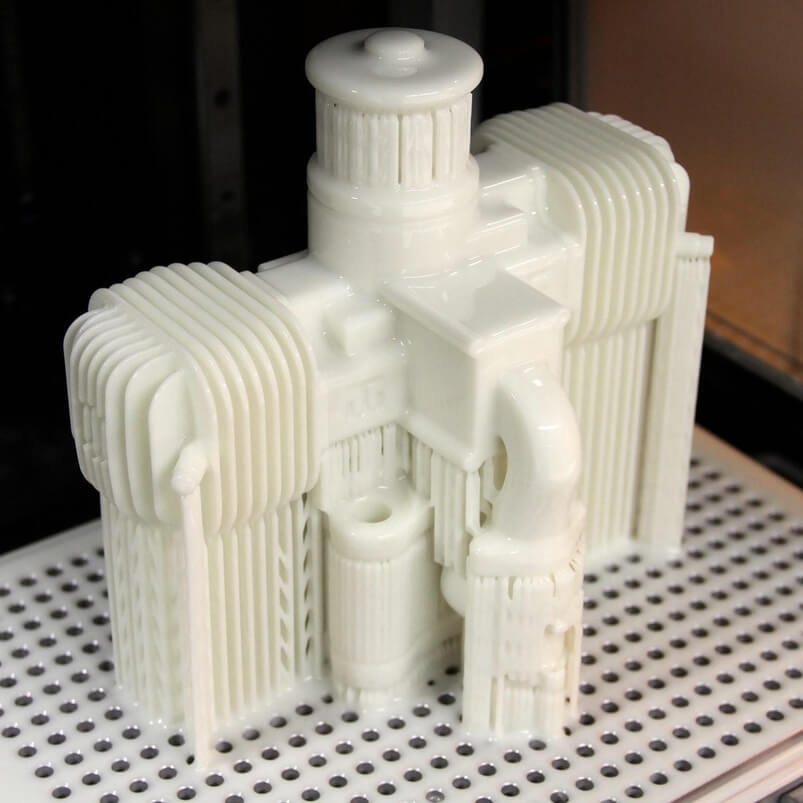 It is obvious that the more the number of pixels, the detailed the quality of your print. And the dynamic voxel resolution range in the Z-axis is from 25 to 150 micrometers depending on the material that you use for the 3D printing part or functional prototype using Perfactory P4K Series.

It is to be noted that the company gives you enormous options in terms of materials for 3D printing an object on the printers.

Parts made from these materials find their use in industries such as Aerospace, Entertainment, Automotive, Jewelry, Hearing Aid, Consumer Goods, Education, Medical Devices, Manufacturing, and Orthodontics.

All the printers of Perfacotry P4K Series make use of Envision One RP software. It translated 3D models into printable files for the 3D printer.

You can design your model in standard CAD software, then import the STL files into Envision One RP Software.

You can then prepare your model for printing with one click of a button, upload it to your printer and let the Envision cDLM do the rest.

You have multiple options of support with Envision TEC. There is access to Support Center online, you can request assistance with their printers.

Apart from this, you can gain access to the white papers, live training, and renew the license from time to time.

The company’s technical team offers world-class support to all its customers via email and phone.

The most important points that are worth having a glance at while buying the 3D printer are mentioned below.

3D Printer Cost: You will have to request a quote to Envision Tec for knowing the price of Perfactory P4K Series printers.

3D Printer Quality: All the parts or functional prototypes manufactured with the printers have a dynamic voxel resolution ranging from 25 to 150 micrometers.

3D Printer Capability: All the printers under Perfactory P4K Series have the capability of 3D printing a lot of materials as mentioned above.

3D Printer User Expectations: The printers stand upon the expectations of intermediates and experts in the field of 3D printing.

Envision Tec Perfactory P4K Series delivers parts with an excellent surface finish in minimal printing time. It’s equipped with best-in-class UV optics tuned to 385 nanometres wavelength. If designing smaller geometries with intricacies is your goal, these printers are definitely worth your go-to.