MakerPi K5 Plus is a great gift for small business owners that are looking to make it big in the field of 3D printing. It is excellent for those who wish to study this subject and for those who want to experiment with this technology. Maker Pi K5 is also preferred by professional 3D designers.

This printer was launched in the year 2018, specially designed basically for smooth and continuous printing and material compatibility. It supports ...
Add to wishlistAdded to wishlistRemoved from wishlist 0
Add to compare
Check Price
MakerPi

Spatial Dynamics the manufacturer of this printer is also the distributor of 3D scanning and printing solutions. An attempt has been made by the company to spread 3D printing technology and made it accessible to everyone in the future.

This Spatial Dynamics make happen by bringing high quality and affordable products to its users, other consumers, and professionals in every field and industry in every part of the world.

Manufacturers can also connect with the company if they have a great 3D scanning or printing product. Spatial Dynamics is always forging and maintaining mutually-beneficial and long-lasting relationships. 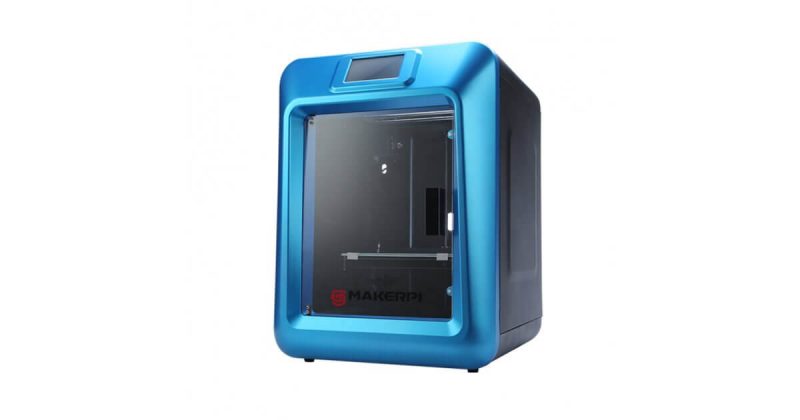 This goes for all their partners which the company claims to be like-minded manufacturers. The company also claims how they are always on the lookout for great products and innovations in the field of 3D scanning and printing technology to make it available to the masses.

It is a multipurpose printer that has many excellent features. In this article, we bring to you some of the in-depth details about features that MarkerPi K5 possesses, its specifications, print quality, and a lot more. So let’s dive in.

Maker Pi K5 has some of the most amazing features that you can imagine a 3D printer of the same price range to have. Below mentioned is a list of a few of those amazing features.

The fact that Maker Pi K5 has so, makes you want to rely on it as a 3D printer. There are other 3D printers in the same price range that do not offer the same build volume and lesser.

While operating on those printers, the trouble you would face is that while manufacturing a part of greater build volume, you’d have to assemble parts of it and then join it.

Whereas in Maker Pi K5 you do not have to do manufacture in different parts, instead you can manufacture on whole.

You can manufacture the complete part or functional prototype as a single complete part. So this is a huge advantage if you buy this 3D printer versus you decide upon any other printer.

Maker Pi K5 offers a resolution of 50 microns. Now what this means technically is that the parts and functional prototypes that you would decide on manufacturing with this printer would have smoother print finish and detailed prints.

Whilst if you print the same part on a printer that does not offer a similar resolution would not have the same finish as well as a similar amount of detail.

While printing parts and prototypes that need finer and minute detailing you to need a printer like Maker Pi K5 to help you with the edges and curves.

Instead, a similar printer at the same price, offering you a similar amount of resolution, is very rare to find.

Maker Pi K5 has a print bed made up of borosilicate glass. And this print bed can be removed. Now the obvious question that should come to your mind on hearing this is, how does it matter? Imagine you have printed apart and you want to take that out from the printer.

Since the 3D printer has an enclosed design, the part would be inside and you will have to open the door carefully to take out the part otherwise there are chances of damaging the part.

Think about it. You have the complete part ready in front of you but just because you didn’t pay enough attention to get it out from the printer, you damage it! How sad would be that?

This reduces the risk of damaging the part. Also, after you have removed the complete print bed, you can take it to a safer place and place it on a table and then remove it the way you wish to.

This the manufacturers of the printer are able to do because they have kept the modular design in the printer. The nozzle has a very important part to play in 3D printing of any part or functional prototypes.

So it is very important that Maker Pi K5’s makers have kept in mind this thing and availed the facility of using more than one type of nozzle.

Maker Pi K5 can be controlled using a colored touch screen. Instead of controlling the printer manually or through a button, it is flexible for the mind to associate with the touch screen, now that the mind has already learned how to do that, thanks to the mobile phones.

You do not need to be in a specific place to connect to the printer, you can be anywhere the Internet is available on your phone or another device.

Maker Pi K5 has a built-in camera. Now you may ask what role does this camera have to play in it? But, imagine the parts of the printer that you aren’t able to notice otherwise, appear on the screen of the computer that you are operating the printer with!

How cool that would be? Wouldn’t you stop any failure from happening after you notice it on the screen? So to monitor and control the print progress, this high definition camera is integrated into the printer. 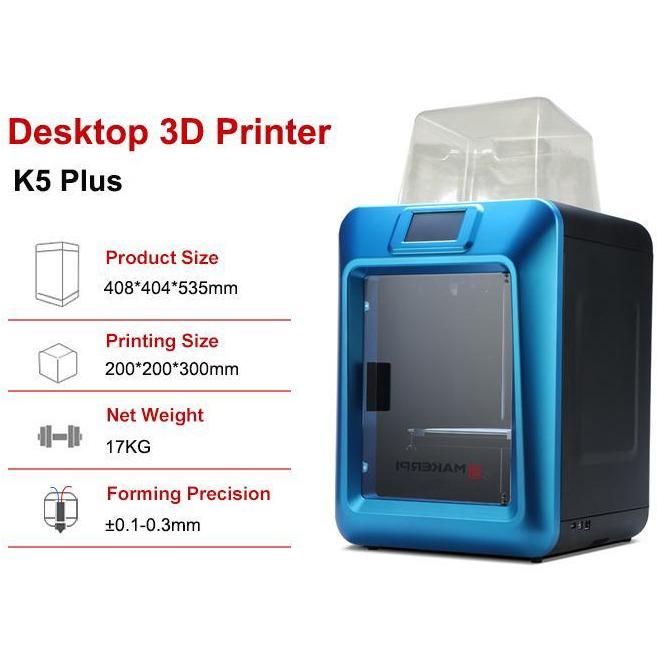 This printer is based on Fused deposition Melting technology so printing happens here layer by layer. The filament that is used for the material that you wish to manufacture with is melted.

The highest resolution of material is offered on the Z-axis, which is 50 microns. The maximum print size offered by this printer is 200 mm * 200 mm * 300 mm. Filament diameter of this printer is 1.75 mm and its cartridge capacity is 1 kg.

The printer is capable of printing with PLA, ABS, PHA, PETG, Nylon, PC, Flexible TPU, Carbon Fibre, Metal & Wood-filled. The nozzle diameters with which users can print using this printer are 0.4 mm, 0.2 mm, and 0.8 mm.

The maximum temperature that the nozzle of this printer can withstand is 280 degrees Celsius. The build platform of the printer is made up of borosilicate glass which can be heated up to 120 degrees Celsius.

On its website, the printer is priced at approx $800. You can select a regular cover as well as the cover with the HEPA filter. There are three types of nozzles that the printer comes with i.e. Hardened Steel, Flex nozzle, and Specialist Bundle. 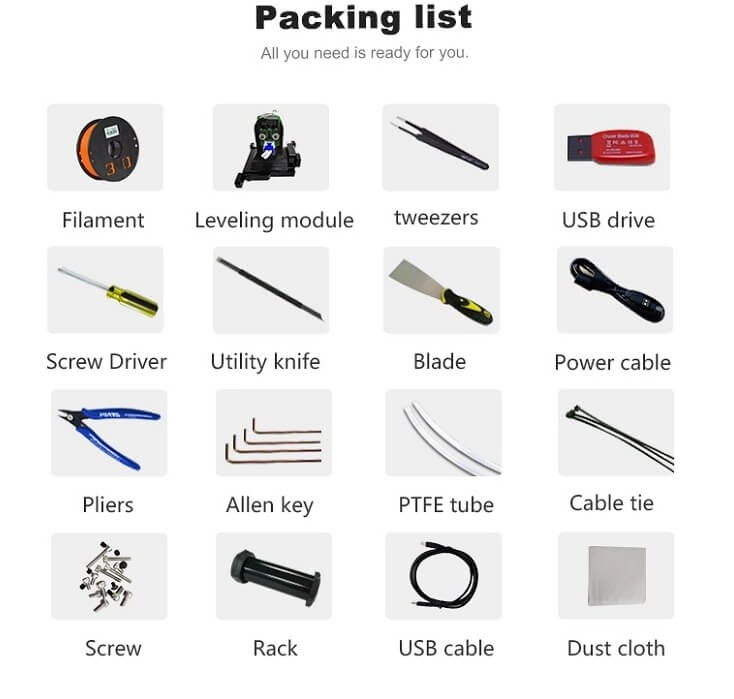 The first impression that we get from this amazing printer is that it’s an expensive suitcase. The perfectly rectangular suitcase that has its ends not sharpens.

A glass encasing keeps its apart from the world and yet connected to the eyes of the user so that they can monitor the print process and do something if something is going wrong in it.

Although you do not have a perfect handle to open this glass, you do have a white-colored clip to open this casing or cover.

The touch screen is present at the head of the printer’s body which adds beauty to the overall design. This printer is available in two colors, black and blue. 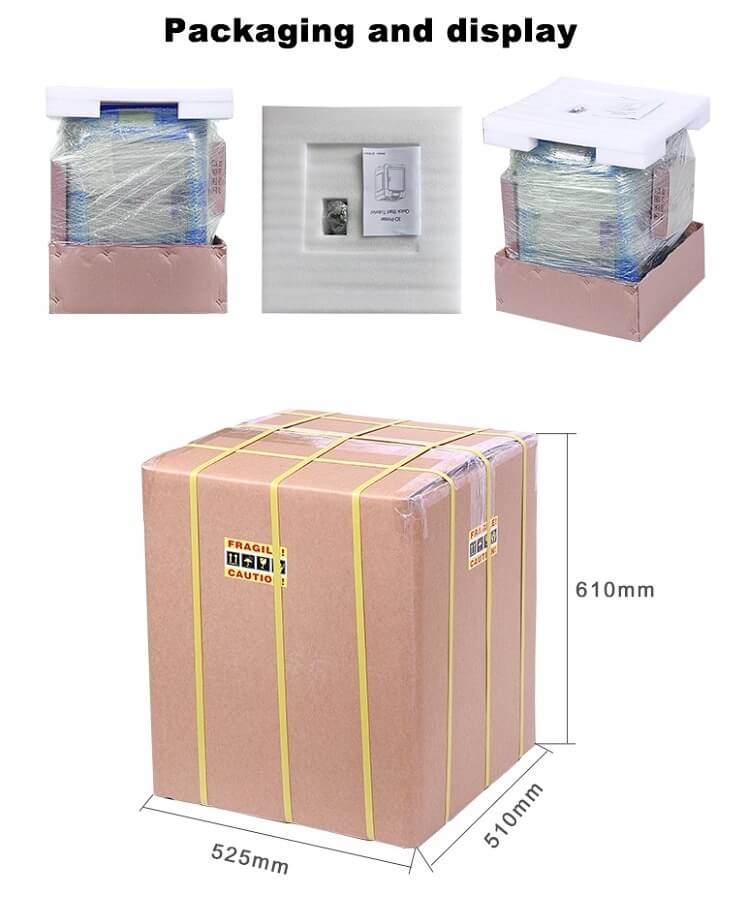 There nothing much that you need to do for printing your first 3D part using this printer. Everything comes done by the manufacturer. All you need to ensure is that you have read the user manual and call the company if you need any assistance.

The printer uses FDM technology so it comes with a filament that will give you a head start. And then you will have the material tray, date wire, power line, art knife, glass plate, spare screws, and a shovel. But the printer pretty much comes assembled.

Fused Deposition Melting is the simplest type of 3D printing technique; it is also the oldest techniques used for 3D printing. Here there is a filament in which there is the material with which you wish to 3D print.

After melting this material is laid layer after layer according to the instructions given to the 3D printer with the help of the software that works on G-codes.

The overall print cost of this printer is average, just like other 3D printers in the same range based on the same technology. Although it changes with the change in the material. 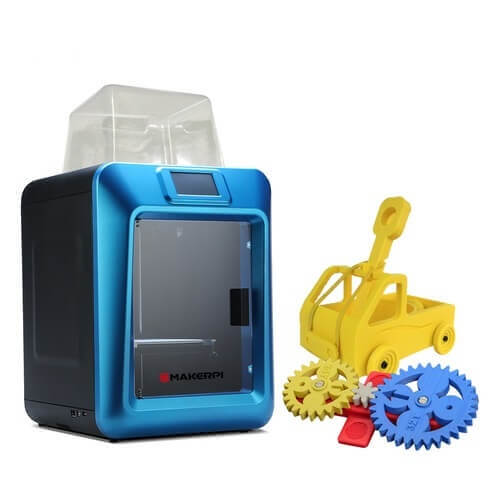 As mentioned twice in the article above that the printer produces parts and functional prototypes that have high resolution, so, the overall quality of this printer is industry standard.

It is as much as any good printer in the same range based on the same technology should have. You can part with intricate geometries using this printer. 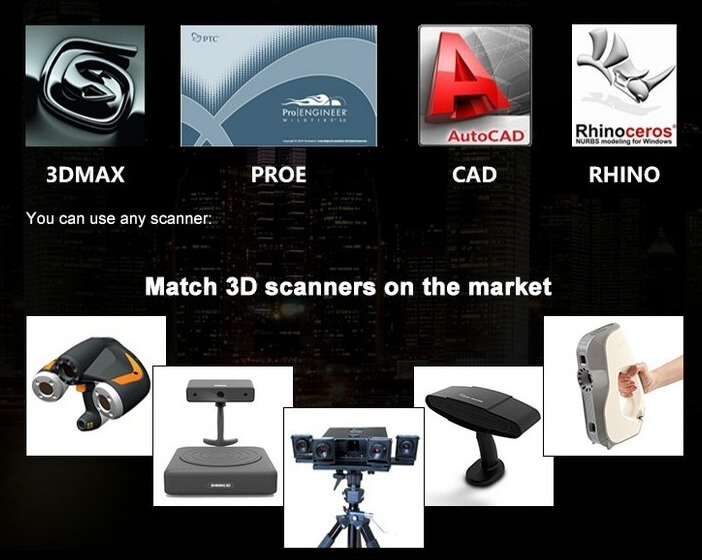 Maker Pi K5 recommends users to use Cura software. The operating systems with which users can use this software are Windows, Mac, and Linux. You can connect to this printer using Wi-fi, USB, and network port.

The team of Spatial Dynamics is there to help you with everything you need. All you need to do is call them to inform them about the difficulties you are facing with the printer.

Below mentioned are some factors that you must consider before buying this printer in brief.

3D Printer Cost: $1785 is a justified cost for a printer of this caliber.

3D Printer Practicality: The printer has its uses in various industries.

3D Printer User Expectations: The printer stands on every expectation that a small business owner of a newbie in the field of 3D printing would have.

Overall this printer is a great gift for small business owners that are looking to make it big in the field of 3D printing. It is excellent for those who wish to study this subject and for those who want to experiment with this technology. Maker Pi K5 is also preferred by professional 3D designers.

[year] SketchUp (CAD): All You Need To Know to Get Started