The Peopoly Phenom offers a print volume that is rarely seen in other desktop resin printers, so that is a super plus on the printer's side. The build plate of the printer is around five times the size of that of any average resin printer.

Being one of the biggest models available for home users, Peopoly Phenom lets you print parts that are 30.7 inches tall. The printer has a huge build ...
Add to wishlistAdded to wishlistRemoved from wishlist 0
Add to compare
Check Price
Peopoly

The company started as a personal project between two friends who enjoyed building 3D printers in the year 2015.

They built a few FDM 3D printers based on RepRap, Ultimaker, and other open-source designs.

While they learned a lot from the experience they gained by created several useful printers, their urge to create was not completely satisfied with the low resolution achieved from the FDM 3D printing technology.

So, to get even better details on the prints, they turned out their attention to the SLA 3D printers.

At that time, SLA printers that were laser-based weren’t as popular as they are now. That was the year wherein DLP SLA printers were more popular.

They set on a journey to challenge themselves for creating a laser or Galvo based SLA printer that prints great, but at the same time, is affordable.

That is the story behind the development of Moai. And this story is also mentioned on the company’s About Us tab.

In this article, we are going to share Phenom which is, as per the company’s claim “the most popular large format MSLA printer.” 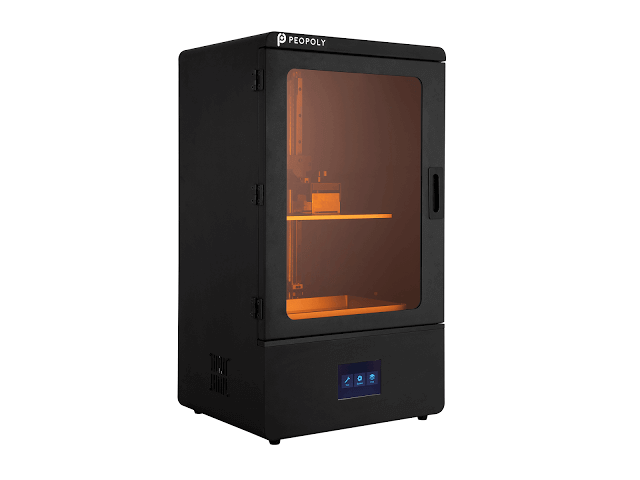 We are going to share the printer’s features, specifications, print quality, price, and many other aspects related to it.

So, if you were out in the market to buy a printer in the same price range and wanted to compare this printer with another one, you could do that with ease, using the spec comparison or feature comparison and make the correct decision.

Like every other 3D printer manufacturing company, Peopoly too has a website and a webpage dedicated to each of its printers.

Apart from Phenom, there is a webpage on Peopoly’s website for Noir, and L and you also see their names in the tabs next to Home, Store, Support, Blog, and Reseller tabs. However, it makes us wonder why isn’t there a Moai tab then!

Despite being a separate webpage dedicated to Phenom, the homepage is also stuffed with posts related to it. When you scroll down there are four videos related to the printer.

On the webpage dedicated to Phenom, you have a picture of this printer on the left which can be zoomed by getting the mouse’s cursor on the part you wish to zoom.

The list of pictures over there contains, a picture of Phenom with is a door open, left profile, right profile, front view, nozzle system, print bed, and a picture that has dots forming a square and a black part in the middle, resulting in a maze-like structure.

On the right side, you have a video that was the first one in the list of four videos that you can find on the homepage about Phenom.

The Peopoly Phenom has a part inside it which is a 12.5-inch wide 4K resolution LCD screen and there is a UV-LED panel underneath it.

Sandwiched between these two is a custom lens that is designed for distributing the light equally across the build plate where the part will be printed, and, according to the manufacturer, this arrangement will block infrared heat from the lamps.

The Peopoly Phenom is aired with a fan array and heat sink. The manufacturers of this printer have given a great deal of attention to putting into keeping operating temperatures consistently low for the LCD screen.

This is inherent because it is one of MSLA technology’s weak spots. When the LCD’s liquid crystals are exposed to heat over long periods of time, they deteriorate.

By using a large LCD panel and requiring more light to mask it edge to edge, a lot of heat is generated when the printing operation is going on in the printer.

The manufacturers have taken measures for prolonging the lifespan of the side panel with enormous fans.

The company has also formulated DEFT resin which works at a low curing-per-layer-time, shortening the panel’s exposure to light on a given layer. 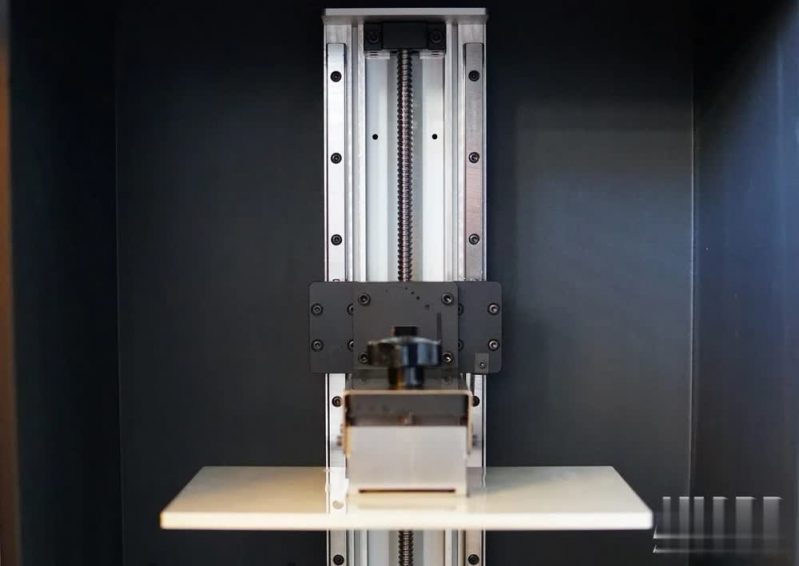 The print volume of Peopoly Phenom is 276 mm * 155 mm * 400 mm. The parts or functional prototypes it prints have layers on it, the resolution of which is 72 micrometers.

As mentioned above, this printer uses MSLA 3D printing technology for producing parts and functional prototypes.

The vat volume of this printer is 1.8 kilograms and it has 400 hours panel lifespan on average. The deft resin with which one needs to print is available in Grey and White colors.

The price of this printer is mentioned right next to the photographs of the printer on its webpage. $1999 is the price which is mentioned. 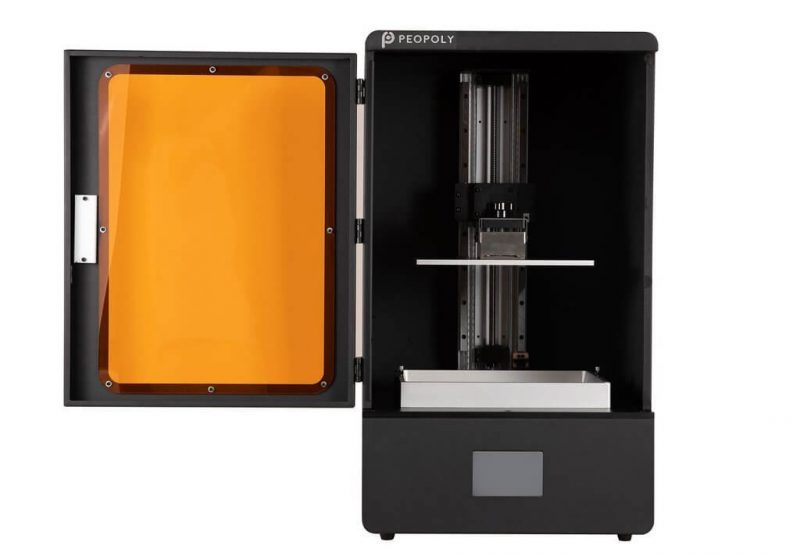 Seeing the Front view photo of this printer, we are able to know that the printer is divided into two compartments.

The upper part of the two compartments has a door that can be opened to reach out to the printer’s print bed.

In the photograph, the light inside the printer seems to be turned on because of which a showpiece of the part printed by the printer is exactly visible.

The lower compartment has a display screen from which it can be operated. In the photo the screen shows three options:

There is also a photograph showing a closer look at the complete nozzle system which is connected with the rails of the printer that operate according to the 3D design of the part or functional prototype you are looking to manufacture.

So, as soon as you print one layer, the rails make sure the nozzle moves one layer above the ground and then repeat the procedure for the complete part or functional prototype.

The setup of the Peopoly Phenom is pretty much as quick as other desktop 3D printers. The machine comes fully assembled so all you have to do is plug & play.

All you have to do is follow some basic steps i.e.

You will have to cover it onto a sheet of paper over the LCD screen and tighten it again at the level until the time comes when it is fully settled.

Do not rely on the leveling which is done before the Phenom is shipped from the manufacturers’ go down.

The transportation takes away all the leveling and you will have to relevel the leveling, but it won’t take much time.

Peopoly Phenom stands out from the Stereolithography technology that is used in the company’s earlier machines such as the Peopoly Moai.

There is a key difference, which is, where a laser SLA system traces every element of a layer in sequence for curing the resin, the MSLA instead exposes the entire layer on its LCD, using which UV light from an array of LEDs shines.

It effectively cures a single layer at a time, so, as you can guess, MSLA 3D printing is the faster technique for manufacturing large or more number of parts and functional prototypes than simple SLA. 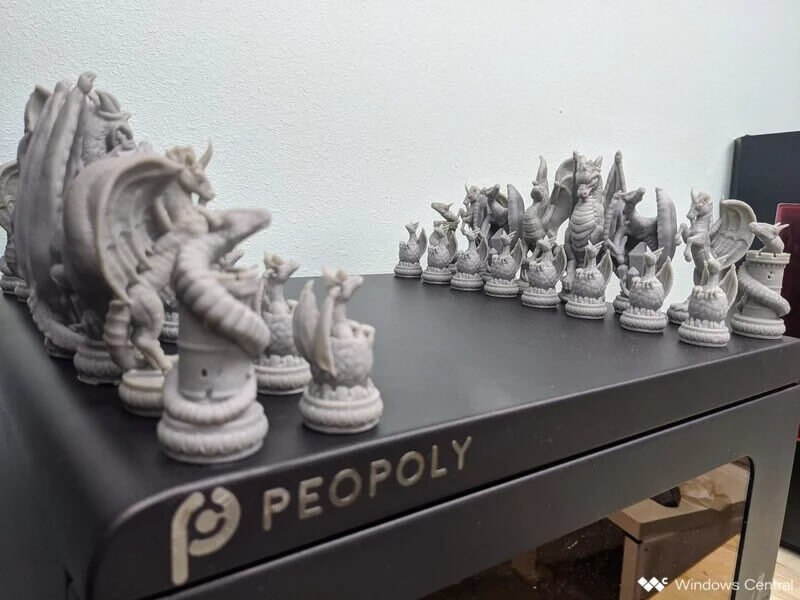 The websites that have got direct hands on the printer report about their test print which runs without problems, for 13 hours straight.

The printer is adept at handling the fine details of the grid very well, the edges of the cube printed using the DEFT resin bow out.

But things improve when you do a little bit of trialing and erroring on your part, including releveling the build plate, things are bound to improve.

Peel force is the suction effect that is exerted on prints each time the print plate separates from the bottom of the resin vat.

The manufacturer claims how its unique film processing technique reduces the bond between the hardened resin and the vat by lessening this peeling effect.

The Phenom struggles with print plate adhesion especially when you are printing large scale parts and functional prototypes.

The things that you need to take care of are:

The printer will produce the quality it claims to. 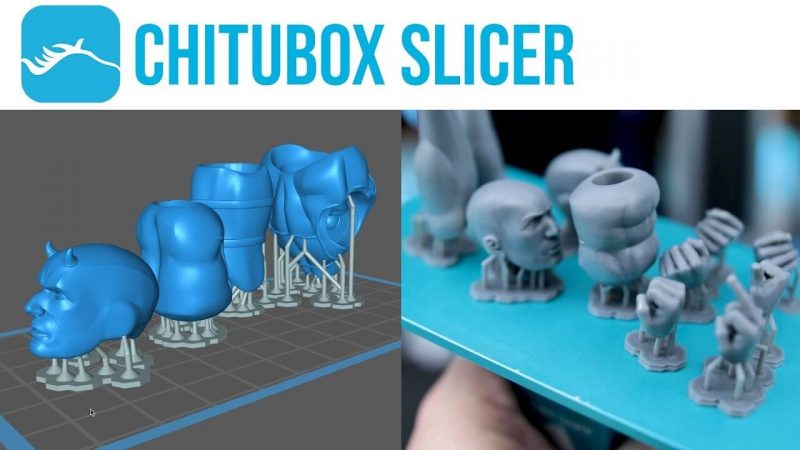 Peopoly Moai came with a slicer named Asura. But for Phenom, the manufacturer has chosen the well-established and popular ChiTuBox slicer instead.

This slicer is specifically designed for slicing 3D parts and functional prototypes for use in MSLA resin systems.

The abilities of FDM and SLA slicers differ very much, although they would appear to be the same as anyone who is a newbie in 3D printing technology.

But anyone who is into resin 3D printing known how a slicer into this 3D printing technology should be well-equipped to do hollowing of the 3D part or functional prototype and ChiTuBox offers a function to one-click hollow a model leaving a user-defined wall thickness.

So, you can judge the efficiency of this software based on that feature.

Although this feature is not the one that’s responsible for reducing printing time for a complete MSLA system, it is saving material and increasing the likelihood of print success.

Also, it reduces the suction and peeling effect when layer shifting.

In general, it operates on the logic that the denser a print is, the more a layer sticks to the vat bottom resulting in higher physical force impacts and ultimately to a higher failure rate.

There is a Support tab on the website of Peopoly. This tab includes the setup guide, work directory, resin guide, LCD replacing guide, as well as the Phenom test pre-sliced print files to download as a user and use them by reading them.

Apart from this, the Contact Us option on the website would let you reach out to the email of the manufacturer and contact them using the same.

The factors that should be taken into account while purchasing this printer are mentioned in brief below.

3D Printer Practicality: The printer can achieve closer to the claims mentioned on its website if it is in the hands of some experienced 3D printer users.

3D Printer User expectations: Printing larger build size with MSLA technology is what this printer can do faster than other SLA technologies. So, if that is your expectation, the printer will be able to satisfy it.

The Peopoly Phenom offers a print volume that is rarely seen in other desktop resin printers, so that is a super plus on the printer’s side.

The build plate of the printer is around five times the size of that of any average resin printer.

The print results of the printer claim it to print objects up to 40 cm high, resulting in an overall print volume of about 14 times larger than that of famous 3D printers named Elegoo Mars and similar budget resin printers.

Accompanying that super feature is its modular design and ease of use which is geared towards tinkerers and small businesses that are waiting to take full advantage of the generous build volume and earn from the same.