Rubber 3D Printer Filament Guide – All You Need To Know

When it comes to discussing 3D printer filaments, all we can think of is ABS, PLA, TPU, or at the most Nylon. But, there are other filaments in existence as well like, PVA, PETG, Rubber, etc.

People in the 3D printing domain are extremely excited and are doing everything to make Rubber 3D printing as popular as any other. Whether they will succeed or not, only time will say!

Rubber products have their own unique set of demands and markets. Since the inception of manufacturing, rubber has always had a special place in terms of materials used for manufacturing. And this special place is because of the unique characteristics possessed by rubber.

For this reason, after the idea of 3D printing came into existence, researchers were desperate enough to try the idea on various materials, especially Rubber.

But 3D printing with rubber 3D printer filament is not possible. As rubber undergoes vulcanization by external factors for improving its elasticity and strength.

Once Rubber undergoes vulcanization, it can never be reheated, otherwise, it burns. And for this reason, researchers occupied their brains in developing rubber-like 3D printer filaments and resins.

In this article, we will discuss the most common rubber 3D printer filaments that are made of thermoplastic elastomers.

These rubber-like 3D printer filaments have found use in several applications including shoe soles, flip flop as well as sealing rings.

The Rubber 3D printer filaments that we are going to discuss below have been created after the result of trouble taken by designers, initially experimenting with flexible filaments.

As these filaments are softer to print than the regular ones, they did not print as they were expected to, when subjected to a 3D printer. The pushing string effect of extruders either bent or twisted the flexible filaments.

This is the brand name given to manufacturing materials made by Fenner Drives, the company that produces specialty materials for end-users in the industrial segment.

Because of its characteristics and unique performance, Ninjatek has achieved tremendous popularity in the 3D printing industry.

Through its polyurethan integration, Ninjatek has unmatched extrusion manufacturing expertise of fifty years in the field.

Currently, on its website, one can get information about:

Ninjaflex: For all the printers with direct-drive extruders, Ninjaflex enables users to manufacture flexible, strong, and ideal prints. It is made from a specially formulated thermoplastic polyurethane material. The shore hardness of Ninjaflex is 85A.

The diameter of filament: This Rubber 3D printer filament is available in 1.75 mm and 3 mm.

NinjaTek has partnered with ColorFabb, a brand active in the business of 3D printing for more than seven years. ColorFabb is a Dutch company that specializes in the development and production of high-end quality 3D filaments. With the help of this partnership, Ninjatek will be able to distribute its range of filament in entire Europe. 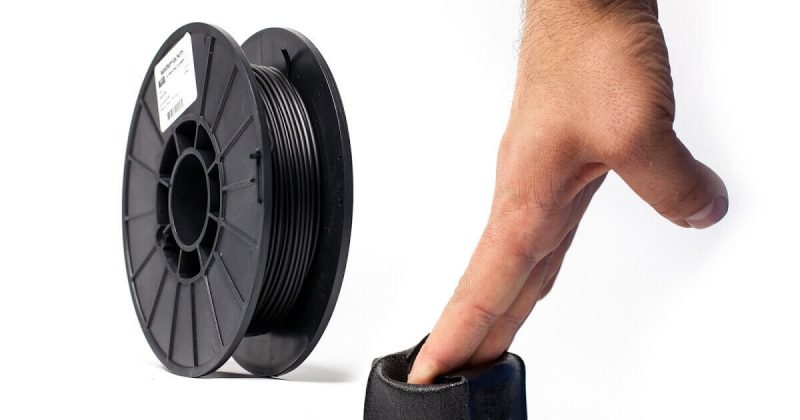 Headquartered in Southern California, MatterHackers offers a huge amount of variants in 3D printing materials and accessories, be it for an industrial 3D printer or DIY laser cutters.

Among many types and diameters of filaments, rubber 3D printer filaments in Soft PLA.

Soft PLA: This 3D printer filament acts, and feels much like Rubber. The shore hardness of Soft PLA is 92A. It is one of the most convenient 3D printer filaments for creating parts or functional prototypes that are subjected to bending or flexing when put into applications such as:

The diameter of the filament: Soft PLA by MatterHackers is available not only in 1.75 mm but also in 2.85mm diameter.

Weight: 0.75 kilograms is the standard weight in which this filament is available.

Apart from having a fantastic technical team, the company also has a wonderful customer service team that helps you with anything you may need. Be it finding the right machine for packaging your specific product, to discussing which filament is best for your application.

TPE is something anyone in the field of the 3D printing industry can relate to. PC stands for plasticized copolyamide. This complexly named material is a chemical co-polymer of highly flexible nylon and TPE. This 3D printer filament has some unique features that allow users to print even highly flexible parts or functional prototypes with ease.

It allows any FFF 3D printer to print parts from the durable prosthesis to completely wearable outfits, as well as cell phone closures and highly flexible industrial parts and functional prototypes.

The end parts printed using PCTPE possess the smooth lustrous texture of Nylon added with the flexibility of rubber-like TPE.

But while giving a part all of these, the filament does not compromise on durability as well as non-delaminating benefits.

The shore hardness of this 3D printer filament is estimated to be around 100A.

This rubber 3D printer filament is also used in manufacturing cell phone covers and cosplay wearables that can be made with FDM 3D printers.

To 3D print rubber and to 3D print PCTPE is almost similar as it has high durability and a smooth texture that is nylon-like.

Typically, you can use PCTPE for printing parts and functional prototypes that have similar to or more flexible characteristics than Nylon.

It is also quicker and easier to print with this rubber 3D printer filament as it is less elastic than TPE. 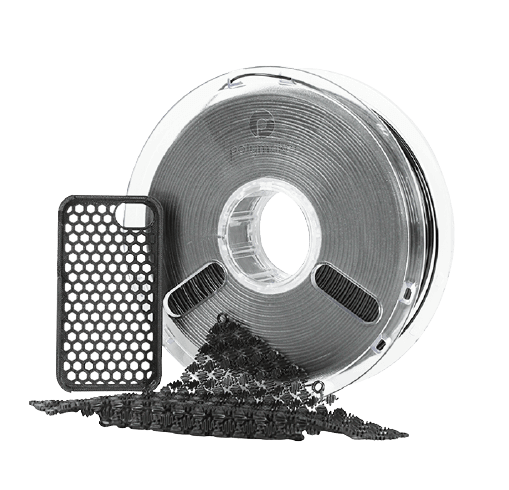 Describing themselves as an international team passionate about 3D printing, Polymaker claims to manufacture the best of 3D printing materials by controlling every stage of production.

Apart from Polyflex, Polymaker has:

This Rubber 3D printer filament belongs to the family of high-quality flexible materials. Perfect for applications that demand, not only high durability but also flexibility. It has a shore hardness of 95A and can be stretched three times more than its original length.

Polyflex works mainly with desktop 3D printers and the only concern reported on one of the websites is that this one too like another one on the list is available only in 750-gram spools. Also, the color range is limited.

The diameter of the filament: As mentioned in the above 3D printer filament, Polyflex too is available in 1.75 or 2.85 mm.

Founded in the year 2012, FormFutura supplied PLA and ABS to the western European market. Based in Amsterdam, Netherlands, the company currently has 400+ resellers and customers in more than 75 countries.

It supplies them with additive manufacturing materials. Its rubber 3D printer filament is named FlexiFil.

Having rubber-like high performance and partially bio-based TPC type filament, Flexifil is known for having unique flexural strength properties by which objects made from it, return back to their original position as well as shape even after being bent, dent, or folded.

A unique combination of flexibility, long-term heat resistance, strength, as well as excellent UV resistance, and chemical resistance are the properties that Flexifil possesses. Its shore hardness is 45D.

The diameter of the filament: Flexifil is available in two diameters which are industry standard i.e. 1.75 mm and 2.85 mm.

You can achieve a rubber-like feel on 3D prints manufactured for the filaments mentioned above.

Even after getting any of these rubber 3D printer filaments, it is necessary for you to get the printer settings right.

Otherwise, the cost of buying anyone of these 3D printer filaments will not convert into something fruitful.

Additionally, you would end up wasting your time and not meet the project deadline. So, be careful because these are all flexible filaments.

The above-mentioned filaments are the rubber 3D printer filaments. They are manufactured by different brands and are available in the market on their own terms and prices.

If you have a 3D printer and wish to experiment with making parts and functional prototypes that depict rubber, you would’ve to buy them and take care of the printing guidelines mentioned above.

Rubber being a really sensitive material, the guidelines should be strictly followed. Otherwise, it could lead to print failure and if not taken care of, the parts or functional prototypes manufactured can fail when subjected to application.