The slicing software is extremely easy to operate, the print quality and print speed are both commendable. All these at a price of $999 is just too good of a package to not sign up for.

You will fall for its looks the moment you have a first glance at the Wanhao Duplicator 8.

The Chinese printer manufacturer has not only paid enough attention to make their printer aesthetically pleasing but also has put enough effort to offer a list of immensely power-packed features at a very affordable price.

So, without making you wait, we’d like to jump on the details right away.

Wi-fi in real-time operation, an extruder system with high wavelength DLP curing system, a considerable build volume to let you print parts and functional prototypes at one go, there’s a lot that Wanhao Duplicator 8 offers which other printers of the same price range does not.

This equipment would come installed inside the resin tank of Wanhao Duplicator 8. Connected with the user interface, it will always let you display the status of the amount of resin inside the 3D printer.

Because of this feature, you can check the status of the resin inside the resin tank and ensure that it is filled before you start printing a 3D part or functional prototype.

So, never ever does the print process that you begin to have to pause because of the empty resin tank. The complete process is smooth and uninterrupted!

To ensure that there is an accurate generation of the temperature inside the print chamber; Wanhao has installed a temperature monitor inside Duplicator 8.

This is to help you achieve a precise temperature range and hence provide a better print quality.

You can adjust the temperature according to the resin that you are using for printing a part or functional prototype.

The temperature monitor is also connected with the user interface which will display the exact temperature to you.

You would get to know about the slightest imbalance in the print bed of Wanhao Duplicator 8 on the display screen because of the spirit level check provided by the printer manufacturer.

To ensure that the print bed is always working at a leveled condition, Wanhao has provided the leveling check.

This will enable you to always print with a flat printing table to make sure that the first layer of the object that you are 3D printing is precise and so is the complete geometry.

Wanhao Duplicator 8 is not only different from the traditional FDM 3D printers, but also from other SLA 3D printers that operate on the single laser beam.

The printer can print a complete layer at a time, unlike the FDM 3D printers that have the single extruder extruding continuously.

This printer manufacturer customizes array light has 9 percent extra power than normal resin 3D printer which means a higher amount of light and penetration that leads to efficient printing.

Also, the printer manufacturer keeps on increasing the efficiency of Wanhao software and mechanical system.

Wanhao Duplicator 8 tops the list of other 3D printers with optical uniformity of 89 percent.

The printer manufacturer claims that when compared with laser SLA or conventional DLP with Jerry-built projectors, Duplicator 8 has a lesser to the point of being negligible distortion rate.

Conventional light sources used in other 3D printers gather at the center of those 3D printers causing the light to be uneven at a different spot of an LCD panel.

Whereas, the Wanhao Uniformtrix technology resolves this issue perfectly to an extent that the uniform light goes across the LCD panel without any distortion!

The complete operation of Wanhao Duplicator 8 is done in three simple steps:

V at the checking window

To ensure that the final prints do not stick at the build plate, Wanhao Duplicator 8 has constructed a small transparent window.

This would enable you to not only do the resin level check but also see the printing object is printed in the manner you wished or not. So that, you can do the changes at the right moment!

Duplicator 8 is equipped with a 2K HD high-resolution customized LCD screen. The power of his UV light is as high as 150 Watts, it is equipped with a MM optical stop sensor system that is three times more sensitive than normal mechanical switches.

The contrast ratio, as mentioned above is 89 percent higher than normal LCD prints. And this is applicable for all kinds of parts that you manufacture on the printer, be it tooth printing, mechanical parts, jewelry printing, the part quality will always be incomparably satisfying. 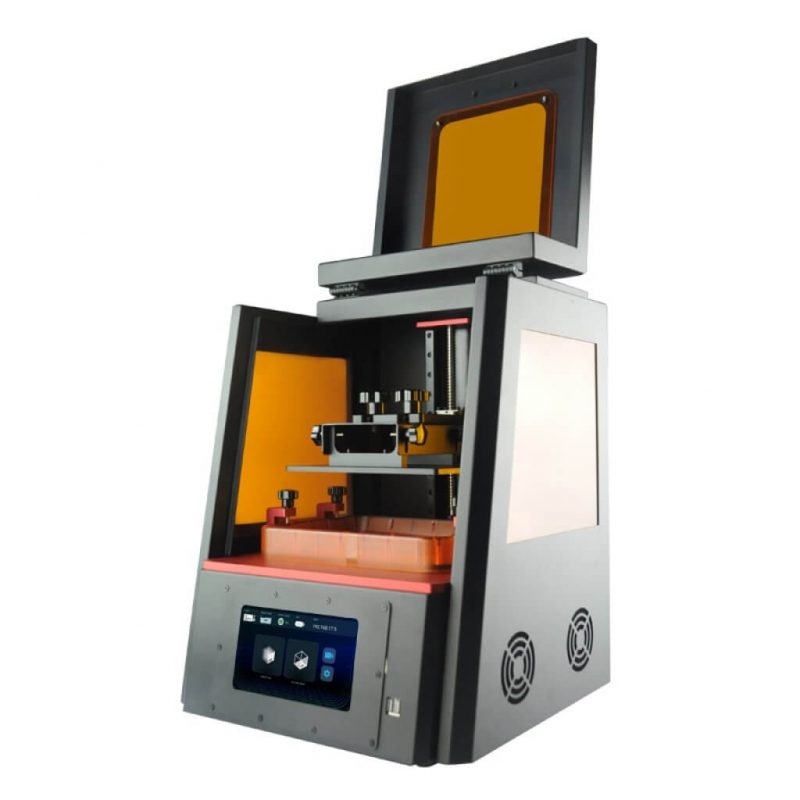 You can print a part or functional prototype within the speed range of 10 to 40 millimeters per hour.

The UV LED array design with 90 percent optical uniformity is used in object creation on Wanhao Duplicator 8. The wavelength that this UV LED array has is in the order of 405 nanometers.

A UV Lamp is used to generate these optical uniform rays inside the printer’s print chamber. Its packing size is 470 mm * 460 mm * 575 mm.

The enclosure used for closing the print chamber of this printer is Tilt Hood with UV safe glass. Wanhao Duplicator weighs 22 kilograms.

The Z-axis movement of the printer is made possible using a reinforced double linear guide with gap eliminated ball screw.

The cooling system of Wanhao Duplicator 8 is constructed using six super silent cooling fans. And to monitor the temperature of this 3D printer there is a built-in system provided by the printer manufacturer.

Similarly, you have a built-in leveling monitor to level the 3D printer before you start to 3D print. The resins supported with the 3D printer should be in the order of 405 nanometers.

Wanhao Duplicator 8 is available at a market price of $999. 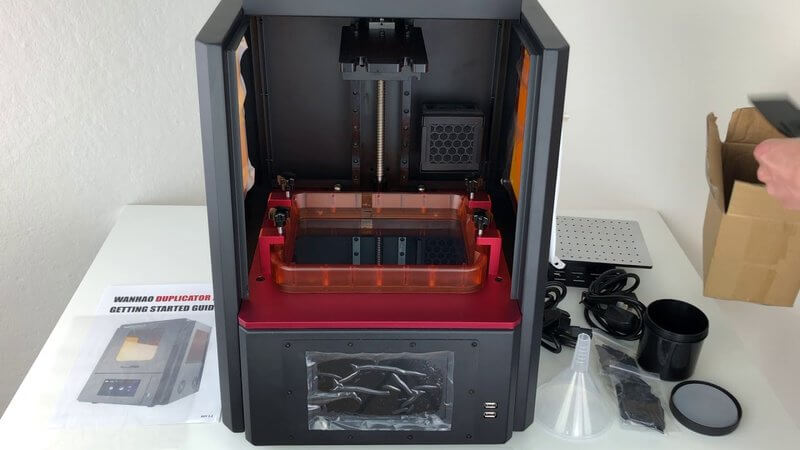 It is only after seeing the side view of Duplicator 8 that you get to know about the inclined body at the front face.

While seeing the 3D printer from its front, you can get to see a little part of the complete print chamber because of the transparent body.

There is a handle to open the access to the printer’s print chamber on the upper part of the body.

Whereas, the lower part of the body contains the user touch screen interface that will let you monitor as well as control some aspects of this printer.

To monitor the inside of the print chamber, the printer manufacturer has kept the side body of Duplicator 8 transparent to an extent.

This facility will let you pause the print as soon as something goes wrong.

On lifting the door handle that gives access to the print bed you will find the print bed, just above the light source.

The back of the printer is straight. Overall, Wanhao Duplicator 8 makes up for an aesthetically pleasing 3D printer.

Wanhao Duplicator 8 comes completely assembled when delivered to your doorstep. All you need to do is read the instruction manual that comes inside the printer box to get acquainted with the parts and functions of this 3D printer.

Once you have done that, you can take a look start upload your file on the printer using Wanhao Software. After having loaded the same, the model is ready to print, level your 3D print bed using the user interface.

It is advisable to get used to the user interface and its aspects because that one part you’d have to frequently deal with. Doing all of these would not take more than 10 to 15 minutes of your time and then you are good to go.

Being a DLP 3D printer, Wanhao Duplicator 8 uses a light source for curing the resin. As mentioned above, the UV-LED lamp having a wavelength of 405 nanometers is used for solidifying parts and functional prototypes.

There is a digital light projector screen where this light source is particularly developed. A DLP projector screen will flash the image of a layer and that’s how all the points of the layer can be solidified simultaneously.

The heart of the complete DLP 3D printing process is the DLP chipset that contains the DMD i.e. digital micromirror device that contains hundreds, thousands, or in some cases millions of micro mirrors that directs the light to create the pattern of a layer onto the bottom of the resin tank. 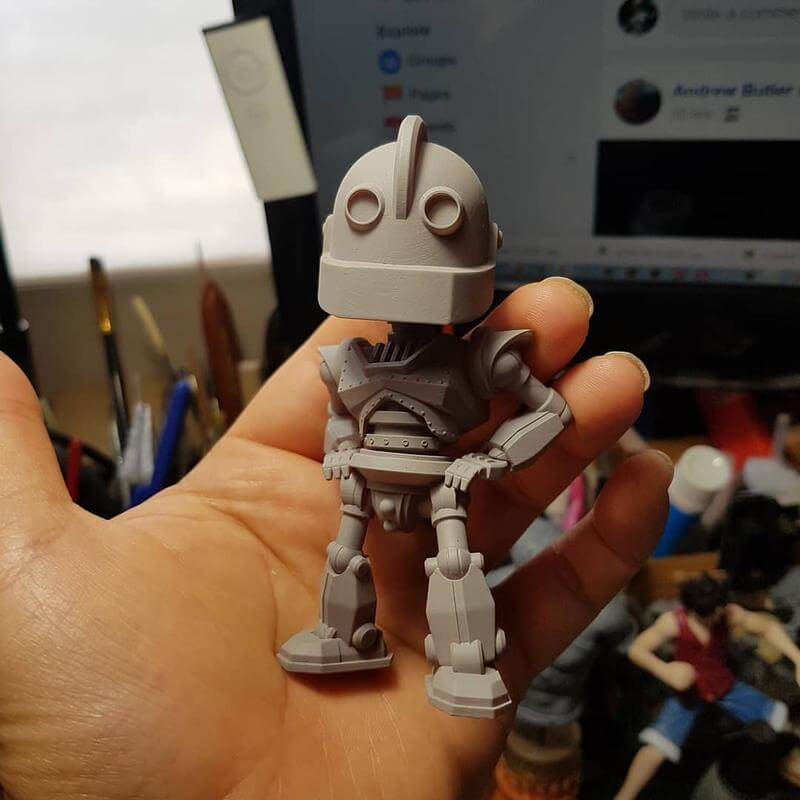 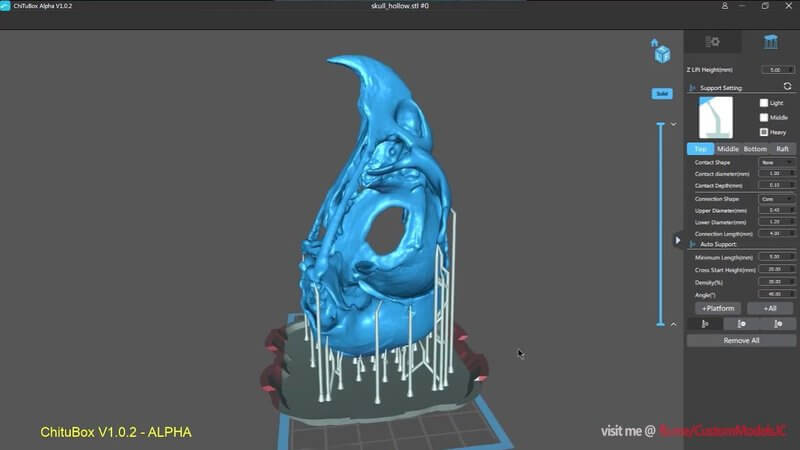 Wanhao Duplicator 8 comes with an installed Wanhao Slicer, and Wanhao D8 Workshop. However, the printer is also compatible with 3D party software such as Chitu, and CW.

All of these can be operated comfortably with systems running on Windows as well as Mac operating systems. STL file transfers can be done via Wifi, or Flash disk print.

There are videos available online for unboxing Duplicator 8, preparing a zip file, and D8’s print test.

Other basic questions and concerns related to this 3D printer are also answered either via photograph or video.

Apart from this, you can email the printer manufacturer with your doubts and that would be satisfactorily answered.

3D Printer Cost: Considering the features that are offered by this 3D printer, Duplicator 8 is extremely affordable.

3D Print Quality: The super lighting curing system of the printer enables you to have a 90 percent higher contrast ratio, an XY resolution of 65 micrometers, and a Z resolution of 10 micrometers.

3D Print Speed: Using Wanhao Duplicator 8 you can avail yourself print speed range of 10 to 40 millimeters per hour.

3D Printer Capability: Not only is the 3D printer capable of 3D printing speedily, but also of cooling speedily. Thanks to its six-fan cooling system.

3D Printer Practicality: When in operation, the printer hardly makes any noise at all and does not vibrate.

3D Printer User Expectations: Beginners in the field of 3D printing, hobbyists, educationists, and even professional 3D designers will get a lot to experiment and learn from this 3D printer. In short, there is a lot for every kind of user in Wanhao Duplicator 8.

Some of the features of the Wanhao Duplicator like the temperature monitor, spirit level, are completely different. And this makes the user interface unique and powerful in function.

The slicing software is extremely easy to operate. The print quality and print speed are both commendable.

Yes, you can argue that the printer does not offer some features like an in-built camera, but you have enough to appreciate in terms of the other unique features.

All these at a price of $999 is just too good a package to not sign up for.