FLSUN QQ-S Pro is a 3D printer that you can buy to experiment and learn the 3D printing process. It would teach you the basics of 3D printing technology like no other at a very affordable cost. So, if you are still new to the technology and want to become a professional someday in it, it is worth a go.

Upgraded with an auto-leveling sensor, FLSUN QQ-S Pro does multi-dimensional leveling in only three minutes. It is an easy-to-operate 3D printer that ...
Add to wishlistAdded to wishlistRemoved from wishlist 0
Add to compare
Check Price
FLSUN

If there is one attribute that this 3D printer can be associated to be mainly designed for that is, speed! FLSUN QQ-S Pro prints at 1.5 times the speed of the I3 structure printer managing no change in the accuracy.

The printer relies on high-speed products and high-quality services. You can print with print speeds ranging from 50 to 120 millimeters per second and yet the printer manages to give you the printing layer thickness of 0.15 mm.

Let’s look at the various aspects of this amazing 3D printer to find out how does it manage to balance such a high 3D printing speed without losing out on its accuracy of printing parts and functional prototypes. 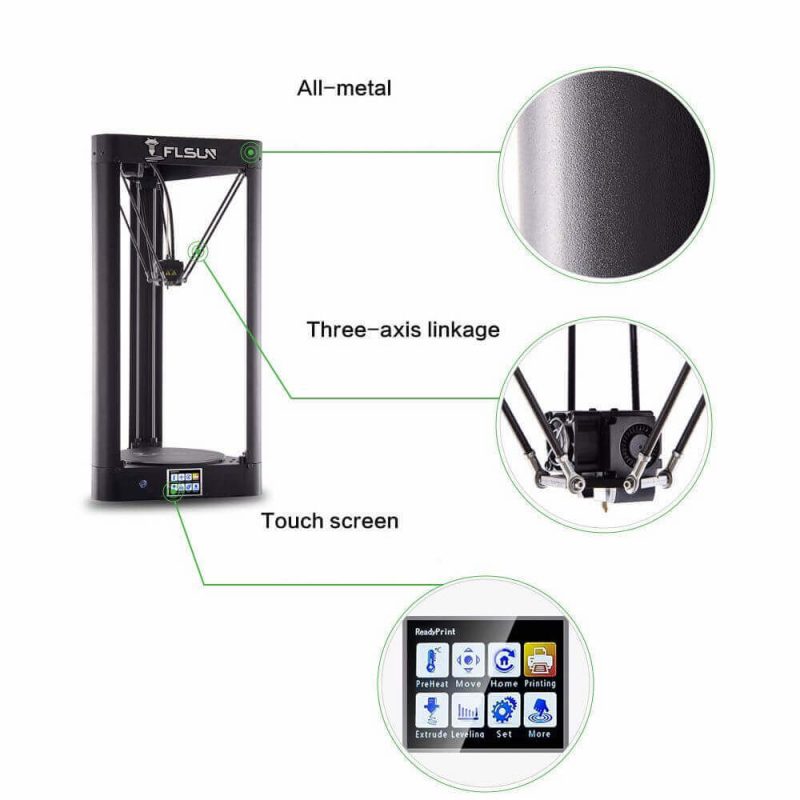 The most eccentric part about FLSUN QQ-S Pro is its flexible three-axis linkage system, powerful 32-bit motherboard, a 24 Volts power supply, lattice hotbed, and all-metal side shell that ensures better printing quality and a more stable structure. Some of the most exciting features of this 3D printer are mentioned below.

This is promoted a lot by the printer manufacturer as a high-strength lattice composite coating that allows fast heating; the characteristics that you need to increase your overall print speed.

Additionally, you also get very few warping issues to deal with while printing with 3D printing materials like ABS.

Moreover, having a lattice 3D print bed also means that there’d hardly be any bed adhesion issues in FLSUN QQ-S Pro during the printing or after the part is 3D printed and it is time to take it off the bed. And this is something that will make you relate to Anycubic Ultrabase.

There is a huge demand of high-tech glass bed because it releases prints in the coolest manner one can ever imagine to take off the part or functional prototype from the print bed.

You would not need any scrapers, hairspray, glue sticks, and mess while removing the prints from the bed.

Also according to the manufacturer, the print bed reaches up to 100 degrees Celsius in less than five minutes, this would allow you to print the most common filaments without almost any problems, speedily.

Like all other typical Delta 3D printers, this one too has a fixed, nonmoving, printing bed that needs to be leveled only once which makes it pretty feasible if you are going to 3D print for the first time.

Another feature promoted by the manufacturer is the all-new titan extruder inside the QQ-S pro 3D printer. At first glance, the extruder looks like the E3D Titan. But the exact detail of the extruder isn’t available.

However, it does look like an efficient design selection for the smooth feeding of filament. At least, the results specify the same.

It is equipped with a 0.4 mm extrusion nozzle but it can also hold 0.3 and  0.2 mm nozzles when you need finer prints than what you get by using a 0.4 mm one.

The extruder is capable of withstanding 270 degrees Celsius temperature at max, which means that printing with ABS, PLA, PVA, and wood would be a piece of cake.

Not only that but also printing with HIPS and flexible filaments with support materials would be possible.

The Chinese manufacturer has kept the brain of this 3D printer operating on an eight-bit Arduino Mega 2560.

It is equipped with orchestrating components such as the extruder, the heated bed, motors, and sensors. The more power you have, the smoother the 3D printer operates.

The 32-bit motherboard allows you to stably print and manufacture even at high-temperature ranges and high printing speeds.

The printer is equipped with a touchscreen and Wi-fi connection. It can resume printing from the same condition where you had to stop because of the power cut off.

FLSUN QQ-S pro is equipped with filament detection, and turns-off automatically after the completion of 3D printing a part or functional prototypes. These qualities make it a perfect 3D printer for use at offices and at homes.

Even when you are building a part or functional prototype that has the build volume equivalent to the maximum that this 3D printer can offer it does not vibrate or anything. Even if you are 3D printing at a very fast print speed, it manages to stay stable.

According to the manufacturer, the QQ-S pro has an operating noise of fewer than 50 decibels which makes it suitable for your offices and homes.

However, there is no enclosed printing chamber depending on the 3D printing materials that you are using for printing parts or functional prototypes. So, at times you will need to watch out for toxic fumes. But, that’s manageable! 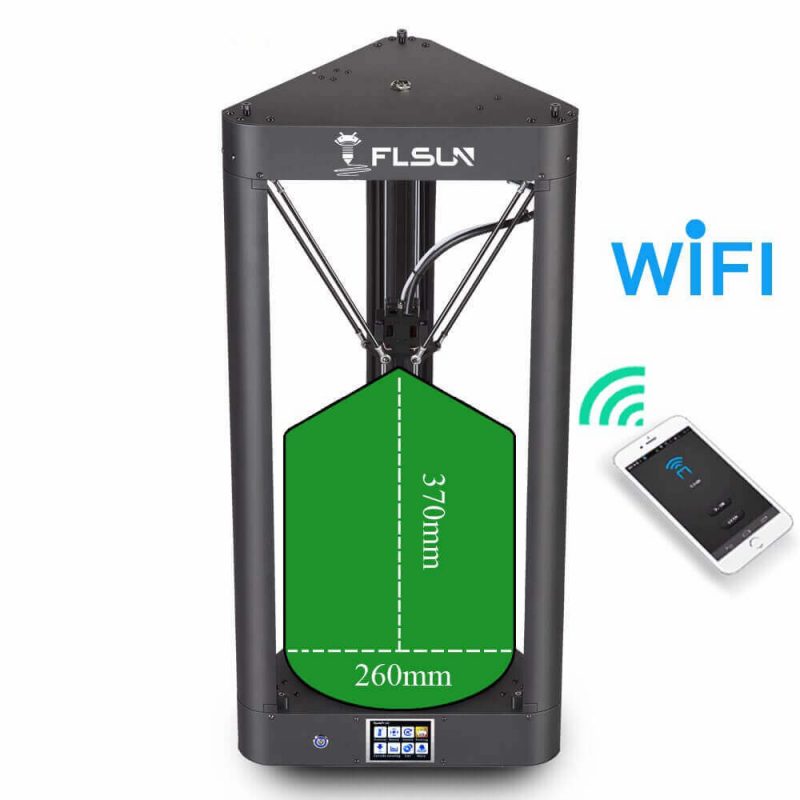 The print speed of FLSUN QQ-S pro is 300 millimeters per second, you can print with filaments of 3D printing materials such as ABS, PLA, HIPS, Flex, Wood, etc., provided they have a filament diameter of 1.75mm. The nozzle diameter of this 3D printer is 0.4 mm.

The machine weighs 12 kilograms and its dimensions are 290 mm * 350 mm * 800 mm. It will be shipped to your place after five business days from the day you order.

The manufacturer gives one year warranty on every hardware part that makes this 3D printer.

The drive mechanism of this 3D printer is Bowden, there are Nema stepper motors inside the 3D printer that will allow the nozzle system to move up and down during printing layers of a part or functional prototype.

The leveling method of this 3D printer is one-click auto-leveling. You do not have a flexible or removable print bed, but there is no difficulty reported in removing the 3D prints.

For ease in operation and interaction, there is a 3.2 inches full-color touchscreen installed on the body of this printer. 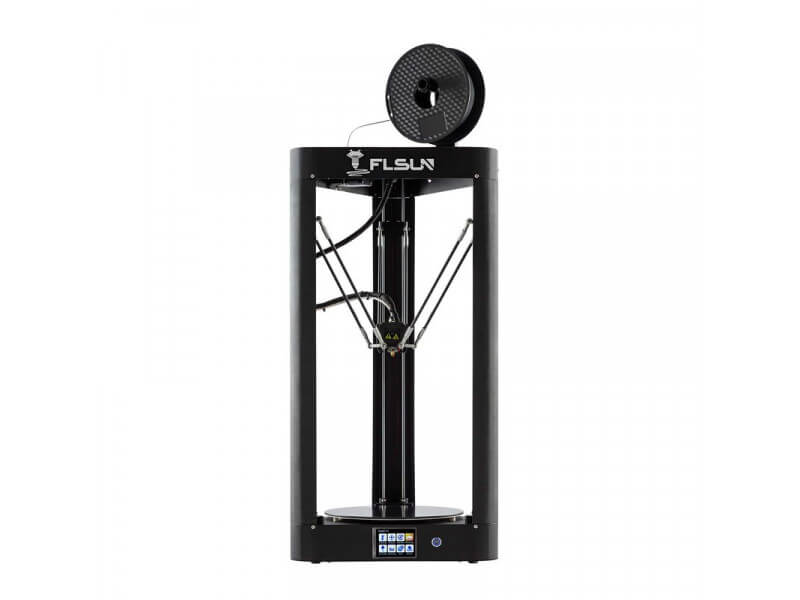 If you have ever encountered a Delta 3D printer, maybe offering a lesser or more build volume than FLSUN QQ-S Pro, you’d be able to relate to the design of this printer. That’s the peculiarity of Delta 3D printers, they are all the same in design.

The typical triangular shape formation using three connected strands that have rails over them which allow for the nozzle system movement to the print bed of the printer and back! The full-color touchscreen interface of this 3D printer is present at the bottom of the body of this 3D printer just beside the power button.

The touchscreen interface will let you operate and control most of the functions that you can do on FLSUN QQ-S Pro, like pre-heat, move, print, extrude, level, set some of the aspects of this 3D printer, and a lot more.

The printer is pretty much plug-and-play. There is an instruction manual that you must go through before starting with your first 3D print.

Doing so would make you familiar with some typical nuances that this 3D printer carries and which differentiates it from other 3D printers.

After this is done, auto-level the bed accordingly before starting to 3D print. All of this can take approximately 10 to 15 minutes of your time and then you are good to go.

The complete process starts with a solid filament, any one of the above-mentioned ones is what you can use to print with this 3D printer.

You need to fit that filament in the filament spool that’s present on the head of this 3D printer. The printing process actively starts after loading the 3D printer filament.

It is brought to its glass transition temperature in the extrusion chamber, after which the 3D printer filament is allowed to flow on the print bed using the nozzle system.

The first layer of 3D printer filament is laid down on the print bed according to the geometry of the part or functional prototype that’s fed to the printer.

And then the nozzle moves 0.15 mm above the first layer to print another one. And the same process is repeated until you get the complete part or functional prototype.

The cost of printing a single part or functional prototype using this process is generally low. However, it depends on the geometry of the part, the 3D printer filament used in production, the amount of infill used in it, the support structures, and a lot more. 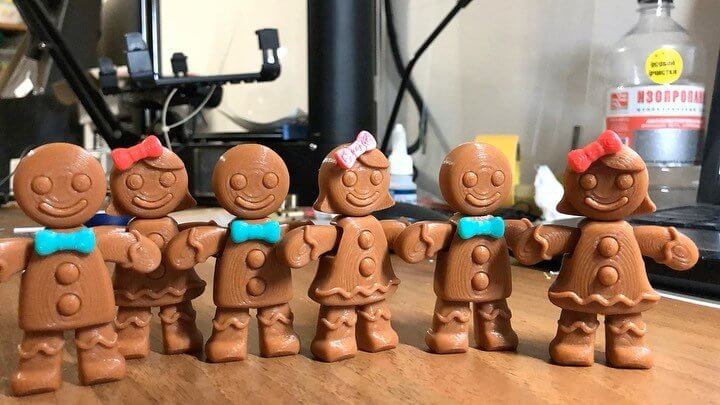 The layer height in parts and functional prototypes produced by this printer is 0.15 mm which is pretty good for an FDM 3D printer to have.

You are recommended to use Cura, Repetier Host, or Simplify 3D with FLSUN QQ-S Pro.

They all allow for file formats with .STL, .OBJ, or .GCODE as extensions. The software is compatible with different operating platforms including Windows, Mac, and Linux.

There are a lot of videos that you can refer to that are available for free online. Apart from that, you can contact the technical team of this printer manufacturer via call or email.

There is also a lot of information available about various printing systems of FLSUN to download.

Below mentioned are some of the most important parameters that you need to have a glance at before buying this 3D printer.

3D Printer Cost: Considering the build volume, the print speed, and quality the printer is able to offer, the printer’s price is something you can comparatively afford to pay.

3D Printer Quality: Not too good, not too bad.

3D Printer Practicality: When 3D printing, the printer does not vibrate or make a lot of noise.

3D Printer User Expectations: Hobbyists, academicians, beginners as well as intermediate users’ expectations are something that the printer can manage to successfully fulfill.

So, if you are still new to the technology and want to become a professional someday in it, it is worth a go.