The industrial revolution has given us many fantastic inventions. When any utility is invented, first of all, the industrial class is benefitted and the products that are taken from that invention are made available to the elite and then to the normal people.

Similarly, when 3D printing technology was invented, it remained limited to gigantic bulky machines that cost hundreds of thousands of dollars.

As of late, we’re seeing that the consumer market has become flooded with extremely cheap desktop 3D printers.

And then although to a much lesser extent, the same trend has been taking place in the semi-professional market.

In this article, we will be stating your information about various industrial 3D printer price and their features. This would help you while buying 3D printers for yourself.

We will be mentioning information about 3D printers in three categories:

All three of these categories are known to have amazing options that dominate the 3D printing industry and are the most common technologies in the market currently.

Also with the advancement in 3D printing technology the days when a 3D printer used to fit in one room are gone.

Nowadays even a printer that would take one corner of the room would work as efficiently as that giant 3D printer used.

Below is a list of machines that we recommend should be bought regardless of whether you a beginner, an intermediate, or professional in the field of 3D printing technology. 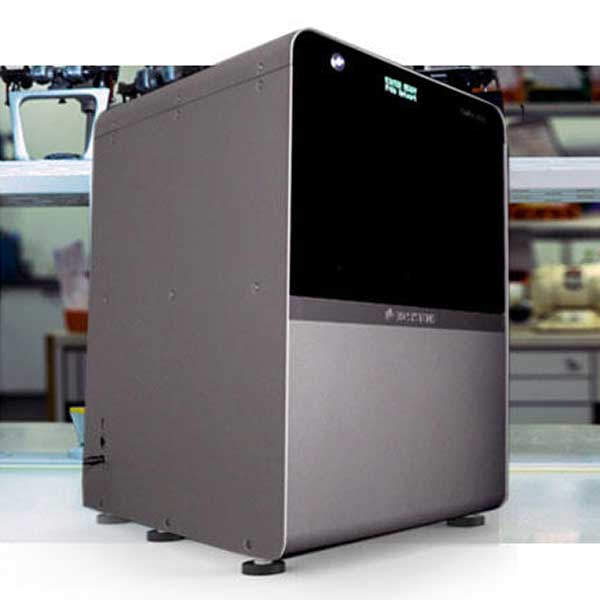 3D Systems, the manufacturer of this printer, have dipped into the entry-level industrial 3D printer market.

The FabPro 1000 is one of the most affordable resin industrial 3D printer prices ever. And this has been possible because of the amazing features of this 3D printer available only at $2,495.

This 3D printer is designed to print accurate plastic prototypes to test for functionality and shape.

Additionally, it has extensive applications in the jewelry sector for investment casting, as well as in dental models and orthodontic splits making this industrial 3D printer price hugely beneficial for manufacturers in the field of jewelry as well as healthcare.

3D Systems claim that the FabPro 1000 can print parts or functional prototypes with 22% lower costs than its competitors, as well as 45% faster.

An eccentric highlight of this printer is the consistency and precision of the DLP 3D printing technology that is used by this printer which gives an astonishing 30 microns layer resolution.

As you might know that resin 3D printing involves post-curing, the printer manufacturer also sells their own LC-3D Print curing box for your resin parts which you can buy separately.

Fab Pro by 3D Systems is a robust 3D printer that can be classified as a desktop 3D printer. The printer's wide range of variety offered in terms of ...
Add to wishlistAdded to wishlistRemoved from wishlist 0
Add to compare
Check Price
3D Systems

The printer manufacturer of this printer, Raise offers both the Pro2 and the Pro2 Plus as industrial FDM 3D printer prices.

The specialty of each one of these is that it offers fantastic reliability, accuracy, and versatility.

However, the Pro2 Plus offers a larger 605 mm Z-axis for printing immensely taller parts and functional prototypes.

It is a general fact in the market that FDM printers will always struggle to match the accuracy and surface area of an SLA 3D printer.

However, contradictory to this fact, the Pro2 Plus can still print very intricate parts and functional prototypes.

Being an FDM industrial 3D printer price, the Pro 2 Plus is known to print with 100-micron layer resolution.

Additionally, you have a fully enclosed chamber to keep printing conditions consistent.

The dual extruder system of this printer allows for multi-material printing.

So in prints wherein you require supports or for any rapid prototyping or parts or functional prototypes that require two different colors, the Pro2 Plus comes as a gift. Like a cherry over the cake, you have the printer’s 7-inch touchscreen features as a very ergonomic user interface that provides useful on-screen visualizations during printing.

In case you have any problems the Raise3D has US-based tech support to provide solutions to its customers all over the globe.

The maximum temperature range reach of this printer i.e. 300 degrees Celsius creates a lot of opportunities for printing with a lot of filament materials.

The Raise3D Pro2 Plus can print not only using standard 3D printer filaments like:

Connecting to this printer is possible wirelessly using IdeaMaker software which can be used for controlling as well as monitoring the printing remotely. 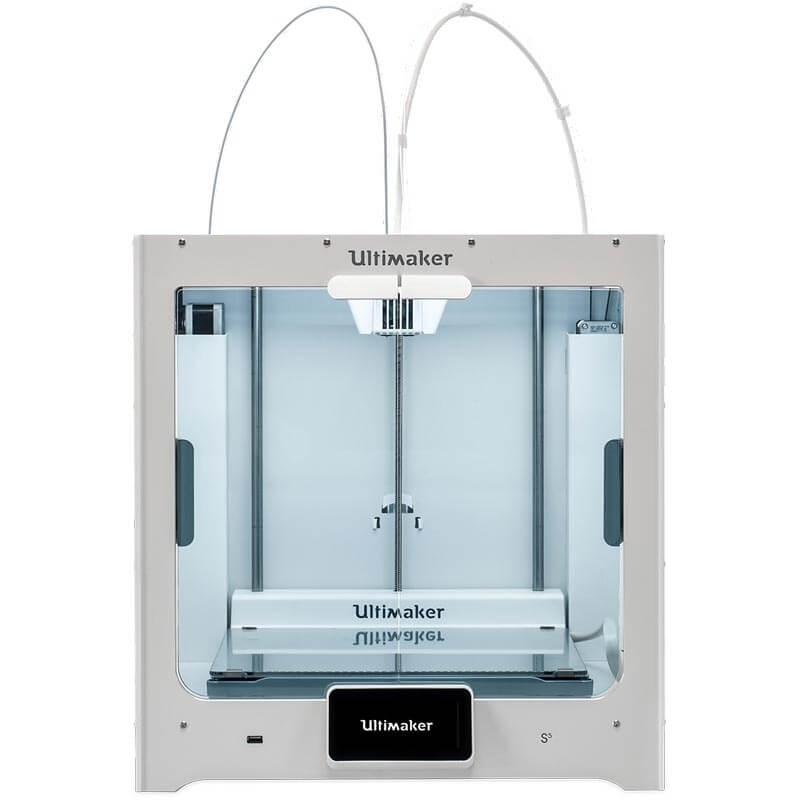 Ultimaker, the company is claimed to be the kings of the prosumer 3D printer market.

This is because of the immense amount of success it was able to achieve with its Ultimaker 3. It went on winning awards and reaching new heights of success.

The S5 is the successor of the S3 and hence there were too many expectations from this 3D printer.

This was also the first time that Ultimaker was stepping up into a higher price bracket.

Thankfully the Ultimaker S5 features a number of key upgrades and even better print quality.

Costing $5,499, this 3D printer moves up into the industrial FDM 3D printer price range, but just make sure you understand it correctly that the money that you pay, makes you tangible to the layer resolution of 20-microns.

All of the prints, be it of the parts or the functional prototypes, are incredibly accurate.

Even while designing intricate prototypes and parts the printer is able to test functionality and shape.

Credit should also be given to the company’s partners including VW, Siemens, L’Oreal, and Ford clearly seeing benefits to their production by using Ultimaker 3D printers and laying trust in the company.

The printer can even print high strength glass and carbon fiber filaments which is a very interesting point to note for all the professional 3D designers who were waiting to explore this unexplored route with Ultimaker S5.

The fact that you can print with Ultimaker filaments or any third-party 2.85mm filament also satisfies supporters of an open and free market.

Ultimaker S5 Pro Bundle features an S5 as well as an Air Manager. The latter goes on top of the printer that captures 95% of ultra-fine particles.

Users can automatically switch from one material to the other, depending on the color that you want the final part or functional prototype to be.

This Bundle allows users to far more scale and continuously print. The bundle is regarded as one of the most preferred industrial 3D printer prices in the FDM 3D printing market.

Extremely easy to use and setup, the Ultimaker S5 not only has exceptional quality but a large build volume. The printer comes with dual extrusion, ...
Add to wishlistAdded to wishlistRemoved from wishlist 1
Add to compare
Check Price
Ultimaker 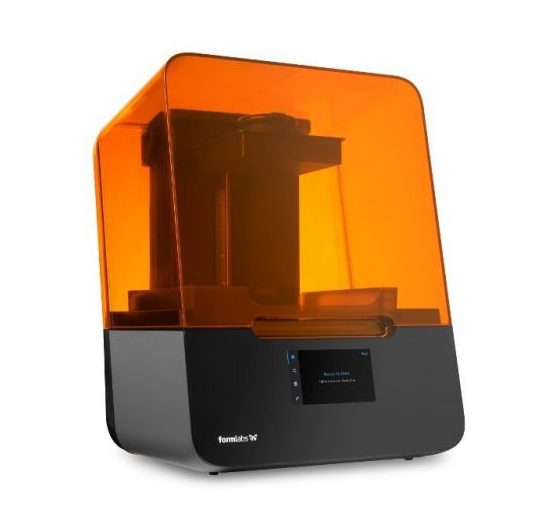 The printer that was available before this one i.e. Form 2 was already a mainstream 3D printer used in dental 3D printing, medical device printing, and 3D printed jewelry.

With the upgrade of Form to Form 3, Formlabs has expanded further on this with several key upgrades.

The Form 3 3D printer uses Low Force Stereolithography (LFS) technology for providing extremely high-quality part and functional prototypes that are precise up to 25-micron XY resolution and crisp surface finish prints that are clear and accurate.

If there is anyone who wishes to buy a resin 3D printer with a larger build volume, Formlabs also sell the Form 3L that features a far larger i.e. 335 mm x 200 mm x 300 mm build volume which the company guarantees that no FDM 3D printer will ever be able to match!

The smooth surface area of a Formlabs resin print makes it ideal for really precise prototypes like a pair of glasses that are seen on its website while reading the features of this 3D printer, as well as intricate pieces like jewelry and dental parts, or custom pieces like hearing aids.

Providing pinpoint precision, Form 3 has a custom-designed Light Processing Unit that uses the intricate structure of lenses and mirrors for its ...
Add to wishlistAdded to wishlistRemoved from wishlist 0
Add to compare
Check Price
Formlabs 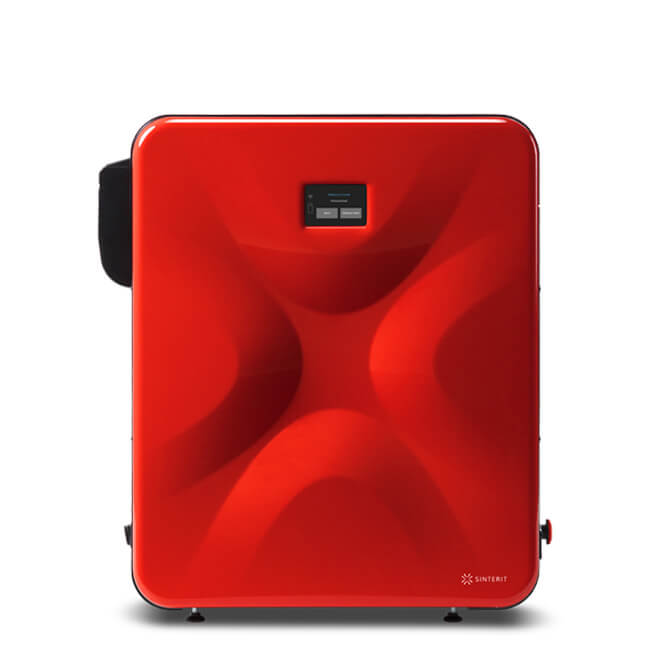 This 3D printer took the market to a storm and shock by being surprisingly lowest cost industrial SLS 3D printers around the globe.

Although the machine had all the main advantages that selective laser sintering 3D printing technology offered but without the huge price tag.

Made by a manufacturer based in Poland, every industrial 3D printer machine price passes, what the company calls a “precisely designed calibration and testing procedure”.

Readers who have learned about SLS 3D printing would know that one does not need to print supports while printing parts and functional prototype with this method.

This machine can save you immense time and money on powder. In fact, you can also print multiple parts or functional prototypes concurrently in the build platform of this 3D printer.

This is something that makes the machine perfect for businesses printing multiple parts at once.

As well as, if one wishes to print many similar parts that are slightly different to test which prototype is best.

The Sinterit Lisa can perform all the above-mentioned functions with ease and its 0.05mm accuracy along the X and Y-axis. Summed up with those accuracies the Z-axis’s 0.075mm precision.

The printer manufacturer has designed its own dedicated software which is compatible with the printer and user-friendly.

The printer manufacturer not only sells the 3D printers but also sells accessories including the Sandblaster as well as specialized SLS powder materials.

So, if you can afford you can bring yourself a complete kit that would make you a Sinterit user, and then for all types of doubts, all you have to do is, contact only one company i.e. Sinterit.

If you wish to control and print a part or functional prototype on this 3D printer, you can do that by the printer’s 4-inch touchscreen, as well as by WiFi or USB.

Here is a printer that can rub off all the impression of "if it is an SLA printer, it would be expensive," in your head. Sinterit Lisa is a ...
Add to wishlistAdded to wishlistRemoved from wishlist 0
Add to compare
Check Price
Sinterit

With more and more use of industrial 3D printer price, the older methods of manufacturing are being used lesser and lesser as 3D printing technology has an inherent benefit i.e. it produces lesser waste compared to the manufacturing methods based on subtractive manufacturing perspective.

All the above-mentioned 3D printers are built by the printer manufacturer considering the businessman in this field primarily and not a beginner.

Because the initial investment in an industrial 3D printer is more than that in a desktop 3D printer.

So, if you too are a small business owner, why not look for an upgrade to these 3D printers.

And if you are a manufacturer why not look for a change? Who knows with the rapidly changing 3D printing market, you might get a product that surprises you with its production capabilities?