The majority of the metal products that you see around yourself are manufactured by Metal Injection Molding. Fabrication of these molds is a very expensive and time-consuming process.

And in the search for a cost-effective process of making small and complex metal parts for production, manufacturers were gifted with 3D printing technology.

From the time it was first discovered, to date, MIM 3D printing has come a long way. Currently, MIM 3D printing is a core manufacturing technology that is widely used for making small components in various industries.

Markets such as medical, firearms, general industry, and many others use components developed from this 3D printing technology.

From the economy’s perspective, when a part’s design is not likely to change in the next five to ten years, and the volumes of it are to be manufactured in hundreds, thousands, or millions, that is when MIM tooling can come handy. 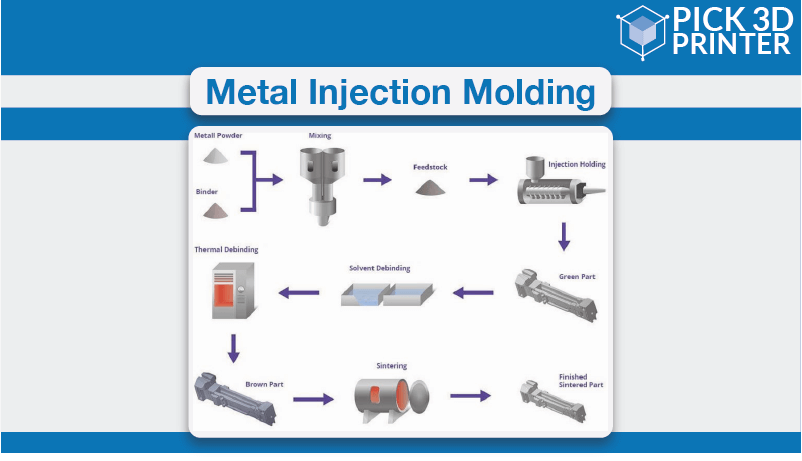 Injection Molding is one of the most common methods of manufacturing. The molten metal is injected into a mold cavity. This liquid metal hardens as it cools.

When it is completely cooled, the mold is opened and hard metal pieces are taken out. Injection Molding is typically favored when you wish to produce pieces in huge masses because of its high design, test, and tooling cost.

Preparing the mold in which the plastic is to be injected, takes a lot of effort so when you have pieces that are to be manufactured in a lot of amounts, this method is very favorable. The unit price drops very much when the amount is very huge.

3D printing is a process of manufacturing parts and functional prototypes layer by layer as per the 3D design file. Once the design file is ready, it is sliced and converted into g-code which is then fed into the 3D printer.

And after that, it’s all about setting your 3D printer for ensuring a perfect print. That is exactly how injection molds in which you feed in the feedstock for metal injection molding can be 3D printed.

It is to be noted how, by 3D printing injection molds, the cost of designing and the efforts are significantly reduced because of the digitization.

A real-life example of this was provided by Athlone Institute of Technology who designed an injection mold of their college’s logo and the whole process took even lesser than 24 hours.

And the cost was very low compared to the cost of manufacturing traditional injection molds.

There are five steps of this process.

What Are the Applications of Metal Injection Molding?

The industries that benefit majorly from this technology are the medical, dental, and aerospace industries.

In the field of Medicine

They are high in strength, attack-resistant, and porous. Each prosthesis can be customized to the patient’s biology and that’s the main benefit.

In the field of Dentistry

Parts such as bridges, crowns, and partial dentures can be modeled specific to the patient and then printed from materials such as cobalt chrome. They can custom fit, have long-term durability, and have high strength.

In the field of Aerospace

One main benefit of MIM 3D printing is that they reduce part count, creates complex geometries, and reduces weight. All of that it does by maintaining the part strength and reliability.

Because of these benefits, it is extremely helpful while making a commercial rocket and aircraft parts. Imagine complex turbine parts and probes, rocket exhausts, all these can be made using metal injection molding 3D printing.

A Company That is Completely Into MIM 3D Printing

To ensure you have complete reliability, predictable parts, starting from 3D printing to the final sintering, they have a range of qualification processes.

Its R & D team works day in, day out with new materials in their machines and routinely partners up for developing specific materials.

Because of the invention of 3D printing, it has gotten easier to create parts using metal injection molding. Complex parts and functional prototypes can be made in lesser time, cost, and energy than before.

However, the technology is very expensive and so are machines based on it. But with the passing of time, the cost will reduce and the technology will be more accessible.