Buying Wanhao Duplicator Mark II Gen 2 is bringing home or at your workplace a machine with a standard arrangement that will print objects to you in no time. It has an amazing set of features that are hard to find in printers available in the price range of $600.

There are three printers in the Duplicator series of Wanhao, 9 Mark II 300 Gen 2 being the smallest one in terms of the maximum build volume it offers. 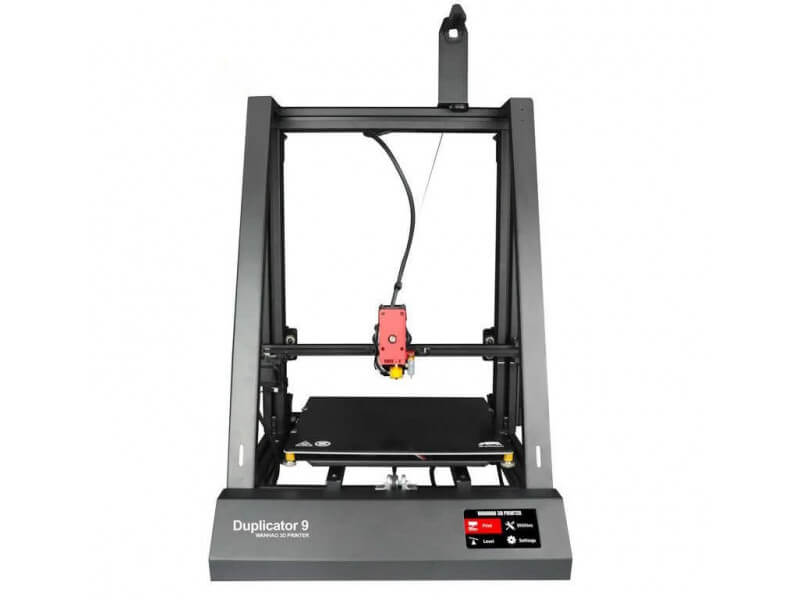 Having stated so, the printer manages to surprise you with the fabulous set of features it brings to your table. Check out the complete review to find amazing aspects of this printer.

There are tons of new features in Duplicator 9 Mark II Gen 2 like the touch screen interface, the print resume functionality, the heated bed with the full metal hot end, the anti-backlash rolling system and it goes on.

This feature gives the printer a sense of stability even while printing an object with maximum build volume.

Having stated so, let’s look at some of the not-to-miss-out-on features of this beast.

These sensors have earned a good name in the 3D printing industry when it comes to sensing the bed leveling of 3D printers.

Wanhao has relied on these sensors instead of the inductive sensors that are inefficient in sensing non-ferrite materials.

The sensors have touch-probes that can easily recognize precise distances on any solid material because of which they remain the top choice of manufacturers to switch between bed materials and adhesive aids.

Obviously, a lot also depends on the type of filament that’s being used and the models that are getting printed.

But overall, by placing these sensors in Duplicator 9 Mark II Gen 2, the printer manufacturer has assured you the maximum amount of accuracy in terms of leveling your bed.

Additionally, your efforts to adjust the screws have also been decreased with the placement of these sensors. A result of both is an increase in the overall efficiency of the printer.

Yes! You read it right. Featuring in Duplicator 9 Mark II Gen 2 is the highly functional heated bed that has latticed etchings on one side and all-time adhering PVC Mat on the other side.

These two sides can be swapped and used interchangeably. So, say you wish to continuously print two objects without cleaning the heated bed.

After printing an object with one side of the bed, you can start printing with the other side, without wasting any time.

This helps a lot, especially during mass production. Both sides are suitable for all kinds of 3D printing filaments. The bed adhesion on each of the sides is commendable.

Wanhao introduces in front of you a mix of numerous different cable neatening techniques that are completely in coordination with zipcord-like string.

What this does is, offers a permanent solution to the longtime going problem of bundling aluminum extrusion channels into single cable sets.

The zip-like cord string can be attached between the extruder cable and the filament spool holder of Duplicator 9 Mark II Gen 2.

On the crossbar, this zip-like cord string tidily tucks the extruder assembly which is one of the most obstructing things coming in way while 3D printing.

The other amazing features are RIB stabilized bars that connect the base of the chassis to the crossbar on the top.

This arrangement gives you better stability than otherwise. Especially when you are printing an object that has a higher Z-axis height than general, it would get really messy if the printer did not have these bars.

Also, they improve the overall print quality of parts or functional prototypes.

This feature permits you to print any filament that has a melting temperature under 300 degrees Celsius.

Often in FDM 3D printers, the hotend that comes with the 3D printer is not able to withstand high temperatures therefore you need to keep on changing for 3D printing with various filaments.

That’s not the case with Duplicator 9 Mark II Gen 2. Most of the common materials and even some rare ones have their melting temperature point below 300 degrees Celsius; so, you can easily print different filaments using the same metal hot end.

You can adjust the printer while the printing process is on! There are many factors that come into play while 3D printing an object and even if one of those goes wrong, it leads to print failure.

Taking this parameter into account, Wanhao has placed this system of adjustment of leveling bed during the actual 3D printing process is going on.

This is to make sure that you have got no stone unturned to get your Z-axis height as perfect as you have in your 3D model.

The printer is compatible with filaments having a diameter of 1.75 mm. It features a direct drive extruder having a 0.4 mm MK10 nozzle.

The maximum temperature that the printer’s MK10 metal hot end can withstand is 300 degrees Celsius.

Its print platform has a double-sided heated bed made of latticed glass or Wanhao Build Tak that can resist up to 100 degrees Celsius.

What makes this complete 3D printer function in the way it does is the Wanhao Duplicator 9 mainboard V1.0.

The printer does feature a touchscreen LCD for better interaction, monitoring, and control over itself.

The bed leveling system of the printer is automatic four-point leveling with BLTouch Smart 2.0.

Wanhao has put in place inside the printer a print resume functionality that lets you recover the work even after starting from a power outage.

The first glance at Duplicator 9 Mark II Gen 2 conveys the message of standard design and color.

There are high chances that you might have seen such a design many times before you’ve encountered this 3D printer.

The design type of this 3D printer is called Cartesian type and is one of the top choices of open-frame FDM 3D printer manufacturers.

Normally you have two poles-like structures at a distance apart, connecting the top of these two poles is the print head of the printer.

There are rails on these poles that help the nozzle system slide down while printing the first layer of part and then come up one by one till it has printed the complete part.

As mentioned in the features section, Wanhao has added RIL cross bars that connect the base and the top of these two poles.

The result of which is the inclined that’s visible to you from the front and the side.

Stating about the base of Duplicator 9 Mark II Gen 2 gives support to the print bed which is present at some height.

Not to forget, the touch screen user interface lets you view the settings, change them, level the bed, start the printing process, and a lot more. 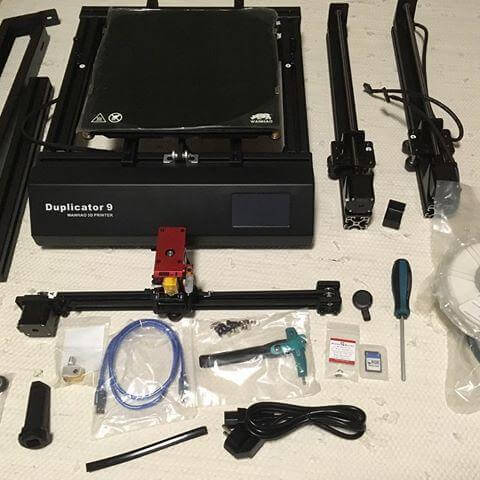 The parts that come inside the box that is delivered to you, with Wanhao D9 MK2 Gen 2 are the following.

There is a twelve-step mounting and assembling procedure starting from installing the spool holder assembly.

This followed by loading the filament and check the bed leveling of the printer and so on.

So please keep some hour’s time before planning to start 3D printing with the printer.

Once you are done with the complete procedure, install the 3D sliced file on the SD card and interact with the printer using a touch screen interface.

And it is advised to play with the touch screen interface a little before clicking on Print.

Wanhao Duplicator 9 Mark II Gen 2 is based on FDM 3D printing technology which is the simplest and widest used technique for the production of objects.

As informed in the Setup section, once you have installed the spool holder and the filament spool.

After clicking on print, the filament will start to get heated up till the arrangement reaches its glass transition temperature.

After which, it will allow melting via the nozzle system of the printer on the print bed in such a way that it creates the first layer of the geometry that is fed into the printer.

The nozzle system’s movement is in sync with the rising temperature and that’s how it manages to reach the exact location (as mentioned in the sliced file) at the same time the glass transition temperature of the filament is reached.

The first layer is laid and then the nozzle system raises exactly equivalent to the layer height offered by the printer for printing the other layer. This process is repeated till you print the complete object.

The cost of 3D printing a part of a functional prototype using FDM 3D printing is generally lower than other technologies such as SLA, or SLS. 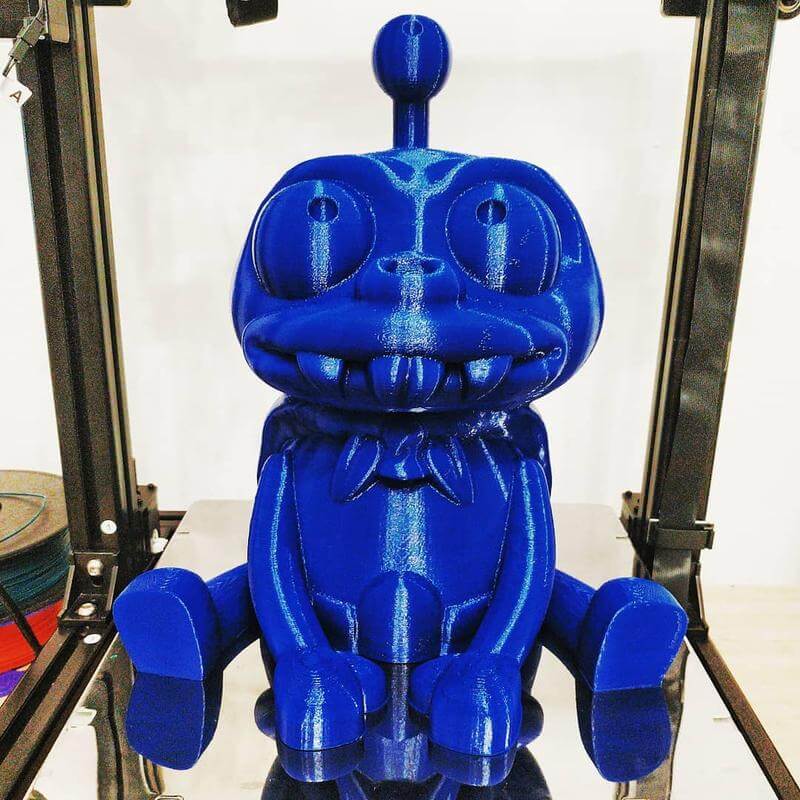 This is a decent range that you can expect the FDM 3D printers falling in a price range around $600 can offer.

Because of the automatic bed leveling, Z-axis offset, high precision sensor, good stability because of RIL crossbars, the overall quality of objects manufactured on the printer stands out from other 3D printers.

The printer is compatible with Cura, Simplify 3D, Slic3r, and Repetier Host. All of these are very user-friendly slicing software that demands not many technical skills to operate and control the functioning.

When it comes to buying, you want to be super sure and so do we. Below are few key aspects of the printer that presents you with a complete summary in brief. Check it out!

3D Printer Cost: FDM 3D printers are available at a cheaper price than this one, but then they would not offer the same build volume and amazing features as this printer does. So, if you are looking for an affordable printer that offers quality features, it’s this.

3D Print Quality: Like every other FDM 3D printer of lower price range there are some issues regarding part quality that Duplicator 9 MK2 Gen2 manufactures.

3D Printer Capability: With this 3D printer you can print with any filament that has melting point below 300 degrees Celsius.

3D Printer Practicality: Because of the RIL crossbars the printer does not vibrate during the printing process.

3D Printer User Expectations: The printer does manage to stand strong upon the expectations of hobbyists and beginners in the field of 3D printing.

Buying Wanhao Duplicator Mark II Gen 2 is bringing home or at your workplace a machine with a standard arrangement that will print objects to you in no time.

It has an amazing set of features that are hard to find in printers available in the price range of $600.

So if you are willing to try your hand at 3D printing for learning or printing domestic parts, this printer is definitely worth buying.